Accessibility links
Torrid Comics Confessions: 'I'm Cheating On The Sea-King With MARINEMAN!' Our comics blogger, a devout, lifelong Aquaman fan, shares a shameful secret: A new ocean-based superhero is turning his head - one with less emotional baggage. And bigger calves.

Torrid Comics Confessions: 'I'm Cheating On The Sea-King With MARINEMAN!'

Torrid Comics Confessions: 'I'm Cheating On The Sea-King With MARINEMAN!' 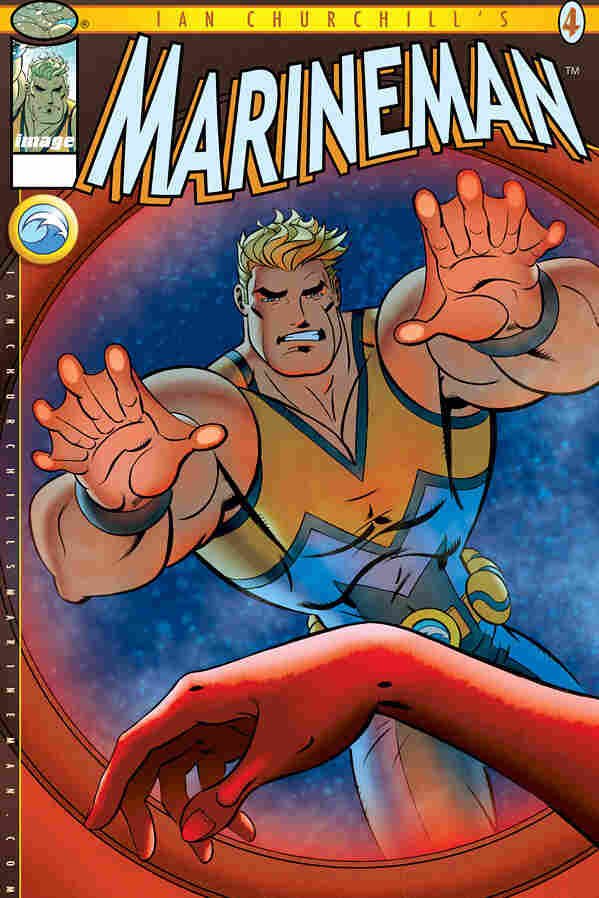 On the cover of Marineman #4 (in comics shops today) our unshellfish hero faces a difficult choice. Image Comics hide caption

Look, what me and Aquaman have shared, these many years — it's beautiful. We're soulmates, and the last thing I want to do is hurt the guy. But ... but maybe we've grown apart. Maybe we've been growing apart for some time and just never faced up to it.

All I know is that Aquaman isn't the same guy he was when I saw him for the first time, on that 1974 episode of Super Friends. He always seemed so happy, back then, so carefree, beaming out at me as he summoned, like, a jellyfish army or whatever.

It doesn't excuse my shameful dalliance, but you have to understand: The years hardened him. He lost his kingdom, his kid got murdered, he lost his hand, changed his costume, he grew out his hair and beard ... well, we've discussed it all before, all his trials and tribulations, what the '90s did to him. He grew angrier, more imperious.

For a while there, it became impossible to tell him apart from his Marvel Comics analogue, Prince Namor, the Sub-Mariner. And that, to be honest, was almost a deal-breaker for me. (I've always disliked Namor — so haughty, so arch, always cocking one of those drag-queen eyebrows at you as if you were a small, stubborn stain.)

But I stuck with my guy. He was still my Aquaman, I told myself, he was just going through a rough patch.

Okay, fine: A very rough patch. So, as I'd done several times before, I paced my nerdy widow's walk and kept my lonely vigil, awaiting his return.

And suddenly (in last year's Blackest Night #8) he was back! Clean-shaven! Two-handed! And back in his old costume, the one he was wearing when we first met!

Ready to Take a Chance Again

Surely that was an omen — a sign that we were going to get a second chance, the two of us. We'd make it work this time. We'd recapture the young, wild, impetuous spirit that had brought us together, and ...

And then it turned out he could only summon ... zombie fish. (Brightest Day #1) Man, I wish that were a euphemism.

And then his hand got chopped off. Again. (Brightest Day #19)

And then, just a couple weeks back, he died or something. Still, again, some more. (Brightest Day #20)

So when, in my grief and confusion, I saw Marineman #1 on the comic book stand, its eponymous hero staring up at me, looking all blond and buff and ... maritime, smiling that matinee-idol smile that Aquaman used to smile, all those years ago...

I ask you: How was I to resist?

The Not-So-Secret Origin of Aqua-Me

It was kismet: I was, from a very young age, a competitive swimmer. My teammates, in fact, nicknamed me "Aquaman" — not because I was fast (I really, really wasn't) but because I could never dive off the starting block without sinking too near the bottom of the pool.

They were such cut-ups, those guys.

I wore their derisive nickname like a badge of honor, devouring reruns of the 1960s Aquaman animated shorts. I never missed an episode of Super Friends. Inevitably, my fixation with aquatic heroes expanded to the real world: I started watching Jacques Cousteau specials obsessively, built scale models of Cousteau's ship Calypso and memorized long passages from his coffee table book, The Ocean World.

By age 10, I had resolved to become a cetologist (a marine biologist specializing in whales and dolphins). At 13, I dragged my family to the just-opened Baltimore Aquarium, and stocked my home aquariums with fresh and saltwater fishes. At 14, I was the youngest person in my dive class, and — I found out later — the youngest diver my instructor had ever certified. Later, I interned at the National Aquarium in Washington, DC, and dove in Fiji and the Solomon Islands.

Eventually, I somehow eked out an undergraduate degree in Marine Biology, all the while demonstrating a truly appalling lack of aptitude for requirements like Calculus I, Calculus II, Organic Chemistry, Physics I, Physics II, Quantitative Analysis, Chemical Oceanography, and Physical Oceanography. My mild form of color-blindness transformed a harmless-seeming course called Intro to Phycology — which required students to identify, on sight, various forms of green algae, red algae, brown algae and blue-green algae — into a slimy hellscape of reddish-brownish-greenish frustration and despair.

In the end, all that math and seaweed proved too much for me. I gave up on Marine Biology, but I never gave up on Aquaman. He embodied everything I'd loved about it (high adventure in a strange and beautiful undersea world) and none of the things I'd despised (isohalines and Avogadro's number).

But then, as I say, Aquaman began to change. He grew darker, more distant, he seemed increasingly distracted and bitter. 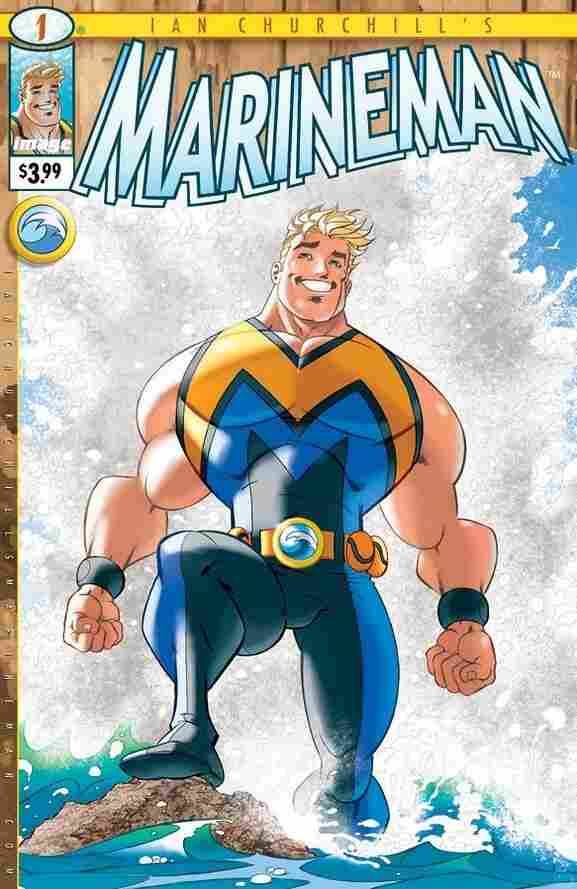 Why MARINEMAN Has Given My Life New Porpoise

I admit it: When I picked up that first issue of MARINEMAN, the recently launched comic written and drawn by Ian Churchill (#4 hit comics shops yesterday), it was because he reminded me so much of my Aquaman, in happier times.

How goofy, that goofiness? Put it this way: His name's Steve Ocean.

(If you can get through the next 24 hours without once saying that name out loud — "Steeeeeve OCEAN!" — you've got better impulse control than I do.)

As introduced in issue #1, Steve's just your average (albeit uber-muscular) undersea explorer/documentarian. But as the series progresses, we — and the rest of the world — learn his secret: He's actually an impossibly strong, water-breathing, echo-locating super-type guy with a mysterious past that may or may not have something to do with the ruins of ancient Atlantis (it's early yet).

Churchill draws two-page spreads you want to swim around in: Vast and gorgeous seascapes; eagle-eye views of our hero's HQ (a Sea-World/Woods Hole hybrid of the sort that young, wannabe-cetologist-me used to fantasize working for); even Marineman's swingin' seaside bachelor pad — stuffed with so many nautical tschotchkes it makes your local Red Lobster look like an IKEA cafeteria — is lovingly evoked.

And MARINEMAN is clearly a labor or love: Churchill, a fellow marine biology geek, infuses his narrative with obscure undersea-science facts; what's more, he devotes the last few pages of each issue to profiling the work of a real-life marine scientist.

The downside? In his efforts to evoke the innocent, idealized storytelling of a simpler, bygone era, Churchill risks reproducing its failings: His supporting characters remain broad types, and Marineman himself can seem stiff and colorless. But again: It's early yet, and as he adds layers to his narrative, here's hoping he'll find room to add nuance and roundedness to his cast.

Look, I still love Aquaman. We've been through too much together to throw that love away, and once he shakes off this whole "being dead" thing again, I'm sure we'll get back together.

But in the meantime, I'm with Marineman. And it's good. And it's real. He makes me happy. And although the City Fathers may stroke their beards and cluck their tongues, I'm not giving him up.