Accessibility links
Chicago's Silent Watchmen Guard School Route One of the most dangerous times of day for teenagers is after school. That's especially true in the gang-infested neighborhoods of Chicago, where police and school officials are enlisting military veterans to help protect kids on their way to and from school. 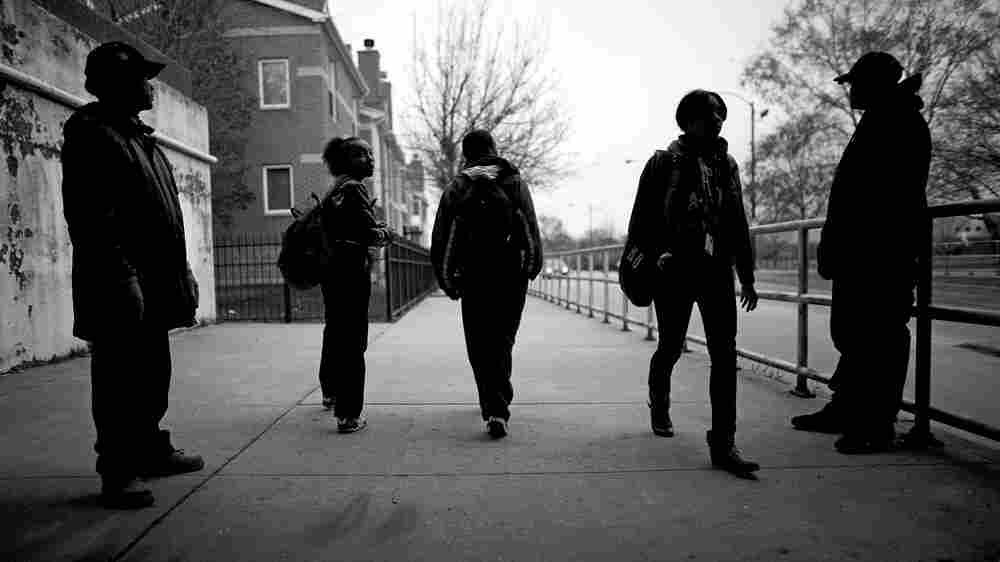 Chicago Public Schools' Safe Passage program places adults along the routes students take to and from school to keep an eye out for trouble. David Gilkey/NPR hide caption

Like a lot of parents, Gretta Campbell worries about her 17-year-old daughter, a senior at Chicago's Hyde Park Academy High School on the city's South Side — especially right after school.

After all, one of the most dangerous times of day for teenagers is after school, and that's especially true in the gang-infested neighborhoods of Chicago, where police and school officials are using federal stimulus funds to try to better protect kids on their way to and from school through a program called Safe Passage.

"My daughter ... walk[s] up and down these streets and I'm really concerned about the crime and the violence that's happening these days with our youth," Campbell says.

Campbell notes that it's not just Mom who's concerned — her daughter is worried, too.

"She knew a little boy that was shot and killed here, and that really hit hard," Campbell says of her daughter. "That really got next to her after her friend was killed here, so she does have a lot of concern walking back and forth to school."

A New Look At An Old Problem

Hyde Park Academy Principal Thomas Trotter says he is sensitive to what his students are going through.

"If you're a kid growing up in Chicago and you travel from Englewood to Woodlawn, you go through different gang territories, so they're a little bit alert or on edge in terms of making sure they get here safely and get back home safely," Trotter says. "That's always a concern."

And such concerns are nothing new — they actually date back decades. Getting to and from school in Chicago and other cities has sometimes been perilous for young people, but after-school violence began to increase a few years ago in Chicago after school officials closed several dozen schools and students began having to go through different neighborhoods to get to new schools.

Then, in September 2009, a brutal after-school street fight between teens from opposing neighborhoods was captured on cell phone video. The video showed the beating death of honor student Derrion Albert, and it soon went viral. After that, Chicago police and school officials ramped up the Safe Passage program.

"If the school officials notice that there's a problem brewing in the school," Weis says, "that information is passed informally, immediately over the telephone to our command staff, and then we can take those measures necessary to curb the violence should that problem continue on out into the community."

School and police officials have also beefed up security, especially at the end of the school day.

At 2:36 in the afternoon, the dismissal bell rings and most of the 1,800 or so students at Hyde Park Academy head for the high school's main exit under the watchful eye of at least a half-dozen security guards.

Once outside, the students are greeted by a heavy police presence, including a handful of blue and white Chicago Police SUVs, squad cars and close to a dozen police officers who keep them moving along to their buses, waiting rides or walks home.

A police helicopter often flies over potential hot spots for after-school violence around the city, and tactical police units can be moved to certain schools or neighborhoods in anticipation of possible fights or shootings based on tips from gang- and school-based intelligence.

But Weis acknowledges that such a heavy police presence can be jarring, especially in communities where many kids don't trust police.

"We don't want to live in a police state," Weis says. "I think whenever we can gain the cooperation of the community working with the police, we have a very viable deterrent to gang violence."

Chicago Public Schools is spending nearly $5 million this year on contracts with community groups and other nonprofits to provide people to stand guard along the routes students take to and from school in the city's most dangerous neighborhoods.

About an hour before dismissal time, a group from the organization Leave No Veteran Behind gathers in an unused Hyde Park Academy classroom. Group leaders go over the locations the dozen or so teams of two will be dispatched to. They run down any information they get from school staff or police about what they need to be watching out for — from certain gang tensions to suspicious vehicles — and they're handed two-way radios so they can quickly communicate trouble if they see it.

Retired or out-of-work military veterans, along with a few parents, are paid about $10 an hour to stand watch on corners and side streets, looking for signs of trouble for a few hours before and after school. 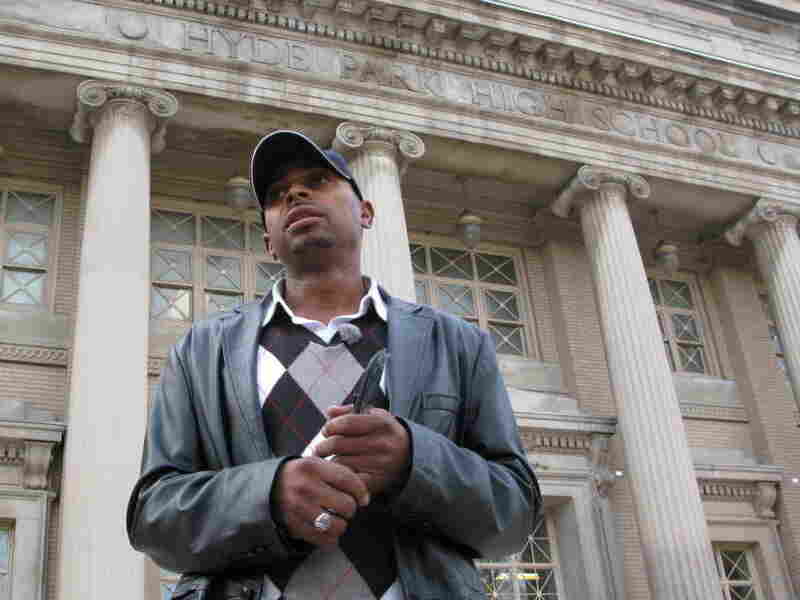 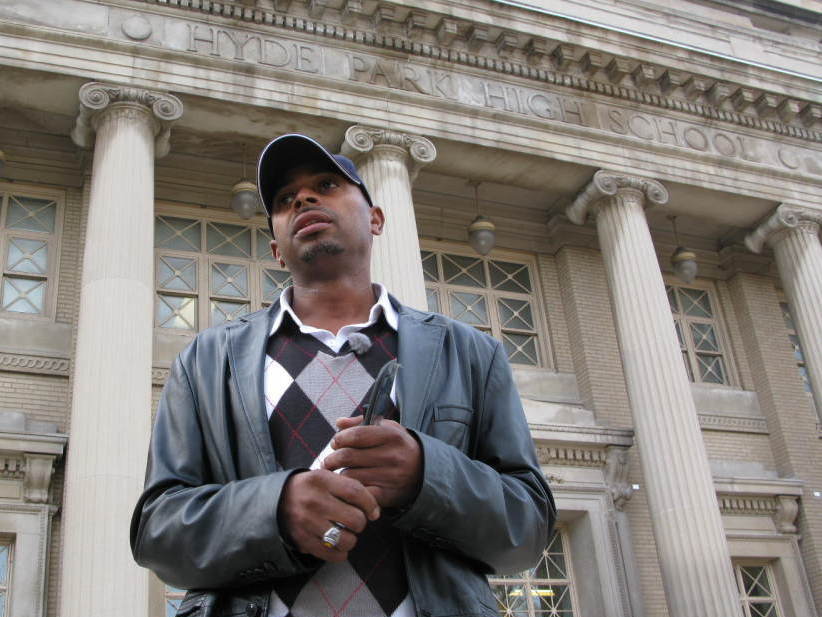 The group's Safe Passage coordinator, Herman Rainey, leads the band of mostly middle-aged and older veterans through the school's hallways and out the front door about 15 minutes before the bell. Once outside, they fan out along the routes the students will be walking, to various corners and potential trouble spots, including a long railroad viaduct along 63rd Street.

"You know, you can get mugged in broad daylight in here," says veteran Bernard Cooks, who is posted at one end of the viaduct. He watches younger children coming from a nearby elementary school cross paths with the teenagers coming from the high school.

Cooks says his job is to simply observe and report. Those who work on Safe Passage at Hyde Park Academy and other high schools across the city are advised not to get physically involved if trouble breaks out, but there's little doubt some of these veterans could, if necessary.

Cooks served four years each in the Army and the Air Force in the 1980s, but he says he's not here to be part of a show of force. Instead, he says, they let the kids know they're there and they've got their backs.

"We're here faithfully; we've been here since day one," Cooks says. "Our intention is to be here until the last day so kids can figure out that, 'Hey, there's somebody that actually cares about our safety,' and they can feel confident going up and down these streets."

There are concerns that responses such as Safe Passage — which promote a heavy police or adult presence in some areas — only push violent activity further away and address the symptoms of youth violence while overlooking the causes.

But Principal Trotter says the kids have taken notice. He says the number of after-school fights and other incidents around Hyde Park Academy have dropped substantially since the veterans started working for Safe Passage.

And besides, he likes the quiet, calming presence provided by the guys from Leave No Veteran Behind.

"They don't say a lot; they just watch. They don't get in the way; they just watch. And it's amazing because in the mornings I come early and I see those guys there, and it's almost like they're there, but they're not there," Trotter says. "I think there's some power in silence."