Accessibility links
On Broadway, A 'Mormon' Swipe At ... Everything The guys behind South Park teamed with a co-creator of the smutty puppet musical Avenue Q to write a musical about Mormon missionaries in Uganda. Will theater ever be quite the same? 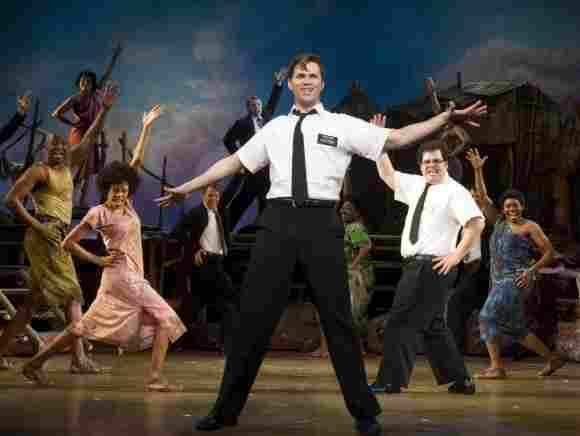 Andrew Rannells (center) and Josh Gad are two missionaries out of their depth in Northern Uganda in The Book of Mormon -- a new musical comedy from the creators of South Park and one of the men behind Avenue Q. Joan Marcus/ hide caption 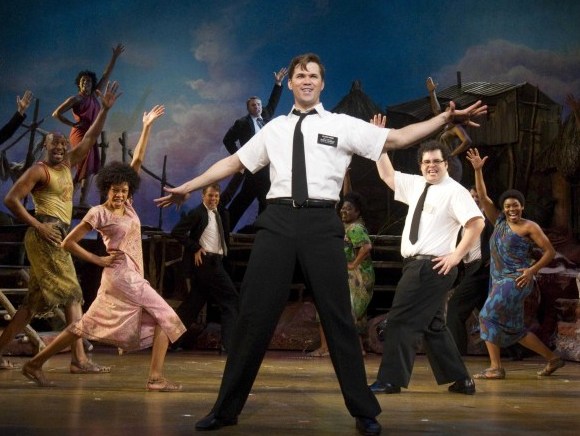 Andrew Rannells (center) and Josh Gad are two missionaries out of their depth in Northern Uganda in The Book of Mormon -- a new musical comedy from the creators of South Park and one of the men behind Avenue Q.

The most offensive show on Broadway was born out a special kind of love.

"Mormonism has sort of been the little thing that's fascinated us the most," says Parker.

This will come as no surprise to South Park fans, who've watched Mormon prophet Joseph Smith fight an evil David Blaine. In another episode, Satan reveals that only Mormons have made it to heaven. As much as these two guys love to skewer religion, Mormons on South Park come off as supernice — if a little gullible. And Parker says there's a reason.

"It is an example of a religion that's American and young," he says. "And that we can look at and say: 'All right, why did this catch on?' "

It's this question that propels the duo's first Broadway musical, The Book of Mormon. 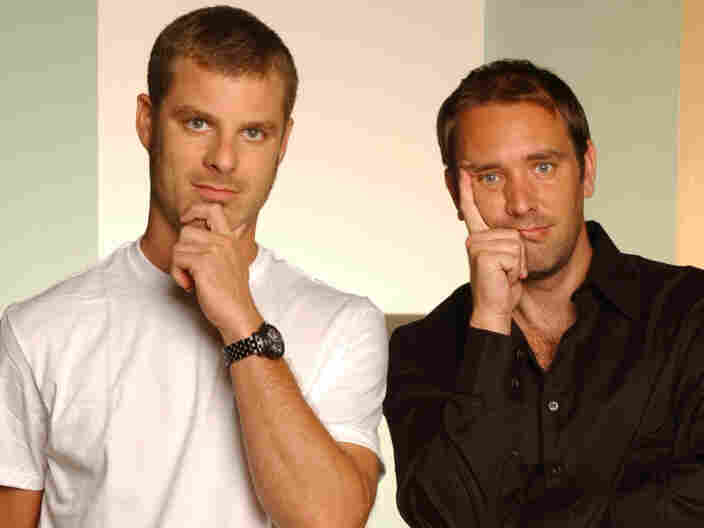 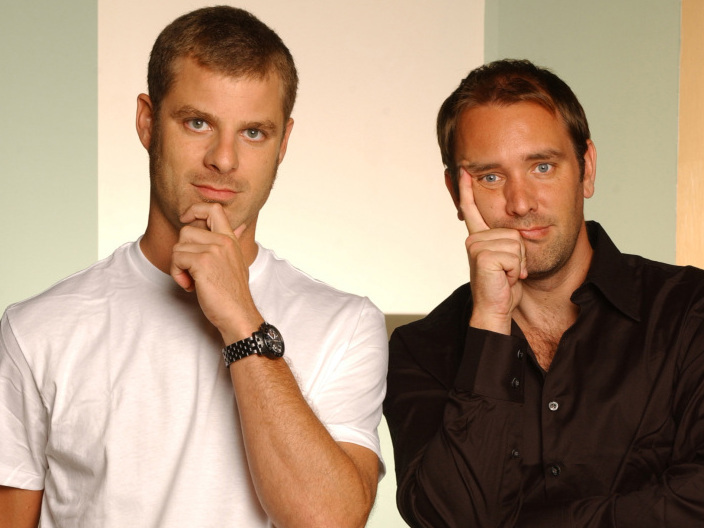 Famous for blending potty humor and cultural satire on South Park, Matt Stone and Trey Parker began working on The Book of Mormon seven years ago.

Despite a title ripped from a sacred text, the musical has no affiliation with the Church of Jesus Christ of Latter-day Saints. And it isn't a dramatization of the visit of Jesus Christ to America, recounted in that book.

Instead, it's an oddly sweet musical peppered with filthy jokes.

Parker says that when he and Stone first started to work on a Broadway musical seven years ago, they kept coming back to the topic of Mormons.

"The Mormons give you such an excuse to be cheesy and Rogers and Hammerstein," he says. "Because you can have Mormons dancing around and doing things and being super-optimistic."

The masters of crude animation needed some help with the world of Broadway, so they collaborated on words and music with Robert Lopez, the co-writer of the smutty puppet musical Avenue Q. And needless to say, when three of the funniest and most wicked writers around said they're working on a musical about religion, people started to wonder how far they would take it. Were they really going to take a holy text and mock it onstage for $100 a ticket? 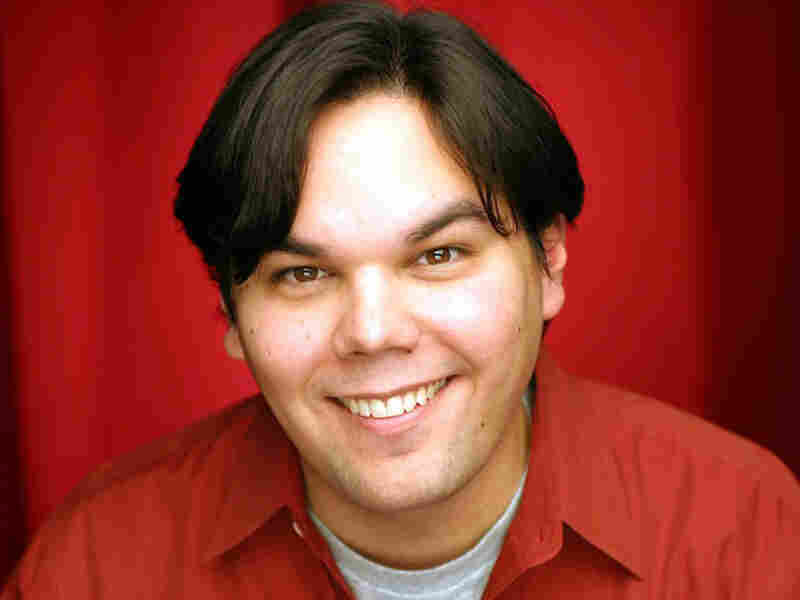 Stone and Parker recruited Robert Lopez, one of the minds behind Avenue Q, to help write songs for the show. hide caption 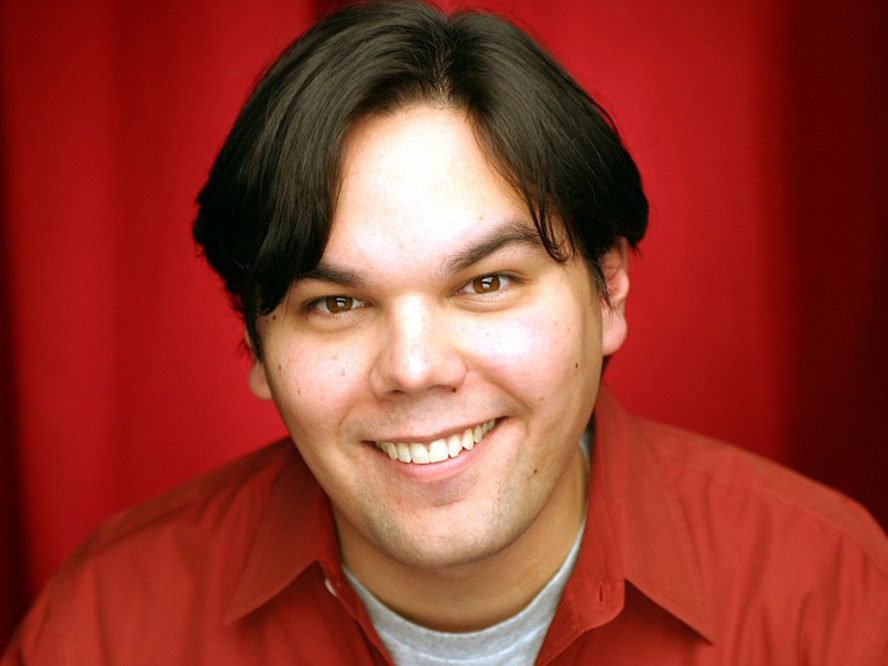 Stone and Parker recruited Robert Lopez, one of the minds behind Avenue Q, to help write songs for the show.

Parker answers the question before it's even asked.

"We don't hate Mormons!" he says. "We weren't ever going to set out to do this two-hour-long Mormon-bashing. We set out to create a traditional musical in a lot of ways. "

The Book of Mormon is a classic odd-couple/fish-out-of-water story. Two Utah missionaries are sent to a remote village in Northern Uganda. One is the perfect Mormon, convinced that with charm and faith he can convert a whole continent. The other missionary is a lovable screw-up who hasn't even made it all the way through the scriptures.

But this is no Lion King. The village is bleak. A brutal warlord threatens everyone. And the two missionaries find that the story of a prophet in upstate New York isn't exactly connecting with the locals.

A perfect example of the humor in the show comes during the big village number — think "Hakuna Matata," only in this case the locals are singing "Hassa Deega Eebow Wai."

The missionaries dance along with the Ugandans until they discover what the words mean. The villagers are actually telling God what he can go do to himself.

And make no mistake: AIDS jokes are just the beginning of the provocations. There are jokes about cancer, domestic violence, child rape. There's a running gag about female circumcision, and another about maggots. There's a big dance number set in a Mormon hell, complete with Jeffrey Dahmer, Johnnie Cochran and two forbidden cups of Starbucks coffee.

After that list I don't expect you to believe me, but in the end the least offensive part of the musical might just be the way it treats the Mormon faith.

Elna Baker, a Mormon writer and comedian in New York City, laughed through the whole thing.

"The South Park team and Bobby Lopez did an amazing job of picking a checklist of all these things that are very particular to Mormon beliefs, and they nailed every single one of them," she says.

They skewer the story of Joseph Smith digging up the Golden Plates. There is a shout-out to the current president of the church, Thomas S. Monson. They take a couple of potshots at the Mormon doctrine that kept blacks out of the priesthood until 1978.

"There's a line where they say, 'I believe that God lives on a planet named Kolob,' " Baker says. "That is an actual Mormon belief. We do believe that. But taken out of context — or in context — you do not want anyone to know you actually believe it."

But here's where the sweetness comes in. The Mormons in the musical embrace every quirk of their faith. It makes them stronger, and in the end the audience that laughed at them is won over.

It's a lesson in "what it requires of you to still believe those things," Baker says, when "the whole world is against you and against your ideas.

Now just to be clear, Baker says that many Mormons, including her mother, would never make it to the happy end of this Book of Mormon. They'd walk out of the theater after the first few F-bombs.

The Church of Jesus Christ of Latter-day Saints is not giving the show any additional publicity by attacking it or picketing the theater. It released a simple statement instead:

"The production may attempt to entertain audiences for an evening," it says, "but the Book of Mormon as a volume of scripture will change people's lives forever by bringing them closer to Christ."