Accessibility links
Google: A New Tool For U.S. Intelligence? Traditional intelligence tools like wiretaps and secret intercepts didn't help U.S. officials predict the revolutions that have swept across the Middle East and North Africa. Now, officials are searching for systematic ways to use open sources — and there could be some answers in Google. 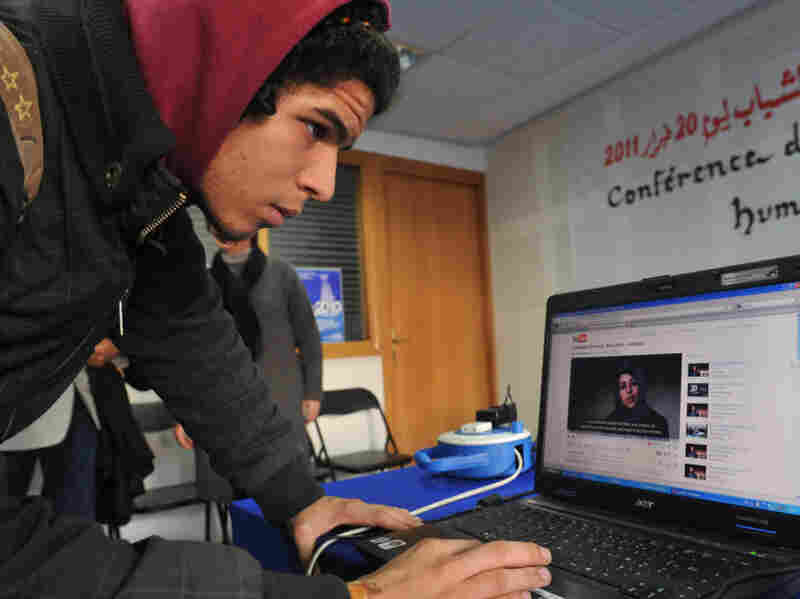 A young Moroccan watches a video on Feb. 17, calling for demonstrations. Three days later, the demonstration organized by a coalition of groups took place in cities throughout the country. U.S. intelligence officials say that in hindsight, using open sources like Facebook and Twitter could have helped them predict the uprisings that have swept the Arab world. Abdelhak Senna/AFP/Getty Images hide caption 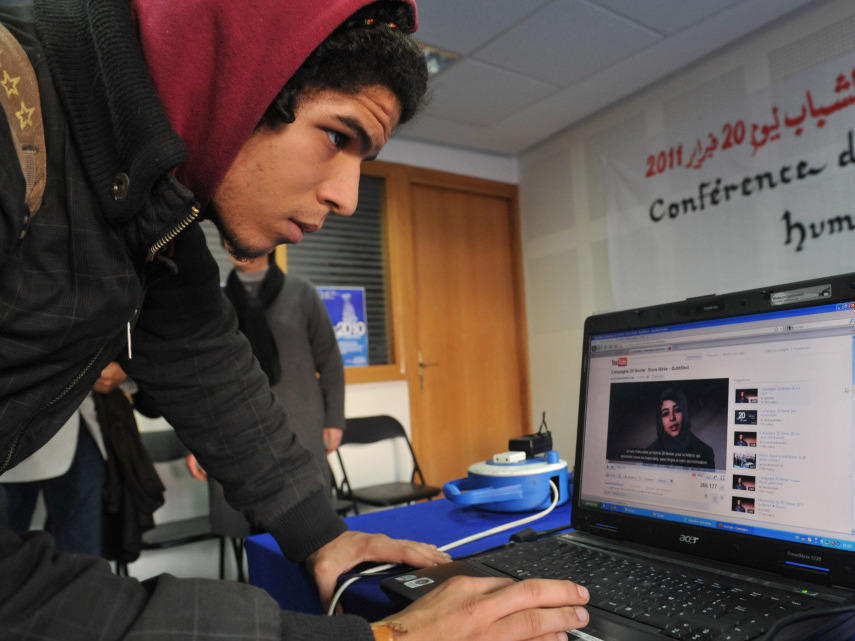 A young Moroccan watches a video on Feb. 17, calling for demonstrations. Three days later, the demonstration organized by a coalition of groups took place in cities throughout the country. U.S. intelligence officials say that in hindsight, using open sources like Facebook and Twitter could have helped them predict the uprisings that have swept the Arab world.

Traditionally, intelligence agencies have relied on top-secret information to track changes in other countries. But wiretaps and secret intercepts didn't help U.S. officials predict the Arab Spring that has brought revolution across the Middle East and North Africa.

In hindsight, officials say they could have found some clues about what was about to happen if they had read open sources more closely. Now they are searching for systematic ways to do that.

The uprisings in the region have shown intelligence officials that they need new ways to understand what motivates people around the world. While traditional intelligence tools can help, they are limited in their ability to put their fingers on the pulse of society or anticipate fickle human behavior.

Open sources include newspapers, local radio shows and, of course, Facebook and Twitter. The problem, intelligence officials will tell you, is tapping into all of that in a systematic way.

Gabriel Koehler-Derrick, an instructor at West Point, and Joshua Goldstein, a researcher at Princeton University, think they may have at least a partial solution. They are seeing if they can tap into the mood of the country by tracking what its citizens are searching for online. And the way they do that is by using the search engine Google Trends.

"What we did was a comparison of search terms over time starting from the moment the Internet was plugged back in by the government of Egypt on Jan. 25, and moving forward for a period of about 30 days to see what we could find out," Koehler-Derrick says. As he saw it, it was an electronic way of taking a very broad poll.

Google Trends is basically a way of looking at what people are focusing on by mapping out their Google searches. Marketing firms have been using Google Trends for some time. The government has, too. Back in 2009, during the swine flu epidemic in the U.S., the National Institutes of Health used Google Flu Trends to track outbreaks of the disease.

It turns out that when people started to feel feverish and nauseous, they would go to Google to check out their symptoms. While it wasn't a perfect indicator, Google Flu Trends often beat government predictions about flu outbreaks by a week or more. Imagine using the Internet to do the same thing in predicting political unrest.

Understanding The Mood Of A Country

"Google Trends allows us to get a sense of atmospherics," Koehler-Derrick says. "There are approximately 16 million Internet users in Egypt. Now, this is undoubtedly a demographic that is biased toward younger people. If you put Google's market share at 10 percent, which I think is absurdly low, then that is 1.6 million users that we have essentially surveyed for 30 days."

"Typically, as I think you'd find in the United States, pop stars trump almost any search you can think of," Koehler-Derrick says. "But the search for Tunis prior to the demonstrations that kicked off in late January were surprisingly high."

"If the decision makers could have understood how little the Muslim Brotherhood was animating the online searches inside of Egypt," Sawyer continued, "how might it have led to different decisions or different discussions, at least, that were being held in the halls of Washington?"

In other words, few seemed interested enough in the Muslim Brotherhood to search for them on Google. So how much of a role could the group have been playing in day-to-day conversations in Egypt?

Still, Google Trends can't predict the future. But it could be one more tool for intelligence officials who want to tap into the private conversations that could spark popular movements.

The audio and a previous Web version of this story incorrectly said that Google Flu Trends was launched in 2008. It was actually started in 2009.