Accessibility links
Life Yields to Love in Dvorak's 'Rusalka' A water nymph sacrifices her immortality for the love of a prince, only to be rejected. But somehow, this fairy-tale inspired opera still has a romantic ending, if not a happy one. 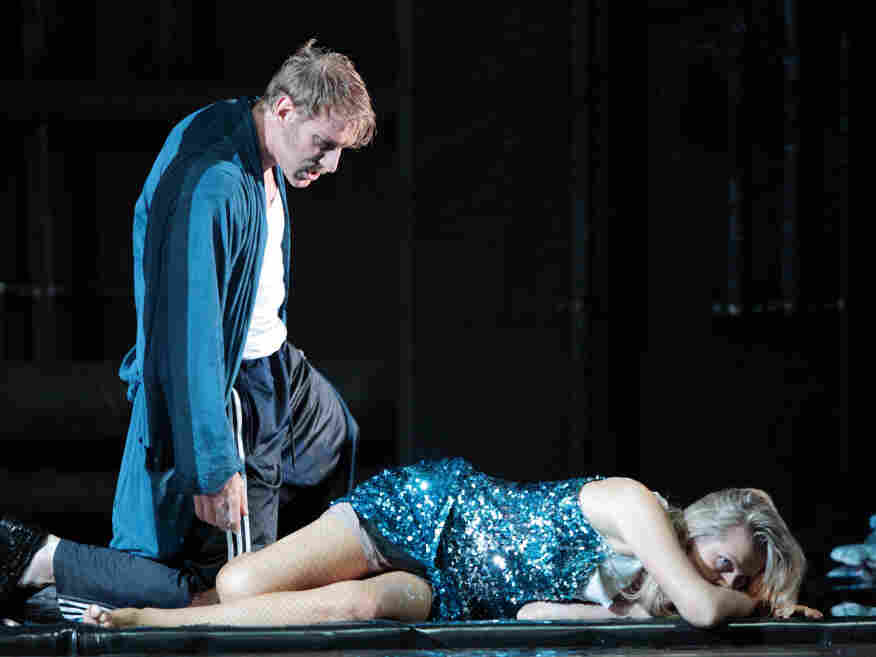 Rusalka (Christine Opolais) gives up her immortality for a chance at love with the prince (Klaus Florian Vogt) — but she's not the only one who has to make the ultimate sacrifice. Wilfried Hosl/Bavarian State Opera hide caption 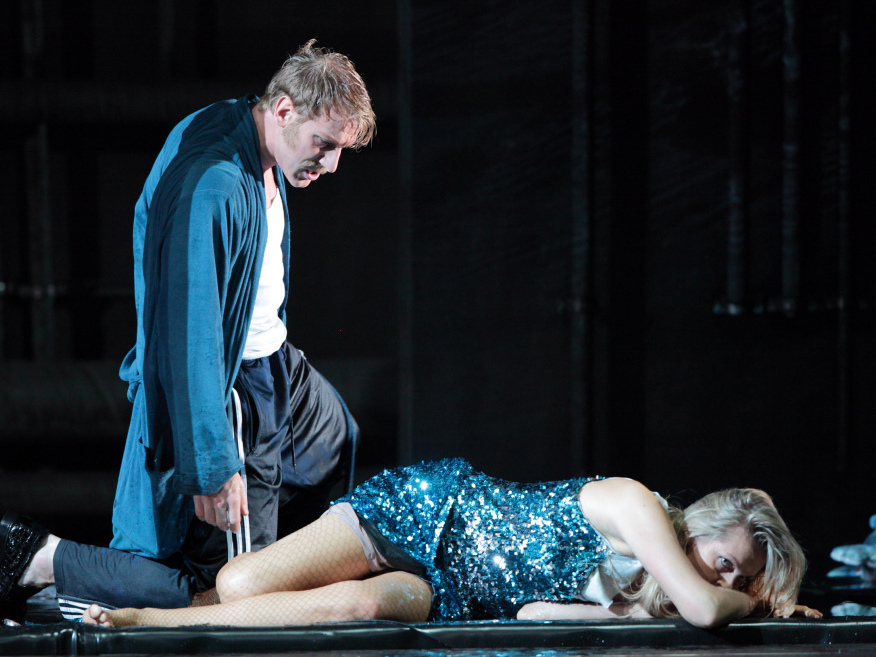 Rusalka (Christine Opolais) gives up her immortality for a chance at love with the prince (Klaus Florian Vogt) — but she's not the only one who has to make the ultimate sacrifice.

In the first act, the water nymph Rusalka (soprano Kristine Opolais) asks the all-seeing moon to send her love to the Prince, whom she's been watching in secret.

'Song to the Moon'

When novelist J. R. R. Tolkien's trilogy The Lord of the Rings became a trio of blockbuster movies, the films added an element to the plot line that Tolkien basically ignored: romance.

Composer Antonin Dvorak surely would have approved that addition; his opera Rusalka tells a similar romantic story and even takes it a few steps further.

Fans of The Lord of the Rings will recall that, in the movies, a beautiful elf named Arwen falls in love with one of the story's heroes, Aragorn. But there's a catch — a big one. As an elf, Arwen is immortal, while the very human Aragorn is not. For the two to be together, Arwen must sacrifice her own immortality. She does, and love wins out in the end. It doesn't get much more romantic than that.

But imagine for a moment that the love story doesn't work out. Let's say Arwen leaves her immortality behind, only to have Aragorn fall for another woman! Could a story like that possibly have a romantic ending? In Dvorak's opera, the answer is yes.

The title character of Rusalka is a water nymph. Like Tolkien's Arwen, she's immortal, and she falls in love with a mortal man — a prince who finds himself repeatedly drawn to the quiet lake where Rusalka lives. Also like Arwen, Rusalka decides to give up her immortality to pursue true love. Unlike Aragorn, however, the prince is no hero. He dumps Rusalka, leaving her to a hellish life of eternal solitude.

Of course, there's much more to the story — the truly romantic part. The prince realizes his mistake, seeks Rusalka out, and willingly makes his own, ultimate sacrifice, to restore her immortality.

The opera's libretto is based on two, well-known sources: Friederich Fouque's novel Undine and Hans Christian Andersen's The Little Mermaid. But Dvorak truly makes the story his own. The score features some of his finest and most evocative music, giving the entire opera the dreamy feel of a fairy tale, but with an ominous undercurrent that makes the drama's transcendent ending all the more rewarding.

On World of Opera, host Lisa Simeone presents Rusalka in a production from the Bavarian State Opera in Munich. Soprano Kristine Opolais sings the title role, with tenor Klaus Florian Vogt as the prince.

The Story of 'Rusalka' 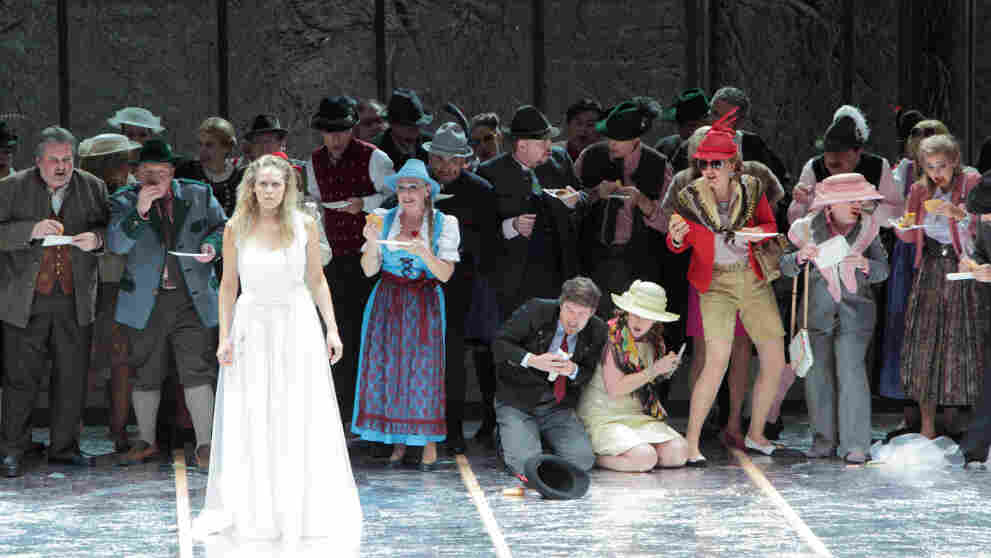 The prince wants to marry Rusalka in her human form, but no one in his court understands her strange silence. Wilfried Hosl /Bavarian State Opera hide caption 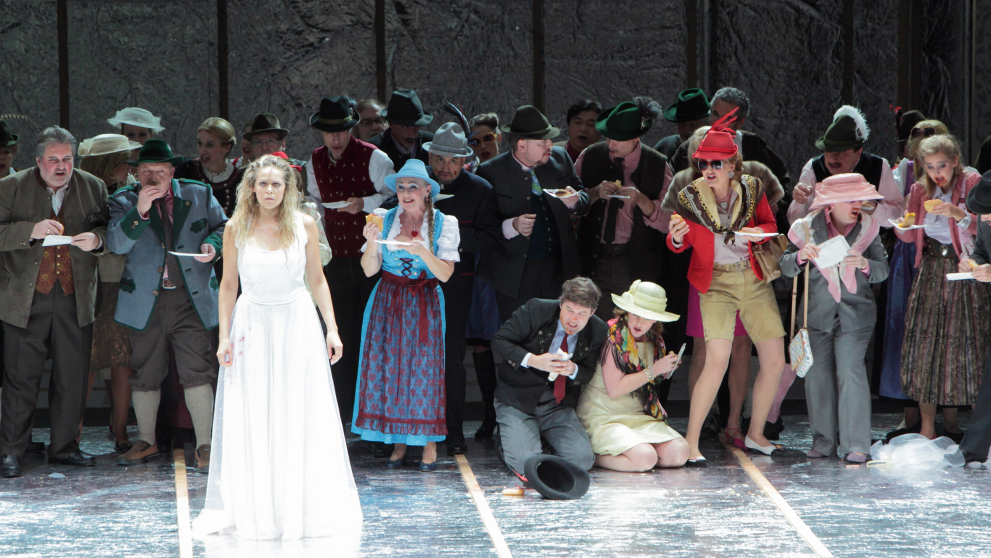 The prince wants to marry Rusalka in her human form, but no one in his court understands her strange silence.

ACT ONE of Dvorak's opera begins on the banks of a lake in the forest. Wood nymphs are teasing Vodnik, a water sprite. Rusalka, a water nymph, is one of Vodnik's daughters, and like her father and sisters, she's immortal, but only while she stays in her watery home.

Rusalka soon makes an alarming confession. She has fallen in love with a mortal man, a Prince, who often comes to swim in the lake. She's so much in love that she wonders how she might give up her immortality, and become human, so she can join him. Vodnik is horrified, but sees that Rusalka is determined. So he tells her that to become human, and actually walk on land, she'll have to visit the witch Jezibaba.

Rusalka seeks out Jezibaba, who agrees to help, but there are conditions. In return for the soul of a mortal woman, Rusalka must give up her voice — she'll be unable to speak. And if her love is rejected, she'll be cursed to live alone for eternity, luring wanderers to their deaths in the lake. Jezibaba also warns Rusalka that she really doesn't understand human love — it's not always what it seems to be. But Rusalka is convinced that her love for the Prince is strong enough to overcome all of this. She ignores Jezibaba's warnings, agrees to her conditions and drinks the potion which transforms her into a human being.

The next morning, the Prince returns to the lake, not really knowing what keeps drawing him there. This time, he discovers Rusalka sleeping in the forest. As Jezibaba warned, Rusalka's voice is gone and she can't speak to him. But the Prince is overwhelmed by her beauty and takes her back to his castle. 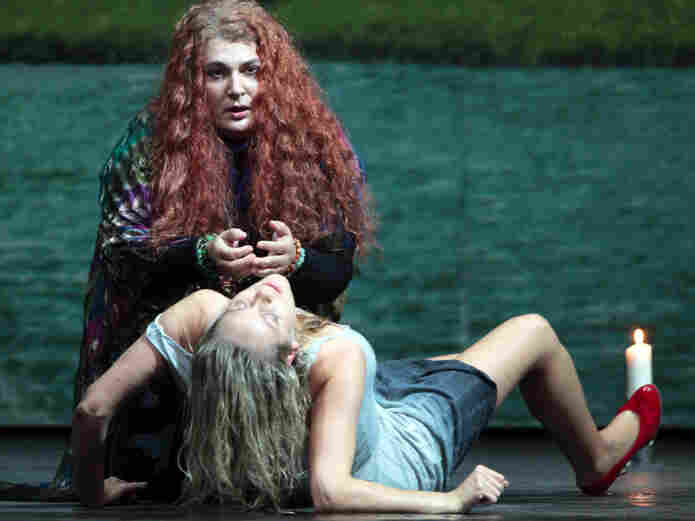 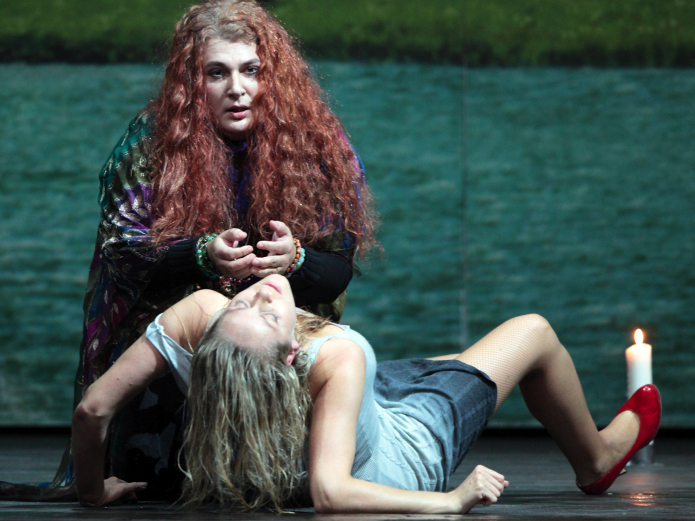 The witch Jezibaba (Janina Baechle) turns Rusalka (Christine Opolais) into a human with a powerful potion.

In ACT TWO, at the castle, things aren't going so well. Two servants, the Gamekeeper and the Turnspit discuss the Prince's strange behavior ever since he met Rusalka. The Prince is planning to marry her, but he's frustrated by her apparent refusal to speak. When he tries to embrace her, she's frightened by his passion, but he sees her fear as a sign of coldness.

Things get worse when the Foreign Princess comes to visit. She scolds the Prince for ignoring her and paying too much attention to the silent Rusalka. Other guests arrive for the wedding feast, and as the celebration begins, we also hear Rusalka's father, Vodnik, singing gloomily about his daughter's unhappy new life.

As ACT THREE begins, Jezibaba tells Rusalka that there is only one way she can return to her home and family — she must kill the man who spurned her. Rusalka refuses, and returns, alone, to the water.

Before long the Gamekeeper and Turnspit pay a visit to Jezibaba. They tell the witch that the Prince has been ill ever since Rusalka left, and ask for help. Hearing this, Vodnik angrily chases them away, cursing all of humanity.

Wood nymphs emerge from the forest, hoping to play their usual, teasing games with Vodnik. Instead, he greets them with the sad story of Rusalka's fate.

Eventually, the Prince himself comes looking for Rusalka, and the two meet for the last time. The Prince wants her back, and tries to kiss her. But Rusalka tells him that because he rejected her, if she kisses him, he'll die. The Prince says that if he can't have Rusalka, death is exactly what he wants. Rusalka can't resist. She kisses him with the passion they have both longed for, and the Prince dies in her arms. Rusalka prays for his human soul, and disappears into the lake as the opera ends.