Accessibility links
The Root: How Racism Tainted Women's Suffrage As Women's History Month winds to a close, Monee Fields-White of The Root takes a peek into the women's suffrage movement, and reveals how an 1894 showdown between anti-lynching crusader Ida B. Wells and temperance leader Frances E. Willard revealed the grip that racial resentment had over women's voting rights. 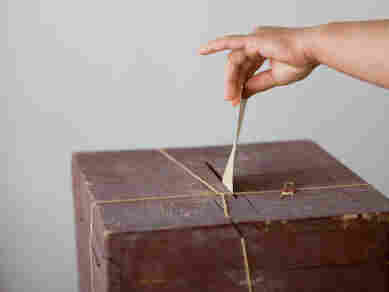 A 1894 showdown between anti-lynching crusader Ida B. Wells and temperance leader Frances E. Willard revealed the grip that racial resentment had over the American suffrage movement. iStockphoto.com hide caption

Monee Fields-White is a Los Angeles-based writer who covers a wide array of topics, including business and economic news.

"I am in Great Britain today because I believe that the silent indifference with which she has received the charge that human beings are burned alive in Christian Anglo-Saxon communities is born of ignorance of the true situation. America cannot and will not ignore the voice of a nation that is her superior in civilization."

In 1893, journalist and early civil rights pioneer Ida B. Wells crossed the Atlantic for the first time to deliver that sobering message to Great Britain. She had hoped to sway public opinion about the racial violence that plagued the U.S. The lynching of black men and women seemed to have become a sport among Southern white mobs — reaching a peak of 161 deaths in 1892.

That included the hanging of three black businessmen, one a close friend of Wells, during that year in her former home of Memphis, Tenn. She called for blacks to leave the city "which will neither protect our lives and property." More than 6,000 black residents left, and many others boycotted white businesses; Wells was exiled.

But the Memphis murders sparked the beginning of Wells' anti-lynching crusade. Combing through statistics and interviewing eyewitnesses, she conducted the first in-depth investigation into the real reasons behind the lynching of these black men — and many others who were mostly accused of allegedly raping a white woman. She wrote about her tragic findings in a column for the New York Age newspaper and forged the modern-day civil rights movement.

"Wells was one of those driven people, who never looked to the left or to the right. If something needed to be said or done, she just goes and does it," said Paula Giddings, the Elizabeth A. Woodson 1922 Professor in Afro-American Studies at Smith College, in an interview with The Root. "She doesn't worry about the consequences."

As the nation approached the 20th century, Wells saw that the spate of racial injustice needed to be addressed in a new and direct manner — through outright protest and self-defense. That challenged the nation's moralistic Victorian attitudes at the time. Such a grounded stance also pitted her against one of the most formidable American leaders within the movement to gain women the vote, or suffrage: Frances E. Willard, national president of the Woman's Christian Temperance Union.

Throughout much of the 1800s, the women's alcohol temperance movement was a powerful force in the greater push toward women's suffrage. Meanwhile, many suffrage leaders — such as Susan B. Anthony and Elizabeth Cady Stanton — had also championed black equality. Yet in 1870, the suffragists found themselves on opposing ends of the equal-rights battle when Congress passed the 15th Amendment, enabling black men to vote (at least, in theory) — and not women. That measure engendered resentment among some white suffragists, especially in the South.

To Willard, giving women the right to vote was the only way to rid the U.S. of evils of intemperance. She couched this view in the organization's mission of "home protection." It was a view that garnered her much support within the WCTU, which had 250,000 members and chapters in just about every state.

She was even willing to court white Southern women, at the expense of blacks, even though her parents had been abolitionists. " 'Better whiskey and more of it' is the rallying cry of great, dark-faced mobs," Willard said in an 1890 interview with the New York Voice. "The safety of [white] women, of childhood, of the home, is menaced in a thousand localities."

That statement and others incensed Wells. She was angered even more by the fact that Willard was considered to be a friend within the black community, in part because some of the WCTU chapters had accepted black women as members. But the WCTU president "unhesitatingly slandered the entire Negro race in order to gain favor with those who are hanging, shooting and burning Negroes alive," Wells said in her autobiography, Crusade for Justice.

Giddings, who wrote the biography Ida: A Sword Among Lions, says that Wells knew that in order to bring change, she needed to expose the truth: that too many white liberals were doing nothing to oppose crimes against black Southerners. She was also pushing to gain financial and political backing from the British people.

"Wells always understood that one of her most difficult challenges was to get the liberals in line," said Giddings. If Wells failed in Great Britain, "all could be lost."

Wells Takes Her Case Across the Pond

Wells laid the groundwork for the anti-lynching crusade in 1893, when she arrived in Great Britain for the first time. British Quaker Catherine Impey, an activist and publisher who supported racial equality, invited Wells to speak at churches and other gatherings.

Wells was also interviewed by British news publications. Just about everywhere, she was asked why she had traveled so far. Her response: "Our country remains silent on those continued outrages. It is to the religious and moral sentiment of Great Britain we turn."

While many of the British believed that lynching was a scourge in the U.S., they had a hard time believing that women like Willard could ignore the problems. They even heralded Willard as the "uncrowned queen of American democracy."

Wells had to find a way to dispel the myth. She finally got her chance to take on Willard during a second visit to Great Britain for the anti-lynching campaign. Willard was in England as the guest of Lady Henry Somerset, head of the British temperance movement. Both women were invited to speak before British temperance advocates on May 9, 1894.

Wells had to be strategic in her speech, said Crystal Feimster, assistant professor of African-American studies and American studies at Yale University, in an interview with The Root. "Wells saw that if she could nail Willard down, she would be able to harness a huge political force in the U.S."

During that era, the social sciences were being used to justify unequal treatment according to race, Giddings said. They were employed "to show that blacks are inherently inferior in terms of their blood and makeup of the body," she said. "As a result, they are less civilized and are actually regressing to a savagery."

Wells came to the lecture armed with a copy of the 1890 interview with the New York Voice that echoed such racist thinking. Willard had told the publication that the local tavern "is the Negro's center of power ... the colored race multiplies like the locusts of Egypt."

When asked her opinion of Willard, Wells chose to read the interview. With Willard at her side and little time to actually speak, Wells asked the audience how influential white women could continue to turn a blind eye to the white mobs who threatened black lives. Afterward, she was able to get a British journal, the Fraternity, to reprint Willard's interview.

Lady Somerset was so enraged by Wells' commentary that she demanded that the Fraternity article not be printed, or Wells would never be heard in Britain again. The article was published anyway. Lady Somerset also sent a telegram to black abolitionist Frederick Douglass demanding that he publicly reprimand Wells. Douglass didn't give in to Lady Somerset's demands (yet Wells later sadly noted in a letter to Douglass that he did little to fully support her overseas campaign).

The Power of the Press — and Its Limitations

Lady Somerset and Willard were not done. Pushing to publicly embarrass Wells in the press, the pair arranged for another Willard interview with the Westminster Gazette, a London newspaper. This time it was conducted by Somerset, who gave Willard a platform for her version.

Willard talked about her family background and expressed concern for the plight of blacks. But she also stated that "the best people I knew in the South" had told her black people were threatening the safety of white women and children. She continued, "It is not fair that a plantation Negro who can neither read or write should be entrusted with the ballot."

Other U.S. publications — including the Memphis Commercial — weighed in with statements against Wells' character. The Commercial examined her career, painting "the saddle-colored Sapphira" from Holly Springs, Miss., as a harlot. The newspaper also stated that Wells was pushing her "foul and slanderous" outbursts on the British.

Even so, the media campaign didn't stop Wells. She lectured to audiences in London; was invited to dinner in Parliament; and before she headed home, helped Londoners establish the London Anti-Lynching Committee. Forming this group was a clear victory for Wells in the anti-lynching crusade. It comprised some of the most influential editors, ministers, college professors and members of Parliament. To Wells' surprise, Lady Somerset joined the committee, and Willard was among the Americans who also signed on.

With the victory in hand, Wells set sail for home after a four-month campaign. She later wrote in her autobiography that the moment "was not only a boomerang to Miss Willard. It seemed to appeal to the British sense of fair play. Here were two prominent white women, joining hands in the effort to crush an insignificant colored woman who had neither money nor influence — nothing but the power of truth with which to fight her battles."