Accessibility links
Teens Exposed To Gun Violence Face Tough Road Advocates in Chicago say schools there should address school violence in their curriculum before students are shot or killed. This might help students cope with the violence. "Being shot at but not murdered or being stabbed and not killed happens at a rate 120 times higher than the murder rate among adolescents," one expert says.

Chicago has the country's third-largest school system with more than 400,000 students including preschoolers. At least 15 of those students have died by gunfire this school year. 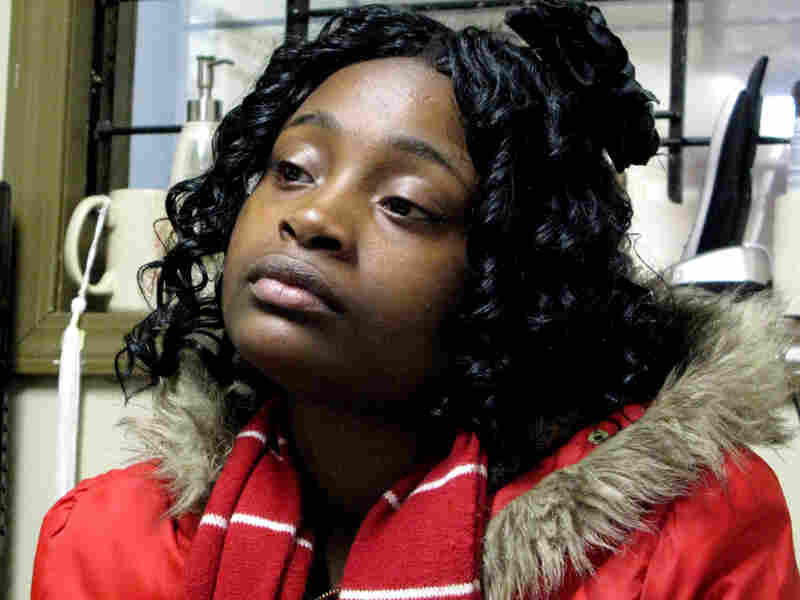 Corshana Hatter, 17, was shot six times while walking to a friend's house. She is now a part of the anti-violence group CeaseFire. Cheryl Corley/NPR hide caption

According to the Chicago Police Department, last year a total of 70 children of school age, including dropouts and non-public school students, were killed by guns. More than 600 were wounded.

Some experts say witnessing gun violence can lead to violent behavior that may perpetuate crime in at-risk neighborhoods.

But the aftereffects for survivors of gun violence can be devastating.

Corshana Hatter is slim with dark, Shirley Temple-like curls. She's been in and out of foster homes since she was 7 years old and is currently on probation for getting into an argument with police. Hatter was in Roseland — a South Side Chicago neighborhood struggling with gangs and gun violence — when she was shot last July just a few weeks before her 17th birthday.

"I was walking to my best friend's house because my foster parent had kicked me out of the house," Hatter says. "So I had to stay with my best friend until they found me a new foster home."

I thought he was laying there bleeding to death, so I was in shock. And I turned back around and that's when the boy started shooting me.

It was 11:30 p.m. and as Hatter and her boyfriend walked, they saw two people on the street. One passed a gun to the other and began shooting.

"He fired three shots at my boyfriend first. Only one bullet hit him, but I thought all of them had. I thought he was laying there bleeding to death so I was in shock," she says. "And I turned back around and that's when the boy started shooting me."

Hatter was shot six times. Twice in an arm, three times in the stomach and once in one of her legs. She is now a client of Roseland CeaseFire, a public health initiative of the University of Illinois, Chicago.

When Hatter was shot, she says she didn't know how badly she'd been hurt. Her boyfriend was able to run to his home and his mother called the police.

Hatter says she used to have dreams about being shot but never believed it would happen. And she knows the neighborhood boy who shot her.

That boy's best friend was shot one week earlier as Hatter and others sat on the porch of her boyfriend's home.

"I think he just had an anger problem and was looking for revenge," says Hatter. "He tried to shoot everyone that was on the porch that night when his friend got shot."

Being shot at but not murdered or being stabbed and not killed happens at a rate 120 times higher than the murder rate among adolescents.

For individuals who witness violence, the consequences can be severe. University of Chicago researcher Dexter Voisin studies the response to community violence. He says it is far worse for survivors.

Voisin says common aftereffects are aggression, depression, anxiety and post-traumatic stress. He believes schools should teach students appropriate ways to cope with violence — especially in neighborhoods where exposure to shooting, fighting and other violence is so high.

"Being shot at but not murdered, or being stabbed and not killed, happens at a rate 120 times higher than the murder rate among adolescents," says Voisin.

That's why he believes there needs to be ongoing attention to community violence in school curricula. Typically, Voisin says, there's only a systemwide school response after a student dies.

Despite the violence that engulfed her, Hatter says she's not worried about her safety or afraid of the streets. But she doesn't believe the violence will ever stop. "No, [because] people don't care," she says. "They don't have no feelings."

Harold Pollack, the co-director of the Crime Lab at the University of Chicago, says that sense of resignation is understandable but there is evidence that kids can overcome violence in their neighborhoods.

Pollack studies the effectiveness of youth violence intervention programs. He says it's important not to become discouraged.

"One can take a nihilistic approach to these problems and say, we've spent all this money over all these decades and it's still a problem," he says. "We've spent a heck of a lot of money on cancer research and a lot of people still die of cancer. But there are a lot of effective cancer treatments, too."

Pollack says there needs to be a realization that it will take a long time to curb violence in troubled neighborhoods.

Despite the trauma Hatter has experienced, she says she's not looking for revenge. The gun-violence survivor says she's just trying to "live my life." She has plans for college and says she would like to become a computer technician or radiologist.