Accessibility links
The Secret Bunker Congress That Never Used For 30 years, it was kept secret. Hidden in West Virginia's Greenbrier Resort was a massive bomb shelter stocked with supplies for members of Congress in case of an emergency. 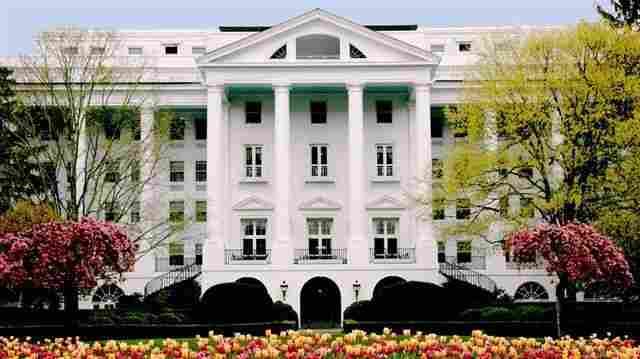 The north entrance to the Greenbrier gives no clues to a secret bunker for Congress. Courtesy of The Greenbrier Resort hide caption 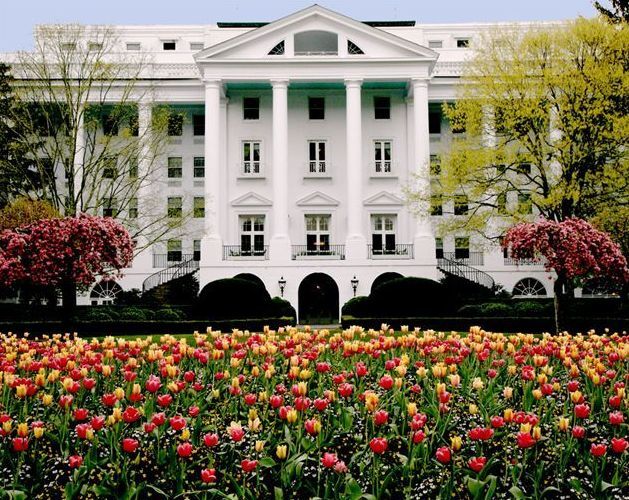 The north entrance to the Greenbrier gives no clues to a secret bunker for Congress.

Courtesy of The Greenbrier Resort

In a groundbreaking series of reports in 2010, Washington Post reporters Bill Arkin and Dana Priest revealed that 33 building complexes for top-secret intelligence work are under construction or have been built in Washington, D.C., and the surrounding area since September 2001.

Before that building boom, however, another secret bunker lay in wait for the apocalypse, behind a giant reinforced steel door. For 30 years, it was kept secret. Hidden in West Virginia's Greenbrier Resort was a massive bomb shelter stocked with supplies for members of Congress in case of an emergency.

The Greenbrier Resort And Bunker 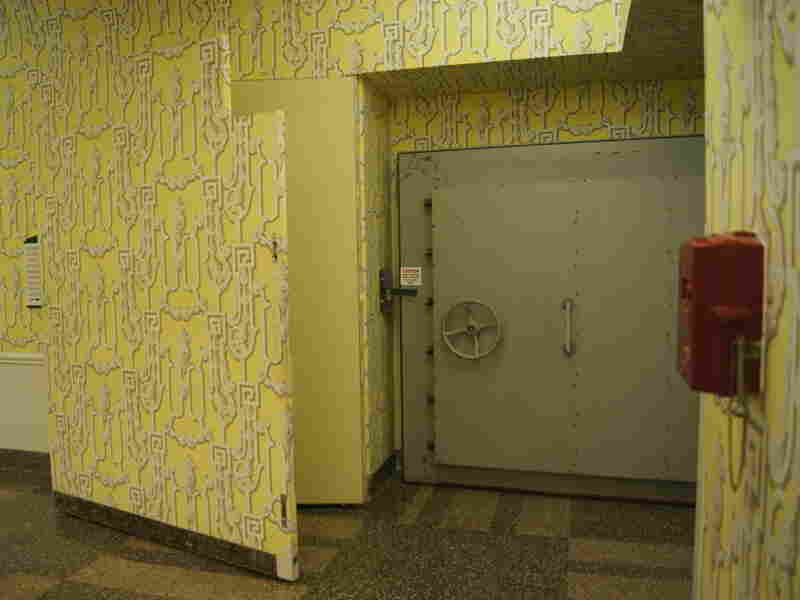 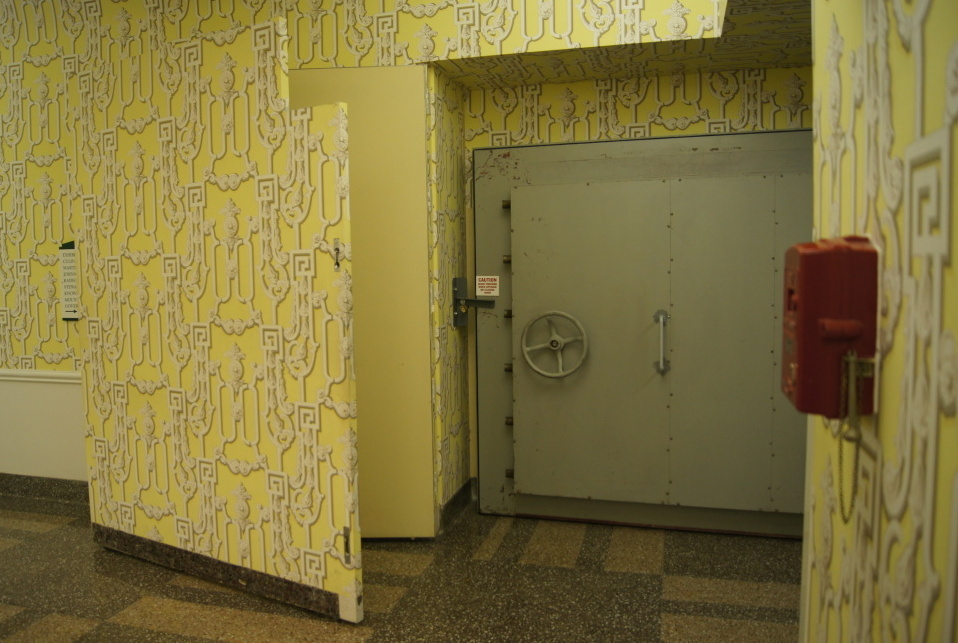 In the Greenbrier's public exhibition hall, a not-so-secret entrance leads to the bunker.

Welcome to Capitol Hill, the Day After — except this isn't Washington. It's a giant concrete box nestled into a hillside in White Sulphur Springs, W.Va.

The story of how the bunker was kept secret for 30 years and how it even got here is stranger than any conspiracy theory. For one thing, it was built as an addition to one of America's most famous luxury resorts, the Greenbrier Resort in the foothills of the Blue Ridge Mountains.

Bankers, industrialists and government advisers all hobnobbed at the resort, unknowingly right next door to the post-apocalyptic bunker. When the Greenbriar's official historian, Bob Conte, arrived in 1978, locals started badgering him with questions.

"Why is there a 7,000-foot landing strip for a town of 3,000 people?" he recounts to All Things Considered weekend host Guy Raz. Mostly, he told them there was no such thing — not that it was so "the government could fly their people in here in case of war and go to the bunker that's under the Greenbrier."

A Secret Home For The House And Senate

Thing is, Conte didn't really know anything about it. He knew every square inch of the Greenbrier's property. He had access to all the records and documents and historic photos of presidents and kings and prime ministers drinking mint juleps on the veranda. 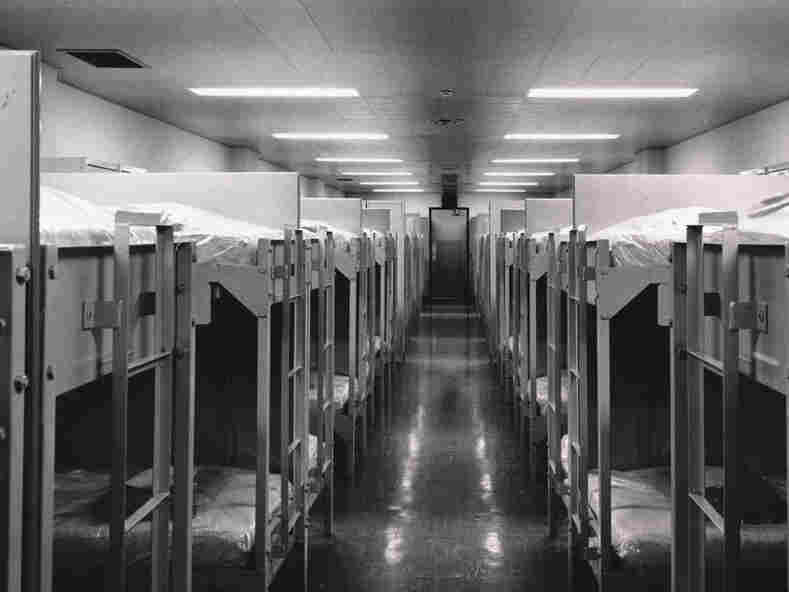 Beds line the dormitory for members of Congress. Courtesy of The Greenbrier hide caption 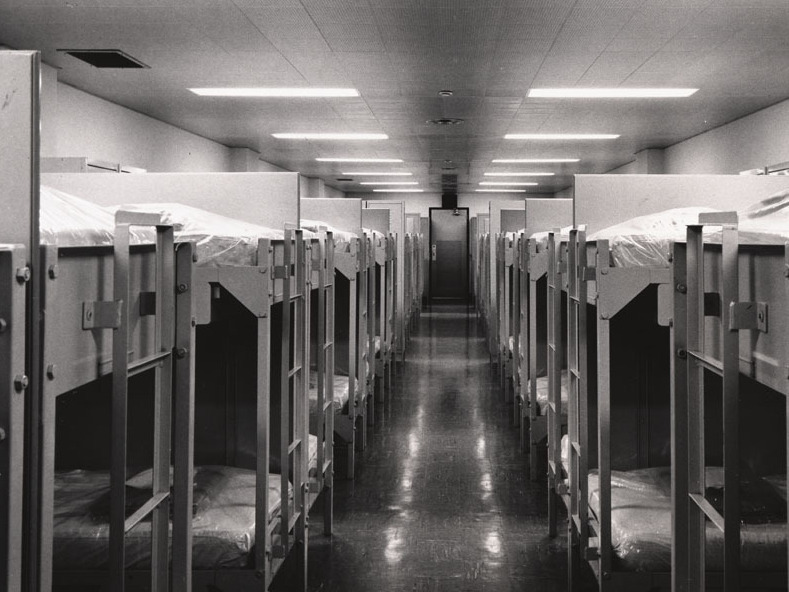 Beds line the dormitory for members of Congress.

But just a few yards from Conte's own office was the reinforced bunker that would house every member of the House and Senate in the event of nuclear Armageddon.

Behind 3-foot-thick concrete walls is a space about the size of a WalMart. The air-intake system is so intricate — it was meant to filter out radiation — that it creates a vacuum-like effect when you walk in. Wind howls around you and sucks all the doors shut.

"All they had for private items that you could lock up were a small drawer, right underneath the beds, you could put your personal items in here," Conte says. "For 30 years, every one of these 1,100 beds was assigned to somebody."

Built In An Atomic Age

To understand why and even how this bunker was built — right under the noses of America's vacationing aristocrats — you have to go back to the mid-1950s, when a whole industry built around the construction of fall-out shelters started to take off.

In the late 1950s, President Dwight Eisenhower started to worry about how to maintain law and order in America in the aftermath of a nuclear war. 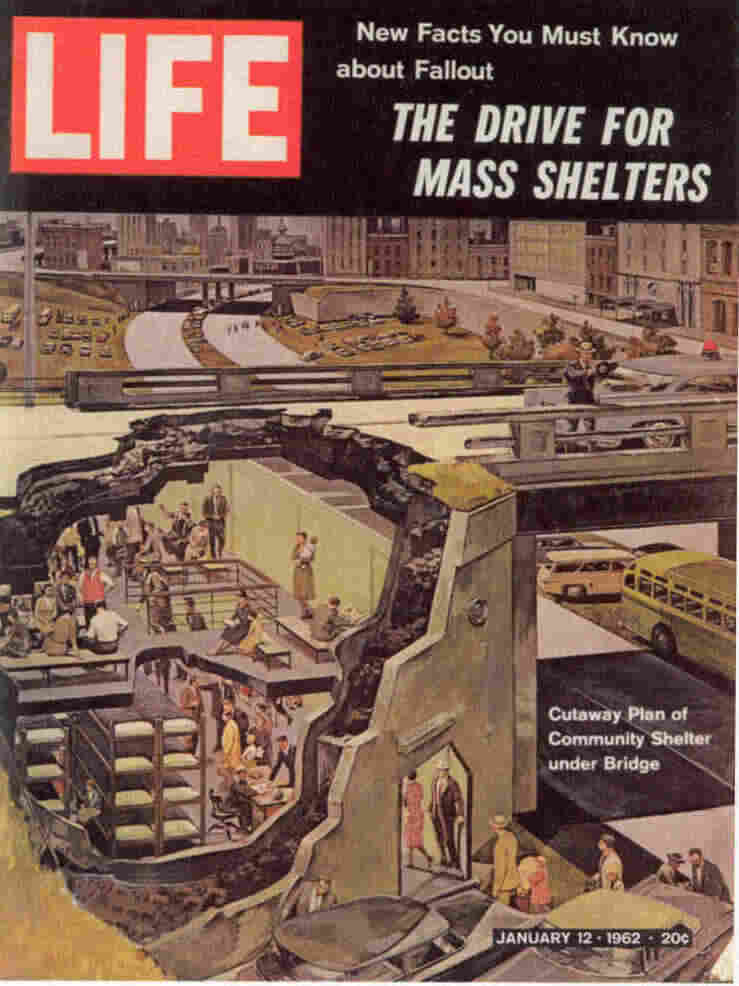 The cover of Life magazine, 1962. Courtesy of The Greenbrier hide caption 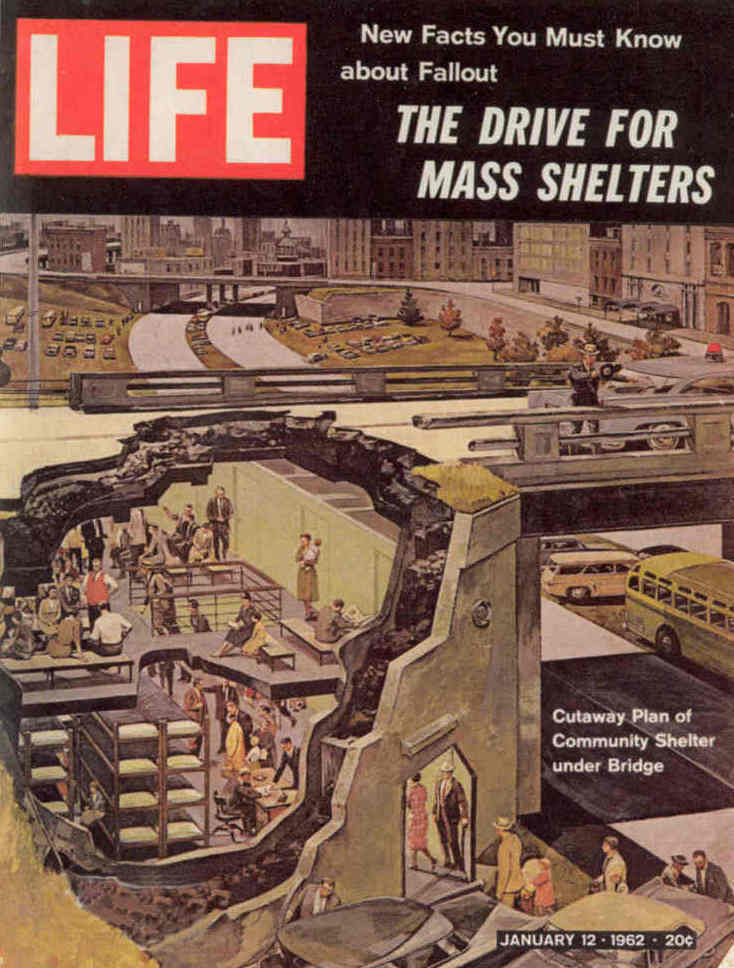 "I feel impelled to speak today in a language that, in a sense, is new — one which I, who have spent so much of my life in the military profession, would have preferred never to use," he said. "That new language is the language of atomic warfare."

Eisenhower decided the Greenbrier would be a perfect cover for a congressional bunker. In 1958, government workers broke ground on what they called "Project Greek Island."

It was just about a four-hour drive from Washington. Hotel workers and guests were told that the giant hole in the ground would house a new conference facility. In fact, it would — or at least part of it would.

"In the 30 years, thousands of people walked in and out of a secret bunker not knowing they were in a secret bunker — which was part of the original design," Conte says in a room used as an "exhibit hall."

"You would have the West Virginia Medical Association meeting here, and a lot of car companies have met here over the years," he says.

Down another corridor is a room that was to be the floor of the House of Representatives. "There were microphones," Conte says. "You can see the little metal attachments there on the back of the seats. They would attach microphones there because they would have recorded all sessions of Congress. There was a big communications center in here."

There were a few weird coincidences that Conte noticed before the bunker's existence was exposed by the Washington Post in 1992. For one, there were many, many, MANY bathrooms. And most of them were for men.

Another thing was that both Gerald Ford and Hubert Humphrey were frequent guests of the Greenbrier when they served in Congress. Conte found out later that they would have been among the few people in the world who knew about the bunker.

Finally, there was a mysterious crew of TV technicians who worked at the hotel but didn't work for the hotel. The company they worked for was called Forsyth Associates. As it turned out, Forsyth Associates was a cover: These were secret government employees who had to keep the bunker in a constant state of operational readiness. 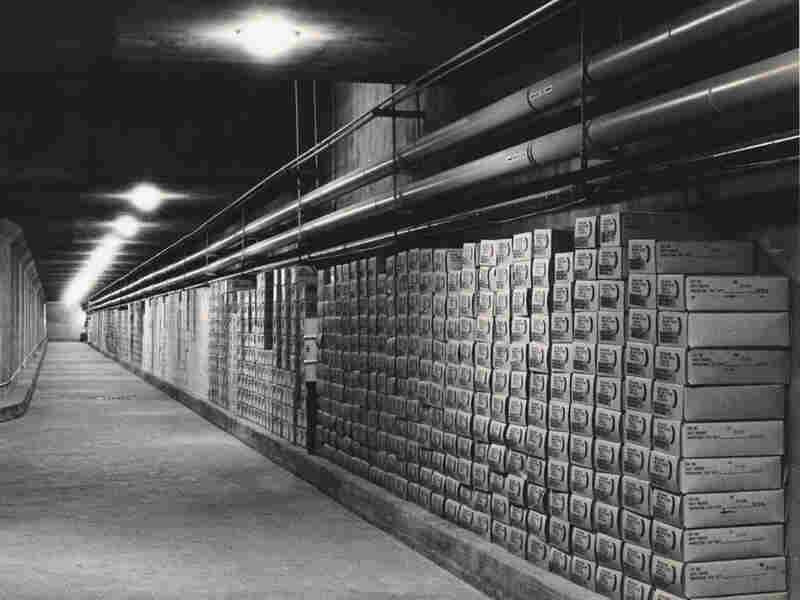 Rations stock the long entrance to the bunker. Courtesy of The Greenbrier hide caption 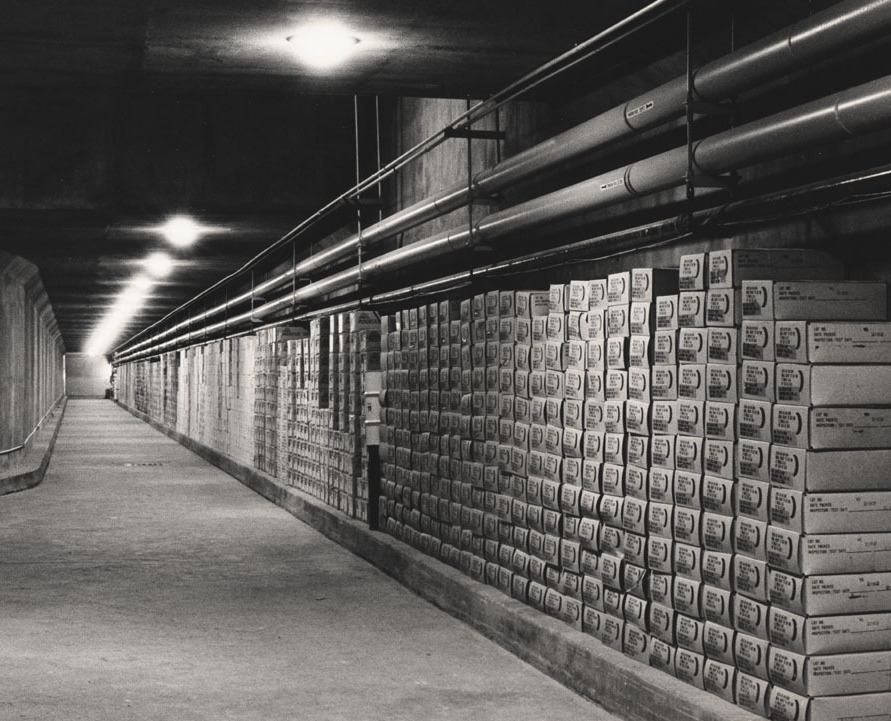 Rations stock the long entrance to the bunker.

"For that 30 years, you had to make sure all the filters were changed, all the pharmaceuticals were up-to-date, and all the food was ready to go," Conte says. That would be a six-month supply of food, periodically refreshed.

The Secret Moves On, But Not The Bunker

Today, part of the bunker is a tourist attraction. Another part is used as a secure data storage facility. Had it not been exposed in 1992, there's a good chance this would still be the secret home of the U.S. Congress.

But now that secret home is somewhere else. And, like the last one, just a handful of people know where it is. Post reporter Bill Arkin is one of them, and he's not saying.

"If you're a normal member of Congress, my guess is that you know nothing. You really know nothing," he says.