Accessibility links
Japanese School A Blessing And A Curse For Students The tsunami swallowed some of the parents of students at Kama Elementary School in the coastal city of Ishinomaki. Several classes of elementary school students who were still waiting for their parents were left stranded in the school, which has become a shelter amid the ruins. 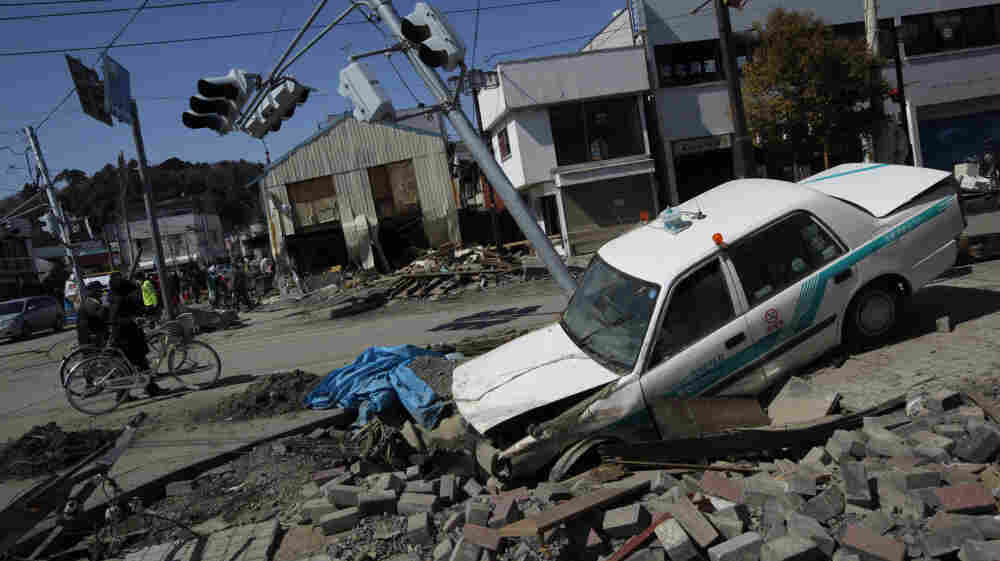 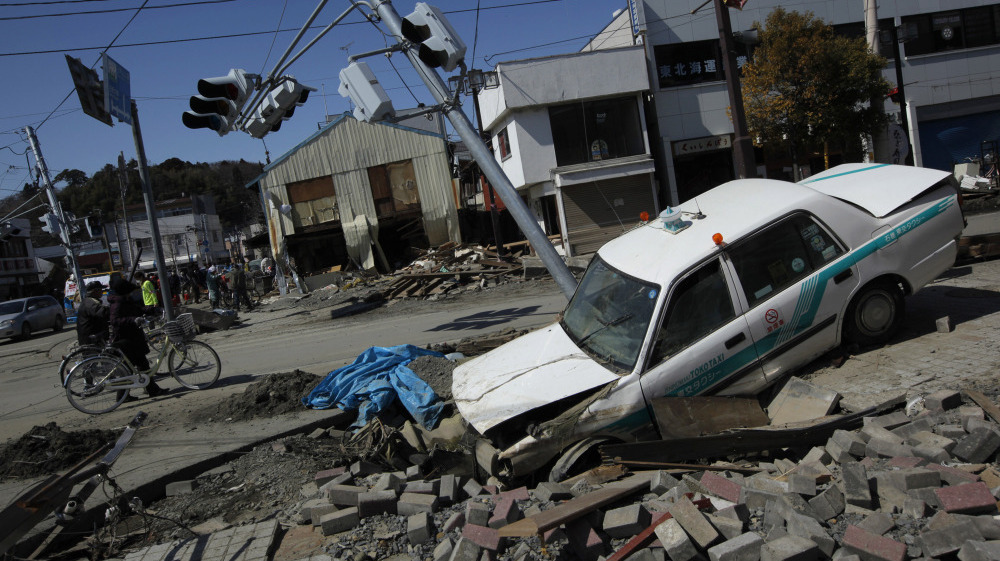 Survivors push bicycles along streets Thursday in the devastated city of Ishinomaki, Miyagi prefecture, in northeastern Japan. The powerful earthquake and resulting tsunami devastated the area about two weeks ago.

In Japan, efforts to gain control of the crippled nuclear reactor continue at the same time that hundreds of thousands of people are living in shelters and millions of people are attempting to restart their normal lives.

Officials in Japan now put the confirmed death toll at more than 10,000. Most of the deaths were due to the massive tsunami that pounded the Japanese coast.

Some of the dead are parents and students swept out of a schoolyard in the coastal city of Ishinomaki.

It was the last day of school and classes were letting out early. When the powerful 9.0 earthquake struck at 2:46 p.m., some parents had already picked up their children from the Kama Elementary School in Ishinomaki. Others were lingering in the parking lot that faces the sea. Still others were on their way to collect their kids from the school.

When the quake hit, Konno and his daughter, Kayo, raced to the school in their car. They knew that a tsunami could be coming.

Konno and his family are now living in what used to be a fifth-grade classroom.

"Here in our area, this is the closest evacuation site to where we live. We came here — came to the second floor and looked out from the second floor. Our car literally was just picked up and floated away on the tide of the tsunami," he says.

That wave swallowed parents in the streets who were fleeing away from the school with their children, as well as parents rushing toward the building to try to get their kids.

Kayo Konno and her father say some of the families who left early probably survived, but others were caught by the wave.

Several classes of elementary school students who were still waiting for their parents were left stranded in the school.

A city official who now is helping run the shelter at the building confirms that about 30 students lost their parents in the tsunami. He doesn't know how many other students may have perished as they tried to leave.

Kayo says as the tsunami pushed through the streets toward the school, the wave looked smaller than she expected.

"What we saw here from the second floor was that the wave slowly just came along and started to fill up the school. We imagine that if you were out on the coast, it would be this massive wave coming at you. But here it was much more of a slow washing over of the school," she says. "And of course it came up pretty high on the first floor. "

The water came up so high that it filled the entire ground floor. There are still watermarks above the door frames.

The Konnos and roughly 300 other people now live on the upper floors of the school without heat or electricity or running water.

Shogo Konno says for several days the children who were left behind stayed in their classrooms. The city outside was in ruins. Most of the buildings around the school are destroyed. The roads in Ishinomaki were filled with debris and mud, and weren't passable.

But eventually relatives came one by one and took the children to new lives, in new homes, in new families.