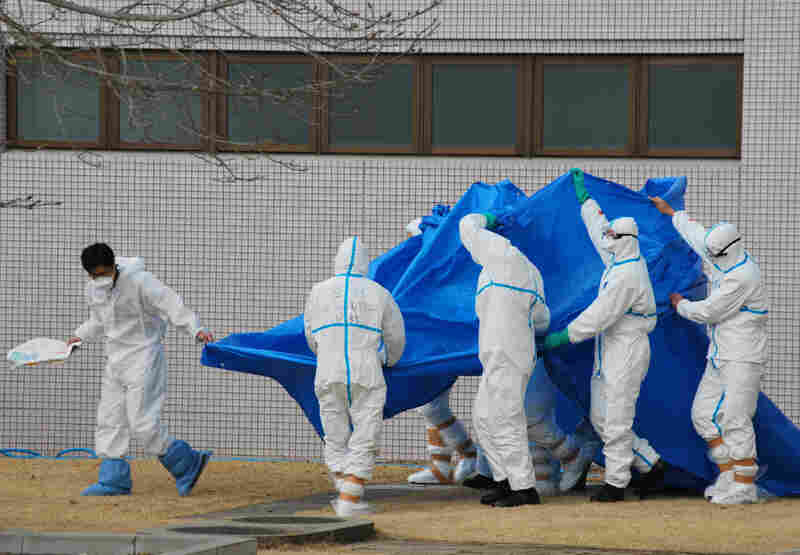 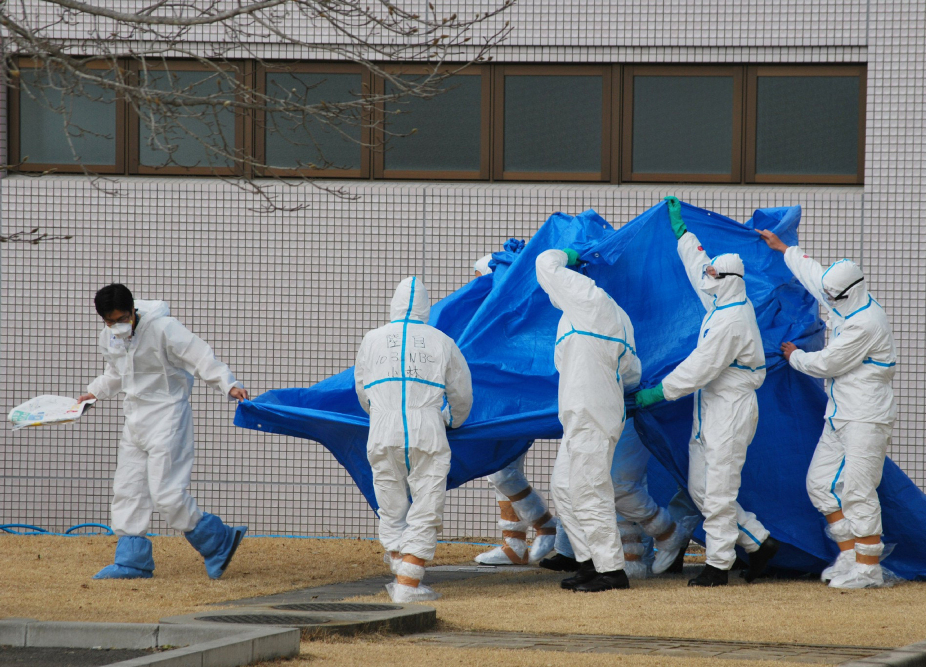 Japan Self-Defence Force officers in radiation protection suits hold a blue sheet over workers who were exposed this week to high levels of radiation at the Fukushima Dai-ichi plant.

Japan's government revealed a series of missteps by the operator of a radiation-leaking nuclear plant on Saturday, including sending workers in without protective footwear in its faltering efforts to control a monumental crisis. The U.S. Navy, meanwhile, rushed to deliver fresh water to replace corrosive saltwater now being used in a desperate bid to cool the plant's overheated reactors.

The Nuclear and Industrial Safety Agency, or NISA, said TEPCO was aware there was high radiation in the air at one of the plant's six units several days before the accident in which the workers were injured. And the two workers hurt were wearing boots that only came up to their ankles — hardly high enough to protect their legs, agency spokesman Hidehiko Nishiyama said.

In Japan, Life In Limbo

In Japan, Life In Limbo

"Regardless of whether there was an awareness of high radioactivity in the stagnant water, there were problems in the way work was conducted," Nishiyama said.

NISA warned TEPCO to improve and ensure workers' safety, and TEPCO has taken measures to that effect, Nishiyama said, without elaborating.

U.S. naval barges loaded with freshwater sped toward Japan's overheated nuclear plant on Saturday to help workers struggling to stem a worrying rise in radioactivity and remove dangerously contaminated water from the facility.

Workers at the stricken plant have been using seawater in a frantic bid to stabilize reactors overheating since a tsunami knocked out the complex's crucial cooling system March 11, but fears are mounting about the corrosive nature of the salt in the water.

TEPCO is now rushing to inject the reactors with freshwater instead to prevent pipes from clogging and to begin extracting the radioactive water, Nishiyama said Saturday. 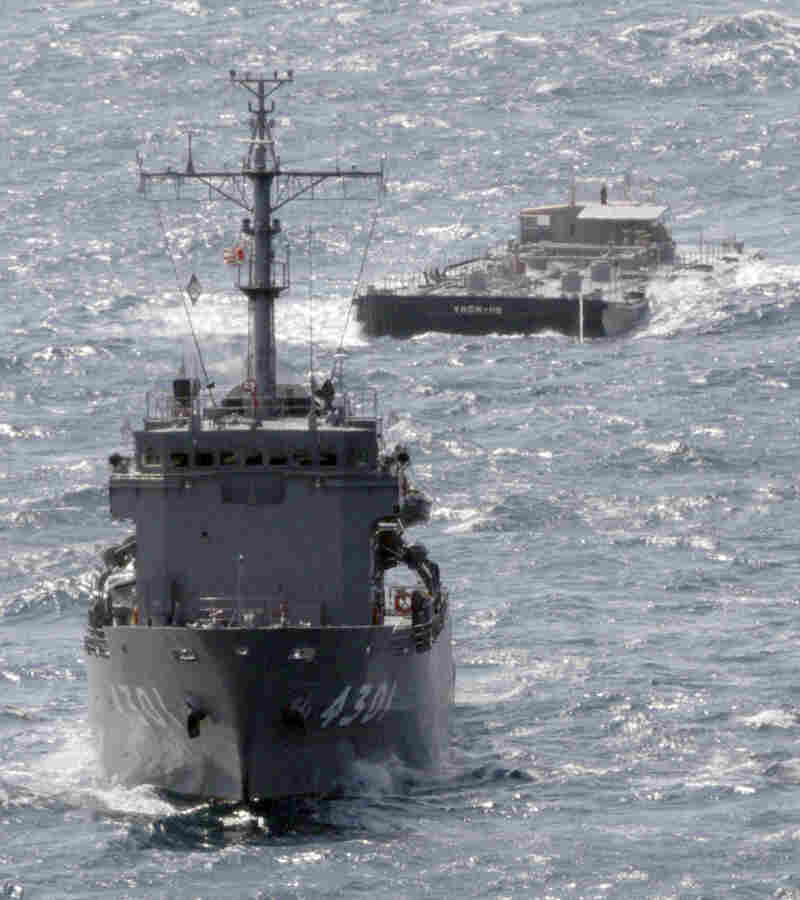 A U.S. Navy barge, back, is towed Saturday by a Japanese Maritime Self-Defense Force support ship off the coast of Japan. The barge is carrying 275,000 gallons of freshwater to support cooling efforts at the damaged Fukushima Dai-ichi nuclear power plant. Yasushi Kannno/AP hide caption 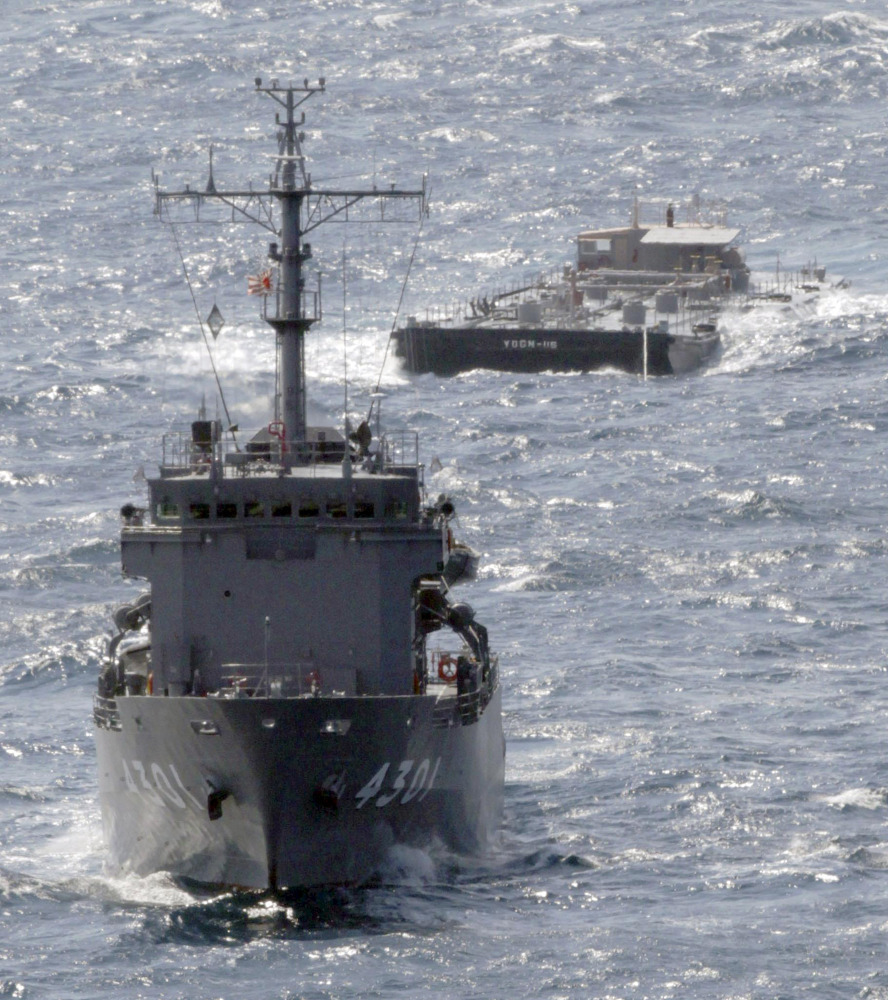 A U.S. Navy barge, back, is towed Saturday by a Japanese Maritime Self-Defense Force support ship off the coast of Japan. The barge is carrying 275,000 gallons of freshwater to support cooling efforts at the damaged Fukushima Dai-ichi nuclear power plant.

The situation at the stricken plant remains unpredictable, government spokesman Yukio Edano said, adding that it would be "a long time" until the crisis is over.

"We seem to be keeping the situation from turning worse," he said. "But we still cannot be optimistic."

The switch to freshwater was the latest tactic in efforts to gain control of the six-unit nuclear power plant located 140 miles northeast of Tokyo. Freshwater is now being used in place of sea water to cool the reactor pressure vessels at Units 1, 2 and 3, according to the International Atomic Energy Agency.

The switch was necessary because of concerns that salt and other contaminants in seawater were clogging pipes and coating the surface of reactor vessels and fuel rods, hampering the cooling process, NISA said.

Defense Minister Yoshimi Kitazawa said late Friday that the U.S. government had made "an extremely urgent" request to switch to freshwater. He said the U.S. military was sending water to nearby Onahama Bay and that water injections could begin early next week.

The U.S. Seventh Fleet confirmed that barges loaded with 500,000 gallons of freshwater supplies were dispatched to the Fukushima plant.

Radiation Detected In Water And Food

Radiation has been seeping from the plant since the magnitude 9.0 earthquake and ensuing tsunami on March 11, making its way into milk, seawater and 11 kinds of vegetables, including broccoli, cauliflower and turnips.

Just outside a reactor at the coastal nuclear plant, radioactivity in seawater tested some 1,250 times higher than normal, Nishiyama said. He said the area is not a source of seafood and the contamination posed no immediate threat to human health.

Tap water in several areas of Japan, including Tokyo, has shown higher-than-normal levels of radiation. In the capital, readings were 1.2 times higher than the government safety limit for infants, who are particularly vulnerable to radioactive iodine.

But levels have fallen steadily since peaking Wednesday, and Tokyo metropolitan officials said Saturday that tap water was now safe for babies to drink.

IAEA experts said the ocean will quickly dilute the worst contamination. Radioactive iodine breaks down within weeks but cesium could foul the marine environment for decades.

Nuclear safety officials suspect a breach in one or more of the plant's units, possibly a crack or hole in the stainless steel chamber around a reactor core containing fuel rods or the concrete wall surrounding a pool where spent fuel rods are stored.

Suspicions were aroused when the two workers suffered skin burns after unexpectedly encountering water that was 10,000 times more radioactive than levels normally found in the units, NISA said.

Such a breach could mean a much larger release of radioactive contaminants than had been thought. The most likely consequence would be contamination of the groundwater, experts said.

Radioactivity was on the rise in some units, Nishiyama said Saturday.

"It is crucial to figure out how to remove contaminated water while allowing work to continue," he said, acknowledging that the discovery would set back delicate efforts to get the plant's cooling system operating again.

Workers have begun pumping radioactive water from one of the units, Masateru Araki, a TEPCO spokesman, said Saturday.

Plant officials and government regulators say they don't know the source of the radioactive water. It could have come from a leaking reactor core, connecting pipes or a spent fuel pool. Or it may be the result of overfilling the pools with emergency cooling water.

But a breach in the chamber surrounding the reactor core seemed "more likely," Nishiyama said.

The nuclear crisis has compounded the challenges faced by a nation already overwhelmed by the disaster and devastation wrought by the tsunami.

Worries About Exposure To Weather, Radiation

Meanwhile, freezing rain and snow added to the miseries of people struggling to recover from the earthquake and tsunami. The weather has been especially hard on those who live near the stricken nuclear power plant in Fukushima prefecture. Thousands of residents have been asked to leave the area, in part to avoid exposure to radiation.

Japanese officials have been expanding the area of evacuation. "At the moment, we're talking about people who are roughly 12 to 18 miles from the plant," NPR's Jon Hamilton says. "One of the reasons they may not have done this before is that it is really difficult to find a place to put thousands of people. 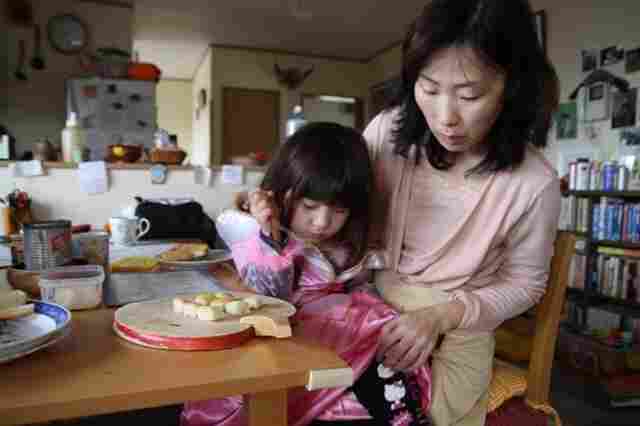 Junko Holland gets her daughter Sophie ready for school in the small town of Aizuwakamatsu. The family is trying to find some normalcy while living uncomfortably close to a quake-damaged nuclear plant. Doualy Xaykaothao for NPR hide caption 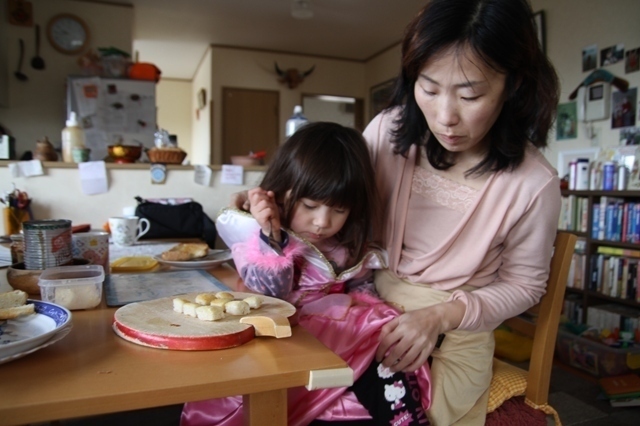 Junko Holland gets her daughter Sophie ready for school in the small town of Aizuwakamatsu. The family is trying to find some normalcy while living uncomfortably close to a quake-damaged nuclear plant.

"On the other hand, the living conditions in this area have gotten really tough," he adds. "There have been reports of people who have died from exposure [to the weather] and lack of facilities there."

Even those who live and work a good distance away from the plant are still concerned about radiation exposure. Stephen Holland runs a language school with his wife in the small town of Aizuwakamatsu and they have a 3-year-old daughter. They couple worry about what they'll do if the evacuation zone around the plant is expanded, Doualy Xaykaothao reports.

"If those instructions come through, then, so, everybody's going to be evacuating, and there will be just traffic jams everywhere. So the dilemma is do we stay or do we go," says Stephen Holland, who grew up in Britain and who has lived in Japan for 21 years.

His wife, Junko Holland, says she also doesn't want to leave her family, neighbors and community. "That's quite difficult. Right now, I don't feel like leaving here immediately because we are still 100 kilometers from [the nuclear plant], but if government says you have to leave, I think yeah, I'm going to decide to leave here."

U.S. Air Force personnel were delivering water to evacuees in northeast Japan. At Yokota Air Base, planes are arriving with emergency supplies, including 360 tons of bottled water, plus troops who will help build showers at some evacuation shelters. According to Capt. Kenneth Tarr, some shelters farther to the north are still without running water or electricity. 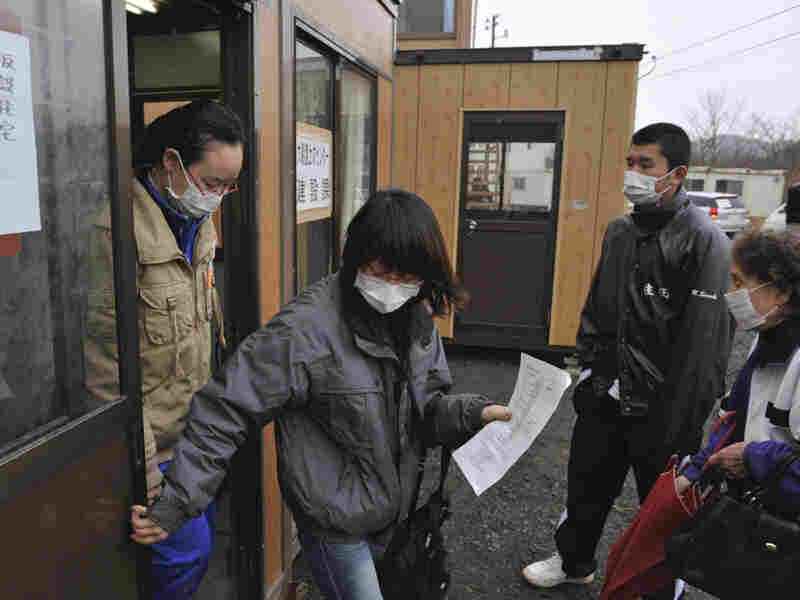 Evacuees who lost their homes in the March 11 earthquake and tsunami visit a makeshift city hall to apply for temporary housing in Rikuzentakata, Japan. Tetsu Joko/AP hide caption 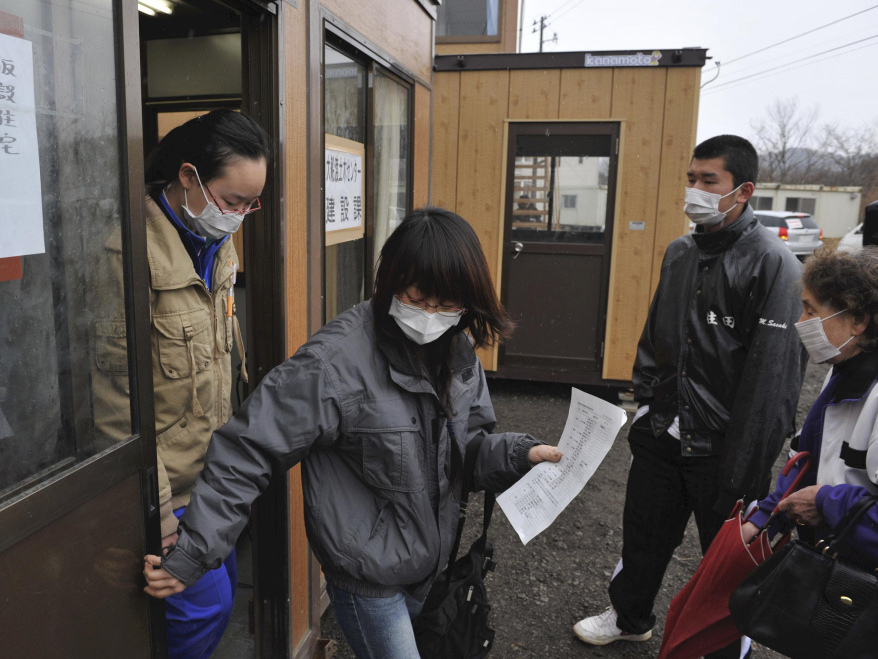 Evacuees who lost their homes in the March 11 earthquake and tsunami visit a makeshift city hall to apply for temporary housing in Rikuzentakata, Japan.

Japanese soldiers and U.S. Marines were clearing away debris so they could keep searching for bodies and bury the dead. The official death toll was 10,151 Saturday, with more than 17,000 listed as missing, police said. Those lists may overlap, but the final death toll was expected to surpass 18,000.

Hundreds of thousands whose homes were destroyed still have no power, no hot meals and, in many cases, have not showered in two weeks.

Life was also tough in the ghost towns inside a larger voluntary evacuation zone, with most residents choosing to flee and wary truckers refusing to deliver goods.

In Minamisoma, a city of 71,000 about 20 miles north of the nuclear plant, all but one or two shops shut their doors because of a lack of goods and customers, said city official Sadayasu Abe.

"Commercial trucks are simply not coming to the city at all due to radiation fears," he said Saturday.

Military troops and some private companies took up the task of delivering rice, instant noodles, bottled water and canned foods to eight central spots in the city, Abe said.

He said the city was urging the 10,000 or so still holding out to leave since the situation at the plant remains precarious.

"Life is very difficult here," he told The Associated Press by telephone. "We have electricity, gas and running water, but no food."

NPR's Jon Hamilton and Doualy Xaykaothao contributed to this report, which contains material from The Associated Press.