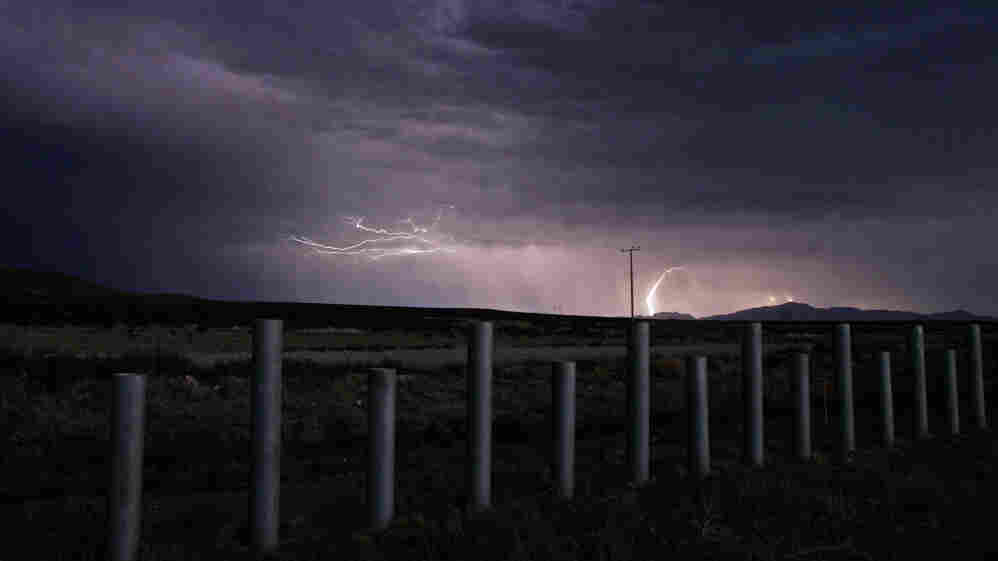 The U.S.-Mexico border is marked with steel vehicle barriers near Columbus, N.M. The quiet border town was rocked recently when its mayor, police chief, a city councilman and others were arrested on gun smuggling charges. Chip Somodevilla/Getty Images hide caption 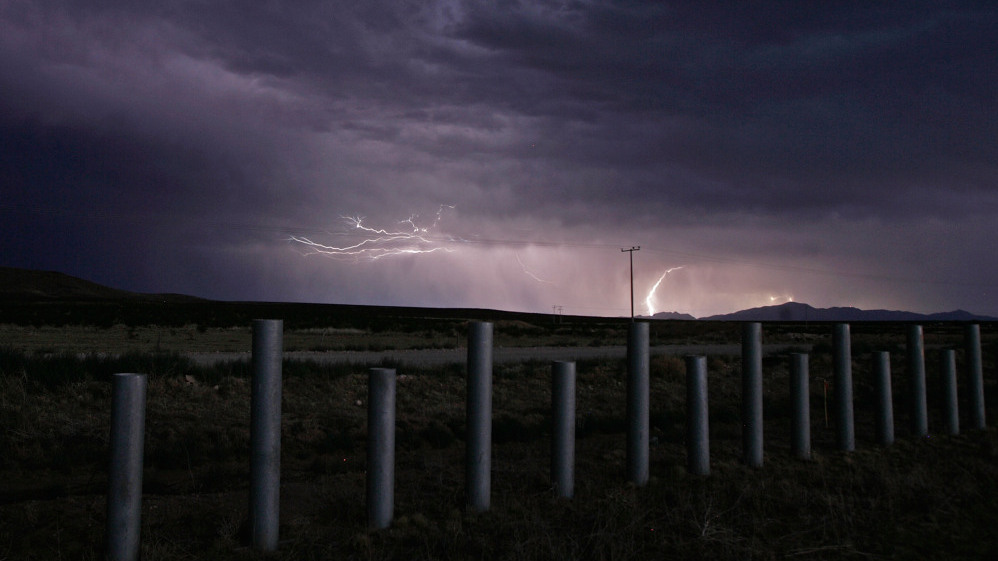 The U.S.-Mexico border is marked with steel vehicle barriers near Columbus, N.M. The quiet border town was rocked recently when its mayor, police chief, a city councilman and others were arrested on gun smuggling charges.

Earlier this month, federal agents busted a suspected gunrunning ring that allegedly includes the mayor, police chief and a city councilman of Columbus, N.M. The government alleges the officials used the power and privileges of office to buy weapons destined for a Mexican drug cartel.

Up until now, the most notorious crime in the history of Columbus was the infamous raid by Pancho Villa on the U.S. garrison here in 1916. That was before March 10 of this year. 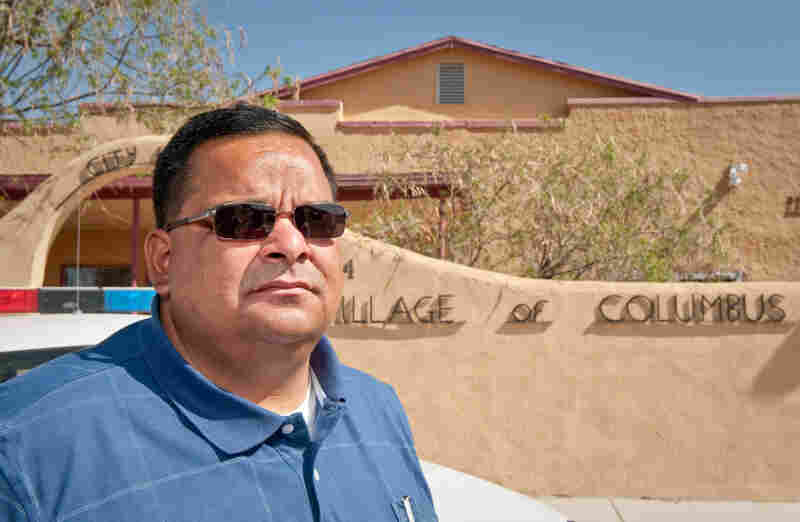 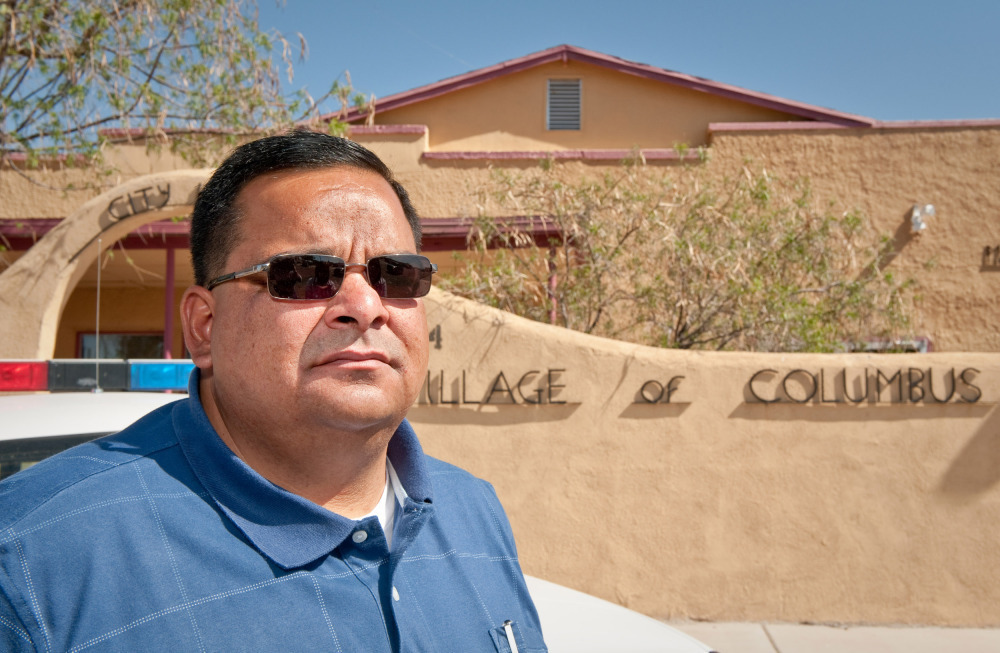 Columbus Police Chief Angelo Vega is among the officials arrested by federal agents on charges of gun trafficking.

"If you read the indictment, there's damning evidence there," Lt. Robert Odom of the Luna County Sheriff's Department says. "It would point to the fact that our village was being run by a criminal cartel."

Odom is a reserve deputy who lives and patrols in Columbus.

"I don't think we expected that, because we know — we've seen — people killed in Palomas just right over there. And heads on the plaza cut off, and the mayor of Palomas murdered and his body burned up," Odom says.

Palomas has been stricken by drug violence in recent years. It's caught in the same bloody turf battle between the Juarez and Sinaloa cartels that afflicts Ciudad Juarez. Palomas Mayor Estanislao Garcia was abducted and killed in October 2009. In August of last year, three severed heads were left in the town's main plaza.

"To think that our elected officials were cooperating with that — I think it was more than we can still comprehend."

According to the indictment, over a 14-month period, the city officials used an unmarked police vehicle and the authority of their offices to buy more than 200 semi-automatic weapons such as AK-47 pistols, the chopped-down version of the assault rifle popular with cartel assassins.

The firearms dealer in Chaparral, N.M., who allegedly sold them the weapons, has also been arrested. The indictment says the ringleaders got acquaintances to serve as straw purchasers for the guns.

"Usually what they do is they'll get a U.S. citizen — they'll have somebody who doesn't have a criminal record, of course — and they'll buy one gun, then later, two, and then they get more people doing that. And it just keeps multiplying," he says.

Mexican Anger At The U.S.

News of the alleged Columbus gunrunners raced through Mexico, where people are already angry that most of the murder weapons used in their mafia wars come from the U.S.

A laborer hanging out in a public park three blocks south of the U.S. border fence won't give his name, but he will give his opinion.

"The gringos always blame Mexicans, that we're the corrupt ones," he says. "But this deal with the guns in your country, now we see that there's corruption in the United States, too."

In a small shopping center in Palomas that caters to American tourists — the few who still venture across the border — a woman who gives her name as Irma stands in front of the eyeglasses shop where she works. She says she was born in Colorado and lives with her Mexican husband in Palomas.

"I was so embarrassed when I heard that, because everybody here in Mexico looks at me: 'You're a United States citizen. Did you hear what your people did?'" Her answer, she says, is "Oh my god, I'm so sorry.' Because a weapon is more dangerous than a drug."

The Mexican government has loudly criticized the United States for not doing more to curb weapons smuggled into Mexico to arm cartel gangsters. In response, U.S. federal agents have increased their enforcement of gun laws along the border.

The arrests in Columbus are part of that push. Eleven defendants have been indicted and one is still a fugitive.

Life In The Still-Wild West

On a recent afternoon, a great sandstorm blows in from the west, enveloping the weather-beaten buildings of Columbus in brown grit and adding to the town's Wild West demeanor.

Do accusations that the city leadership is a cabal of gun traffickers worry longtime resident July McClure?

"In spite of everything that goes on here, I don't lock my door," she says. "I leave things in the yard and am gone for several days and nothing's ever disturbed. It's still a very safe place to be."

McClure is a volunteer firefighter and co-owner of the Tumbleweed Theater. She played an alien in the last production. She seems to take the federal gun bust in stride, indeed, with a twinkle in her eye.

"Sometimes I think the Pancho Villa energy is still alive, and it creeps into our society living right here on the border," she says.

In 1916, Gen. John J. Pershing led a punitive expedition deep into Mexico in the fruitless pursuit of Pancho Villa in retribution for the Columbus raid. In 2011, prosecutors will try the Columbus 11 in the federal courthouse in Las Cruces.