Accessibility links
Bomb Explodes At Jerusalem Bus Stop One person was killed and at least 25 people were wounded in the blast at a crowded bus stop in central Jerusalem. The armed wing of the Palestinian militant group Islamic Jihad praised the attack, which killed one person, but no group directly claimed responsibility. 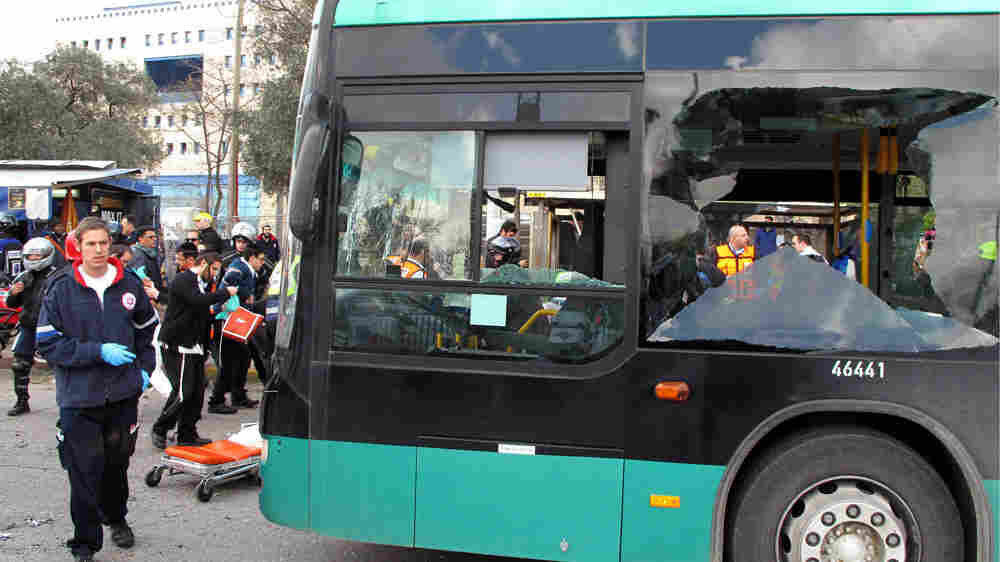 A bomb exploded at a crowded bus stop in central Jerusalem Wednesday, killing one person and wounding more than 25 others.

The armed wing of the Palestinian militant group Islamic Jihad praised the attack, but no group came forward and directly claimed responsibility. Police spokesman Micky Rosenfeld said that police had been on a heightened state of alert but did not have specific intelligence about the attack.

"We know that the explosion is a terrorist attack; we have confirmed that," he said.

Rosenfeld said all the people who were injured in the blast were standing between the bus stop and the No. 74 bus.

The leaders of the Western-backed Palestinian government in the West Bank condemned the bombing. Prime Minister Salam Fayyad denounced it in "the strongest terms," while President Mahmoud Abbas, traveling in Russia, issued a similar statement.

Israeli Prime Minister Benjamin Netanyahu immediately postponed a planned visit to Russia. He said the Israel Defense Forces will not stand by and allow its citizens to be killed. He suggested that the IDF could launch a large-scale attack in Gaza if the violence persists.

Tensions have been rising in the region as the Israeli-Palestinian peace process remains at a standstill. Jerusalem suffered dozens of suicide bombings that targeted buses and restaurants during the second Palestinian uprising last decade, but the attacks had halted in recent years. Jerusalem last experienced a suicide bombing in 2004.

Over the past several weeks, Israelis and Palestinians have engaged in tit-for-tat violence that has left civilians dead on both sides in the West Bank and the Gaza Strip.

In the U.S., President Obama expressed condolences for the victims of the bombing and for the Palestinian family killed by the errant missile strike.

"There is never any possible justification for terrorism," Obama said in a statement. "The United States calls on the groups responsible to end these attacks at once and we underscore that Israel, like all nations, has a right to self-defense. We also express our deepest condolences for the deaths of Palestinian civilians in Gaza yesterday."

NPR's Lourdes Garcia-Navarro reported that the blast echoed through Jerusalem. Ambulances rushed to the scene and emergency workers carried away the wounded — many of them bloody and unconscious — on stretchers.

The blast ripped through several crowded buses at the entrance to the city. The explosion hit at the beginning of rush hour, and the area was crowded with commuters.

Fifty-eight-year-old Tzarfat Avivya said she was approaching the bus when the bomb exploded.

Showing scrapes on her hands from where she dived for cover, Avivya said she takes the 74 bus every day. She said she feels lucky, but that it feels reminiscent of the bus bombings that regularly plagued the city during the Palestinian uprising.

Meir Hagid, one of the bus drivers, told The Associated Press that he heard a loud explosion as he drove by the site, located near the main entrance to Jerusalem and its central bus station.

"I heard the explosion in the bus stop," Hagid said, adding that he stopped his vehicle and people got off. He said nobody on his bus was hurt.

Jerusalem's police chief, Aharon Franco, said there were no firm leads but authorities were investigating a possible link to a small bombing earlier this month that wounded a garbage collector as he removed the device from a trash can.

Sheera Frenkel and NPR's Lourdes Garcia-Navarro reported from Jerusalem for this story, which contains material from The Associated Press