Accessibility links
Obama Seeks To Define Libya Mission In Speech The president has been criticized by Republicans and some Democrats who say he should have stated his goals for airstrikes from the start. Monday's speech will be Obama's first major attempt to address the complaints since the military operation started nine days ago. 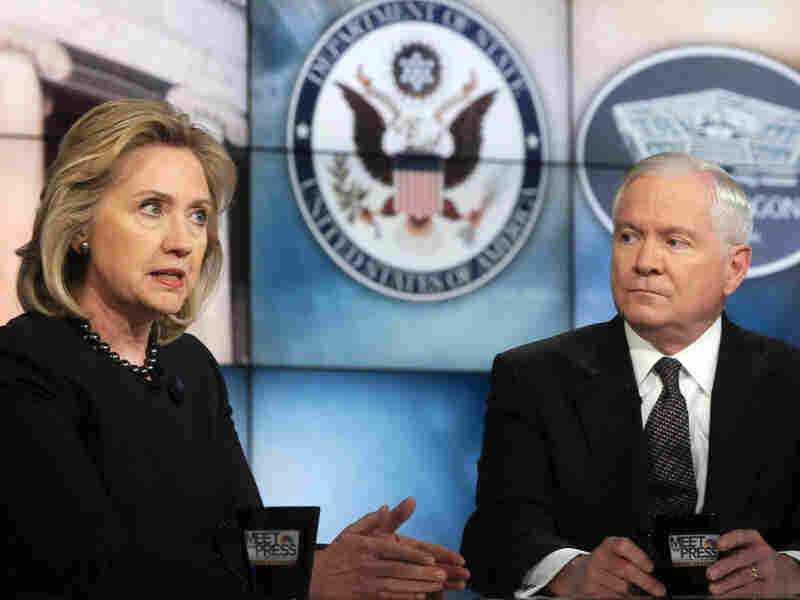 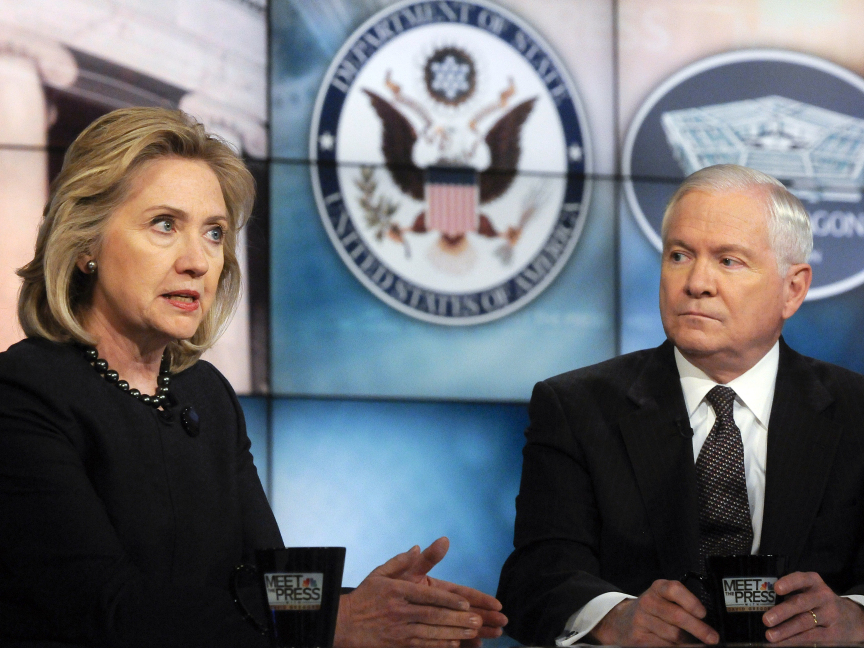 In a photo released by NBC News, Secretary of State Hillary Clinton and Secretary of Defense Robert Gates discuss Middle East policy on Meet the Press.

President Obama addresses the nation about U.S. military operations in Libya on Monday night. The operation started nine days ago. Since then, Obama has faced criticism from Republicans — and some Democrats — for not having stated firm goals, and for not getting congressional approval first.

The speech from the National Defense University in Washington, D.C., will be his first major attempt to explain his thinking.

He offered a preview in his weekly address on Saturday, saying that the U.S. should not and cannot intervene every time there is a crisis somewhere in the world.

But, Obama said, "When someone like Gadhafi threatens a bloodbath that could destabilize an entire region, and when the international community is prepared to come together to save many thousands of lives — then it's in our national interest to act."

On NBC's Meet the Press, Gates was asked if Libya fits the definition of a vital U.S. interest. He said no, but the country "clearly [has] interests there, and it's a part of the region which is a vital interest for the United States."

Clinton said the U.S. is acting as a member of NATO, pointing out that when the U.S. asked for NATO allies to join the war in Afghanistan after the Sept. 11, 2001, terrorist attacks, they responded.

"When it comes to Libya," she said, "we started hearing from the U.K., France, Italy, other of our NATO allies. This was in their vital national interests."

Sen. Richard Lugar is the ranking Republican on the Senate Foreign Relations Committee, which will hold a hearing on Libya later this week. On Meet the Press, he said the president should have sought congressional approval.

There must be objectives ... what we want to achieve. And then, at least, some means as to how that's going to occur. That has not happened as yet.

Lugar added that "there must be objectives ... what we want to achieve. And then, at least, some means as to how that's going to occur. That has not happened as yet."

The chairman of the Senate Armed Services committee, Democrat Carl Levin, was on CNN. He backed up the White House on Libya, adding that the no-fly zone is working.

"It has set Gadhafi back," Levin said. "He's on his heels now, moving his troops towards his capital, where he is strong. But it has prevented the slaughter of Libyan people, and that is what the trigger was for the president."

On Sunday, NATO announced that it is taking over command of the operation. That's something the president will be emphasizing in his speech.

But Gates, while stressing that U.S. ground forces will not be deployed to Libya, also said Sunday it's impossible to say if the U.S. military will still be part of the Libya operation at year's end.

The ongoing unrest in the wider region presents more unknowns. That's something Republican Sen. John McCain cautioned about on Fox News Sunday. He cites Yemen as one example.

"Yemen is entirely different," he said. "This is going to be a huge problem, because it is basically a tribal society, as you know, cobbled together, the country, by the British. And so it's going to be very difficult in some of these countries."

But McCain said he feels good about the chances for democracy to take hold in Tunisia and Egypt.