Accessibility links
Libyan Rebels Close In On Key Gadhafi Stronghold Libya's rebel forces edged closer to Moammar Gadhafi's hometown of Sirte, the gateway to the western half of the country. Backed by U.N.-approved international airstrikes, the rebels have regained nearly all the territory they lost in the past week. 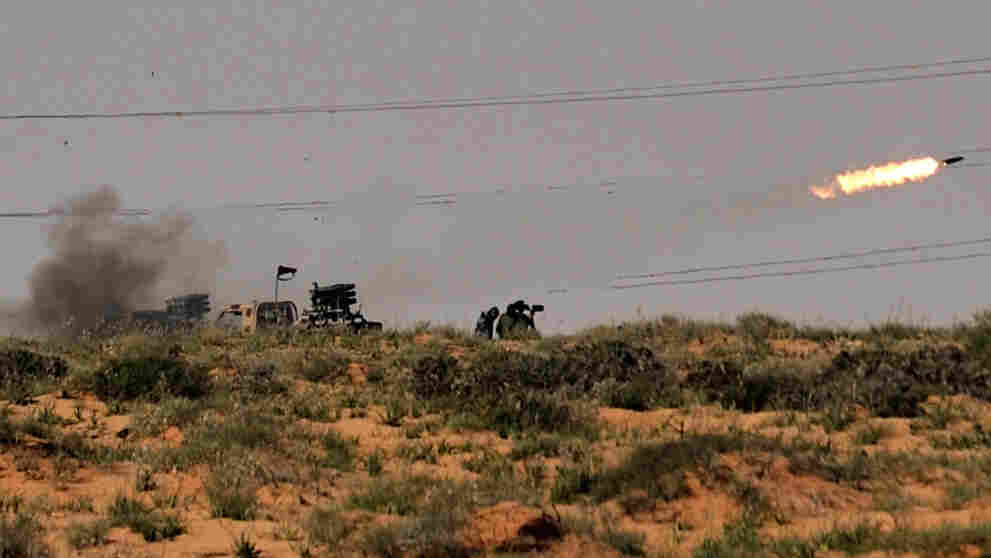 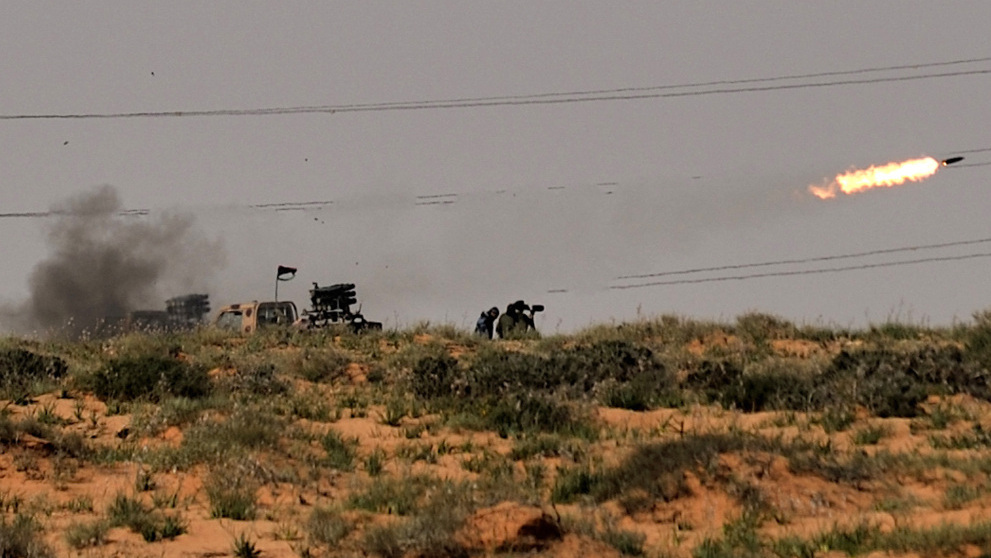 Libya's resurgent rebels swept westward to the doorstep of Moammar Gadhafi's hometown, as NATO warplanes littered a main road along the Mediterranean with the burned-out hulks of government tanks.

The opposition force appeared to be closing in on the city of Sirte, although rumors that the city had already fallen triggered celebratory gunfire in the de facto rebel capital of Benghazi. Fighting raged about halfway between Sirte and Bin Jawad, a town about 100 miles to the east.

The rebels' lightning advance of the past few days, backed by U.N.-approved international airstrikes, has regained nearly all the territory lost by the opposition over the past week. Sirte lies 250 miles east of the capital, Tripoli. 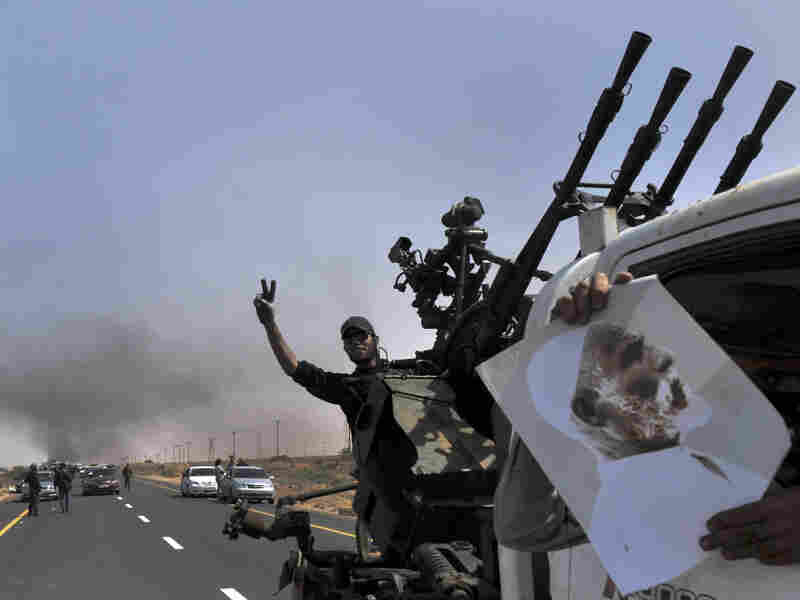 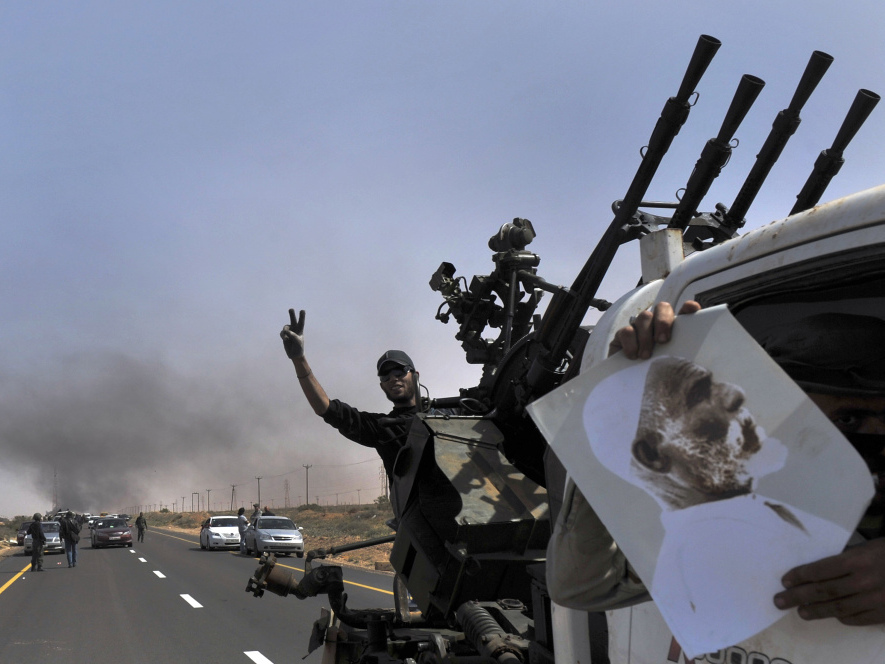 Libyan rebels pushed westward from the town of Bin Jawad toward Moammar Gadhafi's hometown of Sirte on Monday.

Asked where the alliance drew the line between shielding civilians and aiding rebels, Lt. Gen. Charles Bouchard of Canada said his mission was clear: "Our goal is to protect and help the civilians and population centers under the threat of attack."

President Obama, who was expected to try to delineate American objectives for military involvement in Libya during a prime-time address Monday night, has said Washington has a moral duty to intervene.

But coalition strikes directed against Sirte — where much of the population is believed to support Gadhafi — would seem to expand an international mission whose stated goal is to protect civilians, not bring about regime change.

Libya's deputy foreign minister, Khaled Kaim, said Monday in Tripoli that "the objective of the coalition now, it is not to protect civilians because now they are directly fighting against the armed forces."

The U.S. and other coalition nations also have discussed options for arming rebel fighters, a senior military official told NPR on Friday. The rebels have requested rocket-propelled grenades, which the official said could be used to counter Libyan armor.

Along the road that ties the string of cities along the country's Mediterranean coast, NPR's Eric Westervelt saw little but burned-out cars, tanks and vehicles — all destroyed by airstrikes from coalition and NATO warplanes enforcing the U.N.-approved no-fly zone. Allied warplanes have pounded Libya since March 19.

The remnants of a hasty retreat by Gadhafi's forces were clearly visible Monday, said Westervelt, who was reporting near the city of Brega, about 190 miles east of Sirte.

"I've seen green uniforms strewn around the ground, green crates, ammunition. It appears they left in an absolute hurry," he said. "Some of these towns are virtually abandoned, deserted. The shops are closed, there are very few people on the street. There are obvious signs of fighting, destruction along the main roads. Bullet holes everywhere."

In Sirte, witnesses told The Associated Press that some residents were fleeing as soldiers from a brigade commanded by Gadhafi's son al-Saadi and allied militiamen streamed to positions on the city's outskirts. They also said the city — which is home to a significant air and military base — was hit by airstrikes Sunday night and Monday morning but did not know what was targeted.

During his more than four decades in power, Gadhafi lavished money on Sirte and reinforced it with elite troops. The city was once viewed as impregnable.

"Sirte will not be easy to take," said Gen. Hamdi Hassi, a rebel commander in Bin Jawad. "Now because of NATO strikes on [the government's] heavy weapons, we're almost fighting with the same weapons."

Hassi said there was fighting just outside the hamlet of Nawfaliyah, 60 miles eats of Sirte, and that scouting parties had found the road ahead to be heavily mined.

NATO-led coalition airstrikes targeted the besieged city of Misurata and the town of Sebha, 400 miles south of the capital.

NPR's Lourdes Garcia-Navarro said government troops appeared to be in control of part of Misurata, one of the few cities in the west once held by the rebels.

She reached the city Monday and was taken by government minders to a spot about a mile from the center of town where Gadhafi supporters had gathered in a show of loyalty. The government, she said, "clearly wanted to present evidence that pro-Gadhafi forces control part of the city."

Around the city, there was unmistakable evidence "of the fierce clashes that have taken place in this besieged city for many, many weeks now," Garcia-Navarro said.

"The loyalists of Gadhafi ... tell us that they have actually been targeted by NATO-led airstrikes over the past few days and evidence of that is everywhere," she said, citing burned-out buses, mangled trucks and other evidence of fierce fighting and bombardment.

Journalists had been unable to reach Misurata for weeks as rebels holed up inside were surrounded by regime forces. There had been reports of shelling and sniper fire on civilians by Gadhafi's forces, but Garcia-Navarro said it was not possible to verify those accounts.

In the capital, there was a growing sense of unease Monday as NATO attacks resumed overnight after several days of relative calm.

At least nine blasts rumbled through the city of 2 million, followed by barrages of ineffectual anti-aircraft gunfire, Garcia-Navarro reported. Civilians, many with bundles of their belongings strapped to their cars, joined some of Gadhafi's troops fleeing Tripoli to the relative safety of areas farther west.

At a news conference late Sunday night in Tripoli, a government spokesman was at a loss to explain the exodus.

"The air bombardment is not justified. It is attacking our stationary armies," Moussa Ibrahim said. "Some of them were attacked as they were withdrawing; they were moving clearly westbound and they were attacked."

At the same time, he insisted that Gadhafi's troops were "still strong on the ground."

On the streets of Tripoli, Garcia-Navarro said tensions were high. Many gas stations were closed, and others endured long lines. Shops were shuttered and people were desperately stocking up on bread and other basic staples, she said.

Some people faulted NATO for the deteriorating situation, while others leveled blame at Libya's government.

"The coalition bombing us is the ones who are shutting off the gas," one man said at a gas station. "I'm worried that one day water won't even arrive."

"I think the revolutionaries have legitimate demands," another man told NPR, adding that Gadhafi's underlings were just as responsible for the bloodshed that has followed the Feb. 15 uprising.

"When blood is spilt, it becomes a very difficult problem to solve," the man said.

After a lengthy and sometimes bitter debate over NATO's exact role in the international military operation, the 28-member alliance agreed Sunday to take over command and control from the U.S.-led coalition.

Bouchard, the Canadian commander, said NATO had already assumed responsibility for enforcing the no-fly zone and would soon take over the thornier task of selected strikes against pro-Gadhafi ground forces. He spoke at a news conference Monday in Naples, Italy, where military operations are headquartered.

NATO spokeswoman Oana Lungescu said the transfer of control from the U.S. to the alliance was under way and that she expected it to be completed in the next few days.

Defense Secretary Robert Gates said Monday in Washington that he could not offer a timetable for how long the Libya operation would last, but Obama said U.S. involvement in Libya would be "limited, both in time and scope."

Deputy National Security Adviser Denis McDonough sidestepped questions about whether Obama's address Monday night would lay out an exit strategy for U.S. actions in Libya. He said Secretary of State Hillary Clinton would discuss those details Tuesday during a key international meeting on Libya in London.

On Monday, the tiny Persian Gulf state of Qatar — one of only two Arab nations to join the military operation against Gadhafi — formally recognized the rebels as the legitimate representatives of Libya and promised to help them sell their crude oil on the international market.

Turkey, meanwhile, has confirmed that even as rebel forces advance on Sirte it has been working with representatives from the Libyan regime and the opposition to establish a cease-fire.

"We are one of the very few countries that are speaking to both sides," Foreign Ministry Spokesman Selcuk Unal said, without confirming whether Turkey had offered to act as mediator.

Turkish Prime Minister Recep Tayyip Erdogan told reporters that his country will take over operations at the airport in Benghazi to facilitate the transport of humanitarian aid to Libya, but he did not say when.

With reporting from NPR's Eric Westervelt near Brega, Lourdes Garcia-Navarro in Tripoli and Don Gonyea in Washington, D.C. Material from The Associated Press was used in this story.