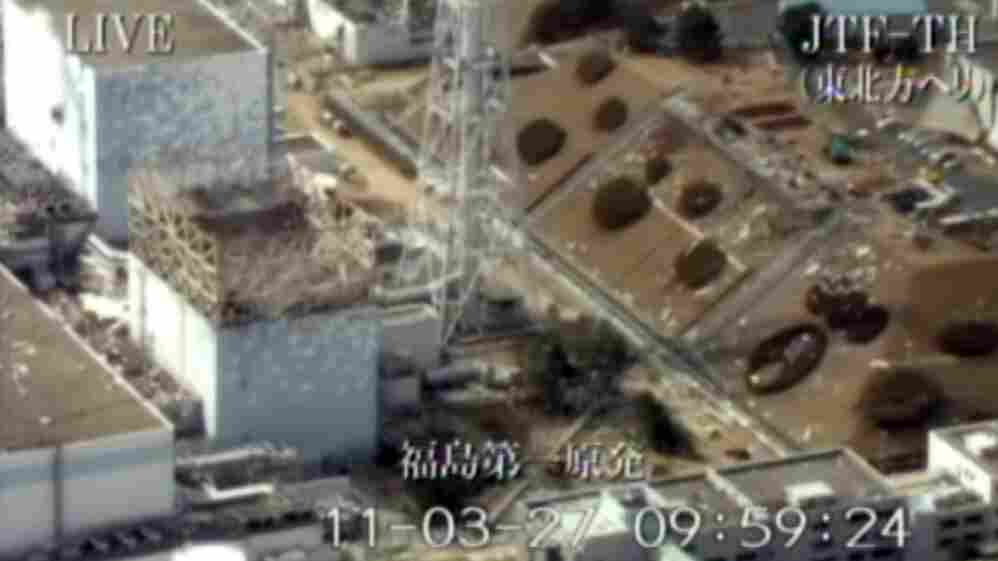 Reactor buildings No. 1 and 2 (left) of the Tokyo Electric Power Co. Fukushima No. 1 (Dai-ichi) nuclear power plant. Dangerous levels of radiation were detected in water thought to be leaking from the stricken Japanese reactor No. 2 have dealt a new setback to efforts to avert a nuclear disaster. Japanese Self-Defense Force/AFP/Getty Images hide caption

Highly radioactive water has nearly filled a series of underground tunnels at Japan's damaged Fukushima Dai-ichi nuclear power plant, Japanese officials say. That's raised concerns that the contaminated water may have started spilling into the sea, only a couple of hundred feet away.

The water was found in underground tunnels and trenches that run outside of the nuclear reactors, near three buildings that house massive steam turbines at the coastal nuclear complex. The discovery comes several days after water with similar levels of radioactivity began flooding the basements of the turbine buildings. It's not clear whether that water came from the tunnels.

Experts say that the latest developments at the plant are a product of the frantic efforts to cool the overheated reactors in the two weeks since the earthquake.

"They've just been adding more and more water. That water had to go somewhere — it's flooding all kinds of places where it shouldn't be," said David Lochbaum, director of the nuclear safety project for the Union of Concerned Scientists, in a press conference Monday. "It carries radioactivity with it...and there is evaporation of water containing radioactive material."

Meanwhile, new readings show that ocean contamination has spread about a mile farther north of the coastal nuclear complex than before. Radioactive iodine-131 was discovered just offshore from the Unit 5 and Unit 6 reactors at a level 1,150 times higher than normal, Hidehiko Nishiyama, a spokesman for the Nuclear and Industrial Safety Agency, a government group that monitors worker safety, told reporters.

Arnie Gundersen, a consultant at Fairewinds Associates who has worked on nuclear reactors similar to the Dai-ichi plant, says the presence of such high levels of radiation in the ocean suggests that water leaking from the reactors is running off into the ocean.

"The contamination we're seeing in the ocean is so significant it couldn't have come from an airborne release – it had to be liquid," said Gundersen.

Closer to the plant, radioactivity in seawater tested about 1,250 times higher than normal last week and climbed to 1,850 times normal over the weekend. Nishiyama said the increase was a concern but the area was not a source of seafood.

With the leak, in the short term all they can do is pour water into the reactors and collect what comes out. But the storage of the [water] is going to be an intermediate term problem: They're going to have to find a place to store it and keep it out of the ocean.

Arnie Gundersen, a consultant who has worked on nuclear reactors similar to the Dai-ichi plant

The contaminated water flooding the tunnels and turbine buildings represents the latest in a string of setbacks — including fires, explosions and mechanical failures — that have hampered efforts to get the situation under control at the nuclear facility, located 140 miles northeast of Tokyo. Authorities in Japan say those efforts will take months.

Workers on Monday resumed efforts to pump out hundreds of tons of water from the turbine buildings. But high levels of radioactivity in the water limit how long workers can tackle the task.

On Sunday, the Tokyo Electric Power Co., which operates the facility, said that the water inside the turbine building for Unit 2 tested at radiation levels some 100,000 times normal amounts. Those levels make it unsafe for workers to stay for more than 15 minutes or so. (Earlier, TEPCO had erroneously said that radiation levels in the water in Unit 2 were 10 million times above normal — news that sent employees fleeing the unit. The company later apologized for the error.)

The contaminated water must be removed and safely stored before workers can continue to repower cooling systems critical to keeping nuclear rods from dangerously overheating. The facility's systems were knocked out by the magnitude 9.0-quake and massive tsunami that struck Japan on March 11.

Workers are making progress in removing water from Unit 1's turbine building to its main condenser, according to the International Atomic Energy Agency. IAEA officials say this process should reduce the radiation levels in the turbine building and reduce the contamination risk faced by workers who are in that building restoring equipment.

TEPCO officials also intend to pump water from the turbine buildings to the main condensers at Units 2 and 3, but are still deciding how to do it, the IAEA said. TEPCO says it will then focus on the water in the tunnels.

But the condenser building is only a temporary fix to the toxic water problem.

"With the leak, in the short term all they can do is pour water into the reactors and collect what comes out," said Gundersen. "But the storage of the [water] is going to be an intermediate term problem: They're going to have to find a place to store it and keep it out of the ocean."

Many other questions remain about what is going on inside the plant and how TEPCO officials plan to move forward.

"We're sure there is a disaster, but we're not sure how it is all happening," said Lochbaum of UCS. "A lot needs to be done to regain control over that material and limit how much of it gets out from the site."

Last week, three workers were exposed to elevated levels of radiation after they stepped in radioactive water inside a turbine building without protective footwear. Medical examinations carried out at the National Institute of Radiological Sciences revealed that the workers' legs were exposed to approximately 2 and 6 sieverts of radiation, which resulted in minor burns, authorities said. The injured workers were released from the hospital Monday.

Experts are still debating the exact source of the highly radioactive water pooling in the turbine buildings and the tunnels.

Japan's nuclear watchdog, the Nuclear Safety Commission, said Monday that its members — government-appointed experts who monitor the atomic industry — believe that the water came from the containment vessel for the Unit 2 reactor. It did not clearly state that the primary containment vessel, which protects the core, had been breached.

The IAEA, however, said Sunday that readings from all three reactor pressure vessels show that pressure inside is stable or increasing slightly, which would not be the case if there were a large crack or hole in the containment vessel. The IAEA's statement also said radiation has been decreasing outside the reactor cores — another indication that the cores themselves remain intact.

The IAEA's Denis Flory noted Monday that pipes could be carrying the radioactive water or steam from the damaged reactors into the turbine buildings.

Keeping People Of Out Of Evacuation Zone

Meanwhile, Chief Cabinet Secretary Yukio Edano is imploring residents to stay out of the mandatory 12-mile evacuation zone around the plant, saying radioactive isotopes posed a "big" health risk. His plea came in response to reports that people had been sneaking back in without government approval.

The government is also calling on people who live within 12 to 18 miles of the leaking reactor to leave voluntarily, NPR's Jason Beaubien reports.

"Originally, residents in the 12-to-18-mile buffer zone had been told to stay indoors," Beaubien says. "The government now says people should voluntarily evacuate because of a lack of supplies and public services in the area."

Scores of strong earthquakes have rattled Japan over the past two weeks, adding to the sense of unease across Japan, where the final death toll from the March 11 disasters is expected to top 18,000.

NPR's Richard Harris, Jon Hamilton and Jason Beaubien contributed to this report, which contains material from The Associated Press.