Accessibility links
How Abuse By Priests Can Go Undetected In Philadelphia, 21 Catholic priests accused of sexual abuse of minors slipped through the cracks. But with all the safeguards the Roman Catholic Church put into place after the sex abuse scandal in 2002, how could this happen? It turns out that there's a lot of play in those rules. 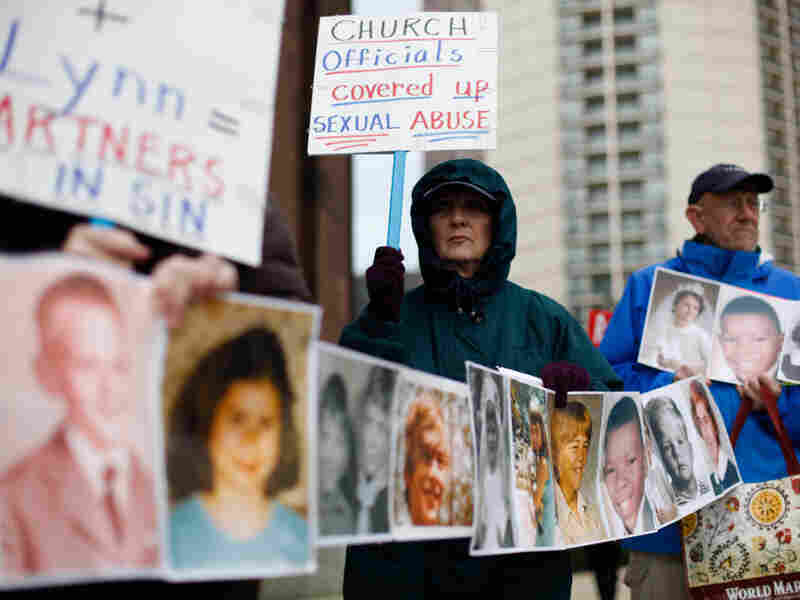 Catherine Coleman Murphy, of Lansdale, Pa., and Jack Wintermyer, of Silver Spring, Md., protest outside Cathedral Basilica of Saints Peter and Paul in Philadelphia the day after the Philadelphia archdiocese suspended 21 priests who were named by a grand jury as child molestation suspects. Matt Rourke/AP hide caption 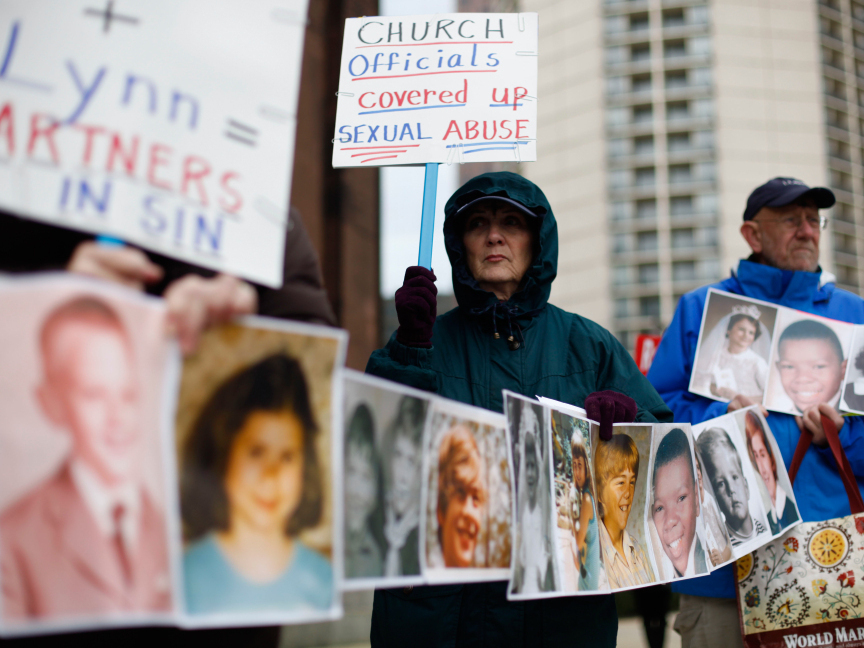 Catherine Coleman Murphy, of Lansdale, Pa., and Jack Wintermyer, of Silver Spring, Md., protest outside Cathedral Basilica of Saints Peter and Paul in Philadelphia the day after the Philadelphia archdiocese suspended 21 priests who were named by a grand jury as child molestation suspects.

A couple of years ago, the Philadelphia archdiocese heard about three priests who had allegedly raped two boys. It gave the priests' files to law enforcement, and a grand jury began to investigate. Then, the grand jury stumbled on a bombshell. A church employee testified that there were many other priests the panel should know about.

"The grand jury found that a policy of zero tolerance was not actually in effect," says District Attorney Seth Williams, "and that there were many priests that had allegations made against them that were still in active ministry."

There were 37 priests, according to a scathing report by the grand jury, which was released last month. Shaken by accusations that it was trying to keep abusers in ministry without telling parishes, the archdiocese moved quickly: It hired Gina Maisto Smith, a former prosecutor with a specialty in child sex abuse cases, to investigate further. The church soon put 21 clergy on administrative leave.

Smith is unable to speak to the specific cases, but she says she has seen no evidence that church officials intentionally protected sexual predators.

"I can say with clarity that I saw the archdiocese doing what it could do within the systems that it had and making the best decisions they could under the circumstances," she says.

This raises the question: With all the safeguards the Roman Catholic Church put into place after the sex abuse scandal in 2002, how could this happen? If the archdiocese was following all the right procedures, how did these priests fall through the cracks?

It turns out that there's a lot of play in the rules, says Terry McKiernan, president of Bishop Accountability.org, a watchdog group. He says when an allegation comes in the church, the bishop doesn't have to pursue it very far.

"A bishop may decide at a very early stage that an allegation is without merit," he says. "And if he does that, we never even get to the stage of a priest being removed." 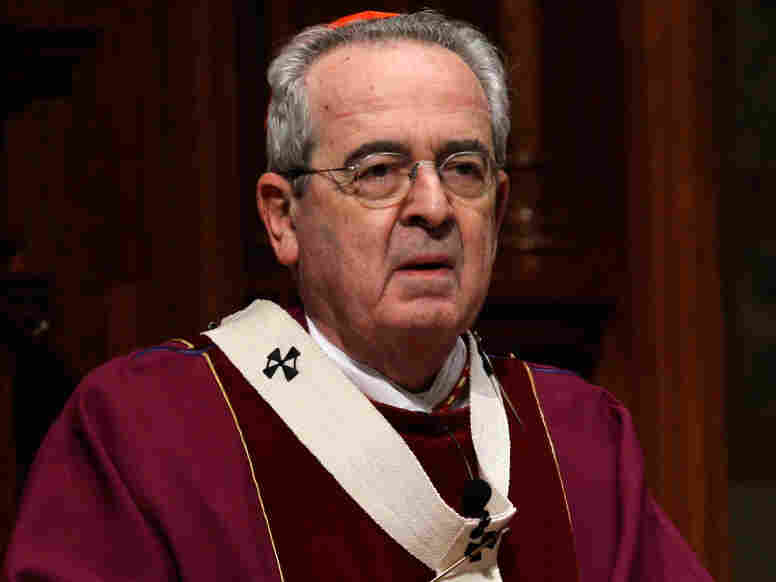 Archbishop of Philadelphia Cardinal Justin Rigali, who suspended the priests named in the grand jury's report, said he was "truly sorry" for harm done to victims and members of the community for "this great evil and crime." Matt Rourke/AP hide caption 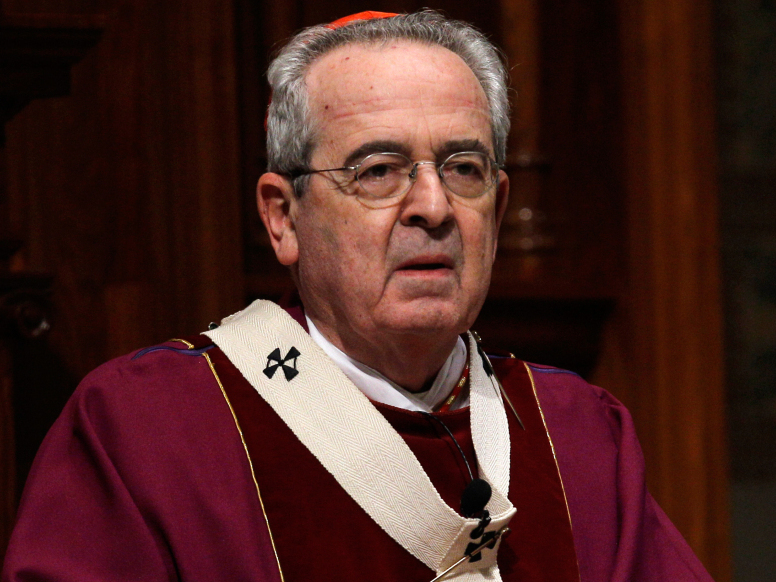 Archbishop of Philadelphia Cardinal Justin Rigali, who suspended the priests named in the grand jury's report, said he was "truly sorry" for harm done to victims and members of the community for "this great evil and crime."

McKiernan says he believes that's what happened in Philadelphia. He notes that the archdiocese forwarded only seven of the 21 cases to its review board, a panel of lay people who are supposed to hear every allegation of sexual abuse and act to protect the victims. Often, he says, the review board "doesn't know all the facts" because it is the bishop or his senior officials who decide which cases to present to the board.

Moreover, McKiernan and others say review boards sometimes "hold their punches" because they are handpicked by the bishop. In fact, the grand jury report excoriated the Philadelphia review board because it rejected every allegation it did hear as "unsubstantiated."

Philadelphia may not be alone, says William Gavin, a former FBI agent who was hired by the U.S. Conference of Catholic Bishops to audit each of the 195 Catholic dioceses each year and make sure they're preventing and reporting sex abuse cases. "It was an audit in quotes," he says. "I think it was more of a program review than anything else."

Gavin says he could ask whether a diocese is conducting background checks on priests and employees — but he was not allowed to look at records that would indicate whether there were any allegations against a priest.

"We didn't have the benefit of drilling down into personnel files to see what might be there," Gavin says. "They were off limits."

Gavin and his auditors had to depend on a bishop's word about whether anyone had been accused of abuse. In addition, the questionnaire they use wouldn't have spotted the Philadelphia 21 anyway. It only asks about allegations within the past year, not older cases.

Some believe the only way to get real answers is to have an outsider look at the priests' files.

"The only reason we know about this situation in Philadelphia is because a grand jury report has been issued, and a grand jury process has been looking at this archdiocese for years," McKiernan says. "I think if we had that kind of aggressive law enforcement in other dioceses, the same problems would be revealed."

McKiernan says they already have. In Cleveland, for example, the diocese said that 28 priests had been accused of abuse, but when a prosecutor looked at the files, the estimate went to 145.

When the New Hampshire attorney general looked at the files of the diocese of Manchester, 27 new names emerged.

And McKiernan has obtained an internal 2009 document from the Boston archdiocese that says there were 40 credibly accused priests whose names are still unknown to the public.

Even critics say that most dioceses are trying to do their best at protecting victims and still giving due process to priests who may have been wrongly accused. And that can be a difficult line to walk.

"Many people think the archdiocese doesn't get it," says Donna Farrell, a spokesperson for the archdiocese of Philadelphia. "We do. And the task, the job ahead of us, is to recognize where we've fallen short — and to let our actions speak to our resolve."

The faithful will surely be watching — and so will prosecutors.