Accessibility links
Italians Rescue Africans Fleeing 'Boiling' Libya The sleepy off-season of Linosa, a tiny, picture-perfect Southern Italian island, was disrupted by the sudden arrival of hundreds of refugees from Libya. They were mostly Eritreans and Somalis, and they said they were trying to escape violence and discrimination. 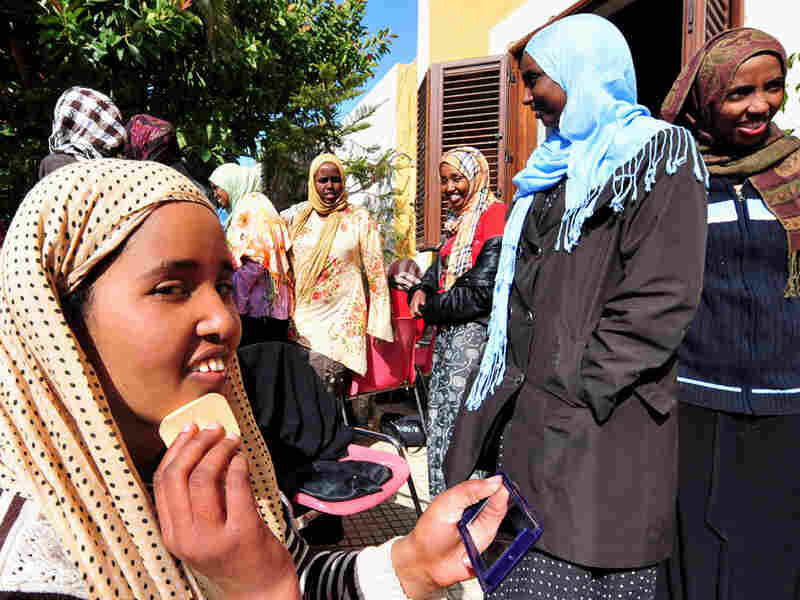 A young African woman who fled Libya puts on makeup as she rests with other female refugees Monday on the tiny Italian island of Linosa. Alberto Pizzoli/AFP/Getty Images hide caption

The sleepy off-season of Linosa, a tiny, picture-perfect Southern Italian island, was disrupted Sunday by the sudden arrival of hundreds of refugees from Libya — mostly Eritreans and Somalis.

The Italian coast guard had rescued about 1,000 people on three separate boats as they fled violence and discrimination in Libya.

The men were sheltered in a ruined port building and were eager to share their stories.

Muhammed Ali, a 33-year-old Somali, said each one paid up to $1,500 for the dangerous five-day crossing. They had no food or drinking water — all they were provided with was a satellite phone that didn't work.

"We did not have a proper route," he said. "Yesterday we were drifting. We did not [have] fuel; we [were] just drifting. ... When you look around, you only see water. The sea brought us here. It's by chance, it's by luck — we came here by luck."

'The Situation Is Just Boiling'

Ali was one of hundreds of thousands of foreigners who provided Libya with cheap labor — so cheap, he said, that often they weren't even paid. He, his wife and child experienced three years of discrimination and beatings.

But now, he said, Libya is even more dangerous than his homeland, Somalia.

"Even the young boys have guns there. Everybody has a gun there," Ali said. "Libya is not safe for anybody. ... [They] provide to everybody, every Libyan man who can carry and who even cannot carry a gun."

Ali said he had to leave because he was too scared even to go out.

"Because the situation is just boiling," Ali said. "You do not know who is with [Libyan leader Moammar] Gadhafi and who is not with Gadhafi. If you say Gadhafi is good, that's treason. If you say Gadhafi is bad, it's another, bigger treason. So you ... have to keep your mouth shut, and when somebody come and hold your shoulder and even abuse you and spit on you, you say thank you — what we say, 'malesh.' " 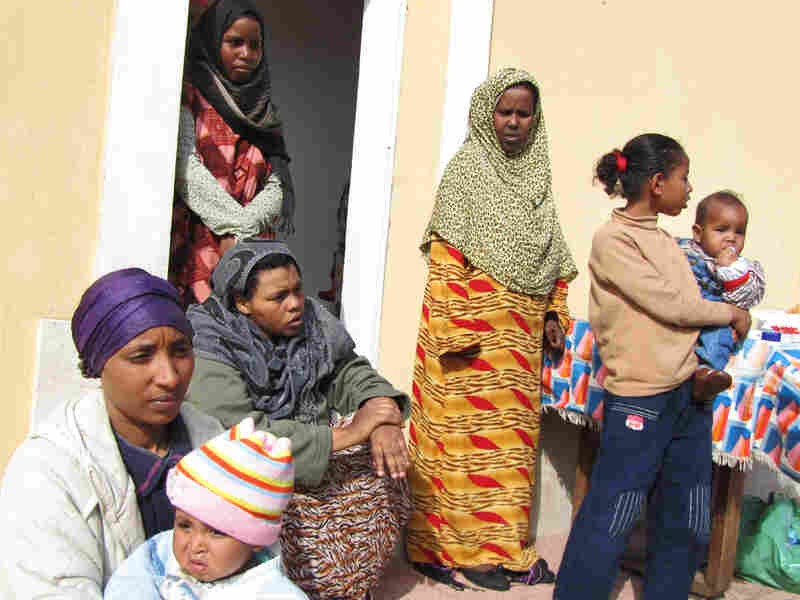 Eritrean and Somali refugees from Libya at an improvised shelter on the island of Linosa. Sylvia Poggioli/NPR hide caption

A mile away, a schoolroom has been turned into a shelter for women and children. With colorful headscarves, the women look proud and dignified, despite their shabby clothes.

Grace Fields, 29, is from Nigeria. She ran an African foods business in Tripoli. As with the other refugees, it's impossible to independently verify her story, but she said the Libyans are using the war to turn against foreigners and make money.

"They go to everybody's house and take their belongings," she said. "Somebody with gun, with knife. ... They make sure they collect everything you have. It's too much. They are killing."

Nearby, Amina Alehashe, 30, from Eritrea, tells a story of shattered dreams. She and many others began their trek across Africa years ago in the hopes of reaching Europe from Libyan shores.

But their hopes were crushed in 2008 when Libya and Italy signed a treaty under which Tripoli agreed to block all migrant boats in exchange for $7 billion.

Like all illegal immigrants, Alehashe was sent to a detention camp for six months — some of her friends for as much as a year. They were regularly beaten and kicked and received only one meal a day. 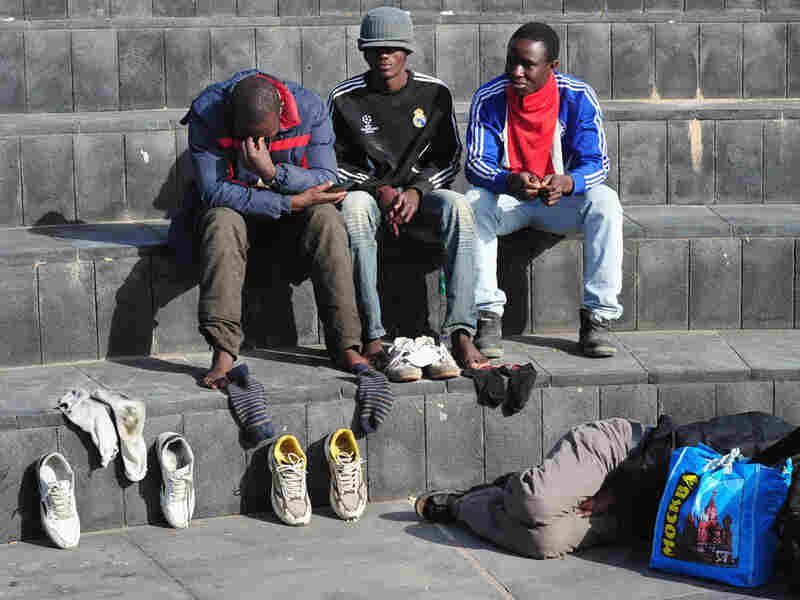 The toll of life in Libya on these Africans' health is immediately visible to Italian aid worker Claudia Rossetti. She says many of the men are emaciated and undernourished.

"And there are many pregnant women in this group," she said. "Several of them had miscarriages during the sea crossing. They are full of sores on their backs. They haven't been able to wash in weeks."

Later, Rossetti says she has reason to believe many of the women were sexually abused while in detention camps.

Before the refugees were transferred to Sicily, journalists offered use of their mobile phones so the refugees could call home.

The mood changed suddenly, and the women's faces broke out in broad smiles upon hearing the voices of loved ones far away.

They said they had been rescued, that they were now in Italy and "it's fantastic."