Accessibility links
Texas Republicans Take Harder Line On Immigration The relatively welcoming, tolerant attitude embraced by former Gov. George W. Bush is being overtaken by a flood of Arizona-style get-tough measures. And while legal challenges will surely follow if many of those measures pass, the debate in Texas is clearly shifting. 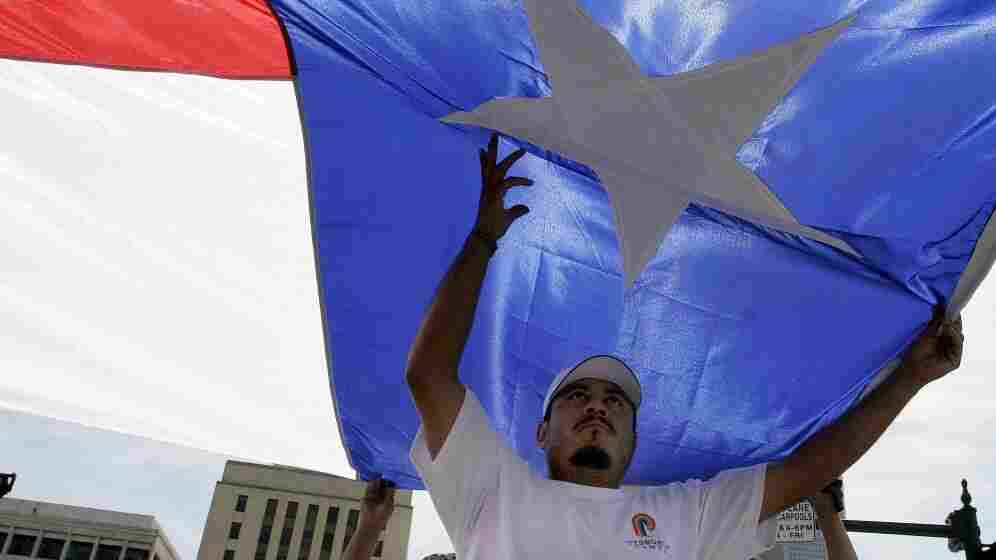 In 2006, Houston was among many cities participating in the nationwide National Day of Action for Immigration Justice rallies. When George W. Bush was governor, he adopted a Hispanic-friendly strategy that helped propel him to the White House. Now, some Texas Republicans are taking a harder stance. "I believe the Republican Party is throwing away their future," says one state Republican. Dave Einsel/Getty Images hide caption

In Texas, the Republican Party is changing its tactics on illegal immigration.

The relatively welcoming, tolerant attitude embraced by George W. Bush when he was governor is waning. It has been overtaken by a flood of Arizona-style get-tough measures, with nearly 100 immigration bills written or filed.

And while legal challenges will surely follow if many of those measures pass, the debate in Texas is clearly shifting.

The state is now more than ever in the nation's conservative vanguard. Among its most conservative leaders is state Rep. Leo Berman from northeast Texas. Though Berman's district is far from the Mexico border, he's leading the charge on immigration. One of his bills would "stop giving automatic citizenship to children born in Texas."

Most Hispanics right now do vote Democrat; there's no question about it. So what vote are we going after? We're going after a vote that doesn't vote Republican anyway.

There's also a voter ID bill; a bill that would require elementary school children to prove their citizenship upon enrolling — data that would then be turned over to state and federal authorities; and another Berman bill that would make English the official state language.

"That will shut off the state printing anything in any language but English," he says, "and that's going to save millions of dollars right there."

This is a significant change in strategy for the Texas GOP. In the mid '90s, Texas Republicans watched as their counterparts in California went on an anti-illegal immigration crusade and lost control of the state.

But in Texas, the economy was booming; the suburbs of Dallas, Houston, Austin and San Antonio were exploding; and thousands of illegal immigrants sat astride 2-by-4s, nail guns in hand, building those neighborhoods.

So, then-Gov. Bush and his man Karl Rove crafted a different strategy from their California colleagues: Hispanic-friendly.

The result? In 1998, George W. Bush crushed his Democratic opponent, getting nearly half the Hispanic vote — a triumph that placed him on the path to the presidency one year later.

The young governor learned his political style at his father's knee. Not only was George H.W. Bush a former president of the United States; he was a Texas oilman. And for generations, those independent oil producers, along with farmers and Texas ranchers, have employed inexpensive, hard-working Mexican laborers.

'Throwing Away Their Future'?

But in the halls of the Texas Capitol in 2011, Bush's approach is considered insufficiently conservative by most Republicans. The one powerful interest group that still thinks Bush had it right is the Texas Association of Business.

"If suddenly all the undocumented workers [in the state] were simply to go back to their home of origin, it would be disastrous for the Texas economy," says Bill Hammond, president of the group.

It is no exaggeration to say the membership of Hammond's group supplies the Texas Republican Party with a large measure of its fiscal lifeblood. On behalf of his clients, the thousands of big- and small-business owners in Texas, Hammond roams the state Capitol, trying to impart a bit of reality about the Lone Star State's economy.

"The impact on the Texas state economy of immigrant labor is about $17 billion a year," he says. "That's an enormous segment of our economy, and we simply would not be able to function without these people."

Until this year, Hammond and his Republican allies in the Texas Legislature have been able to kill most immigration bills in committee. Hammond would like to expand the immigration pipeline to allow more workers to legally enter the state. That proposal currently has zero chance.

"Today, 56 percent of Texans under the age of 25 are minorities. The growth in the population has been largely Hispanic over the last 10 years," he says. "I believe the Republican Party is throwing away their future."

A Plea To Tone Down The Rhetoric

Republican state Rep. Aaron Pena represents the border city of Hidalgo. "The tone of the debate is basically saying, 'We don't want you. ... This is a war over our culture. These people bring diseases into our country.' "

The tone of the debate is basically saying, 'We don't want you. ... This is a war over our culture. These people bring diseases into our country.'

He says the six Hispanic Republicans in the Texas House have been trying to persuade some of their colleagues to tone down the anti-Hispanic rhetoric.

"Many times, you won't see our handiwork out in public," he says. "It's done behind the scenes."

Pena says there are plenty of Texas Republicans who quietly share his concerns about the tone of the debate and its long-term effect on Hispanic voters.

But now, there are plenty who don't, including Berman. "Most Hispanics right now do vote Democrat; there's no question about it," Berman says. "So what vote are we going after? We're going after a vote that doesn't vote Republican anyway."

It's too early to tell how many of the dozens of bills will become law. While the Texas House seems hot for immigration bills, the Senate seems less so. It's distracted by a $27 billion budget deficit that's threatening to gut the state.