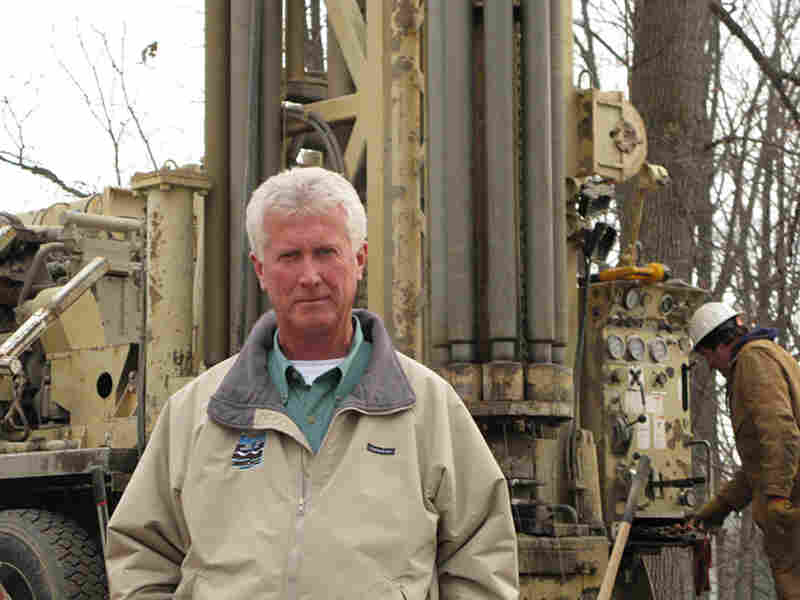 Mike Barlow has been installing geothermal systems for 20 years. But he says a 30 percent federal tax credit is increasing the popularity of the systems for families with modest houses. Elizabeth Shogren/NPR hide caption

Increasing numbers of homeowners are installing geothermal heat pumps, which take advantage of the constant temperature underground to provide more efficient heating and cooling. Initial costs are high, but a 30 percent federal tax credit can make the systems more affordable.

Suzi and James Bryant started thinking about going geothermal after their first winter in their house in Sterling, Va. It came with a rumbly 50-year-old oil furnace in the basement.

Last winter's oil bill was $2,000 and they didn't want a repeat of that. And they weren't looking forward to another summer with their aging air conditioner, which last year couldn't keep the house cooler than 80 degrees.

The Bryants had heard that geothermal systems can heat and cool homes with much less energy because they use the constant mild temperature underground. They did a lot of research, crunched the numbers and decided to take the plunge.

"We looked into it, and our payoff was three to seven years, so it kind of just made sense," says Suzi Bryant, an electrical engineer who is staying home to raise their three young children.

The Bryants are among a growing group of homeowners replacing conventional furnaces and air conditioners with geothermal heat pumps. Geothermal systems started getting more popular several years ago — but mostly for new construction. High initial costs for the systems could be wrapped into mortgages.

Mike Barlow, who has been installing geothermal systems for 20 years, says the tax credits are helping broaden his clientele.

Barlow's crew drills holes 35 stories deep through the clay and rock in an upscale suburb of Baltimore, Md. They use a powerful rig.

When the drilling is done, Barlow's team pushes hundreds of feet of black piping into the hole to create what's called a loop. A mixture of water and anti-freeze will circulate through four such loops and to a heat pump inside the house.

"We circulate water down one side of the loop and back up the other side. And that's where we get our heat exchange," Barlow says.

The system will take advantage of the fact that the temperature underground stays constant year round. In this part of Maryland, it's about 56.5 degrees. 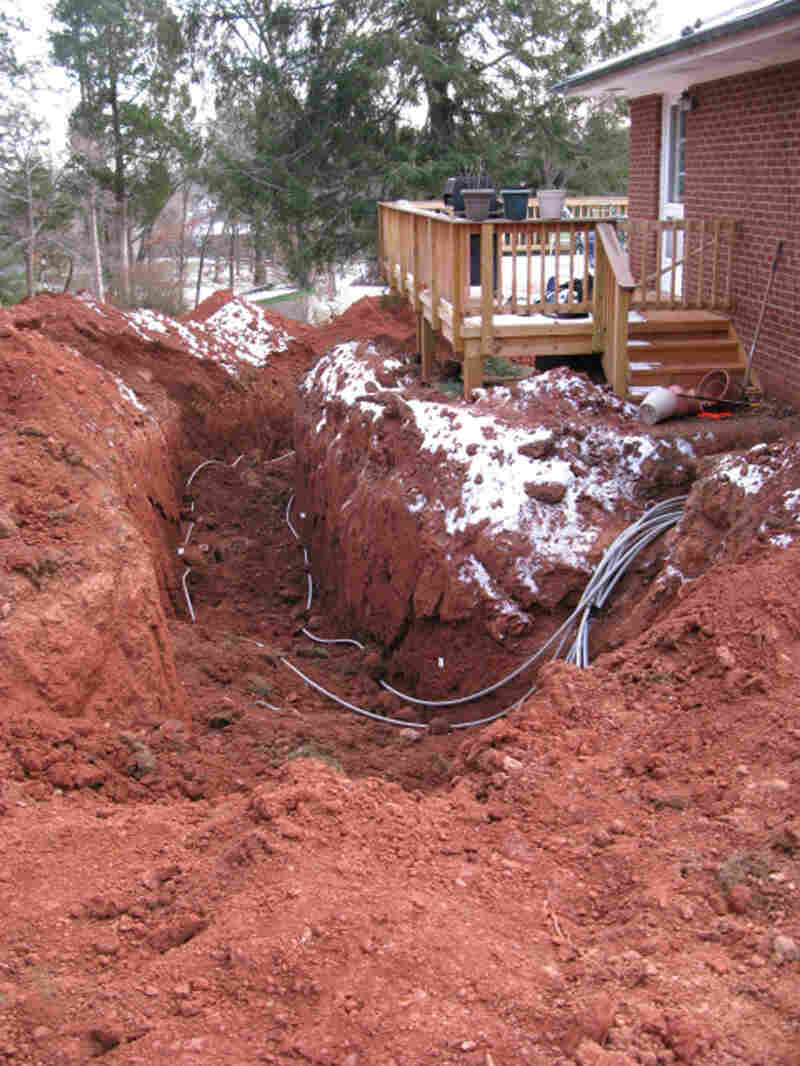 Homeowners Suzi and James Bryant opted to install a geothermal system. To save some money, they rented a backhoe and dug a deep ditch in their side yard for the project. Elizabeth Shogren/NPR hide caption

"What you do is you capture that 56.5 in the winter time, and you use that to heat the home. It takes very little energy to complement that," Barlow says.

The same is true in the summer: It takes relatively little energy to keep a house at a comfortable temperature.

Traditional air-source heat pumps have to work a lot harder. In winter, they have to suck what heat there is out of, say, 30-degree air, and in the summer they have to cool outdoor air from, say, 90 degrees.

It Was Good Enough For Cavemen

Barlow says the basic geothermal technology is so simple that even the cavemen figured it out.

"You're basically doing what they did by staying in a cave in the winter to stay warm and they stayed in a cave in the summer to stay cool," he says. "It's a very good way of having green energy. So, it will help generations to come as far as their dependence on fossil fuel and protection of the planet in general."

Despite the lofty benefits — and the smaller electric bills — geothermal systems still make up only about 1 percent of the heating and cooling systems sold each year. They're not nearly as well known as solar panels.

"It's doesn't have the sex appeal that solar does because most of it is all buried underground," Barlow says. "We as a society like to show you our neat things. So, I think that's why it hasn't caught on quite as well."

There's another downside to geothermal over solar: It can make quite a mess of yards and landscaping.

But the two technologies have something common: Their initial price tags chase lots of people away.

"The initial cost is a shock," says Jim Keicer, as he installs the Bryants' system.

As he crouches under the basement stairs, flushing water through the new geothermal heat pump, Keicer says his clients like the systems once they have them.

But he has not put geothermal in his own house. "I wish I could afford it," he says.

The Bryants expect to spend about $20,000 to install the system in their 1,900-square-foot, three-bedroom ranch house. But their price is lower than most because they did everything they could to keep costs down.

They even rented a backhoe and James Bryant, who had never operated one before, dug a deep trench in their side yard for the loops.

Suzi Bryant says they're thinking about the future.

"Don't you have to? With three little kids, that's the only way to think — save money right? Plus the tax credit doesn't hurt," she says.

I checked in with the Bryants after they'd had their geothermal system for two months. They say it took a while to get the bugs out, but now it works perfectly.

Their yard is still a mess, but they'll be planting grass soon. And they're already cashing in.

They spent only about $100 a month to heat their house in January and February. That's just a fraction of the $600 a month they spent last year with their old oil furnace.