Accessibility links
FDA Probes Link Between Food Dyes, Kids' Behavior The Food and Drug Administration is meeting Wednesday and Thursday to examine whether artificial food dyes cause hyperactivity in children. Recent studies have drawn this link, causing some experts to call on the FDA to ban the dyes — or at least require a warning label. 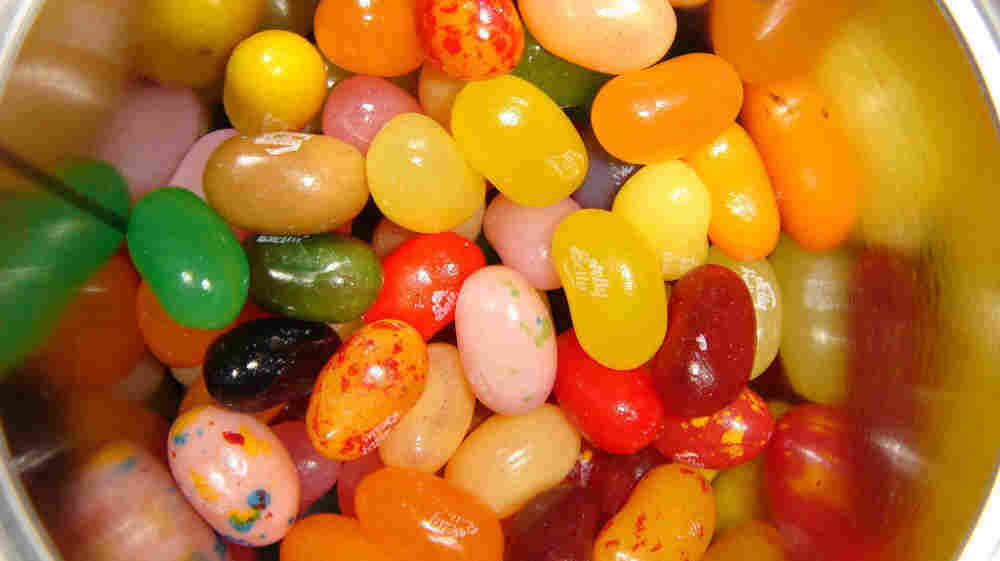 See a list of the food dyes that the FDA is considering banning — and the foods they are commonly found in.

The Food and Drug Administration is meeting Wednesday and Thursday to examine whether artificial food dyes cause hyperactivity in children. Artificial food dyes are made from petroleum and approved for use by the FDA to enhance the color of processed foods.

They've been around for decades and are found in everything from pudding to potato chips to soft drinks.

But recent studies linking food coloring to hyperactivity in kids is causing some experts to call on the FDA to ban foods containing them — or at least require a warning label.

Christine Woodman of Fairfax, Va., first noticed her children were having trouble focusing on school projects and were acting way too reckless at home when they were in elementary school. She suspected they might have ADHD.

Woodman's daughter, Dawnielle, is 19 now, but she remembers a particular incident: the time she thought it would be fun to take some blankets from her bed and slide down the basement stairs on them.

"It was really fun and funny until I got my head stuck in the wall," Dawnielle says.

Christine was reluctant at first to take her kids to the doctor for their hyperactive behavior. She lived in the Pacific Northwest at the time, and the family embraced a theme common among their friends and neighbors.

"What is natural is good; what isn't natural was bad," she remembers. 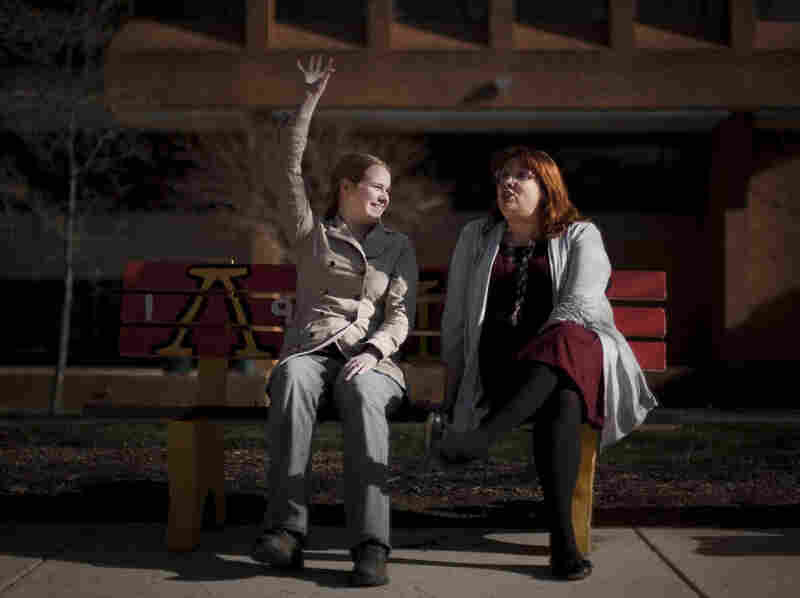 Christine Woodman (right) and her daughter, Dawnielle. When Dawnielle was younger, Christine tried eliminating artificial food coloring from Dawnielle's diet to treat her hyperactivity. But she says Dawnielle's behavior didn't change until she was diagnosed with ADHD and given medication. Jonathan Makiri/NPR hide caption 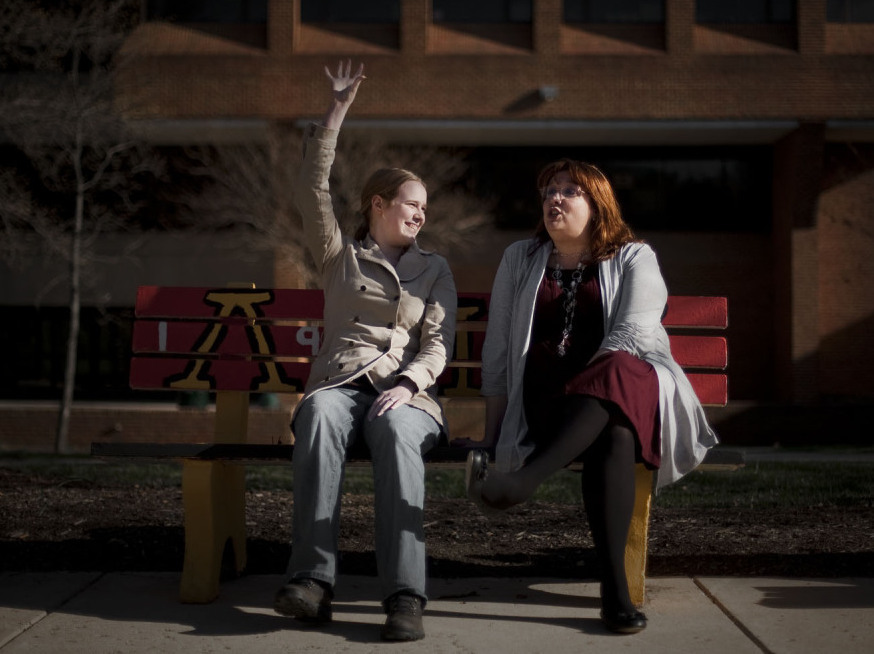 Christine Woodman (right) and her daughter, Dawnielle. When Dawnielle was younger, Christine tried eliminating artificial food coloring from Dawnielle's diet to treat her hyperactivity. But she says Dawnielle's behavior didn't change until she was diagnosed with ADHD and given medication.

On the advice of friends, Christine decided to start by cutting out foods with artificial coloring, but Dawnielle didn't really go for it. She missed her favorite oatmeal with little red-colored dinosaurs in it. Christine tried a substitute. "You know, I made the oatmeal with blueberries and soymilk and thought you would be happy with it," she says to Dawnielle.

"I was not. That was not a good replacement," Dawnielle says, laughing.

But it was tough back then. After a year of trying various diets — from eliminating food dyes to eliminating dairy — her children's behavior never really changed, Christine says.

She finally took them to a pediatrician, who diagnosed them with ADHD and prescribed medication. The difference was stunning, Christine says.

A lot of people try "elimination diets" to address their kids' behavior, and many say they work. The diet idea dates back to the1970s, when pediatrician Benjamin Feingold first claimed that there was a link between behavior and food dyes.

The diet he prescribed eliminated food dyes and other food additives, like the common preservatives BHT and BHA.

Artificial food dyes might be an easy target for elimination because they aren't essential to food.

"Food dyes are added simply for their color to make foods fun. They serve no health purpose whatsoever," says Michael Jacobson, director of the Center for Science in the Public Interest.

CSPI wants the FDA to ban eight artificial food dyes. Jacobson is particularly concerned with Red No. 40, Yellow No. 5 and Yellow No. 6, which make up 90 percent of the food dyes on the market.

Some of the studies are difficult or imperfect. ... But there is this body of literature that does suggest that food colorings are not as benign as people have been led to believe.

Their use has gone up fivefold in the past 50 years. "That's a good indication of how much junk food we're consuming," he says.

Jacobson says there is substantial evidence showing that food dyes trigger hyperactivity in kids. But other experts question that conclusion.

Before Wednesday's meeting, the FDA released its analysis of 35 years of scientific studies. It finds no conclusive proof that food dyes cause hyperactivity in most kids, although it suggests that some kids with ADHD may be particularly sensitive to them.

Andrew Adesman, chief of developmental and behavioral pediatrics at the Steven and Alexandra Cohen Children's Medical Center of New York, says more studies are needed and that the current studies leave a lot of room for doubt.

"Some of the studies are difficult or imperfect in that they don't always tease out specific chemicals in isolation," he says. "But there is this body of literature that does suggest that food colorings are not as benign as people have been led to believe."

A 2007 British study known as the Southampton study has become something of a flashpoint in the current debate. In it, 3- and 8-year-olds were given two kinds of drinks that contained a mix of dyes. Afterward, parents reported a significant increase in hyperactivity. But teachers and independent observers didn't, critics say. Also, because the dyes were mixed together, it's hard to tell which might be causing a problem.

"It gives you pause, but it's certainly not convincing evidence that there's a problem," says Julie Miller Jones, professor emeritus of nutrition at St. Catherine University in St. Paul, Minn.

But Adesman, the pediatrician, says if parents are concerned, there is no harm in cutting out food dyes if they can manage it.

"We're not putting food coloring into broccoli or other fresh fruits and vegetables. It's going into processed foods, concentrated sweets, things like that," Adesman says.

Despite concerns with the British study, European lawmakers now require a warning label on foods that contain artificial dyes. It lets parents know their kids might become hyperactive if they consume the product.

Joseph Borzelleca, a professor of pharmacology and toxicology at the Virginia Commonwealth University medical school, will be testifying at the FDA meeting on the safety and functionality of food dyes. He says food dyes are rigorously tested and have a long and safe history.

The Center for Science in the Public Interest is asking the FDA to ban these artificial food dyes.