Accessibility links
Arab Revolutions Inspire Afghan Youth People in Afghanistan, especially the young, have closely followed developments across Muslim countries in the Middle East and North Africa. Many of them say they draw inspiration from Egyptians and Tunisians, and admire their courage in managing to organize and topple their respective governments. 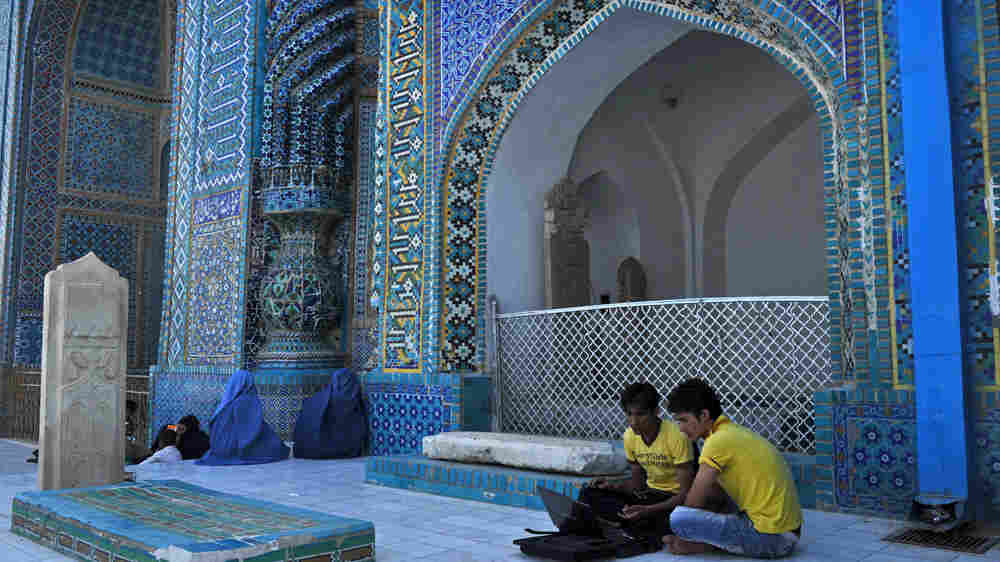 After watching the protests that led to the downfall of regimes in Egypt and Tunisia, Afghan youth are expressing revolutionary sentiments.

"I am counting seconds for the day when 20 of my friends call me and ask me to go out on the streets to protest against the notoriously corrupt government of [Afghan President Hamid Karzai] and the violence of the Taliban," says 19-year-old university student Ahmad Seyar.

People in Afghanistan, especially the young, have been closely following the developments across Muslim countries in the Middle East and North Africa. Many of them say they draw inspiration from Egyptians and Tunisians, and admire their courage in managing to organize and topple their respective governments.

Many of the youth activists in the country are now searching for ways to stage similar protests in Kabul and other cities against government corruption and ongoing violence by the Taliban.

Asad, an unemployed college graduate who goes by one name like many Afghans, says he has been inspired by the revolution in Egypt.

"I have been researching on the Internet to find out how the Egyptian youth got organized online and how this model could be applied within an Afghan context," he says. "Although Afghans are not Arabs, and realities are different here politically, economically and socially, Afghans have similar grievances that have come about because of the rampant corruption in the government, increasing violence, lack of job opportunities, nepotism, etc."

I am counting seconds for the day when 20 of my friends call me and ask me to go out on the streets to protest against the notoriously corrupt government of [Afghan President Hamid Karzai] and the violence of the Taliban.

Afghanistan's population is very young. According to the national census two years ago, 67 percent of the population is younger than 25. Most of the youth, particularly those living in big cities in Afghanistan, are tech-savvy and educated.

According to the Afghan ministry of telecommunication, more than 80 percent of Afghans have access to mobile phones.

The post-Taliban boom in media, particularly the establishment of an increasing number of new private TV channels, has exposed Afghans to a new world that they did not know 10 years ago. But unemployment among the youth remains high — and many also suffer from illicit drug use and rising violence.

With the worsening security situation in Afghanistan, and the lack of educational and job opportunities, many of the youth are pessimistic about their futures. They say the Afghan government has failed to respond to their increasing dissatisfaction.

Afghans who have access to the Internet have gone online to express their grievances and rage. Popular social networking sites such as Facebook and Twitter have become a gathering point for Afghan youth to communicate with each other. And since the recent events in the Arab world, such sites also have become an outlet for Afghan youth to organize for political activities.

Many pages have been created on Facebook calling on Afghans to mobilize and stage protests against Karzai, whose popularity has been on a downward spiral since 2005. The president's failure to tackle increasing corruption, rising violence and the high unemployment rate has contributed to general dissatisfaction and resentment among the population.

Some of the social networking pages have adopted slogans and logos similar to those of the protesters in the Arab world. These slogans are aimed at Karzai and his administration, the Taliban and the warlords.

On Facebook, one of the comments accusing both the Afghan government and the international community of failing to deliver to the Afghan people says: "This is the moment for Afghans to take the lead and be the organizer. Nobody can help Afghans unless we rise to the occasion and demand changes."

Another comment posted by a young Afghan girl says: "I was born in Tunisia, lived in Egypt and gave my blood in Libya. I was beaten in Yemen, passing through Bahrain and Saudi Arabia. ... I will grow up in the Arab world ... till I reach AFGHANISTAN. My name is 'LIBERTY.' "

A Threat To The Government?

Sanjar Sohail, editor-in-chief of Afghanistan's largest newspaper, 8AM, says the momentum building for protests among the youth in Afghanistan does pose a threat to the government.

"The government feels very vulnerable because of its failure to meet even the basic needs of the people and its involvement in corruption and other wrongdoings," he said.

Sohail also says that even though Afghans have not yet gone out on the streets, the debate continues on how to organize peaceful and nonviolent protests.

The government feels very vulnerable because of its failure to meet even the basic needs of the people and its involvement in corruption and other wrongdoings.

Sanjar Sohail, editor-in-chief of 8AM

Afghanistan does not have established and mature political parties. Rulers usually rely on traditional powerbrokers and warlords for stability and political support.

"Those in power in the current government fear widespread protests in Afghanistan because it threatens traditional power structures, which powerbrokers have relied on for centuries," says Reza Fazli, an Afghan researcher working for The Liaison Office. "As Afghanistan opens to the rest of the world, the threat to traditional power bases increases."

Calls for protests against the government have alarmed some officials in President Karzai's administration. However, there has not been an official response from the government. A number of religious leaders and former warlords have called on the government to take the threat of protests by the "Facebook Generation" seriously.

Burhaneddin Rabbani, who was president of Afghanistan during the civil war in the 1990s and now leads the peace council that was formed to spearhead negotiations with the Taliban, warned a recent gathering of religious leaders.

"If the religious scholars don't play their leadership role in the society, power will fall into the hands of the Internet and Facebook youth," he said, citing the recent developments in Egypt and Tunisia.

After Rabbani's speech, there was a dramatic rise in Facebook comments by the youth celebrating the longtime powerbrokers' fear of the "Internet generation."

The rage among Afghan youth may not be as intense as that of those in Tunisia and Egypt, but the perpetuation of the current trend of discontent could lead to a significant challenge to the traditional rulers of the country.