Accessibility links
With Rebels In Retreat, What Are U.S. Options? As Libyan leader Moammar Gadhafi's forces push back anti-government fighters, talk of sending in arms to the rebels has gotten more serious. But the Obama administration hopes other measures, like stepped-up airstrikes, might halt that momentum. 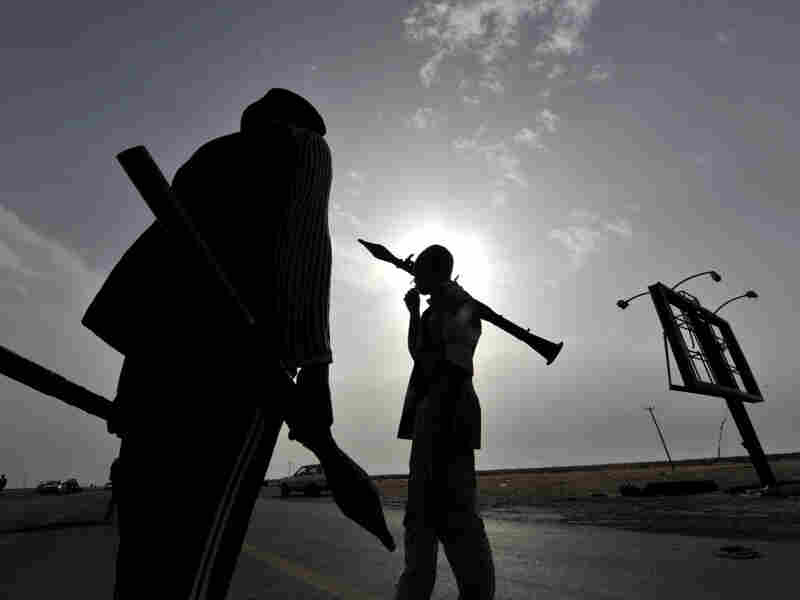 Libyan rebels carry rocket-propelled grenades as they take position at the west gate of the eastern city of Ajdabiya on Wednesday. Aris Messinis/AFP/Getty Images hide caption 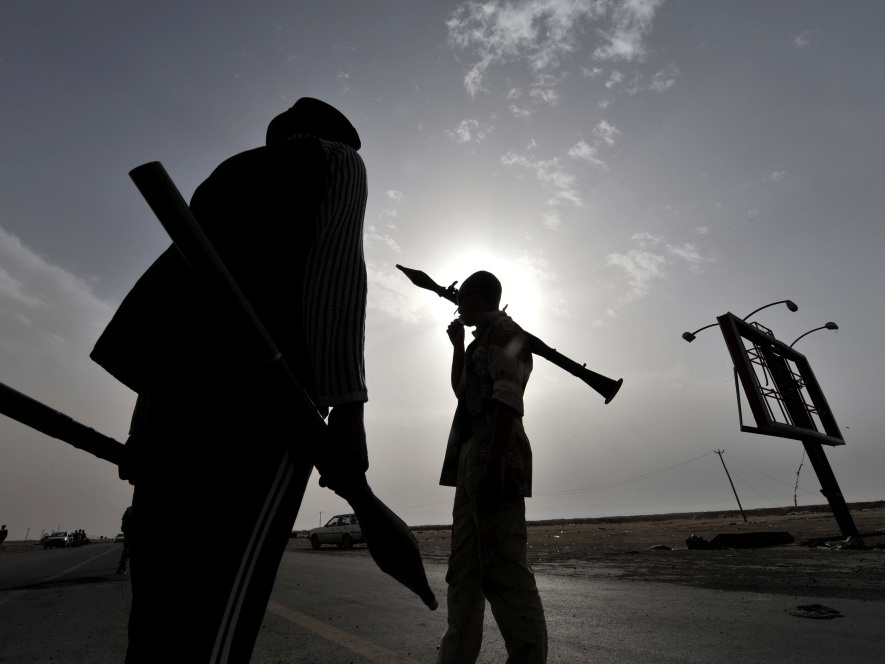 Libyan rebels carry rocket-propelled grenades as they take position at the west gate of the eastern city of Ajdabiya on Wednesday.

Air attacks on Libya began nearly two weeks ago with what seemed to be a simple goal: protecting civilians and preventing the rebel-held city of Benghazi from being overrun.

Those attacks have evolved into something more. The U.S. has used powerful, low-flying attack planes to target forces inside Libyan cities.

There is also serious talk about taking another step: arming the rebels who are opposing Libyan leader Moammar Gadhafi.

President Obama says it's being considered. "I'm not ruling it out, but I'm also not ruling it in," he told NBC. "We're still making an assessment, partly about what Gadhafi's forces are going to be doing."

What Gadhafi's forces are doing is pushing the rebels back with mortar and artillery fire. Before escalating — and arming the rebels — the Obama administration hopes other measures might halt that momentum.

In the past few days, the Americans brought in more firepower for that job — two warplanes specially designed to target Libyan troops hiding among civilians in cities. One is the A-10 Warthog; the other is the AC-130 gunship. Both are armed with cannons and Gatling guns.

Obama told NBC these airstrikes could determine the coalition's future course in Libya.

"Do we start getting to a stage where Gadhafi's forces are sufficiently degraded, where it may not be necessary to arm opposition groups? But we're not taking anything off the table at this point," he said.

To Arm Or Not To Arm

But if airstrikes are not enough, arming the rebels is the next option — giving them some type of anti-tank weapon or rocket-propelled grenades.

"If their defeat is to be prevented, it's inevitable that they get weapons from somewhere else," says Frank Anderson, president of the Middle East Policy Council, a nonpartisan think tank. In the 1980s, he worked with the CIA, training Afghan rebels to fight the Soviets.

But here's an important detail to keep in mind: Sending in weapons also means sending in someone to train the rebels to use the weapons.

"You don't need specialists. What you need is someone who can teach very simple tactical behaviors," Anderson says. "It doesn't take a long time."

Those trainers wouldn't have to come from the United States.

Still, if the Obama administration is looking for a quick and painless way to shift the balance of power on the ground, arming the rebels may not do it.

"I don't think there's really a quick fix to the shortcomings of the rebels," says Andrew Exum, a defense analyst who has advised the Pentagon. "The bottom line is the rebels are few in number; they're poorly organized; they do not have a trained cadre of fighters. And if anything's holding them back, it probably has to do more with the inability to effectively fire and maneuver than weaponry."

There's one more option: coordinating airstrikes with the rebels. Anderson, the former CIA operative, says that's what led to the fall of the Taliban in Afghanistan in 2001.

"You had [a] Special Forces staff sergeant or a young lieutenant or a CIA operative with a GPS and a radio embedded with the friendly forces, and they were able to call down precision airstrikes," he says.

At this point, U.S. officials say they're not coordinating airstrikes with the rebels and they're only discussing arming them.

Either option means a major escalation: coalition forces or operatives on the ground helping the rebels.