Accessibility links
In Japan, Scenes Of Much Destruction, Little Looting In the town of Kamaishi, the black tide killed at least 600 people, threw an ocean freighter onto the wharf and blew open thousands of houses and shops, leaving many things to steal. But there have been few documented reports of thievery since the tsunami, in contrast to widespread looting that has happened after disasters in other countries. 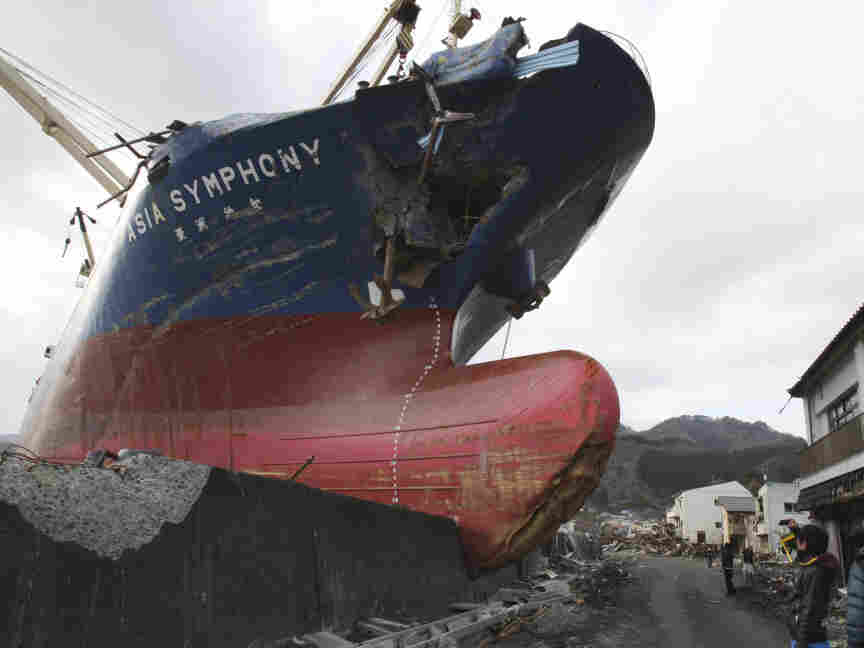 People look at a grounded cargo ship on a pier in Kamaishi port in Kamaishi, Japan, on Saturday. The March 11 earthquake and tsunami devastated the area. Koji Sasahara/AP hide caption 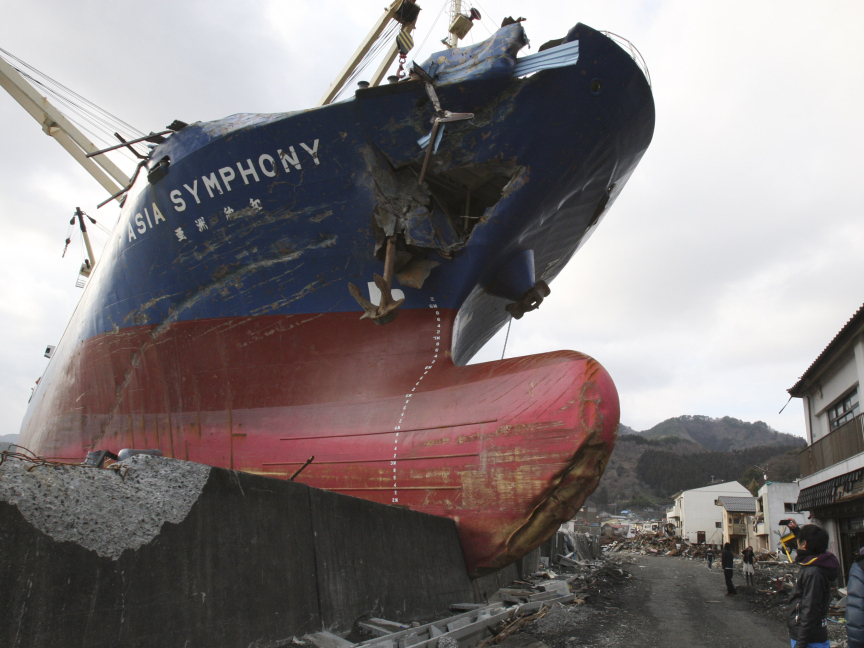 People look at a grounded cargo ship on a pier in Kamaishi port in Kamaishi, Japan, on Saturday. The March 11 earthquake and tsunami devastated the area.

In the weeks following the tsunami, there have been relatively few documented reports of thievery in the devastated coastal cities of northeastern Japan. That's in contrast to widespread looting that has been reported after natural disasters in other countries.

To find out why, we visit the town of Kamaishi, where the black tide killed at least 600 people, threw an ocean freighter onto the wharf and blew open thousands of houses and shops, leaving many things to steal.

There have been media reports of limited looting elsewhere: an ATM pried open, gas siphoned from disabled vehicles, stolen food, water and beer. What about in this town? 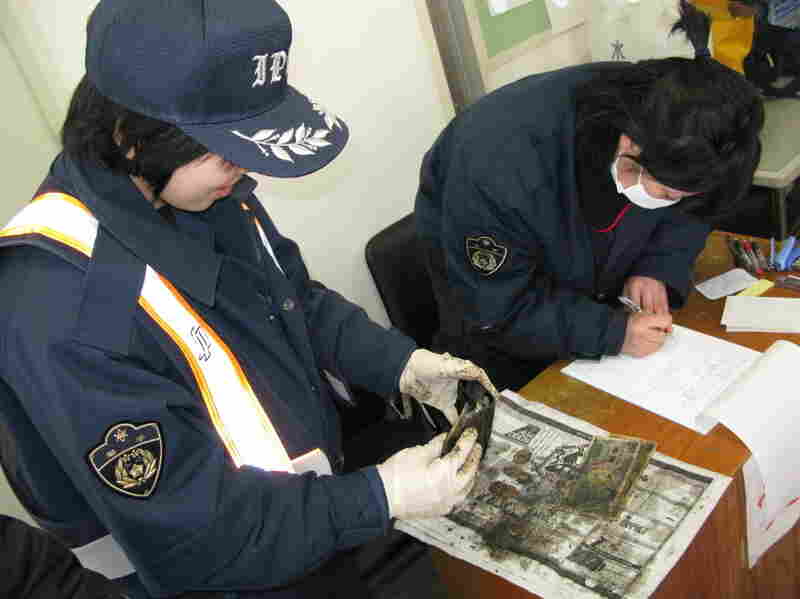 One of the soggy wallets that have been brought into the Kamaishi police department following the tsunami. John Burnett/NPR hide caption 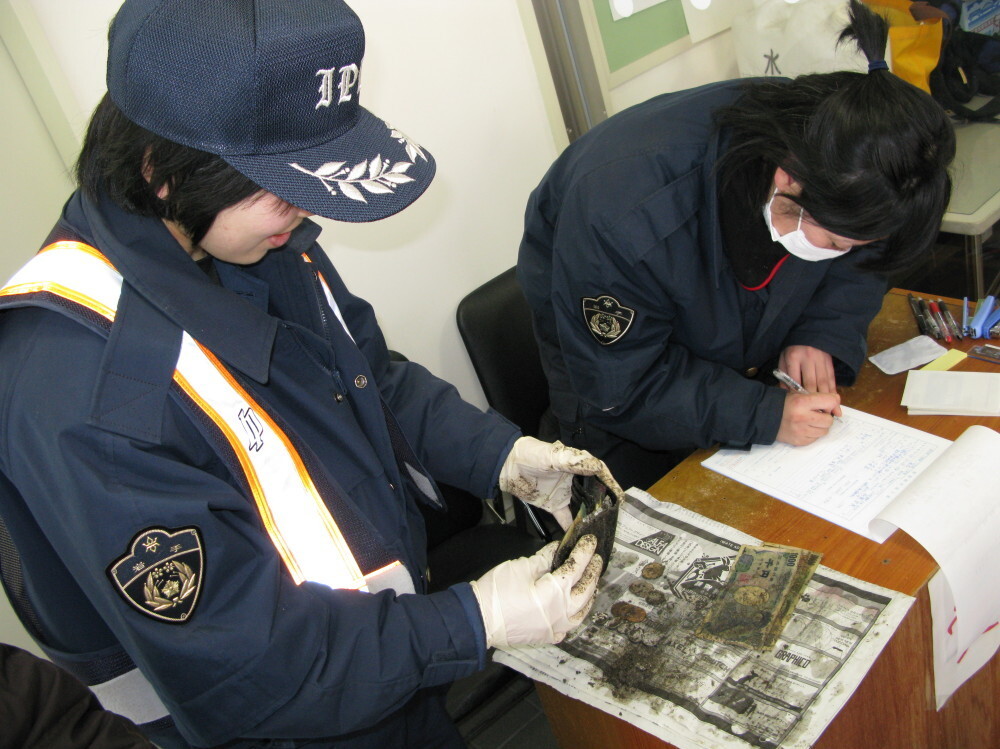 One of the soggy wallets that have been brought into the Kamaishi police department following the tsunami.

"We have some reports, confirmed reports, that some money or bicycles were stolen from the house or shops. We confirmed it's not washed away by the tsunami, but somebody else did it," says Hironori Kodashima, the vice police chief. He's standing in front of the temporary police station, wearing a plain blue worksuit because his uniform was washed away.

Just then, a woman walks into the police station holding a soggy wallet. It has the equivalent of $150 in it. I ask a policewoman if this is common.

"Actually, we get a lot because lots of wallets are washed away, so lots of them are found," she says.

My translator and I want to find out if local people have heard about any burglaries after the tsunami. I remember some of the Hurricane Katrina survivors in New Orleans who hauled off liquor bottles, Nike sneakers and flat-screen TVs. But Japanese speak of their culture of shame, haji, which frowns on committing an act that would disgrace one's family.

In Kamaishi, about half of the 15 people we talk to over the course of the day say they haven't heard of any looting. The other half say they've heard of other people's homes or shops being broken into, but it hasn't happened to them.

Some say they heard there was a lot of stealing in the seaside village of Unosumai, which is 10 minutes away, so we go there. 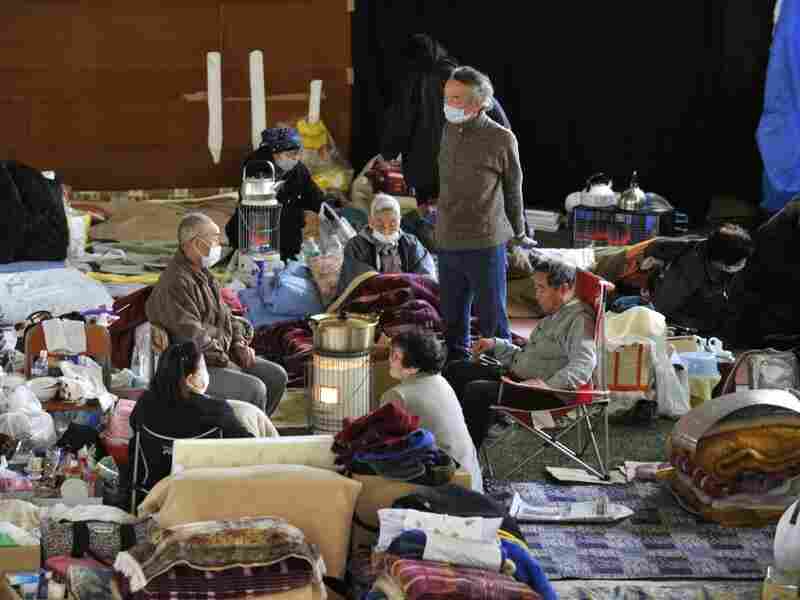 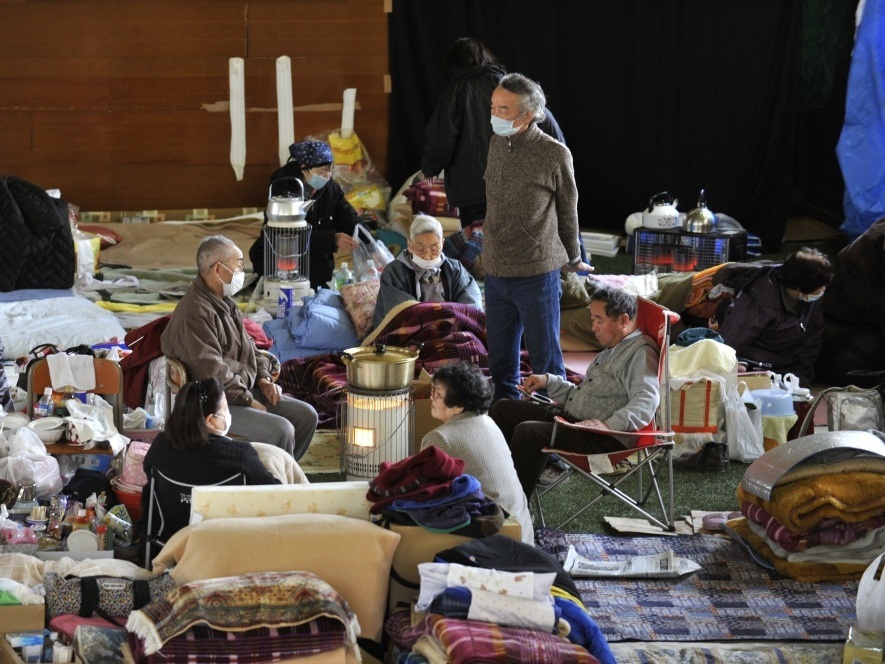 Evacuees rest in a shelter in Kamaishi, Japan, on March 25.

The scene is even worse than in Kamaishi: utter obliteration. The contents of happy homes litter the gray sand: a broken teacup, a futon, a mahjong tile, a statue of a smiling Buddha. The only sound in this wasteland is a ghostly announcement by the local government for free hot baths.

What about thievery here? It's the same story as in Kamaishi: People have heard vaguely about burglars, but no one has firsthand knowledge. The only actual sighting here was by my translator, Chie Kobayashi. She says she saw two young men carry some toilet paper and other items out of a shattered drug store when she was here about a week ago.

By the end of the day, the we have one concrete crime report: Tetsuhiko Kikuchi, a 68-year-old dry cleaner, says someone stole some food from his apartment the day after the tsunami. A few days later, he came to check on his place and found some valuables missing.

"The necklaces and watches — all small stuff," he says.

But people are clearly worried. They're patrolling their own neighborhoods. There's a rumor circulating that the thieves are gaikokujin — foreigners.

Pernicious rumors in the aftermath of great disasters in this country have a historic precedent. After the Great Kanto earthquake of 1923, rumors that foreigners were poisoning wells and committing arson and robbery led to the mass murders of Koreans by Japanese mobs.

If anyone would know whether there are thieves about, it's the shobodan, the ubiquitous blue-jacketed volunteer firemen who patrol the city every night. In Kamaishi, their chief is Matsuo Wada, a stern 67-year-old retired city councilman.

No, he says, they haven't encountered a single looter.

"Kamaishi is a very safe city," he says. "We have received information that there are foreigners walking around committing crimes." He raises his eyebrows skeptically. "I cannot tell you if it's true or not."