Accessibility links
The Nation: Taking Aim At The Military Budget As Congress attempts to work through the budget cut stalemate, Robert Dreyfuss of The Nation takes a look at defense spending, and argues that economic crisis, deficit mania and war weariness have created political momentum for big cuts to military spending.

The Nation: Taking Aim At The Military Budget

The Nation: Taking Aim At The Military Budget 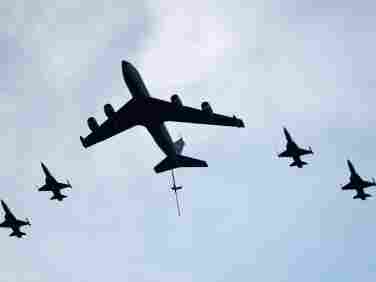 Click Here To Read Another Opinion On Military Spending

Robert Dreyfuss is a contributing editor to The Nation.

For the first time since the end of the cold war, there's a real possibility that the post-9/11 fever that sent U.S. military spending shooting upward will break and that the Pentagon's budget will fall sharply. But it won't be easy.

On the surface, it might not seem as if cuts are in the offing. After thirteen consecutive years of growth, between 1998 and 2011, spending on the military has reached an all-time high, and for 2012 Defense Secretary Robert Gates is asking Congress to authorize yet another increase, seeking $553 billion, plus an additional $118 billion for Iraq and Afghanistan, for a total of $671 billion. Not only is the White House seeking more money; Congress — even with the deficit-obsessed, Tea Party/Republican majority in the House — has so far refused to wield the budget ax against the Defense Department.

Yet longtime analysts say a confluence of events has emerged that will change that. "Five years from now, we'll turn around and the defense budget will be a lot lower than we thought it was going to be five years ago, and we'll look back and say, Wow," says Gordon Adams, a Stimson Center fellow and American University professor who's been analyzing military spending for four decades.

That's not because the military-industrial complex is ready for cuts. The so-called Iron Triangle, the powerful nexus that includes the Pentagon, military contractors and lobbyists, and hawks on the Congressional armed services committees, will resist cuts every step of the way. "If you leave it to the Iron Triangle, it won't come down," says Adams. "But it will come down, and what will drive it are the outside variables, which create a tidal wave that hits defense spending." What's creating that wave, say Adams and other experts, are two intersecting currents. A politics of debt and deficit reduction has taken hold in Washington, tied to an economic crisis that has convinced many that the United States can no longer afford an oversized Pentagon. And for the public, the decade-long trauma of 9/11, which fueled the "war on terror," has finally begun to ease. War-weary Americans have turned decisively against the conflicts in Afghanistan and Iraq, and, according to polls, voters support cuts in military spending. All that creates space on Capitol Hill to take on the Iron Triangle.

Winslow Wheeler, director of the Straus Military Reform Project at the liberal Center for Defense Information and editor of the new book The Pentagon Labyrinth, points to major studies by think tanks and task forces calling for sweeping military cuts as a sign that things are changing. "We're in a period of a shift in tectonic plates when it comes to the defense budget," he says.

In 2010 a series of high-powered reports called for big cuts in military spending, with each projecting reductions of 15-20 percent of the Pentagon budget. In June the Sustainable Defense Task Force, organized by Representatives Barney Frank and Ron Paul, outlined a plan to cut $960 billion between 2011 and 2020, including cuts in the nuclear arsenal, troop deployments in Europe and Asia, the size of the Navy, a wide range of costly weapons systems and reforms in military pay scales and the Pentagon's healthcare system. In September the libertarian Cato Institute published a report, "Budgetary Savings From Military Restraint," that outlined $1.2 trillion in cuts over ten years, including a one-third reduction in the troop strength of the Army and Marines. In November a debt-reduction task force organized by the centrist, establishment-oriented Bipartisan Policy Center released a plan, "Restoring America's Future," that proposed a five-year freeze in Defense Department spending at current levels and then a cap on future growth, which would save $1.1 trillion over a decade.

But the most startling report of all was released in December by the bipartisan National Commission on Fiscal Responsibility and Reform, created by President Obama and chaired by former Republican Senator Alan Simpson and Democrat Erskine Bowles, who served as President Clinton's White House chief of staff. Though it fudged the numbers a bit, making it hard to pin down how far its proposed cuts would go, the panel's reductions in military spending could amount to as much as $650 billion to $1 trillion over ten years. "The Simpson-Bowles commission came up with nearly a trillion dollars in cuts, and nobody blinked an eye," says Wheeler.

Well, almost nobody. A coalition of hawkish think tanks — led by the American Enterprise Institute, the Heritage Foundation and the Foreign Policy Initiative, a neoconservative outfit led by William Kristol of The Weekly Standard — lambasted the Simpson-Bowles report as a mortal threat. The coalition, Defending Defense, has trotted out claims about China's military power, the threat of radical Islam and the need to maintain US hegemony worldwide in its effort to rally support for the military establishment. They're alarmed at the sudden erosion of support for the Pentagon in the Republican Party — not only among libertarian, often isolationist Tea Party types but among traditional Republicans, too.

According to Capitol Hill lobbyists and think-tank military analysts, a contingent of Republican stalwarts — including Senators Tom Coburn and Mike Crapo, both of whom served on the Simpson-Bowles panel, along with two senators from Georgia, Saxby Chambliss and Johnny Isakson — are open to arguments about hefty military cuts. And GOP Senator Jeff Sessions, an ultraconservative who serves on the Budget Committee, cited what he calls the debt "crisis" to suggest that it's time to hack away at Pentagon outlays. "I'm saying the message is clear that we need to do some things now, and the Defense Department can't be absolved from those challenges," he said in early March. On the outside, a passel of conservative activists, including Grover Norquist of Americans for Tax Reform and David Keene of the American Conservative Union, co-wrote a letter urging Congress not to exempt the Pentagon when looking to save money [see Dreyfuss, "GOP Fires at the Pentagon," Feb. 14].

Despite their bravado, Kristol et al. may realize that, increasingly, defending defense is a hopeless task. The Pentagon budget has grown so apocalyptically that an emerging coalition of deficit hawks, liberals who back an expanded social safety net and stimulus spending for job-creating projects, antiwar activists and traditional conservatives who resent the neoconservative uber-hawks ought to be able to force reductions.

According to figures Wheeler compiled for The Pentagon Labyrinth, the military's base budget of $549 billion in 2011 is just the starting point for calculating military dollars. Adding in war spending ($159 billion), homeland defense ($44 billion), Veterans Affairs ($122 billion), interest on defense-related debt ($48 billion) and other items pushes the total to more thanâ€¨$1 trillion a year. In constant dollars, adjusted for inflation, the regular military budget, not including the add-ons, has doubled from a low of about $360 billion in 1998 to more than $739 billion in 2011. It's so much money that, as the Bipartisan Policy report points out, by 2009 US spending on military research and development alone, about $80 billion, surpassed China's entire military budget by more than $10 billion. The budget for the US Special Forces alone is greater than the total military spending of nearly 100 countries; overall, the United States spends about as much on defense as the rest of the world combined.

Proposals to cut the military always start with personnel. Although many assume that the Pentagon spends most of its money on wars and war matériel, from jet fighters to aircraft carriers, the biggest chunk of the budget is for administration, overhead, salaries and benefits, which make up about 42 percent. So bringing down costs can't be done without massive cuts in the number of troops. The Bipartisan Policy Center calls for a reduction of 275,000, including 92,000 in the Army and Marines added during the buildup, 80,000 from deployments in Europe and Asia and 100,000 more from noncombat, infrastructure jobs held by uniformed personnel at the Pentagon.

According to estimates from the Frank/Paul task force, over the next decade the United States could save $347 billion by reducing its military presence in Europe and Asia by one-third ($80 billion), rolling back the amount of ground forces ($147 billion), reforming the military pay structure, reforming Tricare (the generous healthcare program for military retirees) and reducing money for recruiting ($120 billion). Another $217 billion could be saved between 2011 and 2020 by reducing the Navy fleet from 286 ships to 230 ($127 billion), retiring two aircraft carriers and two naval air wings ($50 billion), reducing procurement of the F-35 Joint Strike Fighter and retiring two Air Force tactical fighter wings ($40 billion). Another $22 billion could be saved by canceling or delaying purchases of the MV-22 Osprey tilt-rotor aircraft and the KC-X aerial refueling tanker.

Broadly speaking, public opinion no longer favors military spending. Support for the war in Afghanistan, which absorbs $10 billion a month, has dropped off a cliff, with two-thirds of Americans saying the war is no longer worth fighting. Other polling shows that when asked to choose between cuts in Pentagon spending and undermining the social safety net, the public chooses cutting the Pentagon. A March poll revealed that 51 percent favor reductions in military spending versus just 28 percent who would cut Medicare and Medicaid and 18 percent who'd cut Social Security. And those numbers ignore the fact that for the most part, as Wheeler argues, the public is blissfully unaware of how enormous the Pentagon budget is. He cites other polling to show that the carefully tended myth, fed by hawks, of an underfunded Pentagon has confused many voters. "Fifty-eight percent of Americans know that Pentagon spending is larger than any other nation, but almost none know it is up to seven times that of China," Wheeler wrote recently. "Most had no idea the defense budget is larger than federal spending for education, Medicare or interest on the debt."

Read the rest of Robert Dreyfuss's article at The Nation.