Accessibility links
Foreign Policy: Teaming Up With Enemies In Libya According to records discovered a few years ago, it appears that Libya contributed hundreds of foreign fighters to Iraq's al-Qaida-led insurgency. Joseph Felter and Brian Fishman of Foreign Policy wonder if Washington should be worried that it now could be backing these fighters — now possibly anti-government rebels — against Gadhafi. 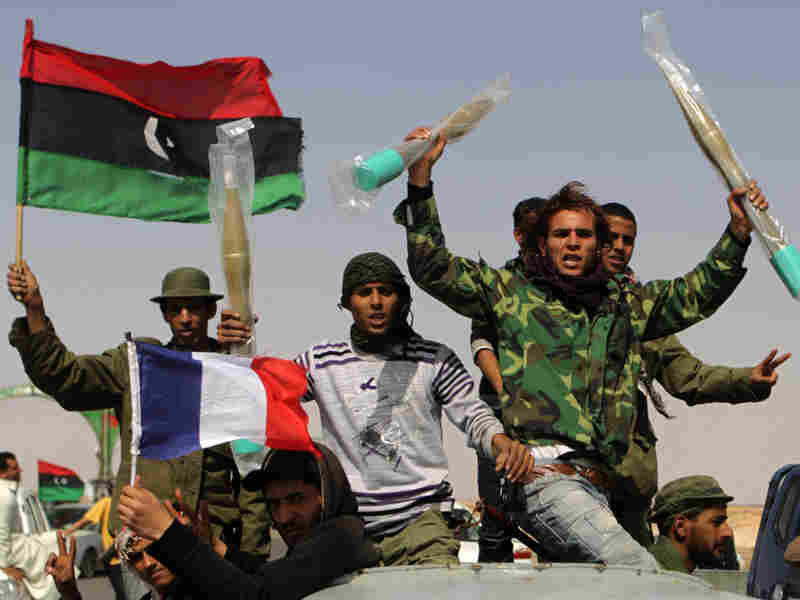 Libyan rebels wave French and rebellion flags as they raise grenades they took from abandoned ammunition stocks of pro-Gadhafi forces. There have been reports that indicate the presence of al-Qaida supporters among the anti-Gadhafi rebels. Patrick Baz /AFP/Getty Images hide caption 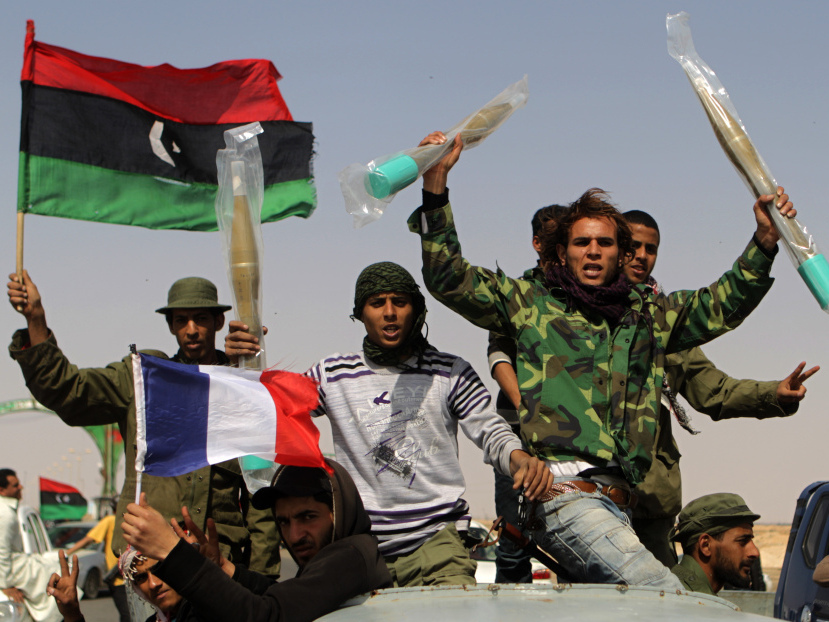 Libyan rebels wave French and rebellion flags as they raise grenades they took from abandoned ammunition stocks of pro-Gadhafi forces. There have been reports that indicate the presence of al-Qaida supporters among the anti-Gadhafi rebels.

Joseph Felter is a U.S. Army colonel and a research fellow at Stanford University's Hoover Institution.

Brian Fishman is a counterterrorism research fellow at the New America Foundation and a fellow at the Combating Terrorism Center at the U.S. Military Academy at West Point.

In September 2007, U.S. soldiers raided a desert encampment outside the town of Sinjar in northwest Iraq, looking for insurgents. Amid the tents, they made a remarkable discovery: a trove of personnel files — more than 700 in all — detailing the origins of the foreign fighters al-Qaida in Iraq (AQI) had brought into the country to fight against coalition forces.

The Sinjar records — which we analyzed extensively in a series of reports for the U.S. Military Academy at West Point's Combating Terrorism Center — revealed that at least 111 Libyans entered Iraq between August 2006 and August 2007. That was about 18 percent of AQI's incoming fighters during that period, a contribution second only to Saudi Arabia's (41 percent) and the highest number of fighters per capita than any other country noted in the records.

Three and a half years later, the Sinjar records have become a subject of renewed interest, for obvious reasons. Forty-four days into the uprising against Col. Moammar Gadhafi in Libya, and 11 days after NATO forces stepped in to enforce a no-fly zone over the country, we still have a fuzzy-at-best idea of who the rebels fighting against Gadhafi actually are; on March 29, U.S. Secretary of State Hillary Clinton admitted that "we're still getting to know those who are leading the Transitional National Council" — the rebels' putative political organization.

Gadhafi, meanwhile, insists his rebel enemies are tied to al-Qaida — and American critics and supporters alike of the international campaign are increasingly concerned that the old dictator may have a point. In a congressional hearing in Washington on March 29, Sen. James Inhofe (R-OK) pointedly questioned James Stavridis, NATO's supreme allied commander for Europe, over "reports about the presence of al-Qaida among the rebels"; Stavridis replied that he believed the rebels were, in the main, "responsible men and women who are struggling against Gadhafi," but that the military had "seen flickers of al-Qaida and Hezbollah."

What should policymakers in Washington and elsewhere make of this ambiguity? First and foremost, they should proceed carefully in considering the presence of jihadi-affiliated social networks in Libya; but it's unwise to exaggerate the threat based on the relatively limited evidence in the Sinjar records. That said, as the international community pressures the Gadhafi regime, it should avoid policies that increase the likelihood that jihadi groups can capitalize on the chaos in Libya.

So what do we know about jihadists in Libya from the Sinjar records? Aside from the overall numbers, we know that the vast majority of Libyan fighters profiled in the documents hailed from northeastern Libya, where today's rebellion is centered. Half of them came from Darnah, a town of 80,000 people on the Mediterranean coast 150 miles east of Benghazi that has played an active role in the rebellion; another quarter were from Benghazi, the heart of the current uprising. The Libyan fighters also seem to have arrived in Iraq over a short period of time, between March and August 2007. That abrupt surge suggests that tribal or religious networks were suddenly spurred to send fighters abroad. And those fighters seem to have been extremely dedicated: Eighty-five percent of the Libyans in the Sinjar records registered as suicide bombers when they arrived in Iraq, a larger percentage than any other nationality other than Morocco.

That is good and bad news. On the one hand, it is disconcerting that social networks sympathetic to al-Qaida were able to mobilize a force of such size and determination in a matter of months; it suggests that they could do the same thing today. On the other hand, the fact that the surge was the work of a small number of distinct networks may indicate that support for al-Qaida is concentrated in particular tribal, religious, or social communities, rather than dispersed throughout a broader swath of Libyan society.

That said, analyzing a complex society primarily through the lens of its most virulent elements is a dicey business. Libyans may have been disproportionately represented among Iraq's Islamist radicals, but that doesn't mean that such radicals are disproportionately represented in the anti-Gadhafi rebellion. Reporting from the front lines of the current conflict indicates that the rebels reflect a complex cross-section of Libyan society. In short, there is little reason to believe that jihadists are poised to seize broad political control of Libya should the rebels come to power — though it is probably true that they will operate more overtly if relieved of Gadhafi's iron-fisted rule.

The more likely scenario than a clean rebel victory, however, is also more dangerous: that either military stalemate or internal divisions among rebel groups will lead to a chaotic civil war in which a small jihadi faction can flourish amid lawless conditions. History shows us that even a small band of determined extremists, if well led, armed, and equipped, can wreak havoc and challenge efforts to bring stability and order to a weakened state. Algeria suffered a decade of terribly brutal civil war at the hands of extremists such as the Armed Islamic Group and its splinter faction the Salafist Group for Preaching and Combat. Other examples include the Abu Sayyaf group in the southern Philippines, Jemaah Islamiyah in Indonesia, and Islamist extremist groups that fuel the insurgency in Chechnya. And al-Qaida in Iraq still kills on a scale that would be deemed completely unacceptable in any country where the recent past was not so tremendously violent.

Where would dangerous jihadi factions in Libya come from exactly? In our original analysis of the Sinjar records, we suggested that the Libyan rebel recruitment pattern might indicate that networks related to the largely defunct Libyan Islamic Fighting Group (LIFG), a jihadi organization primarily dedicated to overthrowing the Gadhafi regime, are still functional — a notion bolstered by recent reports that former LIFG members funneled fighters to Iraq. After all, exiled LIFG members in South Asia joined al-Qaida officially in November 2007, aligning themselves with other senior Libyan jihadists already among al-Qaida's ranks. But other scholars have questioned LIFG's role, suggesting that such recruitment patterns are more likely the result of ad hoc tribal or mosque networks. Those explanations are not mutually exclusive, but it is worth noting that many of LIFG's leaders, imprisoned in Libya by Gadhafi for years, renounced al-Qaida in 2009. Whether these individuals — or those potentially released in the future — will rekindle their old sympathies remains to be seen.

But though the Sinjar documents present more questions than they do answers about Libya's rebels, they do suggest some ideas for how we might best respond to the country's civil war and its aftermath. For one thing, there should be little doubt that the rebellion includes at least some jihadists sympathetic to al-Qaida — but those networks are discrete from the broader rebellion, and they would have existed with or without a no-fly zone. The challenge now is to contain the ability of such troublemakers in the rebel coalition to capitalize on chaos — not with platitudes, but with pragmatism.

With the facts on the ground as ambiguous as they are, this is a tall order. A key challenge now is to identify the jihadi networks inside Libya and measure their strength within the broader rebel coalition. The Sinjar records offer a strong starting point, enabling intelligence agencies to ask good questions about such networks, but they alone do not provide sufficient answers. Undervaluing knowledge of the complexity of tribal and social networks proved disastrous when the United States first entered Iraq. And though an armed intervention of that intensity would be extraordinarily counterproductive in Libya, NATO forces nevertheless ignore the imperative to understand the country's social terrain at their own peril.

In seeking to limit the threat of an Islamist insurgency, the international community can also leverage the most striking feature of its intervention in Libya: the breadth of its diplomatic support. Keeping that coalition intact — particularly the Arab contingent --limits the resonance of al-Qaida's inevitable claim that the West is waging war on Muslims. The initial backing of the Arab League provided critical political space for the United Nations and the coalition implementing the no-fly zone; if the mission shifts toward a more aggressive effort to depose Gadhafi, getting public support from Arab states will be crucial.

A key question for the international community now is whether to arm the rebels. Doing so would offer obvious advantages, but they are outweighed by the risks — most notably the possibility that the weapons could find their way into less-friendly hands in the future. Gadhafi's weapons caches alone pose a long-term threat not just to Libya, but to other states in North Africa, including Tunisia and Egypt. Allied forces should not contribute to the problem.

The air campaign, while unlikely to depose Gadhafi on its own, has bought time for more creative means of rebel support — ones that do not increase the danger of unintended consequences. If improving the rebels' military capacity is necessary, the international community should provide training rather than weapons. Assisting insurgents is a classic form of unconventional warfare, and it does not necessarily mean putting Western personnel in Libya. The United States can help by facilitating rebel communications and delivering virtual instruction on such military basics as digging trenches and coordinating firepower. Training and advisory assistance to rebel leaders can be provided outside Libya's borders (in a neighboring state, ideally) with support from other countries in the region.

The enemies of our enemy in Libya may not be our friends. But the danger that they pose to U.S. interests in the future will be determined in no small part by what the United States and its allies do in Libya today. There is no doubt that the choices facing policymakers are extremely difficult — intervention is often a lose-lose situation. But the international community better get used to that ambiguity sooner rather than later — in Yemen, Bahrain, and Syria, the choices will not get any easier.