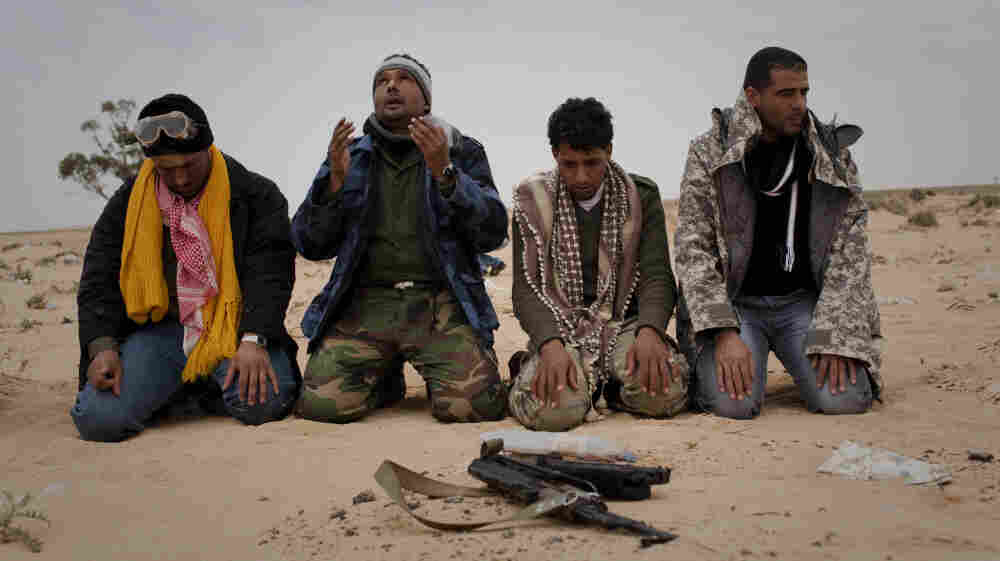 Libyan rebels pray in the desert on the front lines near the town of Sultan, south of Benghazi. Anja Niedringhaus/AP hide caption

The CIA has sent a small, covert team into rebel-held eastern Libya while the White House debates whether to arm the opposition, NPR has confirmed.

The operatives are in Libya to gather intelligence to help direct NATO airstrikes and to help train inexperienced rebel fighters.

"The CIA team is there to train them how to shoot, how to fight, how to have military discipline," NPR's Deborah Amos reported from Cairo. "They are joining a team of former Libyan military officers who are now training about 30,000 young Libyans in the rebel stronghold to also improve discipline, improve communications and make it into a more coherent fighting force." 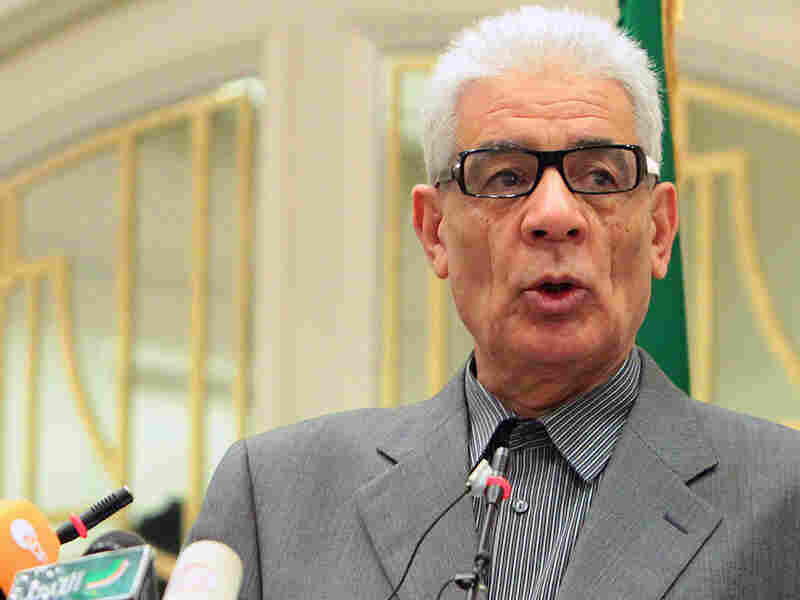 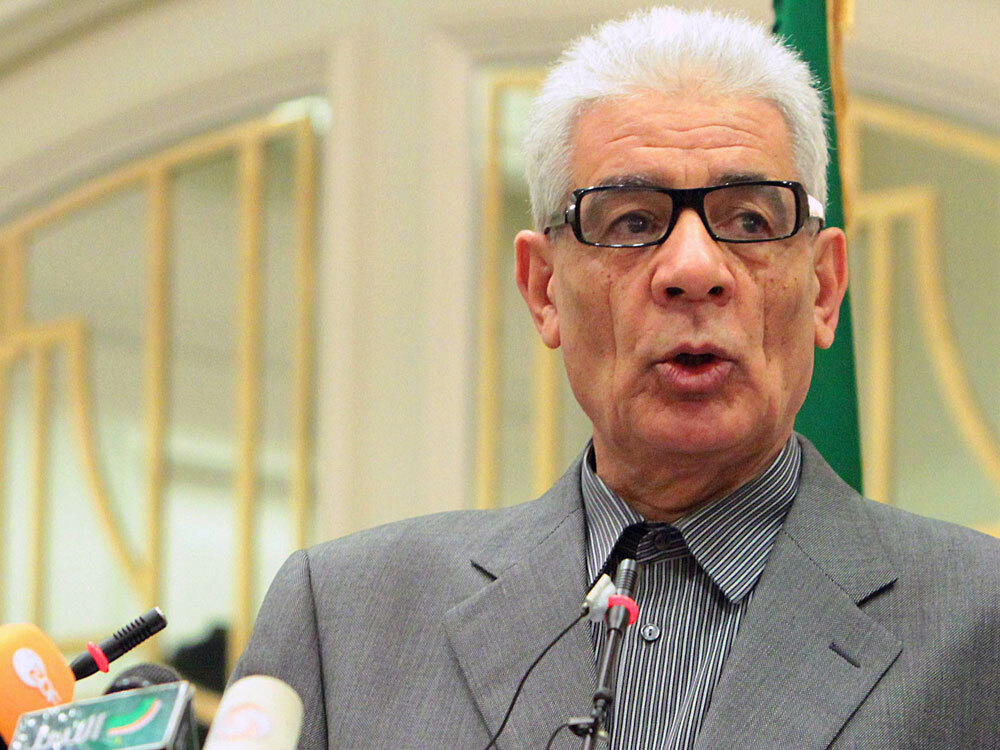 The team's deployment was authorized after President Obama signed what's called a "finding," a legal step necessary before the CIA can carry out secret operations, NPR's Tom Bowman reported. The move puts the U.S. squarely on the side of the rebels.

"They'll no longer be able to say that the coalition is there only to protect civilians," Bowman said.

The White House has made no comment on the CIA teams, but President Obama said Wednesday on NBC that he was not ruling out arming the rebels. Britain's prime minister and France's foreign minister have also suggested that direct military assistance to the rebels was under consideration.

U.S. Defense Secretary Robert Gates told Congress on Thursday that the international, NATO-led operation against Libya remains limited and that Moammar Gadhafi likely will be removed over time through political and economic means and by his own people.

There will be no American ground troops in Libya "as long as I am in this job," Gates said as he testified alongside Joint Chiefs Chairman Adm. Mike Mullen before the House and Senate Armed Services Committees.

Battlefield setbacks have hardened the U.S. view that the poorly equipped rebels are likely incapable of prevailing against Gadhafi's forces without decisive Western intervention, a senior American intelligence official told The Associated Press.

In another blow to Libya's government, Foreign Minister Moussa Koussa — one of Gadhafi's closest allies — defected to Britain on Wednesday. U.K. officials said he is talking and will not be immune from prosecution.

Are U.S. Rhetoric, Action In Libya In Line?

Koussa arrived in southern England aboard a private jet, the U.K.'s Foreign Office said. British officials said he has been talking voluntarily and that they hope to glean information on Gadhafi's state of mind.

A British government spokesman said Koussa had been communicating with the officials in London since the beginning of the U.N.-mandated military operation against Gadhafi and that the former Libyan spy chief brought at least some members of his family with him.

Hague said Koussa was in a "secure place in the United Kingdom" and will not be offered immunity from prosecution. Libya's opposition has accused Koussa of playing a key role in the assassinations of dissidents in Western capitals and in orchestrating the 1988 Lockerbie bombing and the bombing of another jet over Niger a year later.

Hours later, British Prime Minister David Cameron reiterated that there is no immunity deal with Koussa and that the Lockerbie investigation remains open.

"Police and prosecutors are entirely independent of the government, and they should follow their evidence wherever it leads," Cameron said, adding that British officials "will respond to any request that they make."

Libyan government spokesman Moussa Ibrahim told foreign journalists in Tripoli on Thursday that Koussa had been granted permission to go to Tunisia to get medical treatment for diabetes and high blood pressure.

Koussa was "genuinely tired mentally and physically because of his age. He did not let us know ahead of time about his resignation, but chose to do it in this way," Ibrahim said. But the spokesman added that Libya's government "does not depend on one person" and that "there are loads of people who are always ready to take over the post."

If he wants to return, "we will welcome him with open arms," Ibrahim said.

Before assuming the post of foreign minister, Koussa served for more than a decade as Libya's foreign intelligence chief and is seen as one of Gadhafi's inner cadre. Koussa is not the first high-ranking member of the regime to quit — the justice and interior ministers resigned early in the conflict and joined the rebellion based in the east.

"Gadhafi must be thinking to himself, 'Who will be the next to walk away?' " Hague said.

Abdel Moneim Al-Houni, who stepped down as Libya's Arab League representative in the opening days of the uprising in February, said Koussa's betrayal of Gadhafi is a sign that the end of the regime is near.

"Moussa Koussa is one of the pillars of this regime," Houni told NPR. "He has been with [Gadhafi] ... for 40 years. He was head of the international revolution committee. He was responsible for the assassination of many Libyan opposition figures outside."

Later Thursday, Ali Abdel-Salam al-Treki, a former foreign minister who had been named to represent Libya at the United Nations, said in a statement that he has decided to resign. The U.N. position was left vacant after Abdel Rahman Shalgam renounced the Gadhafi regime and resigned in February.

Adding to pressure on Gadhafi's regime, the U.S., Britain and France have made clear that they are open to the possibility of supplying weapons to the rebels, though no decisions have been made.

White House press secretary Jay Carney said Wednesday that no decision has been made yet: "We're not ruling it out or ruling it in."

But NATO's chief said Thursday that the alliance doesn't support U.S. and British suggestions that the U.N. mandate for the international military operation in Libya allows for the arming of rebels Gadhafi's troops.

NATO assumed command of all air operations over Libya early Thursday, taking over from the U.S., which had been eager to be rid of that responsibility. NATO Chief Anders Fogh Rasmussen told reporters in Stockholm that NATO's position is that "we are there to protect the Libyan people, not to arm the people."

Britain and the U.S. believe that existing U.N. Security Council resolutions on Libya could allow for foreign governments to arm the rebels, despite an arms embargo being in place.

The NATO secretary-general said he has "taken note of the ongoing discussions in a number of countries but as far as NATO is concerned ... we will focus on the enforcement of the arms embargo."

Fogh Rasmussen said the transition to its command was completed at 2 a.m. EDT Thursday, giving NATO sole responsibility for all aerial and naval operations in the region. A rebellion against Gadhafi's 42-year rule erupted last month, and international forces including the U.S., France and Britain stepped in March 19, just as it appeared Gadhafi was on the verge of crushing the revolt.

The NATO operation — code-named Unified Protector — includes enforcement of the U.N. Security Council resolution mandating an arms embargo on Libya, enforcement of a no-fly zone and the protection of civilians from Gadhafi's troops.

Despite the setbacks and ongoing NATO airstrikes on government forces, Gadhafi loyalists have been logging successes on the battlefield and reversing a rebel advance westward toward the regime's stronghold in the capital, Tripoli.

On Thursday, the rebels came under heavy shelling by Gadhafi's forces in the strategic oil town of Brega on the coastal road that leads to Tripoli. Black smoke billowed in the air over Brega as mortars exploded.

"Gadhafi's forces advanced to about 30 kilometers [18 miles] east of Brega," said rebel fighter Fathi Muktar, 41. Overnight, he said, the rebels had temporarily pushed them back, but by morning they were at the gates of Brega. "There were loads of wounded at the front lines this morning," he said of rebel casualties.

A hundred miles to the south, the city of Ajdabiya, was "largely deserted" Thursday as most of the civilians — who had just returned after the rebels recaptured it less than a week ago — fled the fighting, NPR's Eric Westervelt reported from the rebel stronghold of Benghazi.

He said doctors at the hospital in Ajdabiya said they have now evacuated their patients to Benghazi.

"Despite continued support from Western airstrikes, the makeshift rebel force has been unable to sustain any forward movement and hold on to captured ground," Westervelt said.

With reporting from NPR's Tom Bowman in Washington, D.C.; Deborah Amos in Cairo; Philip Reeves and Larry Miller in London; and Eric Westervelt in Benghazi. Material from The Associated Press was used in this story.