Accessibility links
On Japan's Coast, A Search For Relatives And Relief Nearly three weeks after the tsunami, the search continues for the thousands still missing. Work crews cannot begin to remove the mountains of debris strewn along hundreds of miles of coastline until they find all the bodies buried underneath. 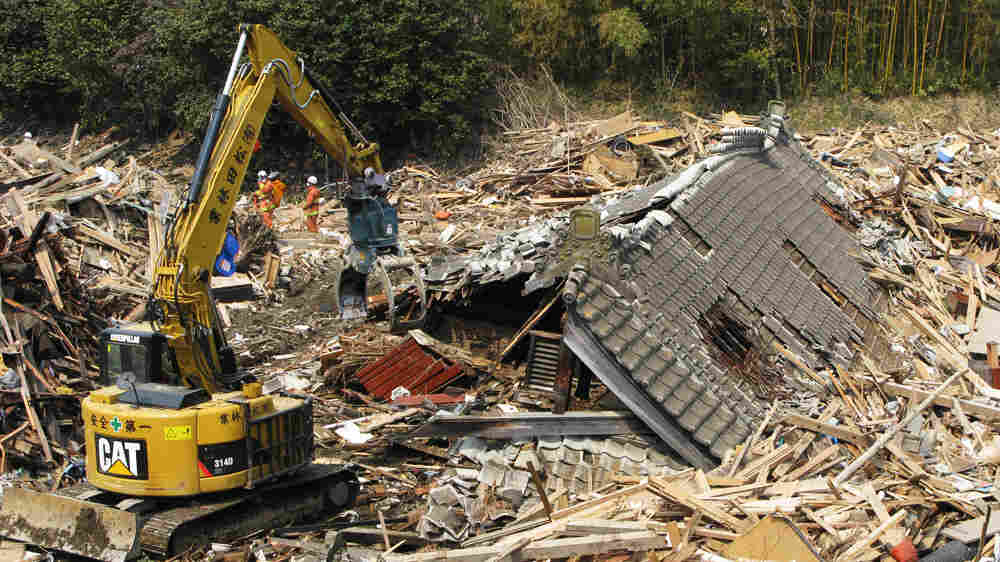 Firefighters use heavy equipment to tear apart a collapsed 300-year-old house while searching for the dead in the rubble of Rikuzentakata, Japan. John Burnett/NPR hide caption

On Wednesday, at 9:15 in the morning, Noriaki Osaka finally found the bodies of his mother and sister, interred in the ruins of their house beside the highway in Rikuzentakata, Japan.

Kiyoshi Osaka would have been 101 years old next month. She enjoyed haiku and sewing. They found her body, as her son predicted, close to her favorite recliner.

The body of his sister, Junko, was found close by — because she would have tried to save her wheelchair-bound mother as the great wave swept inland and engulfed their two-story brick home.

"It is very good. There was so much debris, I've been looking for them for two weeks," her relieved son said. "Today all the neighbors gave us a hand, and we found them. So I am happy." 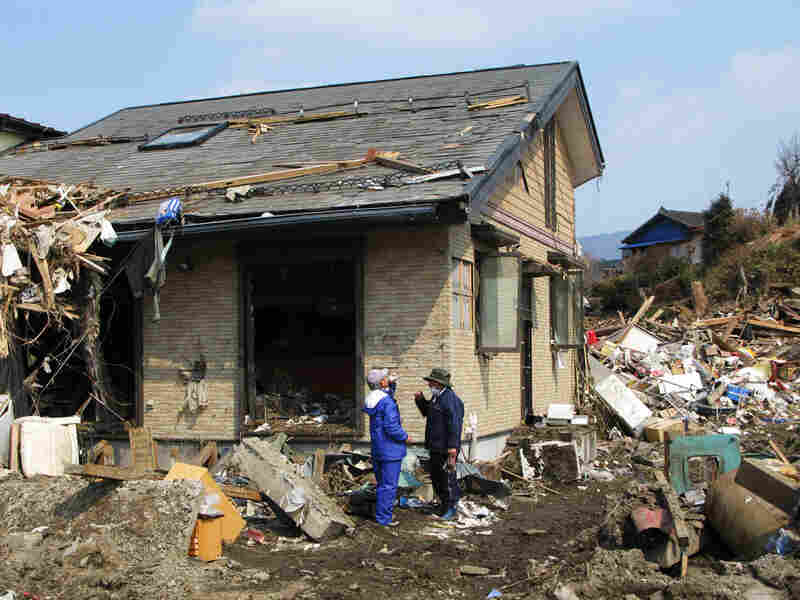 Noriaki Osaka (right) and his brother, Toshiaki, stand by the home where they found and removed the bodies of their sister and 100-year-old mother in Rikuzentakata. John Burnett/NPR hide caption 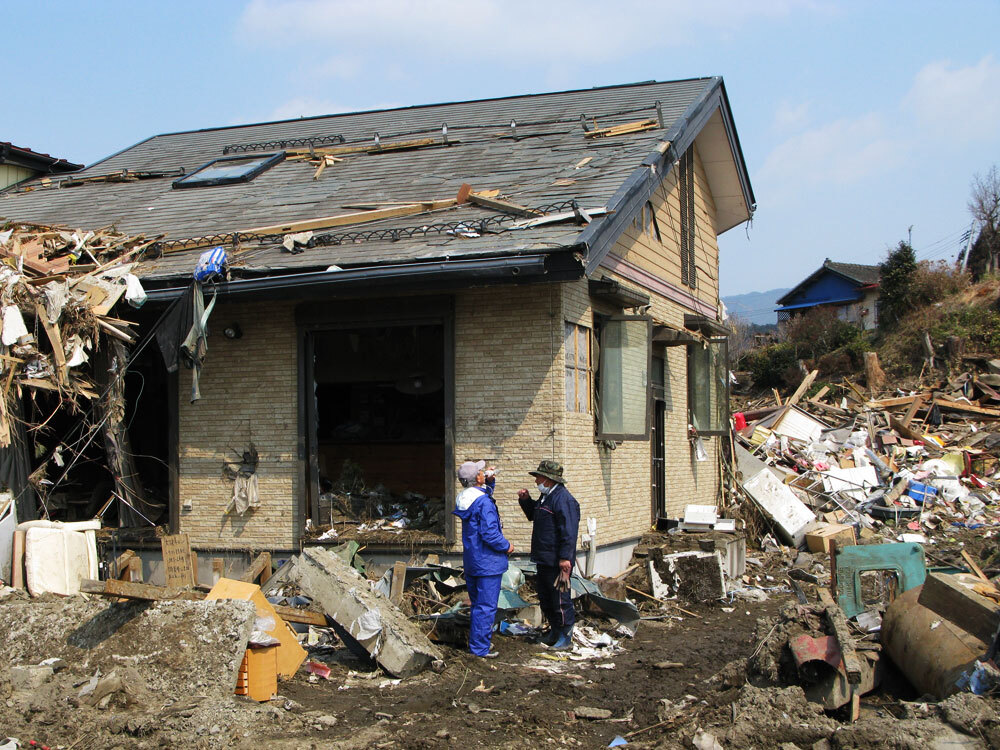 Noriaki Osaka (right) and his brother, Toshiaki, stand by the home where they found and removed the bodies of their sister and 100-year-old mother in Rikuzentakata.

At least 1 in 10 of the town's residents is dead or still missing. The overall death toll from the Japanese tsunami stands at more than 11,000, with at least 16,000 missing. Work crews cannot begin to remove the mountains of debris strewn along hundreds of miles of coastline until they find all the bodies buried underneath.

In a solemn ritual repeated every day in these ruined coastal cities, relief workers carry the bodies of the mother and daughter — shrouded in muddy blankets — into a white ambulance. It speeds them to the nearest makeshift morgue for identification.

Kiyoshi and Junko Osaka become victims No. 650 and 651 to be brought to the gymnasium of Yahagi Junior High School. It's one of four body collection centers in Rikuzentakata.

Behind a squeaky sliding door, two policemen sit at tables with tabulations of the dead. The wrapped bodies are laid out on the wooden floor behind them, hidden from view by a blue tarp. Someone has lit incense to cover up any smell; an unseasonably cold early spring has also helped to slow decomposition.

Relatives go in and come out. Takuko Konno, a 66-year-old housewife, emerges.

"I just confirmed the bodies of my nephew and his wife. My sister is also missing. My daughter, who was in the gymnasium by the seashore, is still missing. I'm trying very hard to find her," Konno says, her tears running down onto her white face mask.

Konno has gone from place to place looking for her daughter's body. She will continue checking.

The Japan Self-Defense Force coast guard is using helicopters to search the sea for bodies.

The ground Self-Defense Force has been put in charge of collecting the dead onshore. But in practice, the task is so huge that everyone is pitching in — neighbors, police, and volunteer and professional firemen. They generally rely on heavy equipment.

Three construction cranes with big jaws remove debris as 20 to 30 workers in bright orange coveralls, masks and helmets stand on the side, waiting until they're needed to remove a body.

Standing at a table with binoculars and a two-way radio, like a general surveying the battlefield, is Shinpei Kurihara. He is fire chief of a prefecture near Tokyo that has been assigned to Rikuzentakata.

"We insist we're still doing rescue, because lots of peoples' loved ones are missing, and if there is a one in a million chance, we want to rescue someone alive," he says. "If the person is ultimately found dead, we will treat the body with respect as much as possible."

The steel claw tears into the carved stonework on the roof of a lovely historic house that was torn off its foundation by the tsunami. The owner, Hidehiko Iwasaki, watches sadly from the highway as the crane finishes off his home, where generations of his relatives have lived since the Shogun period.

But all he has lost is the family home — not the family. He says everyone managed to scramble to higher ground. But the searchers are under orders to look inside every house for bodies.

Only then can the trucks come and begin to haul away the remains of Rikuzentakata.