Accessibility links
Tea Party Gains Wide Support Among Conservatives As Democrats accuse Republican congressional leaders of being co-opted by the Tea Party in the federal budget negotiations, a new survey shows that half of all conservative voters ardently support the movement. 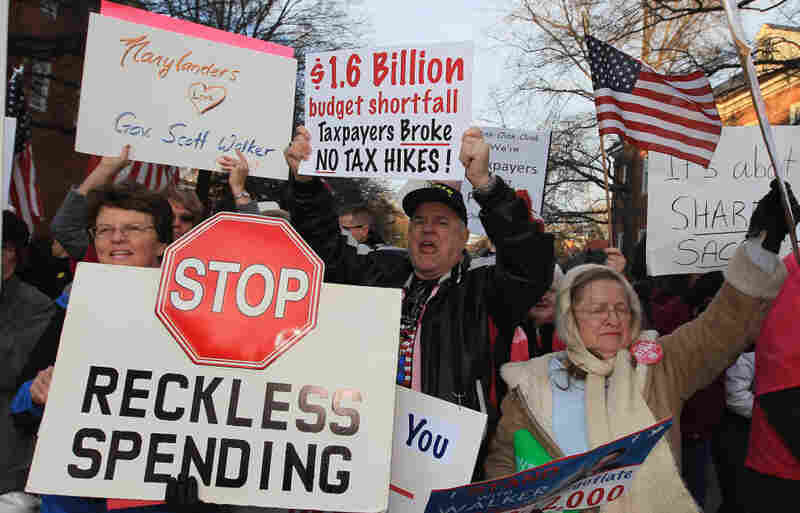 Tea Party supporters hold signs across from a rally held by the American Federation of State, County and Municipal Employees in front of the Maryland State Capitol building in Annapolis on March 14. Mark Wilson/Getty Images hide caption 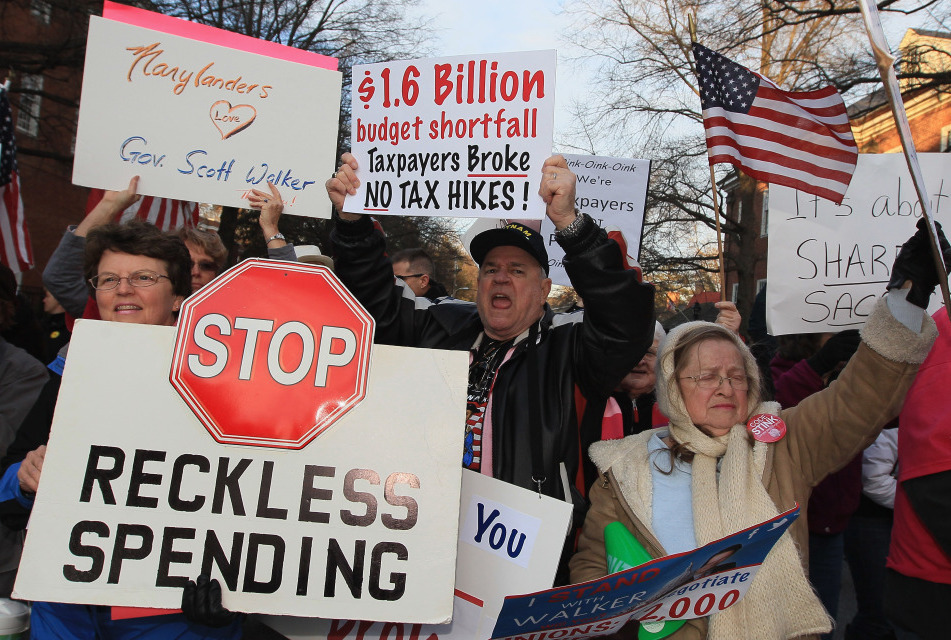 Tea Party supporters hold signs across from a rally held by the American Federation of State, County and Municipal Employees in front of the Maryland State Capitol building in Annapolis on March 14.

As Democrats accuse Republican congressional leaders of being co-opted by the Tea Party in the federal budget negotiations, a new survey shows that half of all conservative voters ardently support the movement.

The University of Washington poll suggests that the popularity of the Tea Party movement is wider than many political strategists have estimated. And it bolsters perceptions of Democrats and others that Tea Party supporters are as conservative about social and policy issues as they are about the Tea Party's fiscal principles.

Compared with respondents who identified themselves as traditional conservatives who don't support the movement, Tea Party backers were far more likely to oppose President Obama's policies and question his personal background and object to such issues as birthright citizenship and the repeal of the "don't ask, don't tell" policy on gays in the military.

A Divide Over Obama

Conservatives And The Tea Party

The Institute for the Study of Ethnicity, Race & Sexuality conducted its Multi-State Survey of Race and Politics Jan. 24-March 12. The survey drew samples from 12 states, including five in which a U.S. candidate in 2010 was elected, or was a strong challenger, after receiving the support of one of six major Tea Party organizations. Conductors of the survey identified Tea Party supporters as respondents who said they "strongly approve" of the movement, excluding those who said they "somewhat approve," according to the survey’s principal investigator, professor Christopher Parker.

The majority, or 55 percent, of all conservative respondents said they believe Obama's policies to be socialist, reiterating an accusation widely tossed about by conservatives. But 75 percent of Tea Party conservatives said his policies are socialist.

Among non-Tea Party conservatives, 53 percent said they hope Obama's policies succeed; 32 percent hope for failure and 15 percent expressed no preference. Sentiments among Tea Party backers were far more hostile: 76 percent of them want Obama's policies to fail; 18 percent want them to succeed, and only 6 percent declined to say.

2011 Multi-State Survey Of Race And Politics

In addition, the two groups were largely split on questions about Obama's background. A plurality of all non-Tea Party conservatives said they believe the president is a practicing Christian and not a Muslim, was born in the U.S. and has a birth certificate.

Forty percent of Tea Party conservatives believe Obama was born in the U.S., while 32 percent don't believe it, and 28 percent said they don't know.

"The biggest thing that emerges, to me, is this rift among conservatives that they are going to have to confront," said University of Washington professor Christopher Parker, who oversaw the survey for the school's Institute for the Study of Ethnicity, Race and Sexuality. "We suspected people in the Tea Party are going to be more pro-birther, etc., about Obama. But the gap when it comes to wanting to see his policies fail is huge. If you call yourself a patriot and you want to see the president fail, even if you don't like him, how patriotic is that? It's really paradoxical."

The results are part of a wider ongoing survey of more than 1,500 people across 12 states aimed at capturing the relationship between politics and race and how they influence voter participation, attitudes about patriotism, civil liberties and other topics.

Another goal was assessing the Tea Party movement and its impact. The survey, in its second year, was expanded to 12 states in 2011 to include five states in which a U.S. candidate in 2010 was elected, or was a strong challenger, partly owing to the support of Tea Party organizations.

A number of polls in the past year have sought to identify the characteristics of Tea Party supporters, particularly after the movement fueled the Republican takeover of the House this year and GOP governor victories in 2010.

Tea Party leaders have tried to push back against accusations from Democrats that their movement is expanding beyond fiscal conservatism to advocate for conservative social policies.

"We don't address those issues as an organization," said Mark Meckler, co-founder and national coordinator of the Tea Party Patriots, one of the largest such groups. "People who go to church have political perspectives, right? But churches don't deal with that. Folks come in and they are attached to other things. Because we don't deal with those issues, I couldn't comment on them."

Meckler disagreed with Parker's assessment that his survey reveals a schism among conservatives.

"There may be different perspectives, but I'm not hearing any divisions when I attend conservative groups' meetings all over the country. In fact, people are talking about how the conservative movement seems to be on the same page more than any other time in history. I think the left hopes for that schism, but I don't think their hopes will be fulfilled."

Polls have consistently shown that the movement continues to draw supporters who also hold right-wing views on social issues, from abortion to gun rights.

"Thinking of the Tea Party as a formal organization with members is maybe thinking too narrowly," says veteran pollster Mark Blumenthal, founder of Pollster.com. "It's always struck me as maybe a brand ID, a set of ideas. It's a way of people to label their affinity with a set of arguments they are making, which have in common an extreme negative reaction to Obama and to Democrats."

The Role Of Race

Among all respondents in the University of Washington survey, race appeared to influence what they disclosed about their opinions of Obama.

Parker said survey researchers call it the "social desirability" effect, in which respondents refrain from expressing opinions that might offend the listener or cause controversy. In the University of Washington survey, Parker said respondents may have withheld critical opinions of Obama because they assumed that the minority interviewers might be Obama supporters.

The University of Washington survey comes as Tea Party activists turn up the pressure on congressional Republicans to fulfill their 2010 election pledge to cut $100 billion in federal spending in the current fiscal year. Tea Party members attended a rally in Washington on Thursday in response to ongoing budget negotiations, which appear likely to yield much smaller spending cuts.

Throughout the budget talks, Senate Democrats have pursued a strategy aimed at denouncing cuts sought by Republicans as far beyond the wishes of mainstream Americans. They have portrayed congressional Republican leaders as hostages of the Tea Party and its extremist views.

On Thursday, House Speaker John Boehner (R-OH) said budget negotiators from both parties may be close to an agreement. Lawmakers are discussing a compromise that could be in the $33 billion range.

"That's unacceptable," Meckler says. "We're asking for $100 billion in total cuts. That's less than 2.6 cents per dollar of federal spending. But this is no surprise to us. Right now, [congressional Republicans] are not very popular in the movement anyway because they haven't held the line. But we will hold them accountable."

Views Inside, Outside The Mainstream

Is the Tea Party extreme? It depends.

Many so-called mainstream conservatives, from Karl Rove to columnist George Will, have derided the Tea Party's tactics as extreme or too naive for Washington.

Multiple polls, including the University of Washington results, suggest that the Tea Party movement falls both outside and inside the mainstream, depending on the topic.

For instance, on deficit reduction, the movement shows far more willingness than most other Americans to push for deep spending cuts. To that end, a Wall Street Journal/NBC News poll released this month found that more than 7 in every 10 Tea Party supporters feared that Republican lawmakers wouldn't cut enough spending.

At the same time, the poll showed that even Tea Party backers, by a nearly 2-to-1 margin, believe that achieving that end by making significant cuts to Social Security would be "unacceptable."