Accessibility links
As Gadhafi Holds On, What's Next For NATO? With the Libyan rebels repeatedly getting driven back, it has become apparent to many analysts that airstrikes alone can't help them take on Gadhafi's forces effectively. Some observers are now saying the conflict could drag on for years. 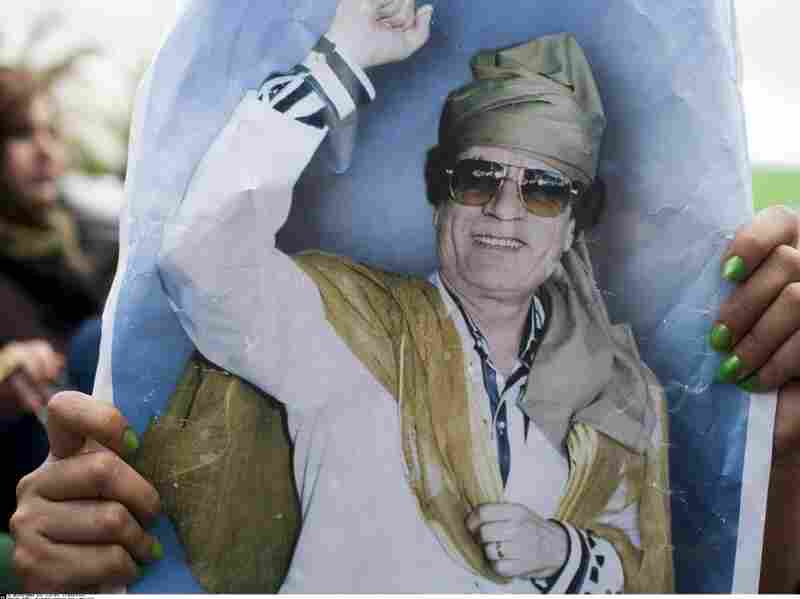 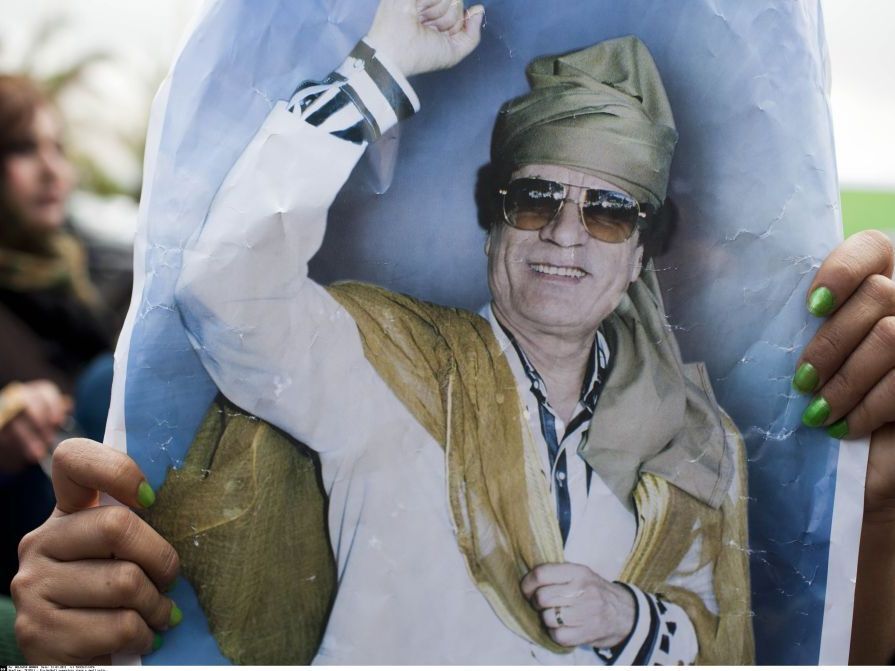 Supporters of Libyan leader Moammar Gadhafi stage a small rally in front the hotel where foreign journalists stay in Tripoli.

It's now been almost two weeks since international airstrikes began in Libya. The NATO bombing campaign continues, but over the past few days Moammar Gadhafi's forces have gained ground in the east and they are in control of most of western Libya.

On Capitol Hill, Adm. Mike Mullen, chairman of the Joint Chiefs of Staff, said Thursday that the airstrikes have had modest success so far.

"We have actually fairly seriously degraded his military capabilities," Mullen said. "We've attrited his overall forces at about the 20 to 25 percent level. That doesn't mean that he's about to break from a military standpoint, because that's just not the case."

With Gadhafi still entrenched, NATO now faces the dilemma of what to do next.

In the wet, green mountains above the Libyan capital, Tripoli, lies the small rural village of Khorum.

On Tuesday morning, a projectile came through an apartment wall and hit an 18-month-old baby, fatally injuring him, family members say.

Journalists from Tripoli were bused two hours to see the damage and interview the parents.

Speaking through translators, they told reporters that the target of the airstrikes had been a weapons dump several miles away. One of the munitions, they say, was ignited and slammed into their building.

Their version of events was impossible to verify — which is crucial here.

The Gadhafi government has been desperate to show evidence of civilian casualties from NATO's bombing campaign. Almost every single government trip recently has been aimed at bolstering Libyan claims of multiple deaths.

In the past five days, though, they have only been able to provide some evidence for five deaths — three in the port of Sirte, Gadhafi's hometown — and those killed were military-aged men, the baby in the village and a woman who was apparently also killed in a secondary explosion after an airstrike in Misdah.

But those carrying out the bombing campaign have been equally insistent in their denials that there have been any civilian casualties at all.

"We've been very careful about this," Defense Secretary Robert Gates said last week. "And it's almost as though some people here [are] taking at face value Gadhafi's claims about the number of civilian casualties, which as far as I'm concerned are just outright lies."

Despite the uncertainty about how many civilians have been killed in bombings, it's almost certain there will be more deaths as the conflict drags on.

In the west, Gadhafi's forces are now in and among the civilian population, bunking down in roadside shops and manning checkpoints on the roads. Heavy weaponry has been dispersed in some cases.

In the east, it's a different problem.

"I think we have noticed that ... it's too little now," he says. "Especially last week, you know, NATO was doing nothing."

As rebels repeatedly get driven back, it has become apparent to many analysts that airstrikes alone can't help them take on Gadhafi's forces effectively.

Michael O'Hanlon of the Brookings Institution says Gadhafi's troops have been adapting to the airstrikes. NATO is now facing "a Libyan army force that's increasingly learning how to deal with our air power," he says.

O'Hanlon and some other analysts are now no longer predicting a fight that will end in a matter of days or a matter of months, but possibly years.

"There's a chance," he says, "that the real endgame is going to be only as [Gadhafi] realizes and his supporters realize that sanctions will not be lifted, and the rebels will, in fact, be able to build up their forces with time, to actually march on Tripoli in 2013, let's say."