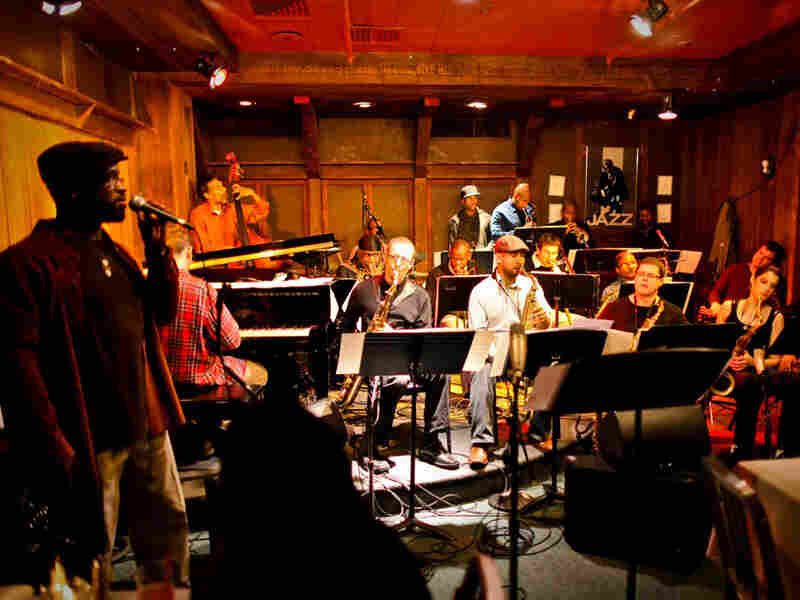 There's a certain type of payoff only a big band, or large jazz ensemble, can provide. It's akin to driving a muscle car that doubles as a paint store: So much momentum and horsepower, so many colors and textures. Driving that car requires an investment, too; you try to marshal 15-20 top-flight musicians, artistically or economically. But plenty are still willing to make a go of it, in search of the oomph and oooh only an extended family of horns can provide.

It makes sense that the pianist Orrin Evans is one of them. He's been on the circuit since the mid-'90s, and leading bands for nearly that long. (He's got a new small group record coming this summer.) He knows both the Philadelphia and New York jazz scenes well, and has often sought to bring them closer. And as a performer, he brings a bold intensity to the piano, seemingly informed by McCoy Tyner's voicings and a heavyweight boxer's roundhouse punches.

The jazz orchestra that Orrin Evans created is called the Captain Black Big Band, though it's almost the Captain Black Big Bands, plural. A lot of musicians — young and old, from either Philadelphia or New York — played on this debut album: 38 in total, over seven tracks. They rotated in and out during this series of live performances from early 2010; Evans even got two other pianists to take turns in his own chair. Indeed, there's a collective spirit to the enterprise, where Evans is more community organizer than meticulous auteur. He wrote but four of seven tunes, only one of which he arranged for big band, while bandmates wrote and arranged the other numbers.

This town hall meeting of a band makes the kind of jazz that nearly everyone could agree to call jazz. There are layers of squirming saxes, bright piano and serious brass blasts — low-end, high-note, and mid-range alike — tied together with a surplus of swing. But it doesn't sound stuck in a misremembered era — there are jutting edges to the writing, and they're played with a fashionably loose vibe. (As analogues, think of contemporary big bands led by trumpeters Roy Hargrove, or Nicholas Payton, or Charles Tolliver, or even the Charles Mingus repertory group, which Evans has served in.) And no soloist is afraid to hold anything back: There's audacity of spirit here.

Here's an example from the album's last song, the brooding, weighty "Jena 6," recorded in front of a New York City audience in April: Jaleel Shaw starts his solo meandering about on alto saxophone; six tumultuous minutes later, he's absolutely screeching an overblown solo cadenza. After all the rough-and-tumble, the unapologetic swing, the energy spent trying to ride such an unruly beast of a band, it hits like a deep tissue massage, aching and cathartic. And when he finally lifts the horn from his mouth, the audience audibly understands.

Captain Black Big Band will stream here in its entirety leading up to its release on March 29. Please leave your thoughts on the album in the comments section below.