Accessibility links
'Carmen': Bizet's One-Opera Hit Parade Georges Bizet is only known for one opera — but he packs more hummable tunes than usual into it. This production features Roberto Alagna as Don Jose. 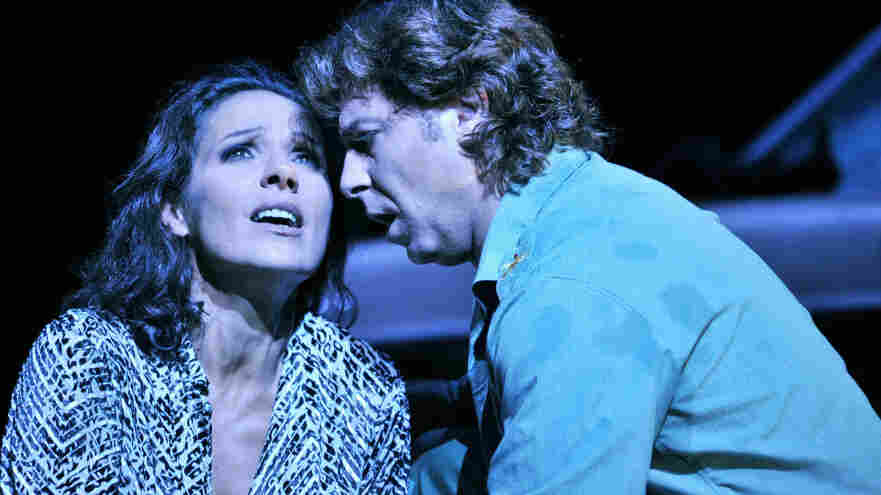 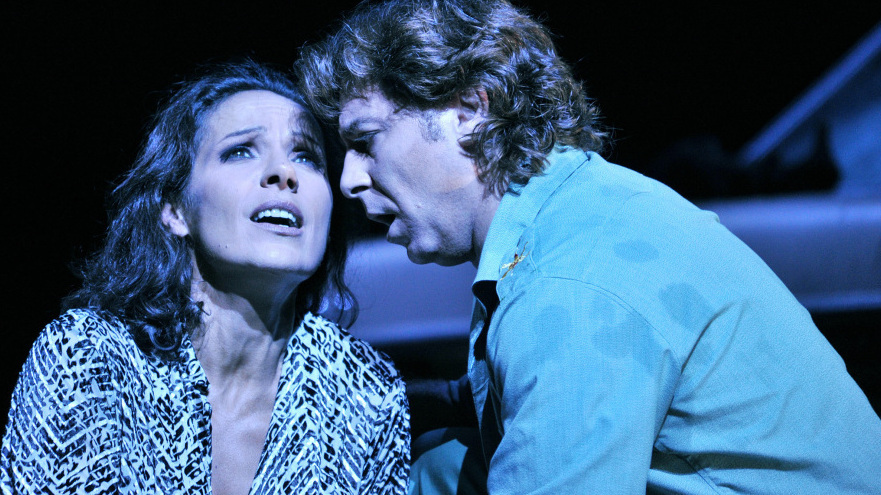 The tortured relationship between Carmen (mezzo-soprano Beatrice Uria-Monzon) and Don Jose (tenor Roberto Alagna) is at the center of one of opera's biggest blockbusters.

The opera's lovestruck male lead, Don José (tenor Roberto Alagna), fares better musically than he does dramatically. In the end, he's both rejected and reviled — but not before Bizet gives him one of the opera's most purely beautiful numbers, the "Flower Song" in Act Two.

In Act One, Don José has orders to arrest Carmen (mezzo-soprano Beatrice Uria-Monzon), but her seductive "Seguedilla" persuades him that escorting her to jail might not be his most rewarding course of action.

Generally, opera isn't tossed into the vast pot of entertainment that's loosely defined as "popular" culture. But if there's one opera that does fit the pop culture bill, surely it's George Bizet's blockbuster, Carmen.

For one thing, Carmen may have a bigger selection of hummable tunes than any other single opera. People who say they've never listened to a note of opera in their lives have probably heard something from Carmen, even if it was only in an elevator. The opera's string of hits includes the rousing toreador march that dominates the opera's introduction, the title character's sultry entrance scene and "Habanera," the playfully spooky "Urchin's Chorus" and the seductive "Seguedille" — all of which are heard before the end of act one!

As for Carmen's plot, it showcases any number of elements that don't exactly mesh with opera's typical, highbrow image, proving that opera goers are attracted by the same sort of guilty pleasures that draw people to sensational TV shows, or lurid movies.

Carmen herself, for example, easily falls into the same, femme fatale tradition that includes cinematic characters ranging from Rita Hayworth's title role in Gilda to the Sharon Stone character in Basic Instinct. Early audiences professed to be scandalized by Carmen's overt sexuality and her violent death, but they went to the opera anyway — in droves.

The opera's devotees also seem to ignore its unflattering and oversimplified portrayal of the Roma people — commonly known as gypsies — just as fans of mafia stories put up with the stereotypes they often reinforce.

The popularity of Carmen was even helped by a real life tragedy, just as movies such as The Dark Knight and The Crow developed a special fascination for some after the deaths of their stars, Heath Ledger and Brandon Lee. At a point when the long-term success of Carmen was still an open question, Bizet suddenly died. His admirers mourned, but lines at the ticket office promptly got longer — and the opera has been a hit ever since.

On World of Opera, host Lisa Simeone presents Bizet's Carmen from one of the foremost theaters in Spain, the Liceu in Barcelona. The production features a top-notch international case, including mezzo-soprano Beatrice Uria-Monzon in the title role, tenor Roberto Alagna as Don José and baritone Erwin Schrott as Escamillo.

The Story Of 'Carmen' 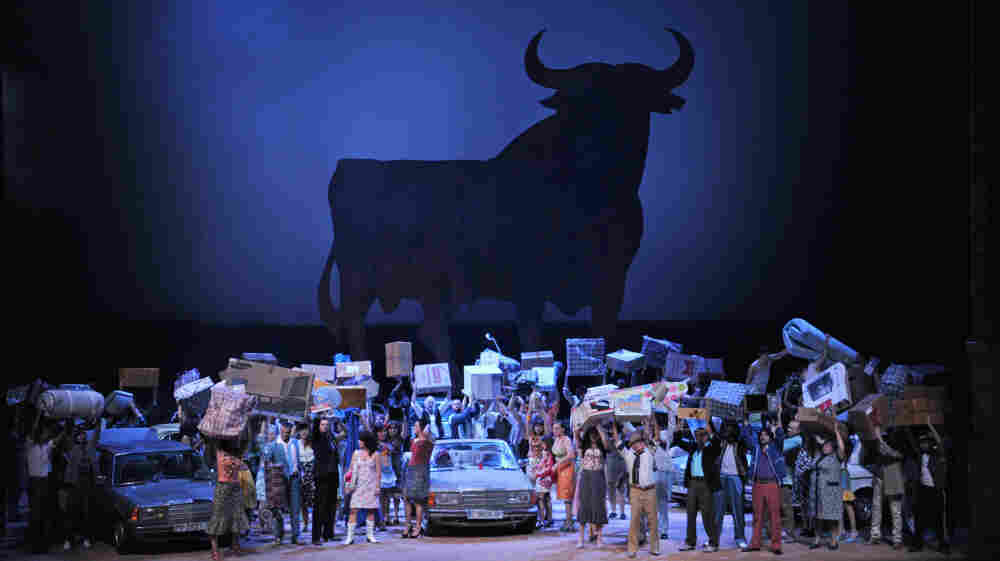 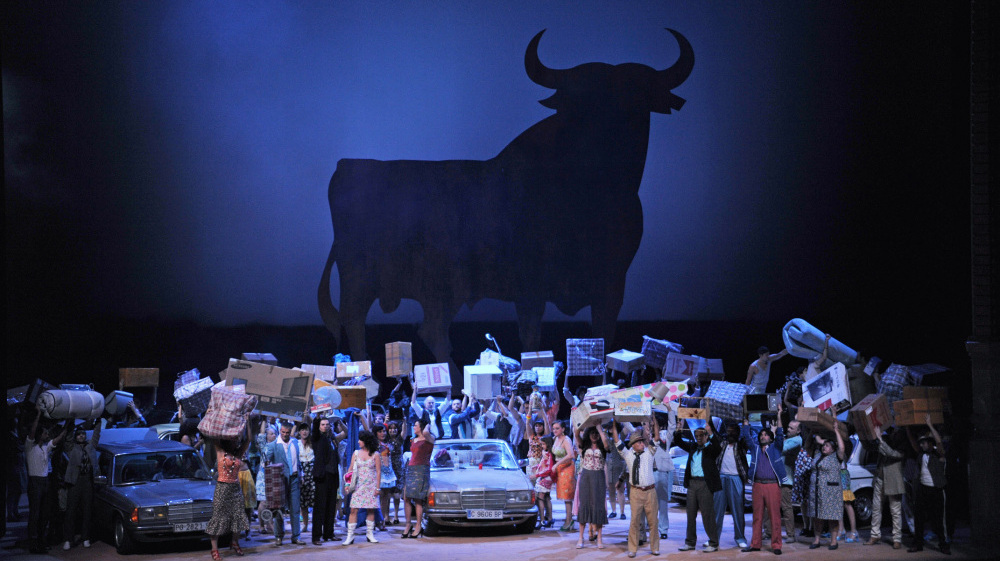 The final act takes place outside the bullfight arena in Seville.

As ACT ONE begins, soldiers have gathered outside a cigarette factory in Seville, waiting for the factory girls to appear. A young woman named Micaela is looking for a soldier named Don José, but he hasn't arrived yet, so she leaves. When José does show up, he's with his superior officer, lieutenant Zuniga.

Soon, women emerge from the factory for their break. One of them is Carmen, who makes a grand entrance with a flower in her teeth, singing her famous "Habanera." She flirts boldly with José, throwing the flower at his feet. When the women go back to work, he picks it up and keeps it.

Micaela returns to look for José. She's a teenaged orphan who has been raised by José's mother, and she has a message for him from home. His mother thinks Micaela would make a good wife for José, and she may be right — he does seem attracted to her.

They're interrupted by a commotion at the factory. Carmen has started a fight with a co-worker, stabbing her in the process. Zuniga orders José to take Carmen into custody. But when the two are left alone, Carmen turns on the charm, and José can't resist. Instead of taking her to jail, he helps her escape.

ACT TWO begins some time later, in a tavern. Carmen is there with two of her friends, Mercedes and Frasquita. They're drinking with some soldiers, including José's lieutenant, Zuniga. Carmen finds out that José has been arrested for letting her go and has spent a month in jail. The soldiers leave, and two other men arrive. They're criminals who want Carmen and her friends to go with them on a smuggling trip. Mercedes and Frasquita agree, but Carmen says she's in love and wants to stay behind.

There's a commotion as the famous bullfighter Escamillo enters. He's immediately taken with Carmen, but she turns him down, thinking of José and saying she already has a man in her life.

José himself arrives, and Carmen celebrates his return. She decides she'll go with the smugglers after all and invites José to come along. He's tempted, but eventually says he can't do it. Carmen gets angry, and even José's beautiful "Flower Song" can't soothe her.

But their standoff is put aside when Zuniga returns. He's also got an eye for Carmen and was hoping to find her alone, so he abruptly orders José to leave. José refuses, and instead attacks him. José gets the best of the struggle. But, having assaulted his superior officer, José knows he can't stick around, so he takes off with Carmen and the smugglers.

In the smuggler's camp, as ACT THREE begins, everyone sings about the dangers of their profession. Some of them read cards to tell their fortunes. For Carmen, the cards signal bad news. They predict that she and Don José will both die.

When the smugglers leave, Don José stays behind on guard. Micaela suddenly appears in the shadows. When a nervous Don José fires a shot into the darkness, she hides.

Then there's another visitor — the bullfighter Escamillo. He says there's a rumor that Carmen is looking for a new lover, and figures he'll apply for the job. José charges at him, and there's a fight. Just as he's about to kill the toreador, Carmen returns and stops him, saving Escamillo's life. As he leaves, Escamillo invites Carmen to his next bullfight.

Micaela finally comes out of hiding and says José's mother wants him to come home. José is determined to stay with Carmen even though she makes it clear that she's getting tired of him. Micaela then admits that José's mother is dying. He leaves with Micaela, threatening Carmen on the way out.

ACT FOUR takes place outside the bullfight arena in Seville. Escamillo arrives in a grand procession — and Carmen is with him. When the toreador goes into the arena to prepare, Carmen stays outside with her friend Frasquita. It seems that José is somewhere in the crowd. Frasquita is afraid José might try to hurt Carmen, but Carmen isn't worried and decides to confront him.

José begs her to leave with him, but she says she no longer loves him; she's with Escamillo now. As she starts to enter the bullring, José tries to stop her. She defies him by taking off his ring, and throwing it at his feet. José draws a knife and stabs Carmen to death.

Just then, a roar comes from the arena and Escamillo emerges in triumph. Don José is standing over Carmen's body, bloody knife in hand. He gives himself up to the police as the opera ends.