Accessibility links
Want Regime Change? Win Over The Military The Egyptian and Tunisian armies were, ultimately, more loyal to their nations as a whole than to preserving the power of any individual. That has not been the case in places like Libya and Bahrain, so far. 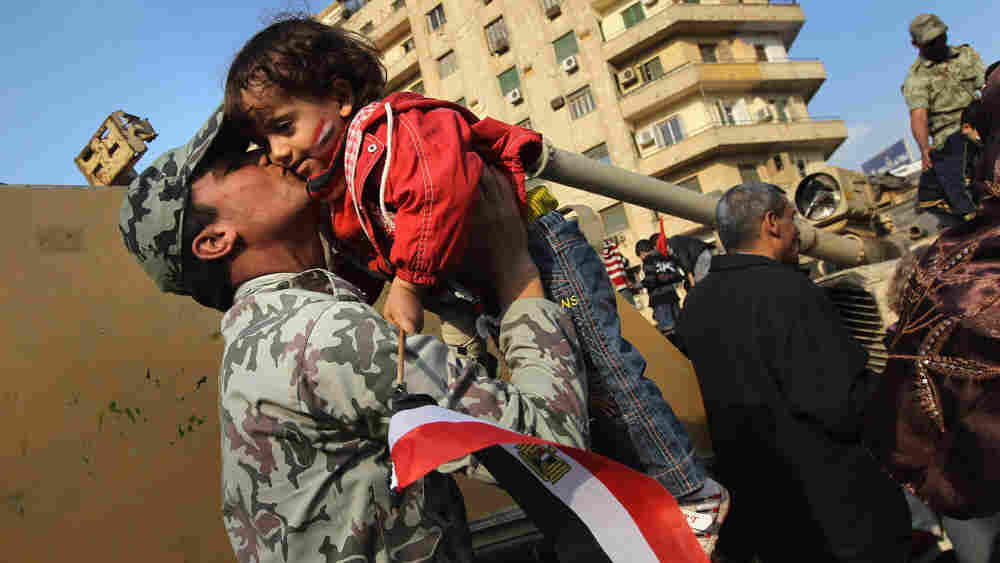 One of the big differences between Arab countries where the ruler has stepped down in the wake of recent protests and those where governments have spent weeks shooting at their own people is the role played by the military.

In both Tunisia and Egypt, the armies made it clear they would not fire on civilians. In time, they turned against their respective presidents and came to see themselves as guardians of the state rather than the particular individuals in power. In both countries, the presidents were ultimately forced out.

"When it's successful, as in Tunisia and Egypt, militaries are at the center, not because they're at the center of the revolution but because they see themselves as a separate institution upholding the national interest," says Jean-Pierre Filiu, a visiting professor of international and public affairs at Columbia University. "As long as the ruler is identified by the military as the best embodiment of the national interest, he is fine. If not, they will topple him."

That kind of dynamic has not played out in countries such as Libya, Bahrain and Yemen. In those countries, the militaries lack the strong professional ethos that prevailed in Tunisia and Egypt and helped prevent the army from shooting at civilians, outside observers say. They also have not come around to the opinion that the time has come to change the regime in charge.

That's a major reason why, despite the continuing unrest in the region, no other leader has been forced from power — yet.

"In no other country do I see the army considering a ruler as a threat to the national interest, which is what triggered Egypt and Tunisia," Filiu says. "In contrast, in other countries, they will back the ruler."

Spirit Of The Corps

Asabiyya is a term in Arabic meaning solidarity or cohesion of a group. In Egypt, the army has a strong sense of asabiyya, while the Libyan army, even before the current chaos, was fractured.

"The Egyptian military always viewed itself as a source of strength and continuity," says Kori Schake, a research fellow at Stanford University's Hoover Institution and professor of international security studies at West Point. "There's a sense of nationality independent of the leadership of the country."

Jean-Pierre Filiu, a visiting professor of international and public affairs at Columbia University

To play a decisive role in ousting the top leader, the military must be central to the workings of government, but not so tied to it that it can't pivot away, says Shashank Joshi, an associate at the Royal United Services Institute, a defense think tank in London.

"A unified army is not enough," he says. "You also need an army that is in the regime, but not of it, that stands apart from the regime in some way."

In some Arab countries, such as Saudi Arabia and Syria, there's not one army but multiple security forces. Their role is not simply to protect the country from outside forces but to protect the ruler himself. And they are kept small and divided so as not to be strong enough to overthrow that ruler, says Nora Bensahel, a senior fellow at the Center for a New American Security.

The Tunisian and Egyptian armies may not have completely clean hands, but they have traditionally played less of an internal security role than some of the neighboring militaries.

"In Egypt, the army sees itself as professional, as guardian of the nation," says Kenneth Pollack, director of the Brookings Institution's Saban Center for Middle East Policy. "Quite frankly, the army looked down on the police in a profound way, as a bunch of amateurs, a bunch of thugs, not worthy of their respect."

The Egyptian army's sense of itself as an independent actor grew, in part, out of a strategic miscalculation on the part of Hosni Mubarak, the country's longtime president who was forced out by a military coup in February. 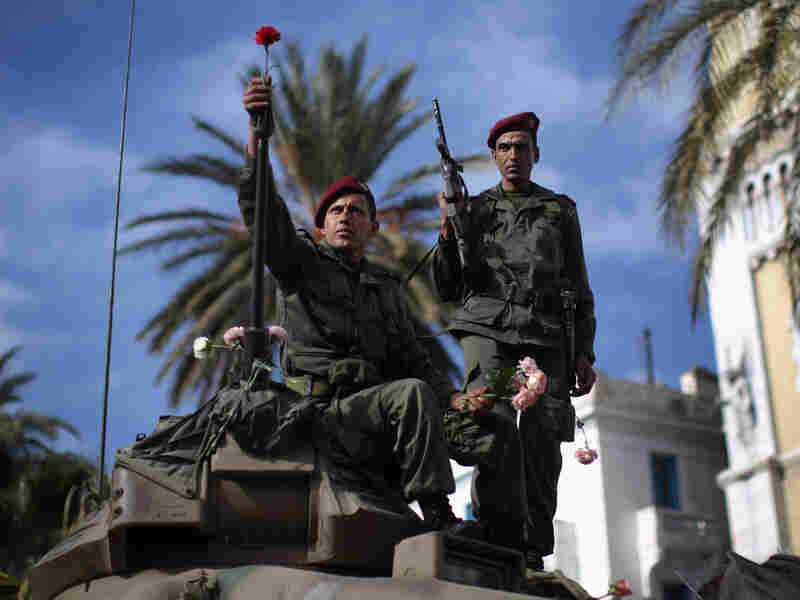 Like all of Egypt's modern leaders, Mubarak began his career in the military. He had spent his 30 years in power making sure the armed forces were controlled by people loyal to him. But he also made the decision along the way not to pay senior officers sufficiently, instead letting them seek their fortunes through control of different industries.

"He understood that the military was hurting economically, and basically his way to deal with that was to say, have your way with the civilian economy," says Pollack. "What we found is that the military had actually developed an independent corporate identity apart from Mubarak."

The military forced Mubarak out the day after his final speech to the nation in part because they saw him as a threat to the country's future prosperity — and thus their own.

"An army that is embedded within society and the economy is not necessarily one that defends the regime," Joshi says. "An army that has its finger in the pie may judge that the only way to salvage its privileges is a managed and calibrated transition from the old regime."

Joshi says it's impossible to predict how an army will react in a revolutionary situation based on its role in the economy. Money alone might not be enough motivation to dump a ruler; Tunisia's army did not have a large independent stake in the economy.

Other Muslim militaries that have launched coups against leaders in recent years have done so for nonfinancial reasons. The Turkish army, for instance, sees itself not only as guardian of the nation but also as guardian of a particular, secularist political system, Pollack says.

It's about not just money, but also attitude. Militaries that have a strong professional ethos are more likely to have the discipline not to start shooting at protesters.

"Mercenaries are much more likely to inflict harm on civilians and fire on their own people," Joshi says.

What's happening in countries such as Bahrain and Libya is, in part, based on militaries, mercenaries and outside forces seeing themselves as more loyal to the regime and its leader than to the idea of the nation as a whole.

A Force In Its Own Right

For the military to play a decisive role in favor of revolutionary change, it has to not only view itself as an institution that stands apart from the person in charge, but also be a powerful enough force in its own right that its loyalties are seen as decisive in determining the course of the nation.

In Libya, "You don't have a unified institution to embody this collective sense of belonging," says Filiu, the Columbia professor.

In defecting to the Yemeni opposition last month, Maj. Gen. Ali Mohsen said: "The military is the property of the people and its protector. It does not work for any specific person."

But Mohsen did not have the stature to ease President Ali Abdullah Saleh from power. In fact, Saleh called for Mohsen's own resignation during his negotiations about stepping down.

"Egypt in some ways seemed almost unique because the stature of its military within its country is so incredible," Joshi says.