Accessibility links
Broadway To Get A View From MLK's 'Mountaintop' In The Mountaintop, playwright Katori Hall imagines an encounter between Martin Luther King Jr. and a hotel chambermaid on the eve of his 1968 assassination. Slated to open on Broadway this fall, the play was inspired by Hall's family history and her Memphis, Tenn., roots. 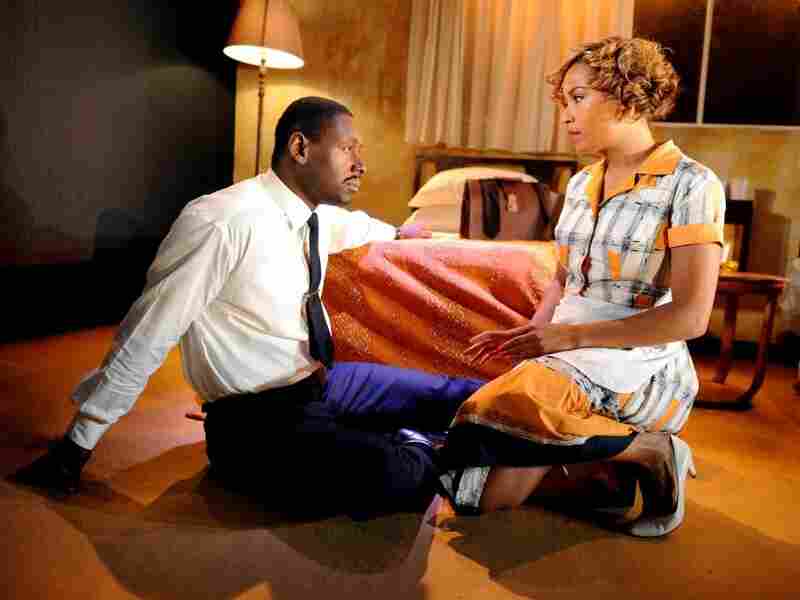 David Harewood and Lorraine Burroughs star in London's West End production of The Mountaintop, which is expected to open with a new cast on Broadway this fall. Tristram Kenton hide caption 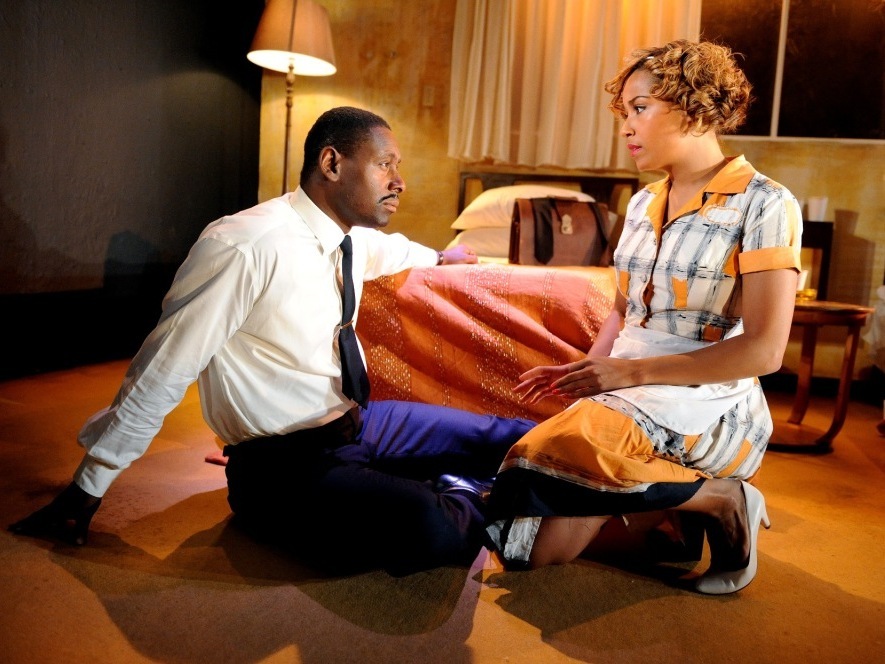 David Harewood and Lorraine Burroughs star in London's West End production of The Mountaintop, which is expected to open with a new cast on Broadway this fall.

Forty-three years ago, on April 3, 1968, Martin Luther King Jr. took the stage at Mason Temple, a black church in Memphis, Tenn., to deliver what was to be his final speech.

His "Mountaintop" speech, which touched on his own mortality and how the civil rights movement would go on without him, proved to be prophetic. The next evening, King was assassinated as he stood on the balcony of his room at the Lorraine Motel in Memphis.

That last night at the Lorraine Motel inspired 29-year-old Katori Hall's The Mountaintop, a play that imagines an encounter between King and a motel chambermaid on the eve of his assassination.

The play ran in London to critical acclaim, winning the 2010 Olivier award for Best New Play — the British equivalent of winning a Tony in the U.S. — and is expected to open on Broadway this fall, starring Halle Berry and Samuel L. Jackson.

Hall tells NPR's Melissa Block that the play takes place at the Lorraine Motel, after King's speech at Mason Temple. King orders a cup of coffee from room service and it's brought to him by a maid named Camae.

Watch An Excerpt From The 'Mountaintop' Speech:

Hall says writing the play, and re-creating King's spirit and voice, was a fairly easy task. She is herself a native of Memphis, and Martin Luther King has always been a part of her consciousness.

"I grew up always having his voice in my ears, and in my heart and in my mind," she says.

But channeling King's well-known voice can be a challenge for actors.

Giving Her Mother A Second Chance

Hall's mother grew up around the corner from the Lorraine Motel and had wanted to see him speak at Mason Temple that night in 1968. But she was only 15 at the time, and her mother — Hall's grandmother — refused to let her go.

So her mother didn't go, and the next day King was assassinated.

"[It] was the biggest regret of her life," Hall says of her mother.

Still, that bit of family history is what gave Hall the idea for her play. She even went so far as to name the maid Camae, after her mother, Carrie Mae. 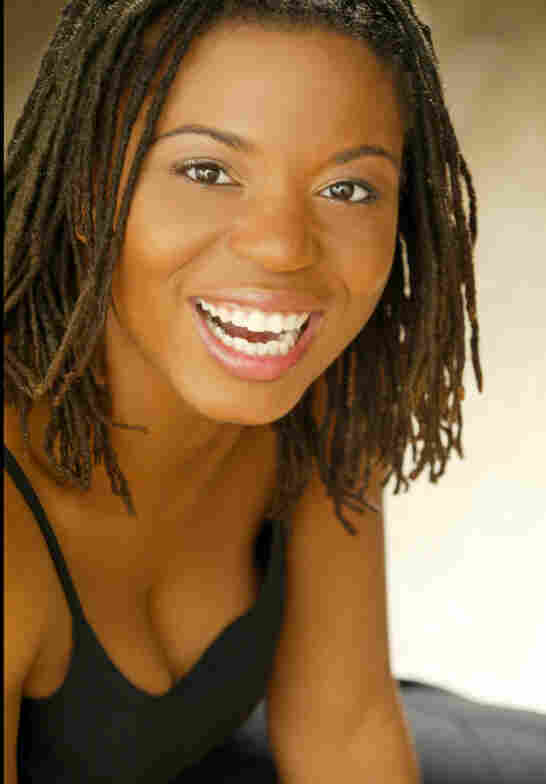 Katori Hall grew up in Memphis, Tenn., and is currently a resident playwright at Washington, D.C.'s Arena Stage. Courtesy of The Corner Shop hide caption 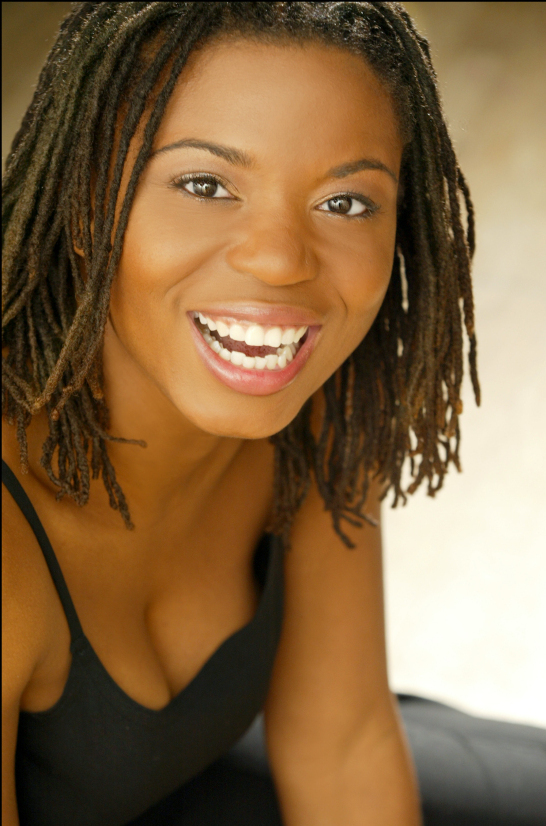 Katori Hall grew up in Memphis, Tenn., and is currently a resident playwright at Washington, D.C.'s Arena Stage.

Courtesy of The Corner Shop

"I wanted to put both of them in the same room and give my mother that opportunity that she didn't have in 1968," Hall says.

Hall says her family held King in high regard. "You walk into my grandmother's house and you see two pictures on the wall. You see Dr. King and you see Jesus," she says.

But Hall wonders how seeing King's Mason Temple speech would have changed her mother's life.

"Maybe she would have lived her life a little differently," Hall says. "Maybe she would have decided to dream a little bigger and start that business that she wanted to start or become that lawyer that she wanted to become just by being in the presence of this magnificent man, who achieved so much — because he was such an inspiration, not only to her, but to so many people around the world."

Yet in her play, Hall challenges the pedestal so many placed King upon. Her representation of him is human — "warts and all," she says. She portrays him as a little vain — he's debating whether or not to shave his mustache — and extremely anxious because of the death threats made against him.

The Mountaintop's King has holes in his socks, feet that smell and an unabashed lasciviousness. (Camae is a beautiful woman, and King does not hide his appreciation of her beauty.)

Watch Scenes From 'The Mountaintop' At The Telegraph

Perhaps not surprisingly, Hall's less-than-glamorous depiction of the beloved civil rights leader wasn't particularly well-received by some members of the theater and black communities. Even some of her favorite directors questioned her bold portrayal of King.

"When I started writing the play, I sent it to a couple of directors who I held on high — I put on a pedestal — and these people were like, 'How dare you do this? Who do you think you are, little black girl?' " Hall remembers them saying. " 'Yes, he may have indulged a little bit. Maybe he did dabble with other women, but how dare you? He is the only thing that we have.' "

"A warts-and-all portrayal of Dr. King is important because there's this extraordinary human being who is actually quite ordinary," she explains. "I feel as though by portraying him with his flaws and foibles, we, too, can see — as human beings who have these flaws — that we, too, can be Kings; we, too, can carry on that baton that he has passed down to us."

Hall's mother may have missed King's "Mountaintop" speech, but she did get to see her daughter's play in London.

"It's so funny," Hall says with a laugh, "because she didn't know that I had named the character after her, so when she heard it, she freaked out."

Hall was worried that her mother would be angry she had written so much cussing into her script.

"But afterwards, she just leapt to her feet and she was just so proud of me," she says.

Hall says she had wanted to write a play that could take her mother back to that night in 1968, and she thinks she pulled it off.

"I saw her throughout the entire play, nodding her head," Hall says. "It was almost like she was being transported back [in] time for that hour and a half in London."