Accessibility links
For Farmers In Fukushima, Japan, Growing Uncertainty The sale of milk, spinach and other leafy vegetables, not just from Fukushima but also from neighboring prefectures, has been banned. The Japanese Health Ministry found that radiation levels in these foods exceeds the legal limits for human consumption. 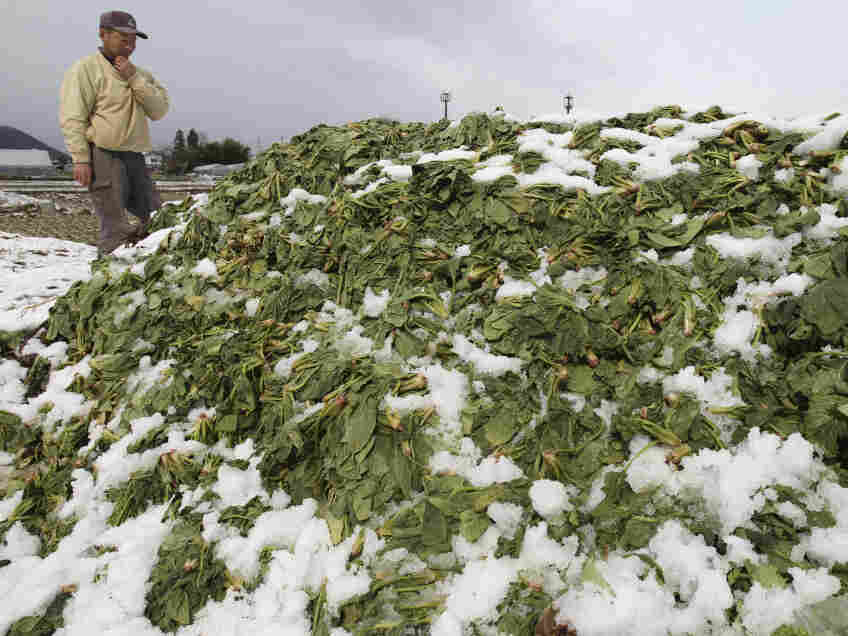 A farmer stands in front of a mountain of spinach, disposed after gathering in Fukushima, Japan, on March 26. The government has banned the sale of milk, spinach and other leafy vegetables from Fukushima and neighboring prefectures. Jun Yasukawa/Yomiuri Shimbun/AP hide caption 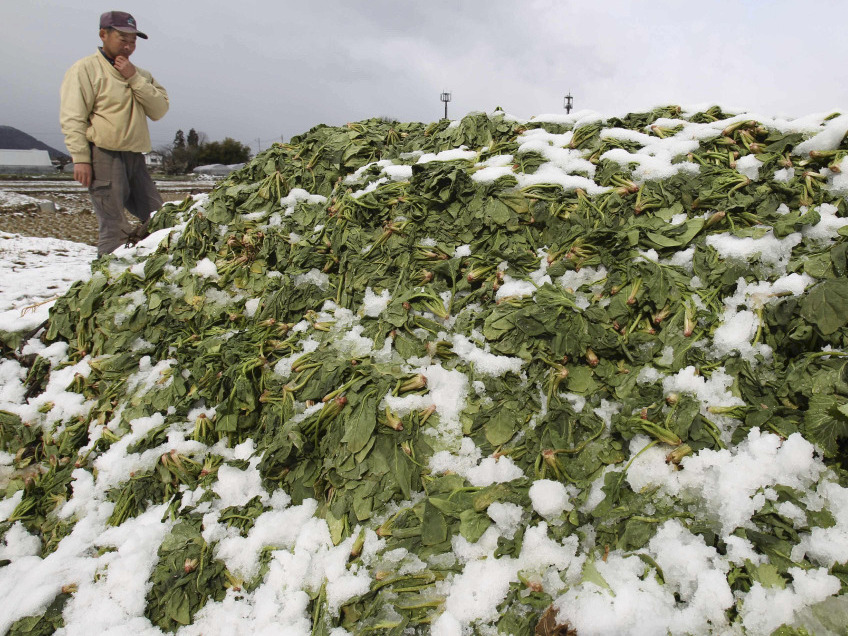 A farmer stands in front of a mountain of spinach, disposed after gathering in Fukushima, Japan, on March 26. The government has banned the sale of milk, spinach and other leafy vegetables from Fukushima and neighboring prefectures.

As Japan continues to grapple with the effects of the March 11 earthquake, the prefecture of Fukushima faces some of the biggest challenges.

Fukushima's roads were damaged in the earthquake, its coast was battered by the tsunami, and now leaking radiation around the crippled Dai-ichi nuclear power plant has made parts of the prefecture unlivable.

The tsunami pushed seawater more than 2 miles inland in some places. Rail lines in Fukushima — Japan's third-largest prefecture — were destroyed along the coast; train traffic still hasn't resumed through the prefecture. Radiation from the leaking nuclear complex has forced tens of thousands of residents from their homes. The sale of many vegetables from Fukushima has been banned.

Akio Nagato, the director general of the Fukushima governor's office, says the tsunami and earthquake mainly affected the coast but the radiation is affecting the entire prefecture, which spans more than 5,000 square miles.

Even outside the 12-mile mandatory evacuation zone around the Fukushima Dai-chi nuclear plant, Nagato says, businesses are packing up and moving. He says the cleanup along the coast has barely started because vehicles can't travel through the nuclear exclusion zone.

The nuclear disaster is now also a disaster for Fukushima's farmers. The government has banned the sale of milk, spinach and other leafy vegetables, not just from here but also from neighboring prefectures.

The Japanese Health Ministry found that the radiation level in these foods exceeds legal limits for human consumption. This has left farmers such as Shinichi Asaka with goods they can't sell.

"We are going to have throw it out," he says through an interpreter, regarding rows and rows of green spinach. "Get a big tractor, load it up and throw it out. There's nothing else to do."

Asaka has a few fruit trees, but he makes his living primarily off spinach. He's now thinking about maybe planting carrots or cucumbers, but he worries that by the time they mature, the government may have banned their sale, too.

Asaka laughs at the idea of doing anything other than farming.

"I was born in a field some 70 years ago, so I've been doing this my whole life," he says.

The Japanese government is telling farmers here to do nothing: Don't harvest crops. Don't plant anything new. Don't till the soil. Just wait and see what happens with the crisis at the nuclear plant.

The government has promised to compensate farmers for the products they are being forced to dump, but it's still unclear where the money will come from for such a program.

Takashi Kano, who is with the local farmers union, says growers can't afford to wait indefinitely.

Kano says farmers are concerned about when they will be able to restart planting. He says if work preparing rice paddies doesn't start by the end of next week, Fukushima probably won't produce a rice crop at all this year. The prefecture and two neighboring ones produce roughly 15 percent of Japan's rice.

Kano says he understands the uncertainty surrounding the situation at the nuclear plant, but he says the government needs to give farmers more guidance so they can move forward with their lives.