Accessibility links
At Nixon Library, A Raw Look At A Disgraced Leader In the 37 years since Richard Nixon resigned the presidency, the Watergate scandal has become synonymous with the abuse of power nearly everywhere — except at the Nixon Presidential Library and Museum. That changed this week, when the library unveiled a new, unvarnished look at that notorious chapter in American history. 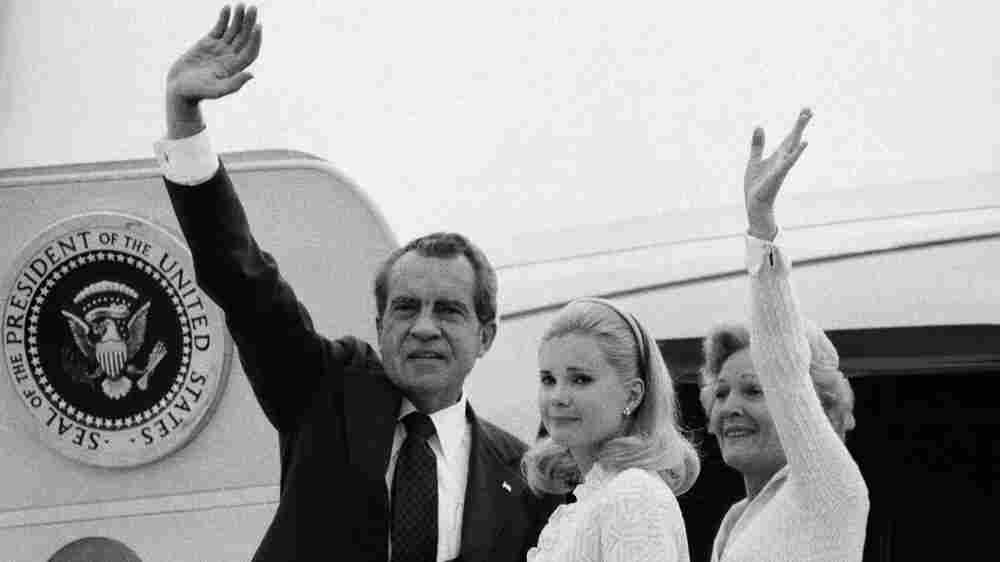 It's been 37 years since Richard Nixon resigned the presidency because of the Watergate scandal.

Since then, Watergate has become synonymous with the abuse of power nearly everywhere — except at the Nixon Presidential Library and Museum in Yorba Linda, Calif. There, it was described as an attempted coup d'etat by Democrats.

But that changed this week, when the museum unveiled a brand new Watergate gallery. 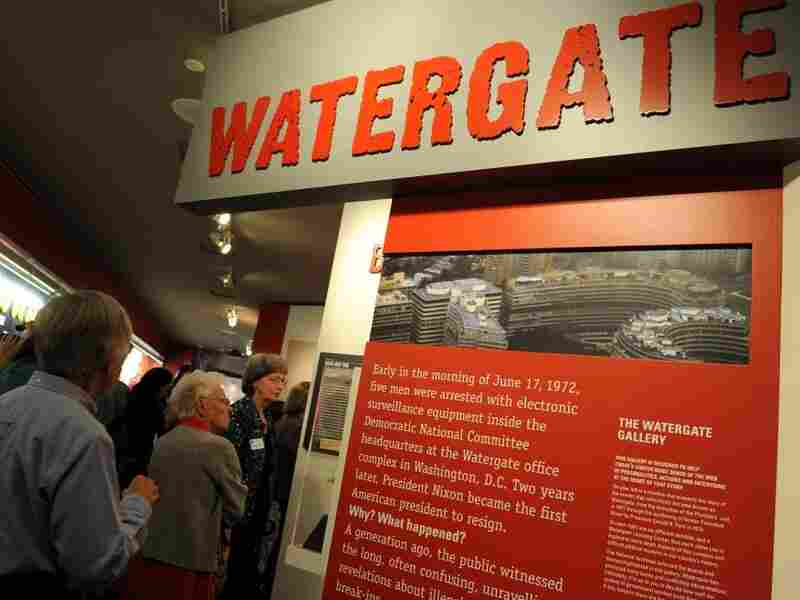 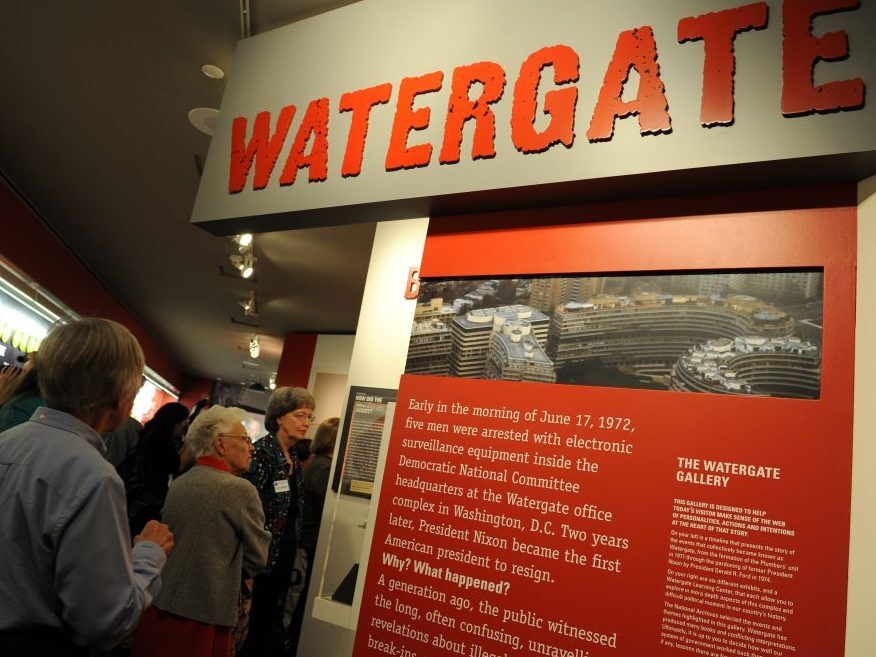 The old Watergate exhibit at the Nixon Library was often ridiculed by historians and academics as an inaccurate, one-sided account.

It seemed to suggest that the scandal was manufactured: "Allegations took on the weight of fact in the minds of those who were determined to engineer a coup."

Washington Post reporters Bob Woodward and Carl Bernstein were portrayed as unethical "in their zeal to create a Watergate story." And a "mechanical malfunction" was blamed for the infamous 18 1/2-minute gap on one White House tape.

Explore the old Watergate exhibit at NixonLibrary.gov, then compare it with the new display.

The library used to be run by a private foundation of loyalists. But in 2007, the National Archives took over. Tim Naftali, the current director of the Nixon Library, said replacing that old Watergate exhibit was an essential part of the deal.

"How could people believe that our archivists were providing unfettered access to documents if our museum were viewed as biased?" he asked.

Naftali, who is also the curator of the new Watergate exhibit, says his goal was to create iPad history.

"Our main client is the 14-year-old visitor who is texting while you are telling them about people not only their grandparents' age, great-grandparents' age," he says, "but from a different era and culture."

Touring the gallery is not unlike surfing the Web. At the center of each section is an interactive video screen where, for example, you can hear some of the famous tapes that Nixon secretly recorded in the Oval Office and read the transcription at the same time — since many of the tapes are difficult to understand.

'He Asked Me To Burn The Tapes'

There's also a section on "dirty tricks" and a discussion of Nixon's "enemies list," a group of perceived critics of the president whom he marked for harassment by government agencies. That group is represented by a photo of the late NPR news analyst Daniel Schorr.

You can also hear excerpts of the 131 oral histories that Naftali recorded with significant Watergate figures.

Clips From The Nixon Library

Alexander Haig: 'He Asked Me To Burn The Tapes'
Nixon: 'If Something Can Be Demolished ...'

For example, just touch the screen and you can hear Alexander Haig, who was Nixon's chief of staff as his presidency unraveled, saying that Nixon's biggest mistake was not burning the tapes — though he thought about it.

"He asked me to burn the tapes," Haig says in the oral history. "He said, 'Would you be willing to do it?' and I said no. I said, 'Get someone who is not going to be held accountable.' "

Except for these oral histories, there is nothing in the gallery that's absolutely new, says Naftali. But there's a lot about Watergate that some scholars know and the general public doesn't.

Everyone knows, for example, that the Watergate scandal came to light with the burglary of the Democratic Party's headquarters by Republican operatives. But there's a tape, says Naftali, where Nixon then plans a break-in of Republican headquarters.

"They would then blame the Democrats for having broken in to the Republican National Committee," Naftali says. "The president discusses how much money it would cost, and how much damage there should be done, and what they should take."

That scheme, and many others hatched by Nixon, never happened, says Naftali, because people in the government said no, "people who received orders that they would not, could not implement.

"That is a story that must be remembered. That is something that we have to teach students and future members of our government," says Naftali, "that you can say no when you're asked to do something that is unconstitutional or illegal."

There was considerable conflict between the National Archives and the Nixon loyalists responsible for the old Watergate exhibit. Naftali says the only substantial change he made in response to their concerns was to include more of Nixon's voice.

Perhaps the most poignant example is his goodbye to the White House staff on the day he left office. Said Nixon: "Those who hate you don't win, unless you hate them. And then, you destroy yourself."

They are the wise words of a disgraced president, unable to take his own advice.