Accessibility links
Roosts Some people swore that the house was haunted. Almost every day for three weeks, we'd find a dead one inside of it. Bill wanted to chop it down, but Mother said no. "They need somewhere safe to die. Someplace warm and maybe a little dry. It stays."

This short story is the winner of Round Five of our Three-Minute Fiction contest. 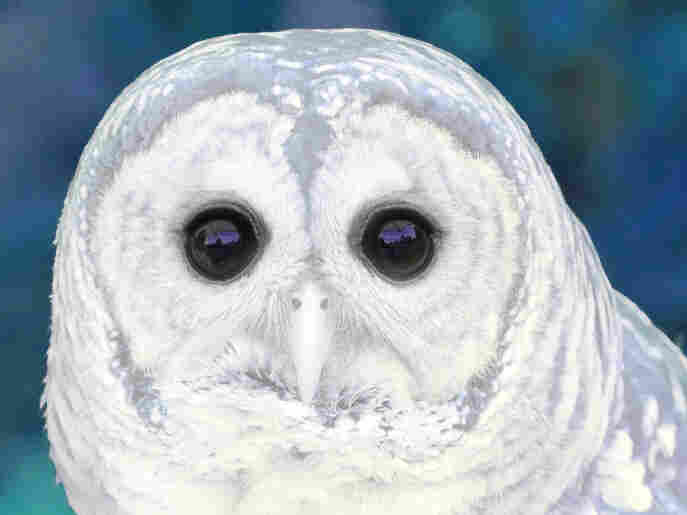 Some people swore that the house was haunted. Almost every day for three weeks, we'd find a dead one inside of it.

Bill wanted to chop it down, but Mother said no. "They need somewhere safe to die. Someplace warm and maybe a little dry. It stays."

The first one we found was a hoot owl. It lay inside the painted blue plywood walls, its face pressed firmly into the floor like it had been dropped from some great height.

Bill buried it behind his woodshed and we all said grace.

That night I saw the owl on a branch outside of my window. It was pale white and almost completely see-through like milk in an owl-shaped glass. It shifted from leg to leg and kept looking over its shoulder. I couldn't see what it was looking for. It was cloudy and the woods were dark.

The next one was a falcon of some kind. Shelby pulled an old bird book from the shelf and we all watched as he turned the pages until we found it.

"Peregrine," he said softly and looked up.

Bill looked closer. That bird shouldn't be around here.

We buried it and said grace, and that night it was on the branch outside of my window. The owl shifted and the falcon ruffled its feathers.

The next day we found three mockingbirds, and that night they were all there on the branch, facing my window.

"Shelby, come see." Shelby woke up, bleary, and blinked against the windowpane. "Trees," he said.

I looked, but the white birds were there. They were shining like moons and the dead leaves curled away from them.

We found a blue jay and a red-tailed hawk. We found a wood thrush, a scarlet tanger and an ovenbird.

We started throwing them in the creek. "Not too close," Bill said. "You don't want to get that stuff on you."

One night I found Bill sitting far away in the truck.

"Why are those birds coming here to die?" I asked. He looked at the keys in his hand and then looked at me.

"Here's as good a place as any. Maybe there's nowhere else to go."

Everyone stopped going out the birdhouse. Shelby would wait by the bird book and solemnly flip the pages for me until we found the right one.

The nightingale was the last one I found. I held it in my hand even though I knew it was poison. It was stiff, but the feathers felt soft and I stood there a while and stroked it. After I threw it in the creek, I turned and saw Mother watching me from the kitchen.

That night, I watched the birds in the trees shifting uncomfortably. As they moved, they left behind faint after-images and the trees flickered with them like Christmas ornaments.

When the peacock arrived, I knew it was the last time I would see them. It was magnificent. It glowed brighter than all the birds, and its tail feathers were as white and pure as flour. They strobed with electricity as it walked solemnly into the clearing by the blue birdhouse.

They lifted, one by one, from the branches and slowly circled overhead. I looked over to where Shelby was sleeping. Pale shadows flickered on the wall.

They circled through the trees like constellations. I wondered for a second if I would be lifted up with them and carried off into the woods. But I stayed.

Then they were gone and nothing was ever the same again after that.