Accessibility links
Daniel Radcliffe Suits Up For 'How To Succeed' The Harry Potter star trades his patronus for a portfolio in the hit musical, which has drawn hordes of children — and their parents — to the Hirschfeld Theatre. 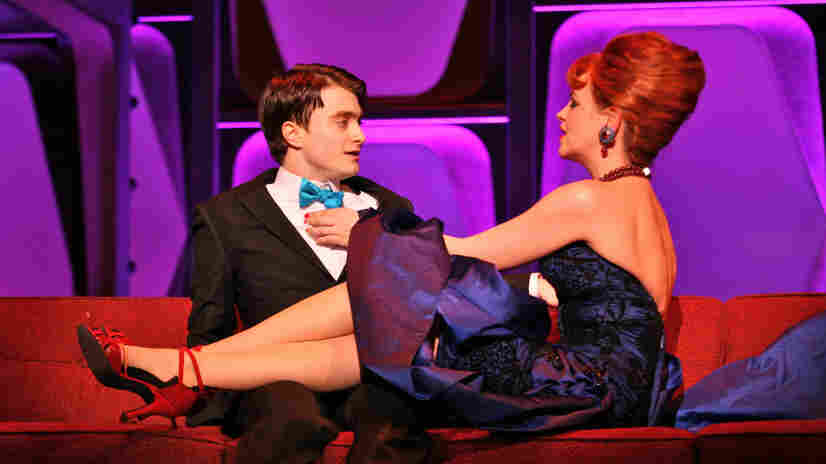 Not a toy: J. Pierrepont Finch (Daniel Radcliffe, left) is an ex-window washer climbing the corporate ladder at the World Wide Wicket Company — where the seductive Hedy LaRue (Tammy Blanchard) is just one of the temptations on the road to success. Ari Mintz/ hide caption

'Happy To Keep His Dinner Warm'

'Happy To Keep His Dinner Warm'

One of the hottest tickets on Broadway is to a 50-year-old musical: How to Succeed in Business Without Really Trying. The Pulitzer Prize-winning corporate satire has a sparkling score by Frank Loesser, but the thing that's packing them into the Hirschfeld Theatre eight times a week is the chance to see a young wizard sing and dance — Harry Potter star Daniel Radcliffe.

Hordes of kids — accompanied by their parents — are coming to Broadway to get a glimpse of Radcliffe in a different role. He's playing J. Pierrepont Finch, a window washer who rises swiftly up the corporate ladder in the musical.

"I think people are coming to see Daniel and actually leaving having seen a musical that Daniel's starring in, which I think is cool," says How To Succeed director Rob Ashford.

And as audiences have learned, it turns out Radcliffe is something of a song-and-dance man.

"I relish the challenge of it and I look forward to hopefully doing it eight times a week," Radcliffe says. "You know, that's what you get paid for! It's about having that appointment with inspiration every night at eight o'clock."

Radcliffe's resume already includes Broadway experience. In 2008, he took on the role of a disturbed teenager in the play Equus, where How To Succeed's producers first spotted him. 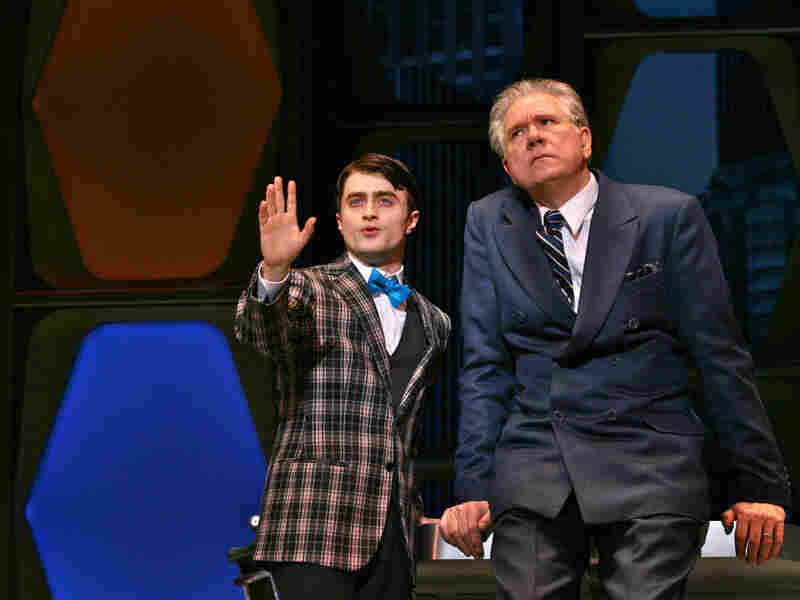 Since then, while filming the final installments of Harry Potter, Radcliffe has taken voice and dance lessons, and worked with a dialect coach.

"He was like an athlete preparing for the Olympics, and that's how he got ready for this," Ashford says.

Previous productions of How To Succeed have featured actors in their 30s playing Finch, the 21-year old Radcliffe felt he could bring something different to the character — an amoral corporate climber.

"It makes him a slightly more compassionate character, and you forgive a lot more because he's young," he says. "You root for him more. And, also, because I'm sort of a little guy and kind of skinny and things, people do tend to, um, root for me, I think!"

"I will be bluntly honest," he says. "It could have been almost any play, and if somebody had called me and said we want you to be in Bluh, Bluh, Bluh co-starring with Daniel Radcliffe, the answer would've been 'Yes.'"

Ashford's staging makes the most out of the enormous height difference between the two actors. He's turned "Grand Old Ivy," a parody of a football fight song, into one of the show's highlights.

"It's a great number; it does stop the show, too, which was quite exciting to hear for the first time when we did it in front of an audience at the first preview," says Larroquette.

But it's the musical's finale, "The Brotherhood Of Man," in which Radcliffe really gets to show off his dance moves.

"That whole number was constructed and geared toward the first time, really, in the show that Finch is in charge; that everyone dances the Finch way," Ashford says. "But, then, through the course of it, it ends up being one big celebration."

Radcliffe, who's committed to perform in How To Succeed for the next year, says he's been having a ball winning over some Muggles.

"What's lovely for me is there is a huge amount of support from all the Potter fans coming in," he says. "There's also, you know, a lot of Broadway fans coming in, as well, which is what's very exciting to me."