Accessibility links
U.S. Works To Help Iraq's Air Force Take Off Iraq's air force was totally destroyed as a result of the Gulf War in 1991 and the U.S. invasion in 2003. Now the U.S. Air Force is helping the Iraqis to rebuild it. It's just one component of what some describe as an emerging long-term strategic relationship between Iraq and the United States. 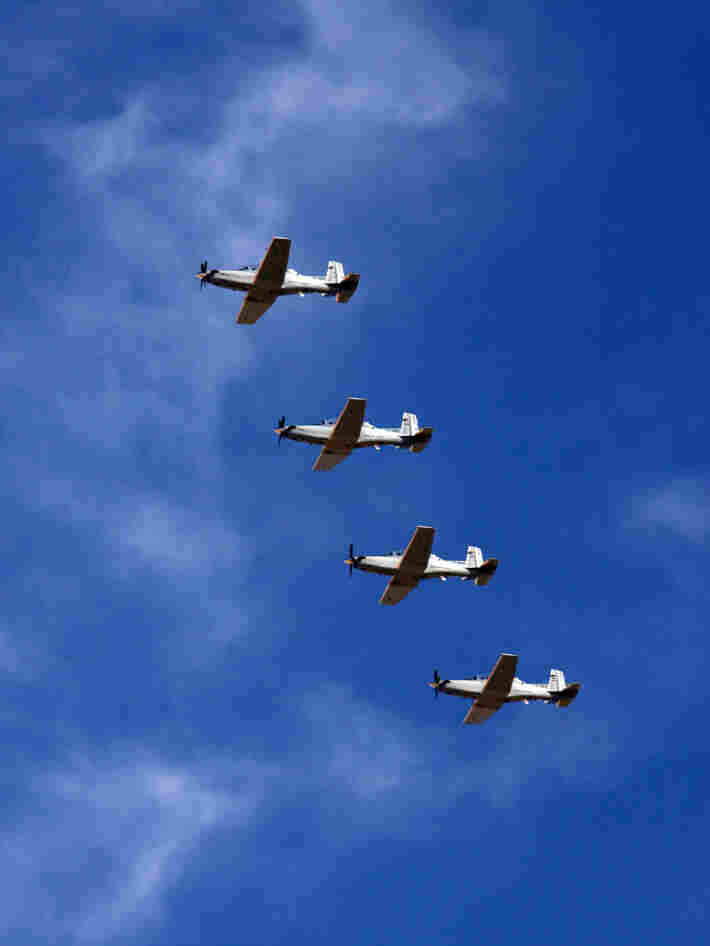 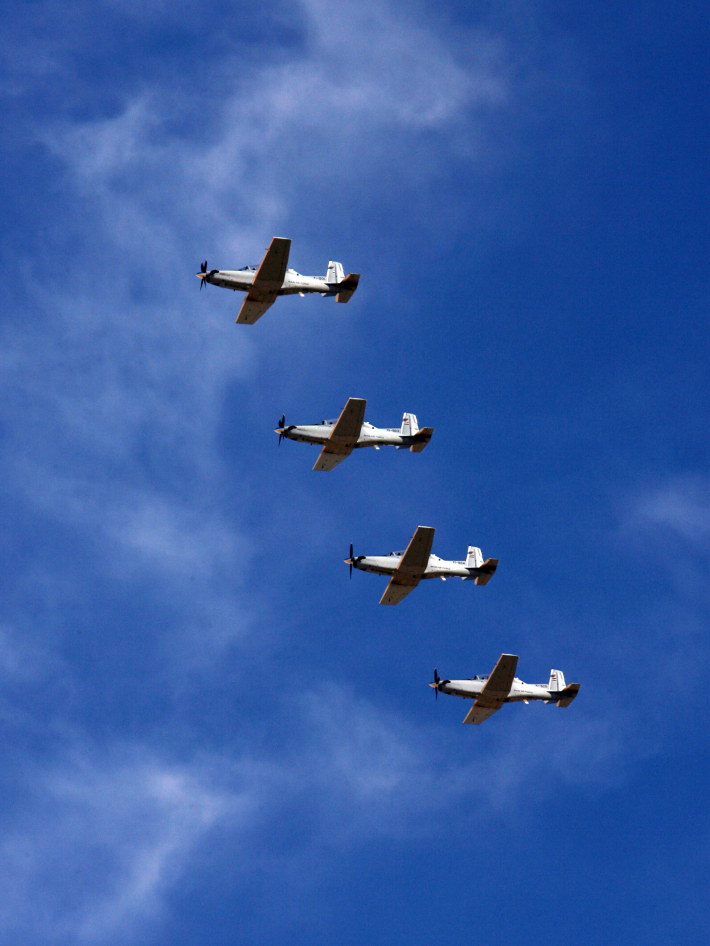 T-6 planes for pilot training fly over the Iraqi Air Force academy during its reopening ceremony north of Tikrit in December 2009.

Of the 49,000 American troops still in Iraq, some 1,600 are assigned to advise and train the Iraqi military and police.

Now the U.S. Air Force is helping the Iraqis to rebuild it. It's just one component of what some describe as an emerging long-term strategic relationship between Iraq and the United States.

Saddam Hussein spent a lot of money on his air force. It had Soviet and French jet fighters and all the necessary infrastructure to keep them combat-ready.

Iraqi fighter pilots went to war in the 1980s against Iran. That war took its toll, and only three years after that, Saddam was at war again — this time against the United States.

He sits in an air-conditioned office at Camp Liberty in Baghdad. It belongs to Brig. Gen. Tony Rock, who is now in charge of the U.S. project to rebuild the Iraqi Air Force. Rock and Hussein look at each other and ponder the possibility that they might have flown missions against each another.

Now the two are working together to build a new Iraqi Air Force — a daunting challenge, Hussein says.

"The Iraqi Air Force and the Iraqi helicopter capabilities were destroyed in two wars in a 20-year span," Rock adds.

So the Americans are starting from scratch — training young Iraqi cadets to fly and then training the new pilots to train other novices. And much more, says Rock.

"It's really not just about acquiring airplanes. Sometimes buying equipment is the easiest thing you do," he says. "It's developing people and it's also making sure that your infrastructure — runways, control towers, hangars, maintenance facilities — are all evolving at the same rate."

Young Iraqi pilots are already in the air, flying every day with their American trainers, learning skills like aerial intelligence and surveillance in a King Air dual-prop plane.

The newest pilot trainees are stationed at Tikrit, north of Baghdad.

The trainees fly a single-prop plane called a T-6. They fly during the day and at night, to different parts of Iraq. And when they return, they are debriefed by the American instructors, sometimes in front of a group of about a dozen trainees.

In one recent session, trainees were presented with the problem: What do you do if fire breaks out in the engine?

Capt. Joss Martin was critical of how a young Iraqi pilot handled the scenario.

"He really hasn't established what is wrong with the aircraft. He just has lights on the glare shield," Martin says. "So once the fire is confirmed and everything like that, then run with the rest of the checklist."

'We Have To Do Something For Our Country'

Hussein also takes part in these sessions. The Iraqi trainees are his men. He is not satisfied with the way one trainee led another through a complex scenario involving navigating to a runway under duress.

"You led him to eject with no reasonable reason," Hussein says. "He should be able to make the runway."

The Tikrit base also is home to the Iraqi Air Force College, which began operating only last September.

Brig. Gen. Karim Aziz commands the college. He, too, was a fighter pilot in Saddam's air force, but he says he had no trouble making the decision to come back and work with the Americans.

"You know the situation outside — I mean, the situation around Iraq, outside the border," he says. "Many enemies. Many challenges in front of Iraq. We have to do something for our country."

The United States is committed to removing the last of its troops by the end of December.

This presents some problems. Back in Baghdad, Lt. Gen. Michael Ferriter, who is in charge of the Iraq Training and Advisory Mission, acknowledges there are gaps in Iraq's capacity to defend itself. The U.S. needs more time, he says — first, to get the army capable of defending Iraq's borders.

"That'll take a little bit of time for them to get there. It'll go beyond December of this year," he says.

"They are fielding air operations centers and long-range radars. And that allows them to sense what happens in their airspace," he says. "It'll take them to the summer of next [year] before they can sense the entire airspace."

Plus, it was recently disclosed that Prime Minister Nouri al-Maliki wanted to buy 18 American F-16s at a cost of about $900 million. But then demonstrations broke out across the country — protesters expressing their dissatisfaction with the government.

The F-16 purchase was put on hold.

So a variety of obstacles — time, money and public protest — remain in the pursuit of a long-term strategic relationship between Iraq and the U.S.