Accessibility links
Being Bilingual May Boost Your Brain Power Many believe that learning more than one language from birth confuses children. But researchers say the evidence to the contrary is quite strong: Being bilingual is a form of mental exercise that is beneficial for the brain. 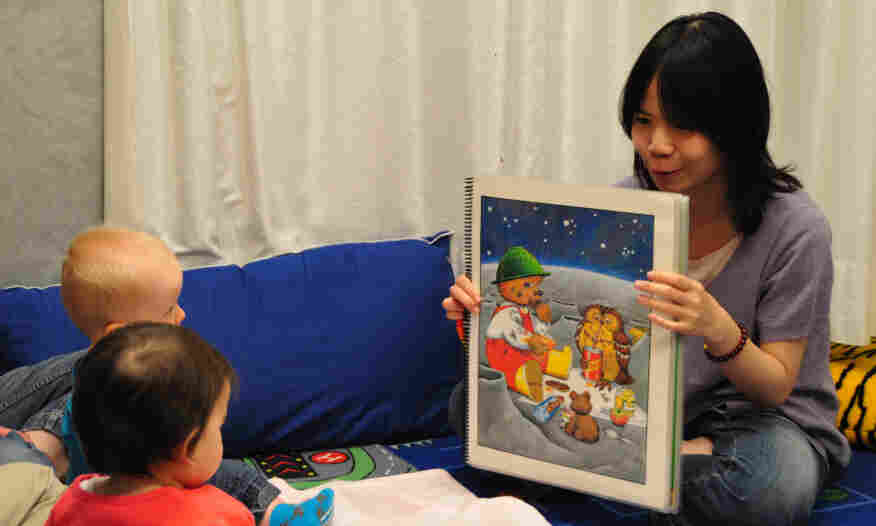 In an interconnected world, speaking more than one language is becoming increasingly common. Approximately one-fifth of Americans speak a non-English language at home, and globally, as many as two-thirds of children are brought up bilingual.

Research suggests that the growing numbers of bilingual speakers may have an advantage that goes beyond communication: It turns out that being bilingual is also good for your brain.

Judy and Paul Szentkiralyi both grew up bilingual in the U.S., speaking Hungarian with their families and English with their peers. When they first started dating, they spoke English with each other.

But they knew they wanted to raise their children speaking both languages, so when things turned serious they did something unusual — they decided to switch to Hungarian.

Today, Hungarian is the primary language the Szentkiralyis use at home. Their two daughters — Hannah, 14, and Julia, 8 — speak both languages fluently, and without any accent. But they both heard only Hungarian from mom and dad until the age of 3 or 4, when they started school.

"When she did go to preschool that accent was very thick – she counted like Vun, two, tree," said Judy Szentkiralyi, recalling Hanna's early experience with English. "And by the time four or five months went by, it was totally gone."

The Szentkiralyis say that most people were supportive, but not everyone. Paul recounts an uncomfortable confrontation Judy once had in the local grocery store.

"I remember one time you came home and you said this one lady was like, 'When is she going to learn English?' And it was like, 'Well, when she goes to school she'll learn English,'" he said.

For a bilingual who really has two good languages that they use, both of them are always active.

Ellen Bialystok, a psychologist from York University in Toronto

"People would often say, 'Well, won't they get confused?" added Judy. "And I would have to explain, 'Well, no, it wasn't confusing for us.'"

The idea that children exposed to two languages from birth become confused or that they fall behind monolingual children is a common misconception, says Janet Werker, a psychologist at the University of British Columbia who studies language acquisition in bilingual babies.

"Growing up bilingual is just as natural as growing up monolingual," said Werker, whose own research indicates babies of bilingual mothers can distinguish between languages even hours after birth.

Werker and other researchers say the evidence to the contrary is actually quite strong. Instead of holding you back, being bilingual, they say, may actually be good for you.

Tuning In To The Right Signal

Ellen Bialystok, a psychologist from York University in Toronto, says the reason lies in the way the bilingual mind uses language.

"We don't really know very much in psychology," said Bialystok. "But the one thing that has been so overwhelmingly proven, that I can say with great certainty, is this: For a bilingual who really has two good languages that they use, both of them are always active."

In other words, no matter what language a person is speaking at the moment, both languages are active in the brain.

"The evidence is very dramatic. Even if you are in a context that is utterly monolingual, where you think there is absolutely no reason to think about Chinese or Spanish or French, it is part of the activated network that's going on in your brain," she said.

This means that bilinguals have to do something that monolinguals don't do — they have to keep the two languages separate. Bialystok likens it to tuning into the right signal on the radio or television: The brain has to keep the two channels separate and pay attention to only one.

Constantly engaging this executive control function is a form of mental exercise, explains Bialystok, and some researchers, including herself, believe that this can be beneficial for the brain. Bilingual speakers have been shown to perform better on a variety of cognitive tasks, and one study Bialistok did found that dementia set in four to five years later in people who spent their lives speaking two languages instead of one.

"They can get a little extra mileage from these cognitive networks because they have been enhanced throughout life," said Bialystok.

And the advantages of bilingualism may be due to more than just "mental fitness." Bialystok says there's some preliminary evidence that being bilingual may physically remodel parts of the brain. It's something researchers are only beginning to look into, but she says there is reason to believe that speaking a second language may lead to important changes in brain structure as well.