Accessibility links
After W. Va. Mine Blast, Confusion Impeded Search One year after a West Virginia mine explosion took 29 lives, an NPR News investigation shows that questions persist about the time it took to find and identify victims, and notify their families. 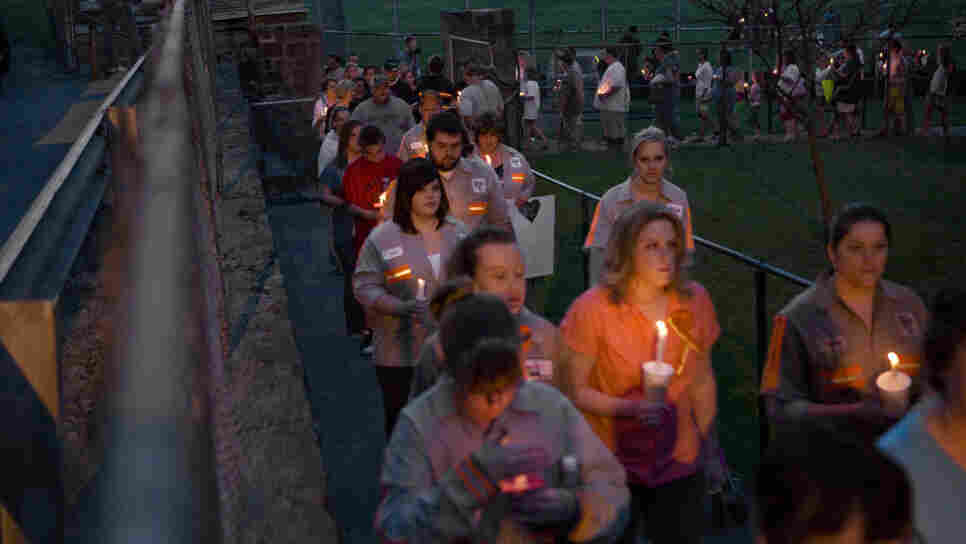 Community members, friends and family participate in a vigil held for the victims of the Upper Big Branch mine in front of the Whitesville Elementary School on April 7, 2010. Kayana Szymczak/Getty Images hide caption 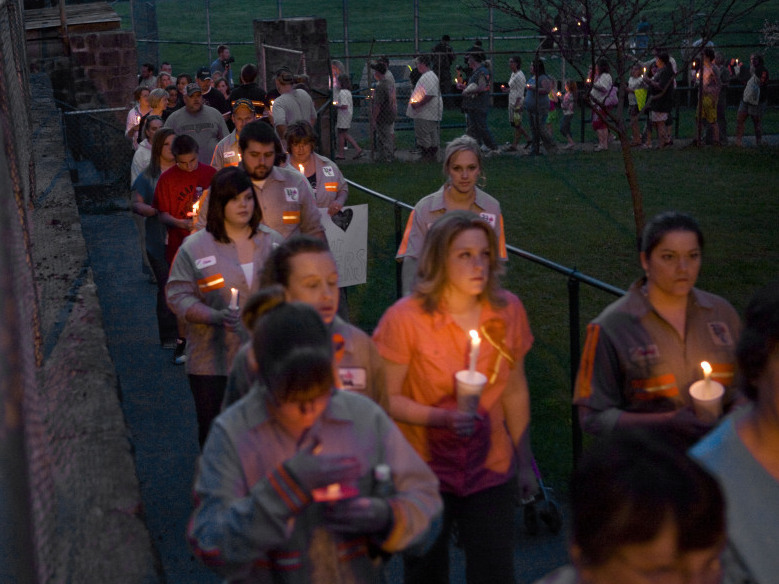 Community members, friends and family participate in a vigil held for the victims of the Upper Big Branch mine in front of the Whitesville Elementary School on April 7, 2010.

Part two of a two-part series.

One year after a West Virginia mine explosion took 29 lives, questions linger about the time it took to find and identify victims, and notify their families.

An NPR News investigation has discovered new details about the search and rescue effort, and problems that plagued mine rescuers.

The new details emerged from an analysis of command center notes and other documents obtained by NPR.

The documents include hand-scrawled lists of miners indicating officials at Massey Energy, the owner of the Upper Big Branch coal mine, had trouble determining who was underground when a fiery explosion roared through the mine on April 5, 2010.

The notes also indicate difficulty identifying which miners were underground and where they were located in the vast mine.

That task was complicated because the explosion occurred during a shift change.

One list suggests miners who died in the explosion were working with miners who weren't even there. Another dated nine hours after the blast names miners believed to be working at the longwall section where the explosion was triggered. Some names are misspelled. Some don't list job assignments, which might indicate the miner's precise location. And one entry has a job assignment but question marks in place of a name.

That prompted Davitt McAteer, who was appointed by former West Virginia Gov. Joe Manchin to lead an independent investigation of the Upper Big Branch explosion, to ask:

"You mean to tell me that in today's age, where computers can tell you within seconds the level of production off a longwall and where that coal is moving along the conveyor belt, we can't keep track of people? That's unacceptable."

Command Center Notes From The Upper Big Branch Mine Search

A new electronic tracking system was partially installed at the mine but it wasn't helping, says Kevin Stricklin, the administrator for coal mine safety and health at the Mine Safety and Health Administration (MSHA).

"It was a very frustrating time on site for me to know how many people were unaccounted for," Stricklin recalls. "Massey just kept giving me different numbers. I mean, we should know exactly how many people are underground."

McAteer says Massey didn't bother to check the tracking system for names and locations of miners. The company "was still using the, 'Well, we think they were at such and such a section because that's where they usually were,' " method, McAteer says.

Shrouded in respirators, mine rescue teams had to navigate dark, smoky and gassy entryways or tunnels, which had steel tracks twisted like pretzels and mile after mile of debris.

"You're sending them into a void," McAteer says. "And they have to look everywhere. It compounds the problem that they're going to face. It slows them down." 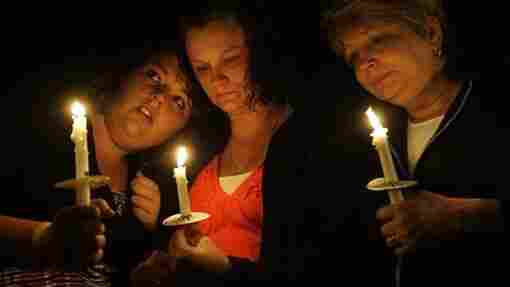 Relatives of Dean Jones, one of the 29 miners killed in the April 5 explosion of the Upper Big Branch mine, gathered for a vigil on April 10 with other families of the blast victims. From left are Julie Jones, Cassie Jones and Susan England. Carolyn Kaster/AP hide caption 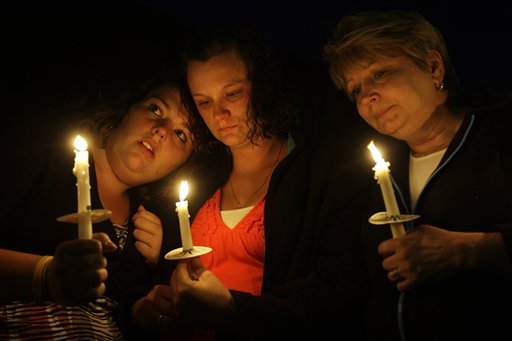 Relatives of Dean Jones, one of the 29 miners killed in the April 5 explosion of the Upper Big Branch mine, gathered for a vigil on April 10 with other families of the blast victims. From left are Julie Jones, Cassie Jones and Susan England.

The families of the miners were also desperate for information. Seven families learned their loved ones had died that first night after nine miners were found in and close to a mantrip, or shuttle car, about 1.6 miles from the mine entrance.

But it took nearly eight hours to determine that 22 more miners were missing, according to the command center notes. At 10:53 p.m., the notes say, "22 unaccounted for MIA." The explosion occurred at 3:02 p.m., according to MSHA.

The anxious families of those 22 missing miners gathered at a Massey Energy storage building near the mine entrance and began a vigil that would stretch four days.

"I was truly convinced, truly convinced, that my brother was going to come out of there alive," says Judy Jones Petersen, a Charleston physician whose brother Dean Jones was at the end of his shift when the blast hit.

Petersen and Jones' wife, Gina, and her five sisters sat, slept, ate and waited, day and night, in metal folding chairs on a floor stained with tobacco spit. They became known as the "sisters on the wall" because they maintained their vigil against a side wall and near the podium where announcements were made.

"It was what I would describe as hell," Petersen recalls. "Not knowing. Waiting in those terrible conditions. Families suffering side by side."

To honor the victims on the first anniversary of the Upper Big Branch mine disaster, the following events are taking place this week in West Virginia:

Raleigh County — Businesses and residents are asked to observe 1 minute and 29 seconds of silence and darkness, with a blackout of lights at that time.

Statewide — Churches are asked by acting Gov. Earl Ray Tomblin to ring bells 29 times and to observe a moment of silence "for all miners who have perished and for those who continue to work in harm's way."

Whitesville — Families of the Upper Big Branch victims gather at the Whitesville Elementary School with emergency responders and mine rescuers for a private memorial service. State and federal officials will attend. A live video feed will be provided at http://www.facesofthemine.com/.

Whitesville — A candlelight vigil begins at a makeshift memorial.

Nearly 12 hours after the explosion, Massey Energy announced 18 bodies had been found and four miners were still missing. But no names were provided for another four days.

Some families actually engaged in macabre debates, Petersen says, about which miners might have survived.

Mine rescuers were focused on finding the missing miners so they didn't recover or identify those who died. But two Massey executives were also underground for at least nine hours after the explosion, according to the command center notes.

Massey Energy says Chris Blanchard and Jason Whitehead were trying to find survivors. Blanchard is president of Performance Coal, the Massey subsidiary that operates Upper Big Branch. Whitehead was director of underground operations at the time. He has since been promoted and is now a Massey Energy vice president. Neither were certified mine rescuers on the day of the blast.

At 9:58 p.m., the command center notes report the discovery of three bodies in the longwall area. Six minutes later, there's this entry: "The 3 victims were [word unclear] identified By Blancher [sic] In Track."

That, Petersen says, would "allow that family to leave the hellish nature of what we went through. But it didn't happen."

A spokesman for Massey Energy does not dispute the notion that Blanchard identified victims. But Shane Harvey, the company's vice president and general counsel, says Blanchard's "observations, made in difficult underground conditions, did not meet the standards of the protocol" for positively identifying victims and notifying families.

That protocol, Harvey says, was established by Massey, MSHA and the West Virginia Office of Miners Health, Safety and Training.

"All families were notified," Harvey adds, "once positive identifications were made in accordance with the protocol."

"You have to be absolutely, positively certain, and during this operation we were not," Stricklin says. "In fact, there were no names associated with bodies as we were finding them."

Confusion Inside The Mine

Blanchard and Whitehead traveled nine miles underground, according to Massey Energy. And it appears their movement underground added to the confusion. The pair left footprints and used and discarded emergency breathing devices called self-rescuers or SCSR's.

"The one positive thing that we've seen is that there's a cache of SCSR's that miners would go to if something were to occur," explained Stricklin at a news conference early on the morning of April 6. There are indications, Stricklin added, "that SCSR's were taken from that area."

Used and discarded SCSR's bolstered hope that some miners might have reached refuge chambers underground. 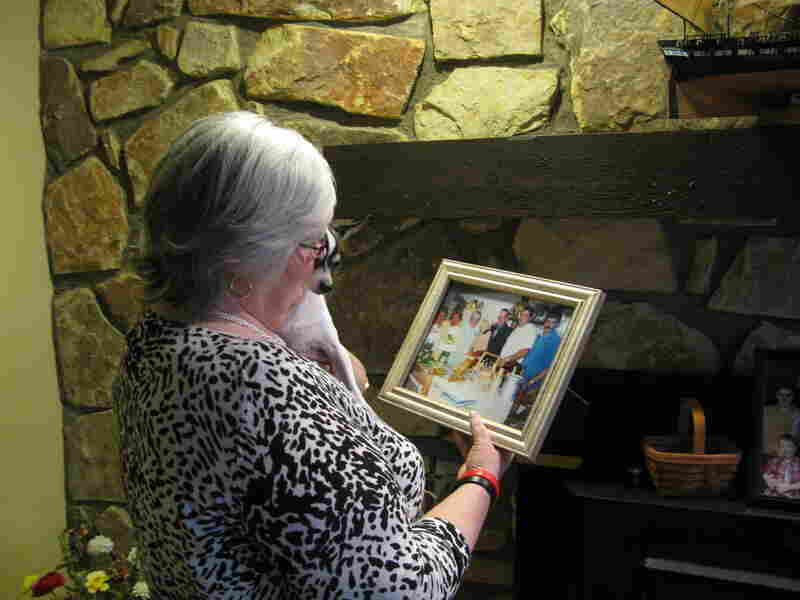 Judy Jones Petersen with a treasured photo of her family. After the Upper Big Branch mine blast, she had to wait four days to learn the fate of her brother. Howard Berkes/NPR hide caption 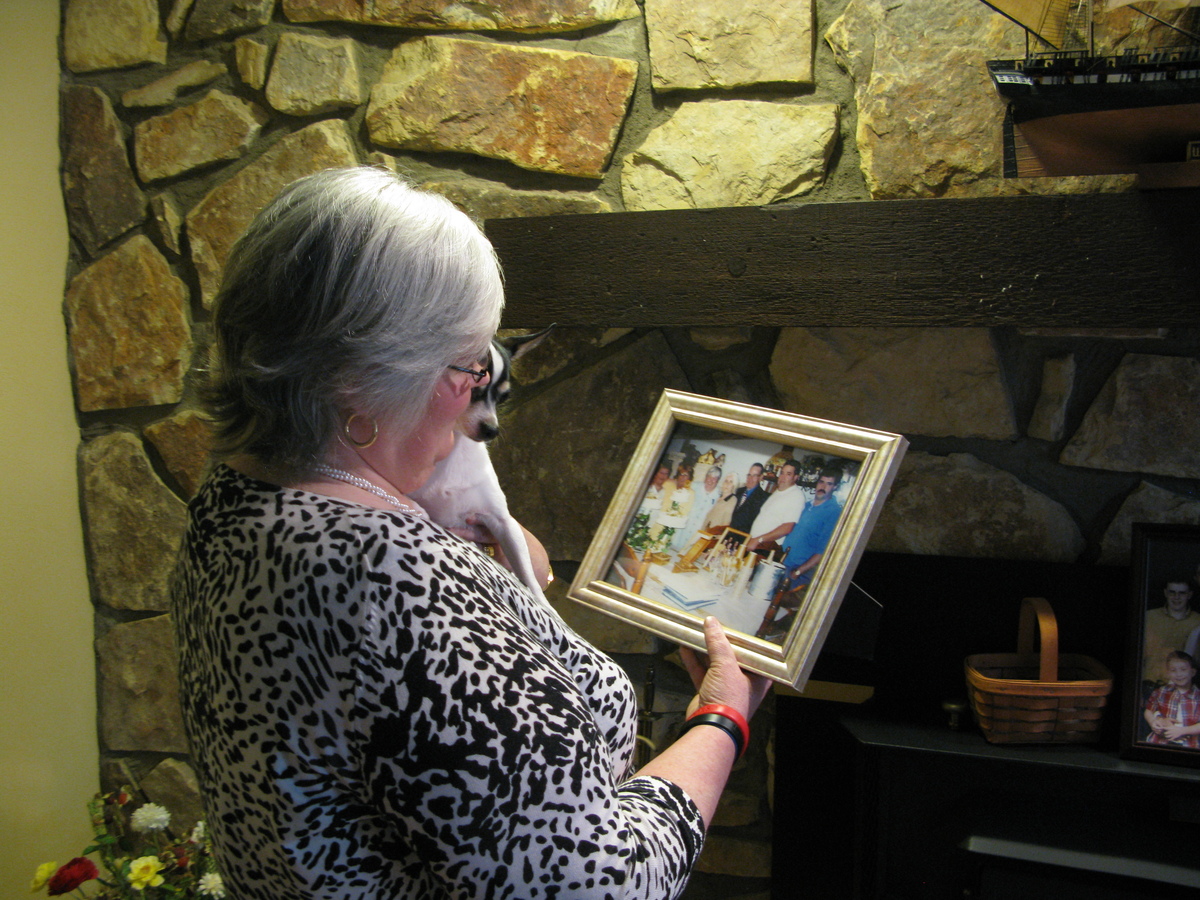 Judy Jones Petersen with a treasured photo of her family. After the Upper Big Branch mine blast, she had to wait four days to learn the fate of her brother.

Clarification of these questions is elusive because Blanchard and Whitehead and 16 other Massey managers and executives have refused to testify in the Upper Big Branch investigation.

"It's really the first time on such a large scale that a management team has declined and it's unprecedented, to my knowledge, in this country," says McAteer, who once led MSHA and has investigated two other major mine disasters.

Both Stricklin and McAteer indicate their final investigative reports will include more about the confusion underground.

It wasn't until just after midnight April 10 that the waiting ended for the 22 families crowded into the Massey storage building near the mine entrance.

Pain Persists For Mine Disaster Family

State troopers and social workers filtered in and families were told an announcement was coming. Petersen and the "sisters on the wall" braced for the news.

"It was solemn" at first, Petersen says. "As soon as [Massey chief operating officer] Chris Adkins said, 'All men accounted for. No survivors,' immediately people started screaming. People were falling down. Chairs and tables were flying. It was absolute, dangerous chaos."

Petersen quickly led Dean Jones' stunned wife, Gina, out the door to safety, with the crying and the wailing fading behind them.