Accessibility links
Cracks Found In Three More Southwest Jets Safety officials are inspecting other planes in the fleet after a hole developed Friday in the fuselage of a jet carrying 123 people. The plane made an emergency landing, and no serious injuries were reported. 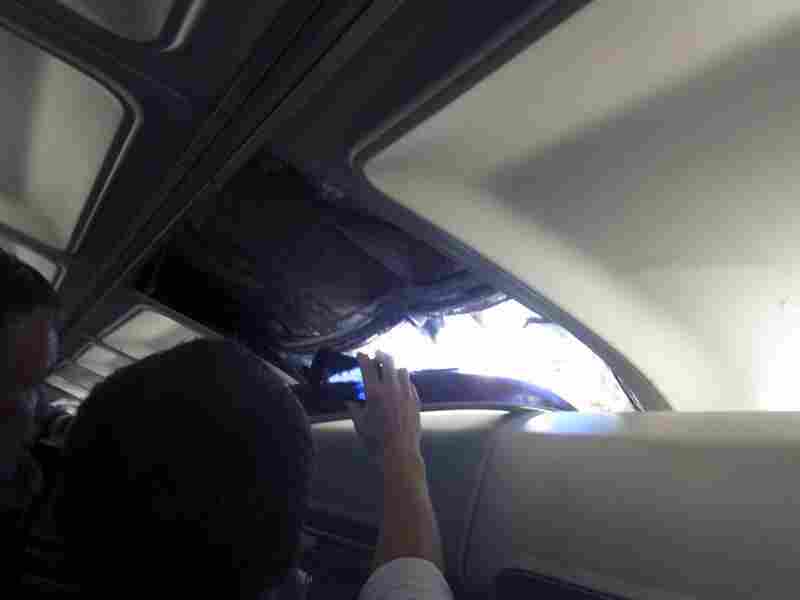 In this photo provided by passenger Brenda Reese, an unidentified passenger takes photos with a cell phone of a hole in the cabin on a Southwest Airlines aircraft. Brenda Reese/AP hide caption

Inspectors have found small subsurface cracks in three Southwest Airlines planes, after another jet developed a hole in its fuselage while in flight Friday and made a safe emergency landing.

Over the weekend, the airline grounded 79 jets and canceled hundreds of flights to check for further problems.

Flight 812 took off from Phoenix, headed for Sacramento, Calif., on Friday afternoon. Shawna Malvini Redden says she had a window seat in row 8. Less than 20 minutes into the flight, she says, there was a very loud pop.

"It sounded like a gunshot," Redden says. She covered her ears and felt air rushing around her.

"The [oxygen] masks dropped down, and I remember feeling shaky and a little lightheaded, trying to put my mask on," Redden says.

At 34,500 feet, the plane lost pressurization. Behind Redden, a ceiling panel was ripped open and passengers could see outside.

Redden says she turned to the stranger sitting next to her.

"I just remember looking at him and thinking, 'You know, if we're going down, I need to hold this guy's hand,' " Redden says. "We just held hands and prayed for a few minutes. But luckily we were able to get down to 10,000 feet to a lower altitude, and we didn't need the masks anymore."

The jet made an emergency landing in Yuma, Ariz., Friday afternoon. Southwest says none of the 118 passengers and five crew members suffered serious injuries.

"Southwest, of course, has had issues in the past with the roof and fuselage of their aircraft," says Jim Hall, former chairman of the National Transportation Safety Board during the Clinton administration.

In July 2009, a Southwest flight from Nashville to Baltimore made an emergency landing in Charleston, W.Va. It had a hole about a foot long in the fuselage. Both the 2009 and the latest incidents involved Boeing 737-300 aircraft.

"When I heard it was a 737-300, I knew that it was an aircraft that had been around awhile and had a number of miles on it," Hall says.

Southwest says the plane is 15 years old — about four years beyond the average age of the airline's fleet. But the airline maintains that is not too old to be in service.

A cycle is a takeoff and a landing, and they are important because they're stressful on a plane. Southwest jets undergo more cycles a day than aircraft from most other airlines.

Short turnaround times at the gate are part of the company's reputation for being efficiently run. Some have speculated that because Southwest squeezes more out of its aircraft, that might play a role in incidents like this. But Southwest disputes that.

"While we have a high utilization of our aircraft fleet, we obviously have been complying with whatever maintenance intervals might be required as a result," Rutherford says.

Still, Southwest has been in trouble over maintenance in the past. In March 2009, the airline settled with the Federal Aviation Administration and agreed to pay a $7.5 million fine for failing to perform mandatory inspections for fuselage fatigue cracking on nearly 60,000 flights.

The company says it's cooperating with federal investigators looking into the latest incident.