Accessibility links
The Nation: Women Under The Budget Knife As Congress — and individual states — come to terms with grappling with their budget woes, Katha Pollitt of The Nation argues that some of the proposed cuts seem likely to impact women the most, since women tend to work in the areas slated to receive the largest slashes.

The Nation: Women Under The Budget Knife

The Nation: Women Under The Budget Knife 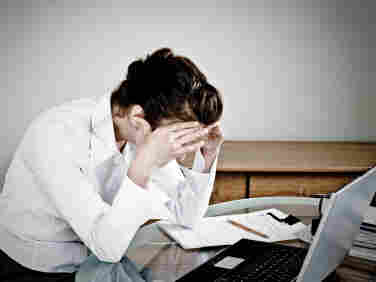 With budget cuts looming, some worry that women will be hurt the most, due partly because they tend to work in areas that are slated to receive the largest cuts. iStockphoto hide caption

Katha Pollitt is a longtime contributor to The Nation where her Subject to Debate column appears every other week.

Remember "shared sacrifice"? Like the rain, the budget cuts were supposed to fall on all alike. But somehow men seem to be ending up with more than their share of umbrellas, and women are getting soaked. Attacks on reproductive healthcare are openly aimed at women and have gotten a lot of attention — like the House vote to defund Planned Parenthood and eliminate the Title X family planning program, which has fortunately been blocked in the Senate. Less visible are the ways federal, state and local government cutbacks, touted as neutral and necessary belt-tightening, will fall disproportionately on women.

The cuts will affect women in three ways. Partly as a legacy of private sector discrimination, a huge proportion of working women are employed by government or government contractors, and they tend to work in the very areas slated for the most drastic slashes — education, healthcare, social services, libraries, legal aid, secretarial and other office work. Moreover, because they are more likely to be poor, old and caring for children or relatives, women are the major recipients of social services. Thus, when a senior center is closed down, not only is the elderly person deprived of care likely to be female, the staffer who prepared her lunch or organized her group activities is probably a woman too — and so is the relative who now must take up the slack. When Head Start and childcare slots are eliminated — the Continuing Resolution for fiscal year 2011 proposed by the House axes 368,000 of them — tens of thousands of teachers and aides, almost all female, lose their jobs, and so do many mothers who rely on them. Add massive proposed cuts in the Women, Infants and Children feeding program and the Maternal and Child Health Block Grant, and the abolition of the Women's Educational Equity program (which monitors schools' compliance with Title IX), and it's almost as if there was some kind of concerted plan to undo forty years of progress for women — and, especially, to make sure poor women stay poor.

Consider New York: newly elected Governor Andrew Cuomo plans to cut more than $300 million in human services. According to a devastating report by the Fiscal Policy Institute prepared for the New York Women's Foundation, "A Harder Struggle, Fewer Opportunities," the Cuomo budget will slash funding for nonresidential domestic violence programs and summer youth employment programs; defund 105 New York City senior centers; cut $7 million in childcare services for welfare recipients; eliminate transitional jobs programs and childcare for low-income college students; and reduce funding for after-school programs as well as the Nurse-Family Partnership home visiting program. There will be huge cuts in housing help for homeless families, four out of five of which are headed by single mothers; in public schools; and in SUNY and CUNY, where nearly 60 percent of the students are female. In many cases, these cuts come on top of previous ones — since 2008–09, almost 13,000 teachers and support staff have been laid off. As Judith Kurens pointed out in the Gotham Gazette, homeless women, many of whom are fleeing domestic violence, will be forced to choose between their abusers and the streets.

It's worth noting that Governor Cuomo is a Democrat, and that he is insisting on letting the so-called "millionaire's tax" on high earners lapse. That tax would bring in around $5 billion — enough to prevent all of these cuts and alleviate much of the pain caused by the recession. Instead of making the well-off shell out a bit extra in hard times (in New York City, the top 1 percent receive 44 percent of total income), Cuomo prefers to plunge struggling mothers deeper into poverty — and their children along with them. Never mind that the state will be living with the long-term consequences — violence, sickness, educational failure, joblessness and every kind of misery — for years to come.

Consider Wisconsin: Governor Scott Walker sparked widespread outrage for limiting the bargaining rights of public sector unions to wages. Less noted was the curious fact that public safety workers — cops, firefighters and security officers — were exempted from his ire. The obvious, cynical reason is that unions representing teachers, nurses and social workers tend to support Democrats, while public safety workers are solid for Republicans. (That also explains why right-wingers like Walker feel free to bash teachers as incompetent, lazy freeloaders but never allude to the well-known romance between cops and doughnuts, let alone their generous retirement packages.) But is it entirely an accident that the workers deemed unworthy of full bargaining rights are overwhelmingly women, engaged in stereotypically female caring work, and that those whose rights are sacrosanct are men? In a statement on the budget, the University of Wisconsin System women's studies consortium notes that union membership is crucial for a working woman's advancement: it not only raises her wages by as much as a year of college but improves her chances of having healthcare even more than earning a college degree would have done, and gives her a measure of job security and a voice in the conditions of her work. Apparently Governor Walker thinks only men deserve those things. After all, this is a man who wants to repeal the state law requiring health insurers to cover birth control, eliminate the Title V family planning program, cut funding for sexual assault victims services and even reduce funding for a pregnant women's smoking cessation program — oh, and eliminate Badgercare, the state healthcare plan, for 55,000 families a bit over the poverty line.

In state after state, the same gender dynamic is shaping budget cuts. In fact, this is also happening in Britain. The Fawcett Society, a women's rights group, brought (and unfortunately lost) a gender discrimination lawsuit against the government, claiming that the cuts "risk rolling back women's equality in the U.K. by a generation." It's not such a stretch to think that's what may happen here.