Accessibility links
Can 'Limited' U.S. Engagement In Libya Stay Limited? President Obama has suggested that U.S. military involvement in Libya would be short-lived. But events on the ground and past experience suggest that the U.S. commitment may take more time and treasure than initially hoped. 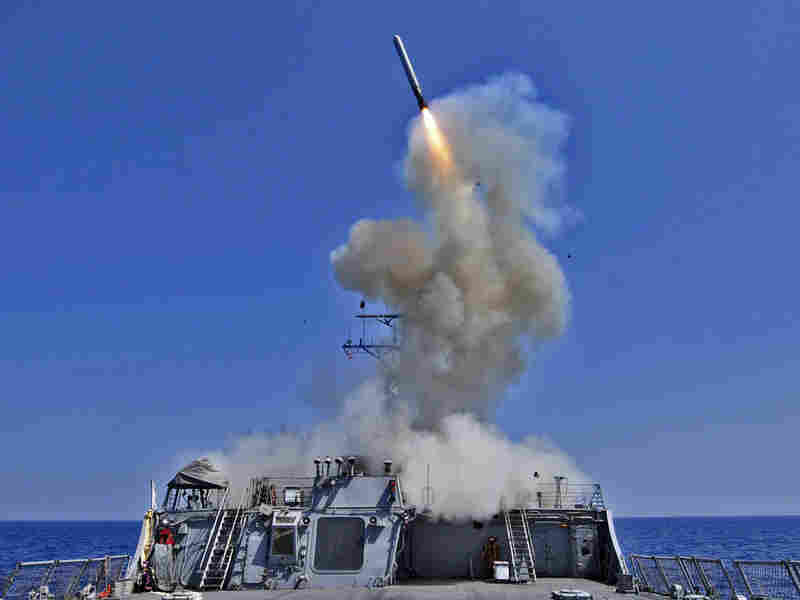 President Obama's initial hopes that U.S. military action in Libya would be over in a matter of "days, not weeks" have already been dashed.

How long will it take?

There are many political forces that make it difficult — once the U.S. military is involved actively in another country — to pull out quickly.

"The notion that you can put a toe in the water and not become more deeply involved when you have the overwhelming resources in the region seems sort of unlikely," says Micah Zenko, a fellow at the Council on Foreign Relations.

The Obama administration has been clear that there are limits to the amount and kind of resources it is willing to devote to Libya. Defense Secretary Robert Gates insisted in congressional testimony last week that no ground troops would be sent there while he remains on the job.

The U.S. agreed Sunday to a NATO request for a 48-hour extension of American participation in coalition airstrikes in Libya. Such participation is now set to expire Tuesday.

But even if U.S. involvement does not escalate, the military may be called upon to counter forces loyal to Libyan leader Moammar Gadhafi for some time to come.

"It's very easy to say we'll get in and out quickly, and that almost never happens," says Alan Kuperman, a University of Texas professor of public affairs. "The ultimate scope of things is a lot bigger than we think it's going to be when we go in."

The United States has fought a number of "limited" conflicts since the end of the Cold War. Libya is unlikely to escalate into a broader war in the way that, say, Korea and Vietnam did, outside observers say.

Gadhafi does not have the support of his neighbors, so they are unlikely to be drawn in. He also lacks a superpower patron who might send proxies to fight on his behalf.

The notion that you can put a toe in the water and not become more deeply involved when you have the overwhelming resources in the region seems sort of unlikely.

Micah Zenko, a fellow at the Council on Foreign Relations

But the war in Libya, even if it doesn't get bigger, could take more time and resources than the administration hopes. Now that the U.S., along with NATO and other allies, is involved, it's difficult to see a scenario under which Western forces can pull out quickly and gracefully, outside observers suggest.

Obama insists that Gadhafi is not a military target. But having made the case that Gadhafi is a ruthless dictator, it will be difficult to express satisfaction if he holds on to power.

"To sell the intervention, you've had to demonize the bad guys," says Barry Posen, who directs the security studies program at MIT. "Now, if you fail to deal with those demons you've created, you look foolish and feckless."

A continuing stalemate also might deprive the U.S. of an occasion to leave.

"If we find ourselves in a stalemate in Libya, there will be powerful pressures on the Obama administration to do more to assure victory," says Daryl Press, a government professor at Dartmouth College.

And if there is either a standoff or a messy reconstruction period after Gadhafi's defeat, there will be pressure on the U.S. to help referee the process.

"I can't see how there's not going to be some international ground presence in Libya down the road," says Kuperman, the Texas professor. "It will not be U.S. boots on the ground, but it will be U.S. dollars on the ground, and U.S. aircraft and intelligence and a lot of the stuff only we can do."

It's become a cliche that while it's easy to start a war, ending one is hard. Press suggests that this is a remnant of Cold War thinking, when the U.S. had to demonstrate its resolve in every minor conflict to convince the Soviets of its fortitude. 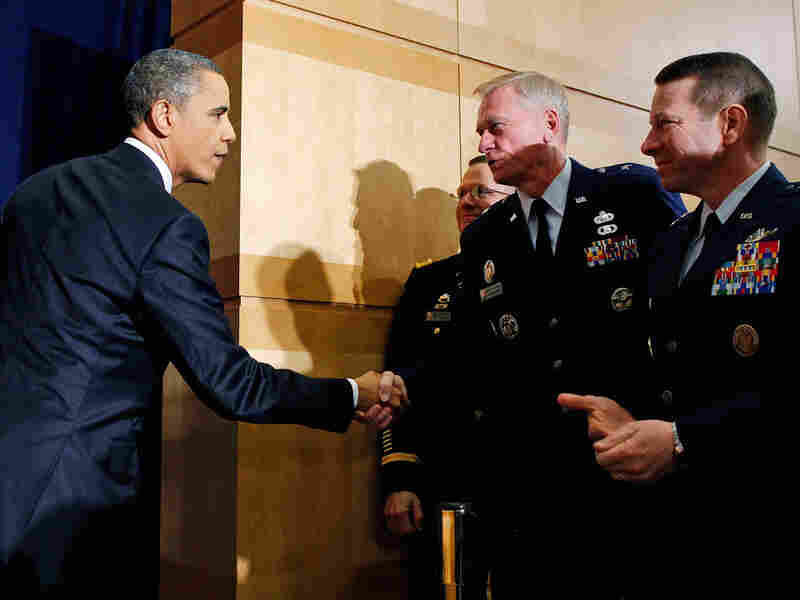 "One of the most strongly held views in American foreign policy is that any sort of defeat or backtracking or withdrawals will have great, adverse consequences for U.S. foreign policy more broadly," Press says. "It leads to doubling down, intransigence and a much more rigid foreign policy."

But escalations don't just happen automatically, argues Michael Desch, who chairs the political science department at Notre Dame. Leaders can calibrate their response to events on the ground, he says.

"There are plenty of examples of wars that escalated in the past," Desch says, "but also lots of cases where we've stepped back from the brink."

Making Libya "perfect" is a recipe for staying there forever, Desch says. But that doesn't have to be the end goal for the U.S.

"I think it would be a very easy case to make, that if we send Gadhafi packing, to say we've done our bit and now it's time for other countries, the Arab World and Europe, to take over, and for the Libyan people to being what only they can do and rebuild their country," Desch says.

The Tyranny Of Sunk Costs

But Posen, the MIT professor, argues that once the U.S. is involved in conflicts abroad it has a hard time extricating itself. He draws an analogy to the gambler who, once he starts losing money, puts more money into the pot in hopes of being made whole.

"If you go into one of these conflicts with the notion that you can achieve a certain end for 50 bucks, are you also saying you're going to limit yourself to 50 bucks?" Posen says. "Or it is one of these situations where you're in and you keep chasing your losses because the larger objective assumes such political salience for you that you can't back out?"

It has often happened that leaders seek to convince the public that a conflict will end cheaply and quickly, but once the fighting starts, reasons to keep fighting keep emerging, Kuperman says. The sacrifice of the fallen must be honored, or domestic and international politics press for continued engagement.

In earlier humanitarian interventions, such as Somalia and the Balkans, what started as attempts to provide food or safe havens led to broader efforts to change political dynamics on the ground.

In Afghanistan and Iraq, the U.S. had more ambitious plans from the outset, having gone in with the specific goals of overthrowing the Taliban and Saddam Hussein. In both cases, regime change happened quickly, but U.S. forces remain on the ground several years later in hopes of fostering political stability and rooting out terrorists.

No one expects the U.S. to make the kind of commitment to rebuilding Libya that it has made in Iraq or Afghanistan. Nevertheless, some analysts are predicting that fighting in Libya could drag on not for months but years.

"We should have some skepticism that the folks who tell us we can win for 50 bucks really mean it," Posen says. "They know that once the power and credibility of the U.S. are engaged, you're going to be able to reach deeper into the wallet."