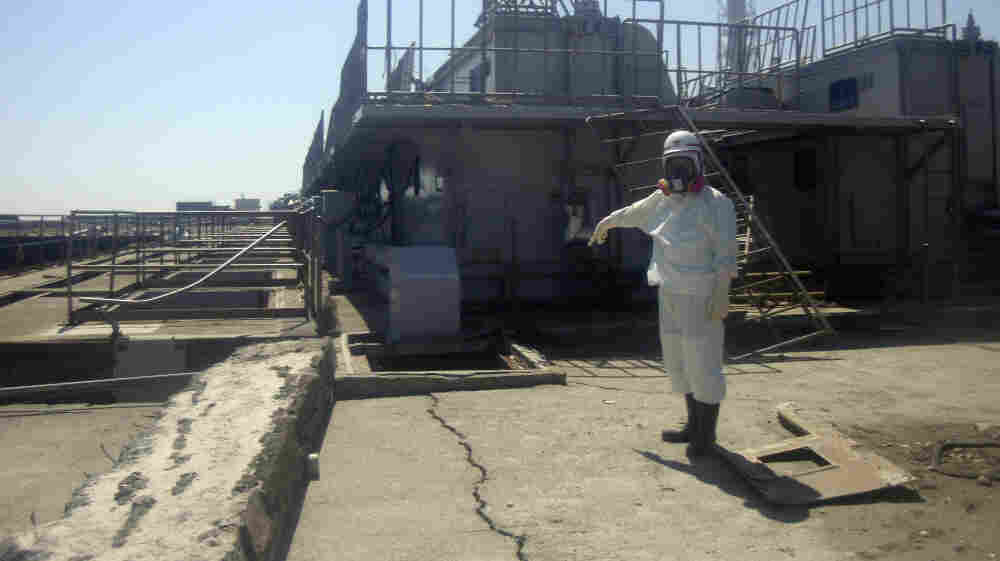 A TEPCO employee points at a crack discovered April 1 in a maintenance pit on the edge of the Fukushima Dai-ichi nuclear nuclear power plant in northeastern Japan. AP hide caption 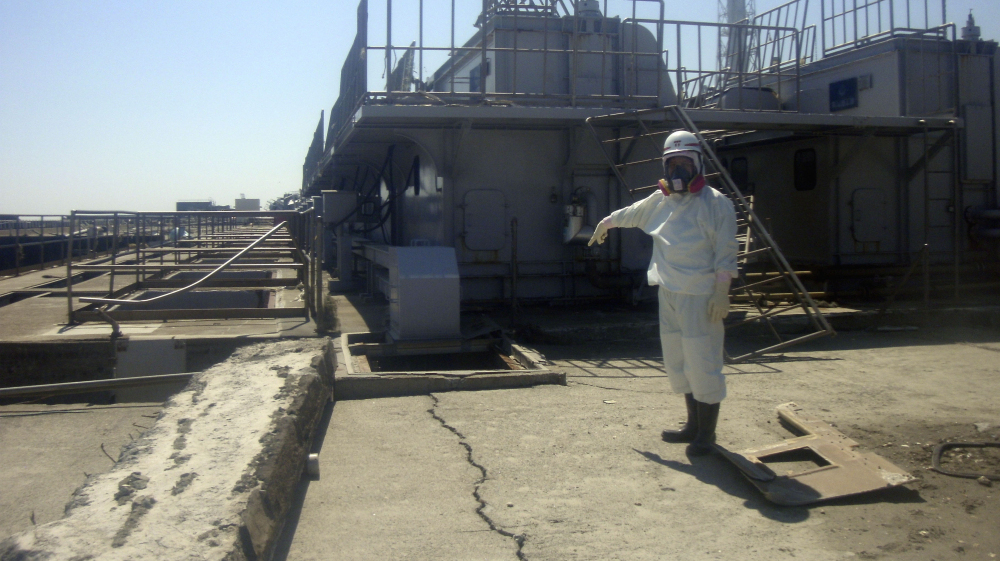 A TEPCO employee points at a crack discovered April 1 in a maintenance pit on the edge of the Fukushima Dai-ichi nuclear nuclear power plant in northeastern Japan.

Tokyo Electric Power Co. says the release of the water, which has radiation levels above the legal limit, is necessary to bring the Fukushima Dai-ichi nuclear reactors fully under control.

Most of the radioactive material in the water is iodine-131, which will essentially decay away to nothing in the next few months. Japanese officials apologized for the move, but they hope the maneuver will allow them to contain more severely contaminated water they also have to contend with.

The move, which has been described by Chief Cabinet Secretary Yukio Edano as an "unavoidable" step, will clear space in a waste storage building for water that is even more highly contaminated than the dumped water.

For weeks now, workers have been dumping tons of water onto the crippled reactors in an effort to keep their nuclear fuel from overheating. That water has been pooling in tunnels, basements and pits at the plant, and much of it contains radioactive elements.

Officials say the water must be disposed of before the normal cooling systems can be brought back on line, and intentionally draining some of it into the ocean is the best option, NPR's Joe Palca reports from Tokyo. At the same time, workers are trying to stanch an unintentional leak of contaminated water from one of the reactors at the plant.

An additional 1,500 tons will be dumped into the ocean from a trench under the plant's Units 5 and 6. That water is threatening to interfere with operations at those units, whose reactors have been in cold shutdown since March 11 .

Contaminated water has been leaking from the plant for more than a week; workers still haven't pinned down its source.

A Japanese nuclear official said Monday that workers are trying to trace the path of the leak using a milky white dye made from salts. The dye has yet to appear in the ocean.

"We still have not heard that the white-colored bath solution is flowing out of the unit into the sea," Hidehiko Nishiyama, spokesman for the Nuclear Safety and Industrial Agency, told the media in Tokyo.

Over the weekend, workers found a crack in a maintenance pit near the water's edge and tried to clog it with a special polymer, sawdust and even shredded newspapers. But contaminated water continued to leak into the ocean; Nishiyama said the water might be traveling through other possible passages.

The crack is just the latest in a long string of setbacks that workers have experienced in trying to get the nuclear plant back under control. The crisis at Fukushima was set off by the magnitude 9.0 earthquake and tsunami that struck Japan on March 11.

Following Monday's announcement of the intentional releases of radioactive water into to the ocean, Edano said the dump should not affect the safety of seafood in the area. That's because radioactivity is quickly diluted in the ocean and some of the radioactive isotopes will decay in just eight days.

The airborne radiation releases from the plant have also contaminated some of the farms in the region. While not immediately harmful to human health, officials continue to find levels of radioactive cesium and iodine in vegetables from these farms that exceed safety limits.

Despite requests from farmers, the Japanese government says it's too soon to allow food produced near the damaged Fukushima power plant back on the market, Palca reports.

With reporting by NPR's Richard Harris and Joe Palca in Tokyo. Material from The Associated Press was used in this report.