Accessibility links
The Nation: Can Obama '12 Recapture The '08 Magic? On Monday, President Obama announced he would be running for re-election in 2012. Ari Berman of The Nation argues that it will be an drastically different campaign from the grassroots spirit of 2008, mostly due to Obama's new campaign manager, Jim Messina. 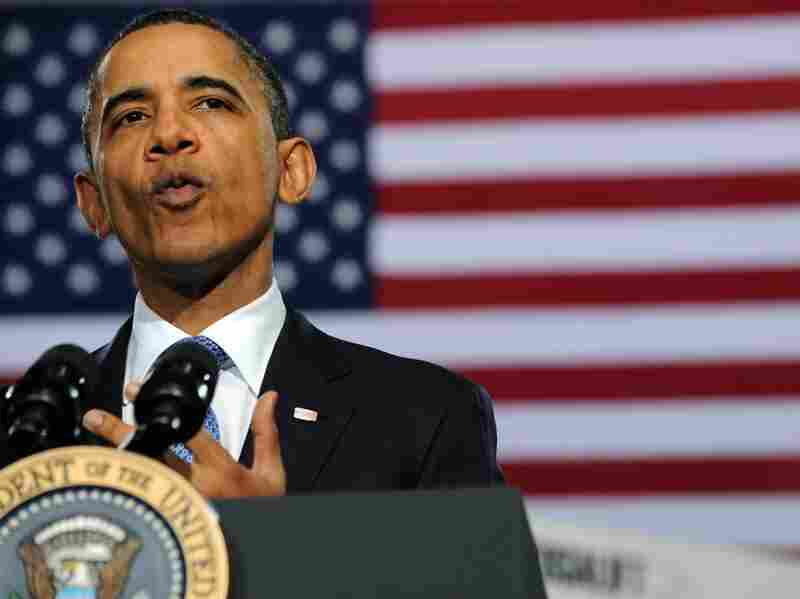 President Barack Obama speaks to employees of AT&T, PepsiCo, UPS and Verizon in Landover, Maryland. On Monday, Obama formally announced his 2012 re-election bid, saying the country needs "to protect the progress" it had made. Jewel Samad/AFP/Getty Images hide caption 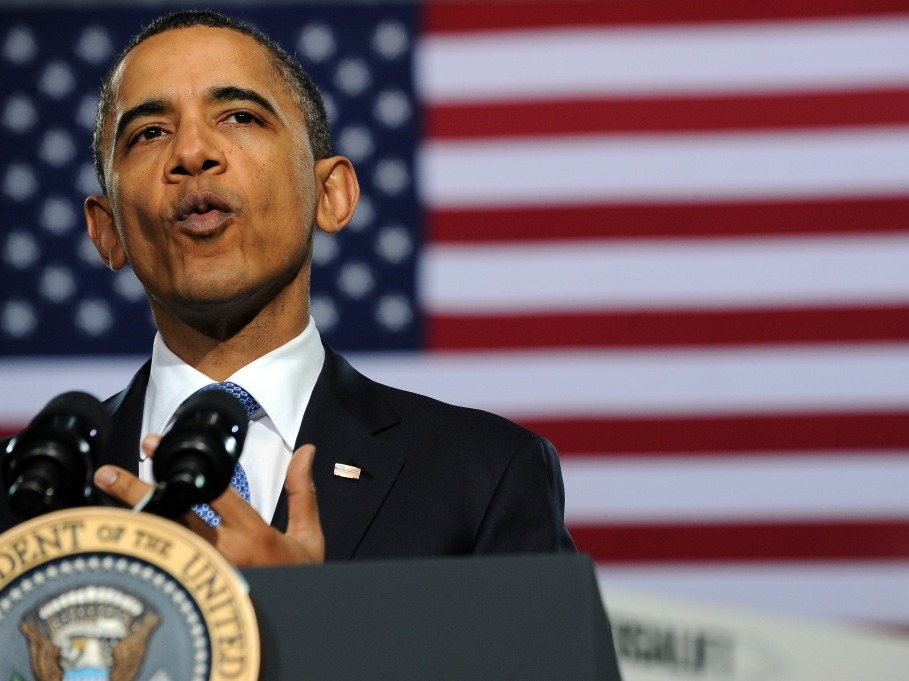 President Barack Obama speaks to employees of AT&T, PepsiCo, UPS and Verizon in Landover, Maryland. On Monday, Obama formally announced his 2012 re-election bid, saying the country needs "to protect the progress" it had made.

In the midst of two-and-a-half wars, a prolonged recession and a possible government shutdown, Barack Obama officially kicked off his re-election campaign on Monday. It wasn't the most auspicious moment, and the low-key video the president sent in an e-mail to his supporters was a far cry from that dramatic announcement speech in Springfield, Illinois, in February 2007, when the upstart candidate invoked the idealism of Lincoln to begin his unlikely journey to the White House.

Obama's video featured interviews with his grassroots supporters, who formed the remarkable core of his 2008 campaign, but have not exactly been a top priority for the White House since. "Politics is at the grassroots level," says Katherine in Colorado. "It's individuals talking to other individuals and making a difference." Yet the video didn't really emphasize the actual practice of grassroots organizing, such a big part of Obama '08, and the words hope or change were not even mentioned. Those days, it seems, are over. The Democrats' message in 2010 was: "We're not as bad as those other guys," which didn't exactly inspire Obama supporters to rush to the polls. Obama kicked off his re-election campaign on Monday only to get a jump-start on raising money, mostly from wealthy donors. It's not clear yet how the grassroots organizers featured in this video will figure into the overall strategy of his campaign. And oddly, the video didn't mention Obama's record as president or legislative accomplishments, which one presumes will form the backbone of his re-election effort.

So how might the Obama '12 campaign differ from Obama '08? I examined that question in my new Nation profile of Obama campaign manager Jim Messina, "Obama's Enforcer." Here are a few relevant excerpts:

Unlike [David] Plouffe, who became a revered figure among Obama supporters, Messina begins the re-election campaign with a significant amount of baggage. As a former chief of staff to Baucus and deputy to Emanuel, Messina has clashed with progressive activists and grassroots Obama supporters both inside and outside Washington over political strategy and on issues like healthcare reform and gay rights, alienating parts of the very constituencies that worked so hard for Obama in 2008 and that the campaign needs to reinspire and activate in 2012. Obama's fixer has arguably created as many problems as he's solved. "He is not of the Obama movement," says one top Democratic strategist in Washington. "There is not a bone in his body that speaks to or comprehends the idea of a movement and that grassroots energy. To me, that's bothersome."...

Under Messina, Obama '12 could more closely resemble the electoral strategy of Baucus or Bill and Hillary Clinton — cautious, controlling, top-down in structure and devoted to small-bore issues that blur differences between the parties — than Obama '08, a grassroots effort on a scale modern politics had never seen. "It was a major harbinger to me, when Obama hired him, that we were not going to get 'change we can believe in,'" says Ken Toole, a former Democratic state senator and public service commissioner in Montana. "Messina has a lot of talents, but he's extremely conservative in his views on how to do politics. He's got a tried-and-true triangulation methodology, and that's never gonna change."...

Messina has spent his early days as campaign manager meeting with wealthy Obama megadonors on a "listening tour." ... The Obama campaign hopes Messina's connections will come in handy as it tries to amass a $1 billion war chest for 2012; Messina has already asked Obama's finance committee to raise $350 million by the end of this year. But early indicators signal that Messina's task won't be so easy this time around. Corporate America no longer regards Obama as an ally, while many donors from 2008 are disillusioned with the administration's legislative compromises and political timidity....

Even as Messina jet-sets around the country, huddling with big donors, will the campaign cultivate the small donors and grassroots activists who powered and shaped the '08 Obama campaign? On February 1 Politico's Mike Allen reported that "Obama's political operation is quietly using the afterglow of his State of the Union address to begin activating grassroots supporters as the start of a continuous wave of engagement that will culminate when he stands for reelection on Nov. 6, 2012." As part of the effort, OFA offered T-shirts to activists featuring a tag line from Obama's speech: "We do big things." The article provided a revealing glimpse into the campaign's early strategy for 2012 — woo wealthy donors and sell T-shirts to the masses....

In certain ways, it's easier to start a campaign as a blank slate. In 2007 Plouffe was not a particularly unconventional thinker, but because he was facing the Clintons, the Obama campaign wisely decided to experiment with innovation and cede some control to grassroots supporters, integrating bottom-up politics into the strategy of the campaign's upper brass. Obama's advisers knew that if they simply ran a second-rate version of the Clinton campaign, they would lose. But now that Obama is the establishment candidate, it's unlikely he'll follow the same playbook that worked so well in '08 — or will even be able to. Regardless, that's not how Messina operates. "Clearly they want to recapture the magic, which is going to be very hard for them," says Roger Hickey of the Campaign for America's Future. "It's hard to get excited about a guy who's constantly compromising, especially if unemployment stays above 8 percent."