Accessibility links
Plans For World's Most Powerful Rocket Unveiled The Falcon Heavy will be able to carry about twice as much weight as a NASA space shuttle can take to orbit, the private rocket company SpaceX says. Unveiled Tuesday, the Heavy could carry up satellites or spacecraft, but it was designed with features that mean it could someday be used for human spaceflight missions as well. 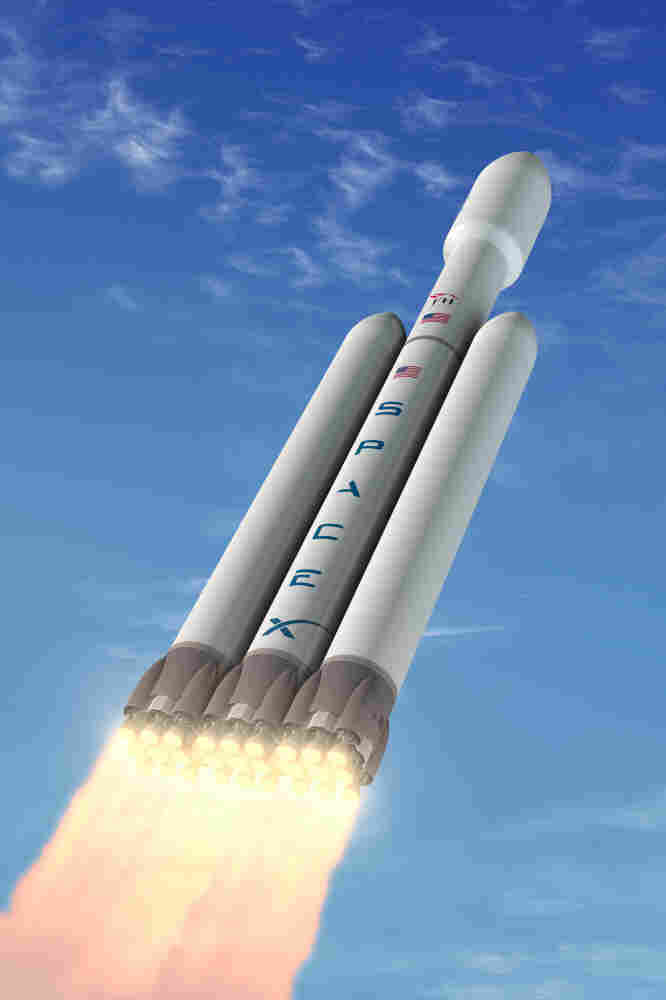 An artist's depiction of the Falcon Heavy rocket. SpaceX, the private company behind the rocket, says it will be able to carry about 117,000 pounds into orbit — about twice as much as a space shuttle. SpaceX hide caption

The private rocket company SpaceX says its next rocket will be the most powerful in the world.

The new rocket, called the Falcon Heavy, is designed to carry up to about twice as much weight as a NASA space shuttle can take to orbit. It's expected to be at the launchpad at the end of next year for its first flight, with the launch likely coming in 2013.

SpaceX CEO Elon Musk described his company's new rocket during a press conference in Washington, D.C. He says it will be able to take about 117,000 pounds to orbit.

"So that is really, really humongous," says Musk. "It's more payload capability than any vehicle in history, apart from the Saturn V."

The Saturn V was NASA's moon rocket and was decommissioned after the Apollo program ended. Musk said the Falcon Heavy has about half the lifting capability of the Saturn V.

"So in principle, you could do another mission to the moon, just by doing two launches of a Falcon Heavy," says Musk. He also described possible missions to an asteroid, or an unmanned mission to collect samples of rocks from Mars and return them to Earth.

SpaceX is one of a number of companies that have been angling to carry cargo — and someday, astronauts — for NASA now that the space shuttle is being retired this year.

SpaceX has already had two successful flights of its smaller Falcon 9 rocket and successfully returned its Dragon space capsule from orbit. Musk says the Falcon Heavy has also been designed with NASA's standards for human spaceflight in mind. Each launch of the Falcon Heavy will cost $80 million to $125 million.

"Although the space shuttle is, obviously, retiring this year," says Musk, "I think this is something that America can be really proud of, the fact that there's actually going to be a vehicle with twice the capability of the space shuttle, that's going to be ready to launch at the end of next year."