Accessibility links
Novice Politician, Pop Star Haiti's President-To-Be Michel Martelly, who is also known as Sweet Micky, has never before held political office. A year ago, the pop musician's campaign was considered by many Haitians to be a long shot, a publicity stunt or a joke. Now Martelly is poised to lead a nation still struggling to recover from the 2010 earthquake. 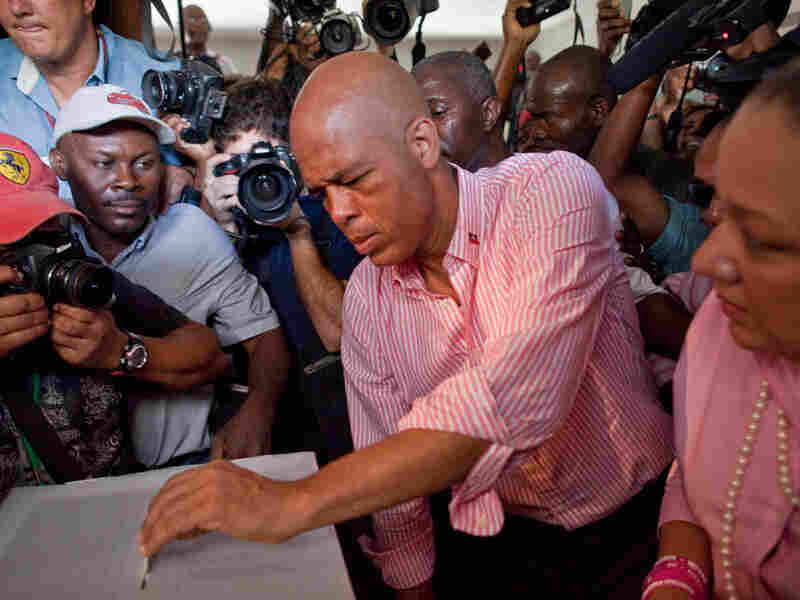 Then-candidate Michel Martelly casts his ballot at a polling station during a presidential runoff in Port-au-Prince, on March 20. Ramon Espinosa/AP hide caption

More than four months after Haiti first held presidential elections, the country finally appears to have a new leader.

Michel Martelly won 68 percent of the vote in the March 20 runoff, according to preliminary results released Monday night.

Martelly, who is also known as Sweet Micky, has never before held political office. A year ago, the pop musician's campaign was considered by many Haitians to be a long shot, a publicity stunt or a joke. Now Martelly is poised to lead a nation still struggling to recover from the 2010 earthquake.

It won't be so hard for Martelly to get used to being called "president." As one of Haiti's most popular musicians, "president" has been one of Martelly's nicknames for years.

Martelly had a reputation as the party boy of the Haitian music scene. The bald singer would perform in women's clothing. Sometimes he'd take to the stage in a diaper.

At a campaign rally, Martelly dressed in a formal business suit, explained that Sweet Micky, the entertainer, and Michel Martelly have always been two very different people.

"Sweet Micky was the drunk man onstage, crazy," he said. "But Michel Martelly went home with the money. He took care of his family. Sent his kids to college. And is very satisfied with his life."

He, however, wasn't satisfied with the election in November. While the polls were still open, Martelly and 11 other presidential candidates held a press conference to declare the voting a fraud. They said they wouldn't participate in the process.

Later, Martelly backed away from this stance when it became clear that he was one of the top vote earners. Then, when election results were released in December stating that Martelly had been eliminated from the race, his followers rioted in the streets and shut down the Haitian capital for days.

Richard Widmaier, the head of Radio Metropole in Port-au-Prince, said that even a few months earlier Martelly hadn't been viewed as a significant candidate in the race.

"The Martelly phenomenon is quite interesting," he said.

Widmaier said Martelly rapidly managed to tap into Haitians' deep frustration with the slow pace of the recovery from the January 2010 earthquake. And Martelly also repeatedly stressed that things were better in Haiti 20 years ago.

By this, Widmaier said, Martelly is harking back to the era of the dictatorship of Jean-Claude "Baby Doc" Duvalier.

"He never used the word or name of Duvalier but always refers to the past, saying 20 years ago, our country was not like that," he said. "Now if I want to send my son to the movie, I have to send him to the Dominican Republic or Miami, because we don't have a cinema here in Haiti. Using these words, I think the people can hear him; that's why he became so popular."

Haiti, however, has proved throughout history to be a tricky country to govern. There's a long line of former Haitian rulers who have been overthrown, assassinated, died mysteriously in office or forced into exile. And Martelly will be taking over the country at a particularly difficult time. Much of the capital was destroyed in last year's earthquake; the cholera epidemic continues; and Haiti remains the poorest country in the Western Hemisphere.

In his coming term as president, Martelly may even look back nostalgically to his former career as a singer.