Accessibility links
The Nation: Kloppenburg Reflects Spirit Of Wisconsin As of Wednesday morning, the Supreme Court election race between Justice David Prosser and challenger JoAnne Kloppenburg is too close to call. John Nichols of The Nation argues that these tentative results show that a there is a different kind of political scene emerging in Wisconsin as a reaction to Gov. Scott Walker. 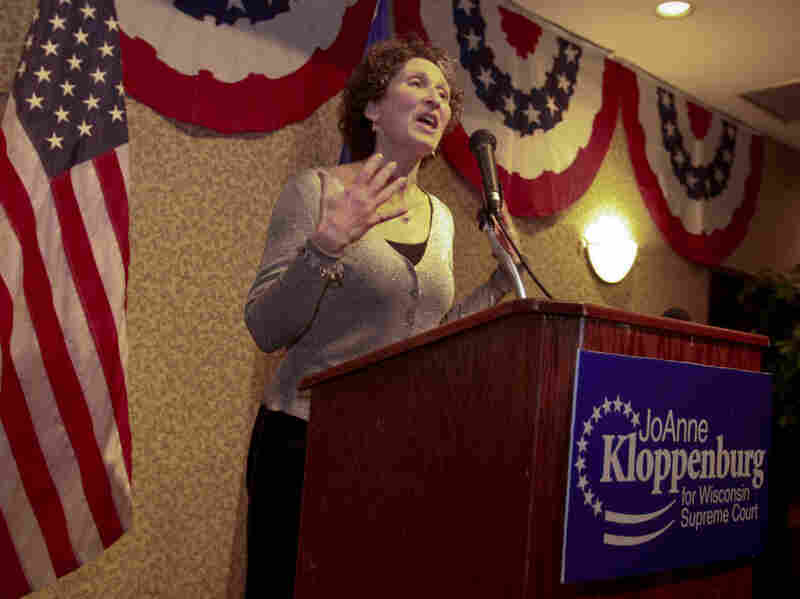 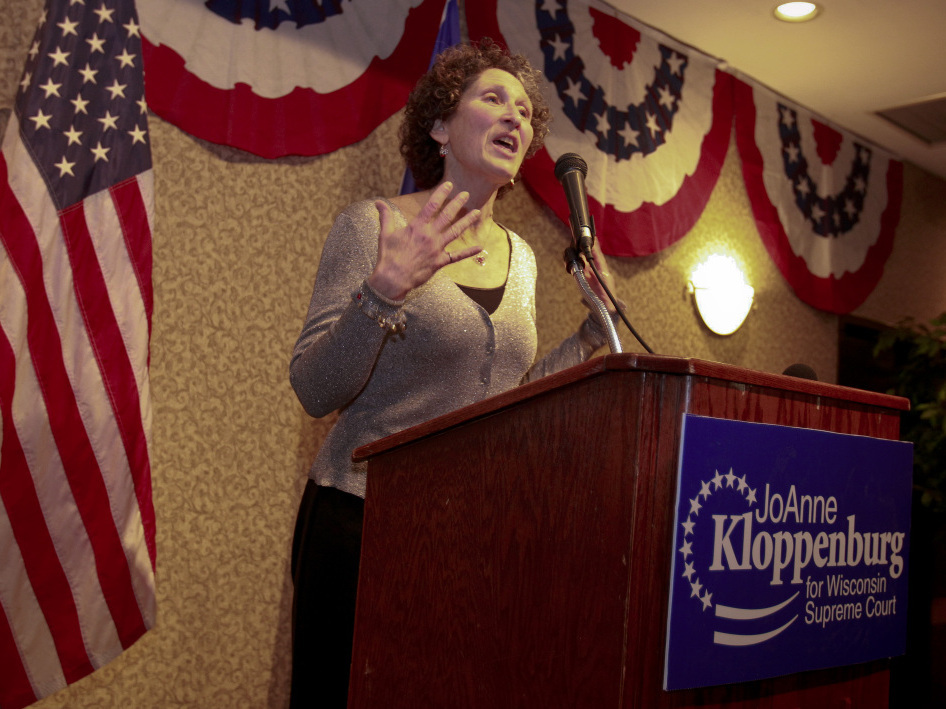 Wisconsin Supreme Court candidate JoAnne Kloppenburg, addresses her supporters in Madison on Wednesday. The race between Kloppenburg and incumbent Justice David Prosser was announced as too close to call.

John Nichols writes about politics for The Nation magazine as its Washington correspondent.

Unknown sixth months ago, unviable six weeks ago, first-time candidate JoAnne Kloppenburg has wrestled a senior justice on the Wisconsin Supreme Court to an electoral tie. And in so doing she has opened a remarkable new chapter in the story of the political uprising that began when Republican Governor Scott Walker launched his assault on public employee unions, public schools and local democracy in Wisconsin.

As a member of the 4-3 conservative majority on the high court, Prosser was positioned to secure the major endorsements, enjoy the support of free-spending special interest groups and dominate the race. In the mid-February primary, which came just days after Walker announced his anti-union project, Prosser defeated Kloppenburg by 30 points.

But on the same night that Prosser was coasting to that primary victory, one of the first major demonstrations against Walker's bill drew 8,000 people to the state Capitol in Madison. Those numbers grew to 20,000, to 50,000, to 80,000, to 100,000 and ultimately to 125,000 at a mass rally several weeks ago. The Wisconsin movement became a national and, ultimately, an international phenomenon.

Slowly, it began to dawn on the protesters that the April 5 Supreme Court election was an opportunity to mount not only protests in the street but protests at the polls.

Handmade "Kloppenburg" signs began to appear at the rally. The candidate, an assistant attorney general, was running a campaign with such a low budget that it could not afford printed signs, so her supporters made their own.

They also started to expose Prosser as a rigid partisan who had brought his Republican politics to what is supposed to be a nonpartisan bench. A former leader of legislative Republicans who served as Assembly Speaker and mentored a young legislator named Scott Walker, Prosser's reelection campaign had begun with an announcement that he planned to make the court a "complement" to the Walker administration and Republican majorities in the state Assembly and Senate.

Kloppenburg promised to serve as an independent jurist who would uphold the rule of law, rather than promote the governor's agenda. That was more than enough for the unions and their allies, which embraced the Kloppenburg campaign — along with the hope of grabbing majority control of the court away from Walker-allied conservatives...

Her candidacy became a focus of the movement that had developed to oppose Walker's agenda and, as Election Day approached, the impossible run began to look like the real thing. Prosser still had all his advantages, but Kloppenburg had the masses. Outside groups poured money into the contest, with the majority of it going to Prosser, a Tea Party favorite endorsed by Sarah Palin. But Kloppenburg had plenty of support, especially at the grassroots, where the handmade signs went up all over the state.

Her campaign became an electoral extension of the protest movement. Everyone in Wisconsin — and a lot of folks nationally — began to talk of the April 5 court contest as the first real "referendum" on Walker's policies.

And the referendum process is ongoing.

Early Wednesday morning, Kloppenburg appeared before her tired yet enthusiastic supporters in the ballroom of a Madison hotel to announce, "It's not over yet!"

She could not be more right.

Out of roughly 1.5 million votes cast in a record turnout for a judicial race of this sort, Prosser led Kloppenburg by just 585 votes.

99 percent of the ballots had been counted. But several dozen precincts had yet to report, and most of them were in counties Kloppenburg had won.

The closeness of the contest all but assures that, no matter which candidate secures a marginal lead, a full recount will be conducted.

Under Wisconsin law, the costs of a recount are paid by the state if the margin of different between the two candidates is less than 0.5 percent of the vote. That is certain to be the case in this contest.

So, Kloppenburg remains very much in contention.

She could yet secure a majority.

And even if Prosser comes out slightly ahead, she has every right — and, indeed, a responsibility, to demand a recount.

Kloppenburg deserves credit for her unprecedented accomplishment. She ran a tremendous race.

But credit is also due to the movements that came from the streets to the polling places and turned an also-ran candidacy into a serious prospect.

That prospect remains real and viable.

Kloppenburg and Prosser will wait for the final totals.

Those results will show a virtual tie.

Then, the candidate who trails will demand a recount.

There could be weeks, even months of wrangling over ballots and counts. But one result has already been confirmed: The referendum on Walker's policies has sent an important signal. When a candidate who is not given a chance ties a senior justice on the state Supreme Court, when a newcomer ties one of the most entrenched political players in the state, and when these results can be linked to fury at a governor's policies, that governor has nothing to celebrate. Something is changing in Wisconsin. A new politics is taking shape. And JoAnne Kloppenburg has been a beneficiary — along with the battered but unbeaten state of Wisconsin.