Accessibility links
In Wake Of Nuclear Crisis, TEPCO's Plans Questioned Experts say that in the weeks following the series of explosions and fires inside the reactors at the Fukushima Dai-ichi power plant, TEPCO made very costly — and avoidable — mistakes. The company, they say, was deeply surprised and overwhelmed by the course of events. 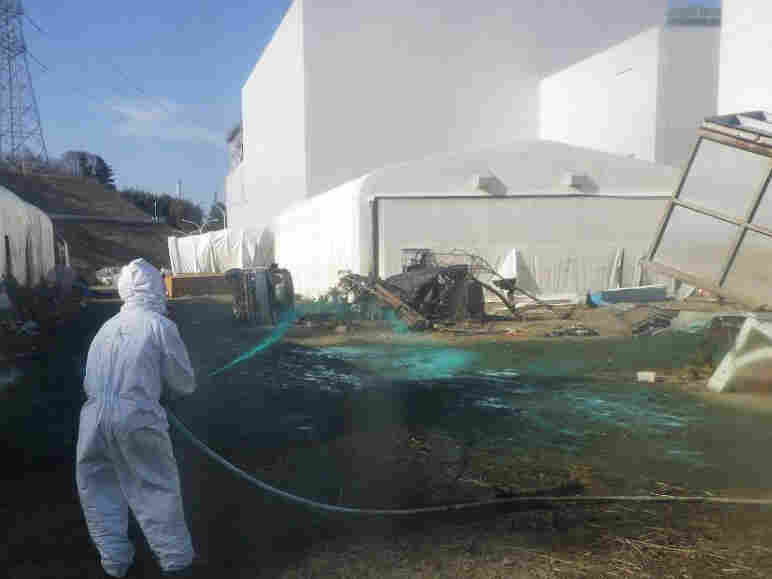 TEPCO workers spray synthetic resin over the ground at the plant to prevent radioactive dust from spreading beyond the premises. AP hide caption 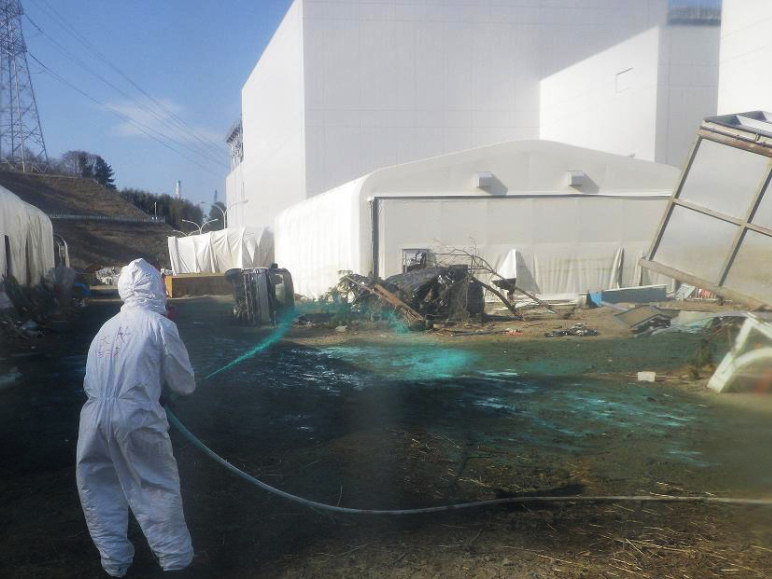 TEPCO workers spray synthetic resin over the ground at the plant to prevent radioactive dust from spreading beyond the premises.

More than three weeks after an earthquake and tsunami set off one of the world's most serious nuclear accidents, at Japan's Fukushima Dai-ichi plant, experts are intensifying their scrutiny of how the plant operator, Tokyo Electric Power Co., has handled the crisis.

Some events TEPCO couldn't have foreseen — such as the massive size of the tsunami that swamped the coastal facility. But nuclear experts say that in the days following the initial series of explosions and fires inside the reactors, which caused fuel rods to melt and subsequent large releases of radiation, TEPCO made very costly — and avoidable — mistakes.

The company, they say, was ultimately surprised and overwhelmed by the chaos created by the tsunami. And its poor coordination of the response may have helped prolong the crisis.

"We're three weeks into this and this thing should be more under control than it is," said Matthew Bunn, a professor and the co-principal investigator of the Managing the Atom Project at Harvard University's Belfer Center for Science and International Affairs. "It seems that everyone at TEPCO is running around as fast as they can, trying to do what they can, but it doesn't seem the tests and exercises of emergency plans were there that should have been there."

Experts like Bunn say that the limited and often conflicting information that TEPCO has made available about the events at the plant has also raised questions about its decisions.

"Everyone agrees getting reliable info has been very, very difficult," Bunn noted. That has heightened the sense of uncertainty both about how bad the situation at the plant is and about TEPCO's competence in managing each new risky development.

'The Tragedy Is That It Was A Preventable Accident'

The situation at the plant remains precarious and is likely to take months to get fully under control. But there also are signs that a full meltdown is unlikely: The reactor cores and spent fuel pools that contain the dangerous rods are staying cool and workers on Wednesday finally stopped a worrisome leak of radioactive water.

That water leak was just the latest in a long series of setbacks to stabilizing the plant. Experts say some of those challenges — such as the giant tsunami triggered by the March 11 quake — would have been difficult for TEPCO to anticipate.

Matthias Braun, an engineer with the French firm AREVA who created a widely circulated technical PowerPoint presentation about the crisis at Fukushima, points out that the plant was designed to withstand a tsunami with a height of up to 18 feet. The actual tsunami that hit was considerably bigger — over 46 feet, according to TEPCO.

The huge wave overwhelmed the plant's emergency power systems. It swamped the backup diesel generators, which were stored at sea level, not on higher ground.

Electricity is critical for moving water through the plant's cooling system, which keeps the heated fuel rods containing radioactive material stable and safe. Once the plant was without power for several hours, the reactor cores and spent fuel ponds began to heat up, and the water levels inside them dropped. Eventually, the rods were fully or partially exposed in Units 1 through 4. As the rods melted, zirconium in the casing around the fuel was released, producing hydrogen, which built up and caused the damaging explosions and fires that occurred between March 12 and 16.

But as John Ritch, the director general of the World Nuclear Association, an industry group, notes, TEPCO was following Japanese nuclear regulations set by Japan's Nuclear Safety Commission. Its most recent guidelines from 2006 say that plants must be designed "not to have their safety greatly compromised by tsunami, which can be expected, no matter how rare." But specifics on what kind of tsunami to prepare for are more vague.

"The flaw at Fukushima was that worst-case tsunami predictions were exceeded, and Japan's regulatory standards for backup cooling systems didn't enable the Dai-ichi plant to withstand the flooding," said Ritch. "The tragedy is that it was a preventable accident."

'The Right Questions Weren't Asked Ahead Of Time'

But once the fuel rods began to melt inside the reactors and the spent fuel pools, and large quantities of radiation began escaping into the environment, TEPCO was faced with a full-blown crisis, and a whole new set of problems that have seemed to nudge each other over like dominoes.

Experts are finding fault with much of its handling of that crisis following the initial loss of emergency power.

They didn't have any big tools to help them. In a risky business, you need to be backed up, so you call the Army.

"It seems that the right questions weren't asked ahead of time, and people didn't know what they were supposed to do when the accident hit," said Bunn.

For starters, experts say the company waited too long to start pumping seawater into the cores. Some 27 hours passed before seawater was injected into Unit 1, while Units 2 and 3 went seven hours each before receiving the water. The company may have been weighing the consequences of its options, says Kinoshita Masahito, spokesman for the Japan Atomic Industrial Forum, because the seawater would permanently disable the reactors.

A lack of preparedness was also evident in the company's several botched attempts to dump water on the spent fuel pools at Units 3 and 4 on March 16 and 17 using water cannons, firetrucks and helicopters.

According to a former executive in the nuclear industry who has also worked on international nuclear safety issues, the overheating and burning of the spent fuel pools was completely avoidable.

"It's unbelievable," said the executive, who asked not to be named for fear of diplomatic repercussions. "You take a very simple issue like cooling spent fuel, for which you need only water — you need a crisis team sending in firetrucks. All you have to do is put water in a pool, and that's it."

The struggle to cool the pools showed the serious disorganization and lack of coordination between TEPCO, the government and the military, the executive said. And the delay in cooling the pools was a disastrous one — it caused fires and dangerous radiation releases.

"They didn't have any big tools to help them," he said. "In a risky business, you need to be backed up, so you call the army." Or in Japan, the Self-Defense Forces.

The following week, TEPCO reported that highly radioactive water was leaking out of another reactor, Unit 2. That soon created another quandary: where to store the contaminated water? It leaked into the ocean for several days while TEPCO hunted for the source of the leak.

Then the company said it was forced to release 10,000 tons of low-level radioactive water because it had nowhere else to put it. On Tuesday, radiation levels several million times the legal limit were measured in seawater near the plant, stoking fears about long-term contamination of seafood and other marine life.

"Dumping water into the sea may have been unavoidable as an emergency measure, but they're now at a crossroads where they have the opportunity to stop a vicious circle," Shojiro Matsuura, former chairman of the Nuclear Safety Commission, told the Daily Yomiuri newspaper. "They need to deal with the situation by making better forecasts."

Reprimanded For Mistakes In Radiation Readings

TEPCO has also irritated observers and the Japanese public by repeatedly failing to provide consistent and accurate radiation measurements around the plant.

Last week, the company misreported radiation readings twice by huge orders of magnitude. On March 27, TEPCO reported that radiation levels were 10 million times their normal level. The next day, the company was forced to revise the reading, saying that the level of radiation in reactor Unit 2 was "only" 100,000 times higher than the normal limit.

TEPCO's vice president, Sakae Muto, acknowledged the company's embarrassment and regret for the mistake. "We will increase the accuracy so that errors like this do not happen again," Muto told reporters.

But then it did happen again.

On March 31, TEPCO announced that it had found levels of radioactive iodine in groundwater at the plant that were 10,000 times higher than normal. Not long after making the statement, company officials said that reading might have been incorrect and would be reviewed. At the time, a government spokesman reprimanded the company, saying such mistakes were unacceptable.

Hidehiko Nishiyama, an official with Japan's Nuclear Industrial and Safety Agency, said that the "error in the radiation analysis undermines the credibility of TEPCO's assessments."

The utility said there were errors in the computer program it uses to analyze radioactive elements and their levels and that it would be reviewing the program.

Kai Vetter, a nuclear physicist at University of California, Berkeley, says he's not sure how TEPCO could commit such grievous errors, but that the company was under a lot of pressure to crunch numbers in a short period of time.

"They're doing thousands of measurements over the days, of different samples of soils, water and air," said Vetter. "There is certainly a possibility that you can make mistakes."

But Vetter also added that after three weeks, the data should be sufficient to make good assessments of radiation levels around the plant.

"When you interpret the measurements and factor in the uncertainties, mistakes shouldn't happen," Vetter said.