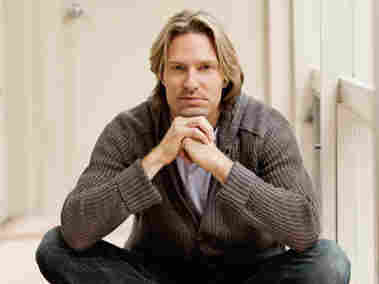 Eric Whitacre auditioned thousands of singers across the globe to perform his work virtually. Courtesy of the artist hide caption

Watch a video about the choir.

See Whitacre talk about his virtual choir at the TED conference.

American composer Eric Whitacre is a rock star in choral circles. His music is performed by amateur and professional choirs alike, his chiseled good looks have earned him a modeling contract, and, Thursday night, he unveils his Virtual Choir 2.0 on YouTube. It features more than 2,000 singers from around the world, including this reporter.

I've been singing in real choirs since I was a kid, so I was intrigued to participate in a virtual one. I recently asked Whitacre how he came up with the concept.

"Well, it all started with this video — a young girl named Britlin Losee, who was 17 at the time, posted to YouTube a video of herself singing the soprano part to a piece of mine called 'Sleep,' " Whitacre says.

This is what she said then:

"Hi, Mr. Eric Whitacre, my name is Britlin Losee, and this is a video that I'd like to make for you. Ever since I heard your song 'Sleep,' I have been addicted to your music. Music is my life, it is my heart, it is everything. And, um, you've touched me."

"I was just so moved by the way she was singing and the look on her face — she looked directly into the camera," Whitacre says. "And she had such a pure and sweet tone. It struck me: I thought, God, if I can get 50 people to do this all at the same time, from around the world, post their videos, and then we could cut them together, we could make a virtual choir."

So Whitacre experimented: He rounded up some singers, had them sing individually into webcams while listening to a piece of his on headphones, and had a technician cut the videos together. The experiment was so successful, Virtual Choir 1.0 was born; 185 singers from 12 different countries sang Whitacre's "Lux Arumque."

"My biggest hope," Whitacre says, "was that we'd be able to find some actual musical gestures — rubato, with slowing and speeding up of the tempo and dynamics, where we'd get people to sing very soft and more full in different places. And it really worked."

The video has been viewed almost 2 million times on YouTube. So, when Virtual Choir 2.0 was announced, I went for it. I downloaded my music, printed it out and got my instructions, via a YouTube video: "And now a few instructions for recording your track. First, make sure that your face is well-lit, nice and bright. Please make sure that your clothes are only black; no pictures, words or logos."

After a beep, I started to sight-read the piece and sing along with a piano track, while watching Whitacre conduct. It took me quite a while to get the hang of it — adjust to Whitacre's tempos, which were very loose, and respond to his gestures. And, of course, learn the notes. It was nothing like singing with a real choir, where you listen to the people around you, work on blending your voices together and breathe with them. But I practiced and practiced with that little piano track. And, a few days later, I recorded myself on video several times before I felt I got it right.

Whitacre knows it's a kind of strange process.

"There's this incredible leap of faith on the part of the singer," he says, "where you're just hoping, sort of, beyond hope, that somehow this works, right? That you'll do your little bit for this and then months later find out, 'Oh, OK, I helped make this happen.' "

When I finally saw and heard the video — with 2,051 singers from 58 different countries — I was convinced. I called Britlin Losee, the young woman whose video started the whole shebang. What was it like to inadvertently inspire the Virtual Choir?

"Amazing — I still can't even explain it," Losee said.

Eric Whitacre's Virtual Choir 2.0, featuring his piece "Sleep," makes its debut on YouTube Thursday night. You'll see the video, which features glimpses of Britlin Losee and me amongst the singers.